As a professional cyclist I spent the majority of my 16-year cycling career either racing or training with a purpose. Most rides were governed by a training goal, numbers to hit, and all part of a master plan. Do not get me wrong, I starting cycling because I love riding bikes, but this can get a little lost in the pressure of chasing results.

I stopped racing nearly seven years ago. Since then, the passion for cycling that I had when I first rode aged 12 has returned and I am discovering new challenges and events.

The highlight of the year was surely riding in the Maratona dles Dolomites gran fondo in July, my first mountain sportive. This will go down as the best road ride I have ever done!

A bold statement I know; so why was it so good? 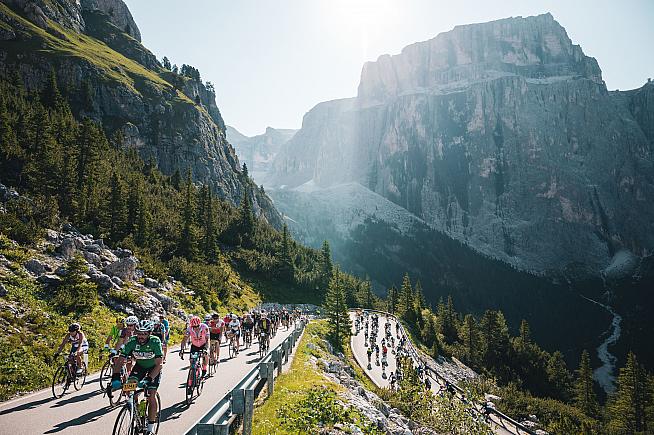 2019 saw the 33rd edition of the Maratona; in short, this is the daddy of gran fondos. This year a record 33,000 riders applied for 9,000 spaces. People want to ride so much that after five unsuccessful entries you are guaranteed an entry on your sixth attempt.

The Maratona is an Italian favourite with domestic riders making up 50% of the field; of the remaining half, Brits make up only 7% of the entries. I have not got a problem with my fellow countrymen, but it has a great feel to be in an Italian event.

There are three routes available: the Maratona at 138km and 4230m ascent, a Middle route of 106km and 3130m, that misses out the Passo Giau (more on that climb later), and then a shorter Sellaronda route of 55km, which is the start loop of all three routes. 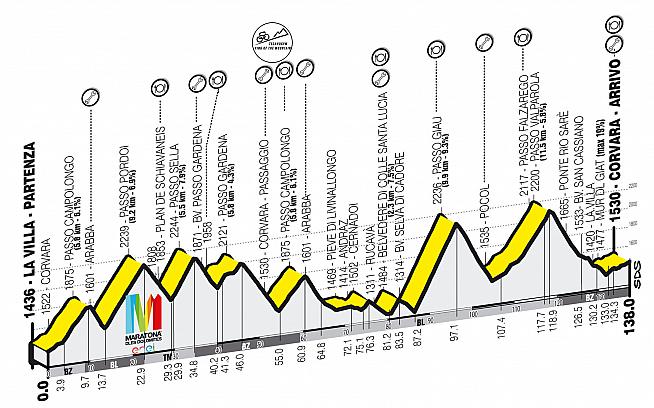 Profile for the long course on the Maratona dles Dolomites. It's a toughie

I have heard stories from veterans of other large sportives that include long transfers at the start or finish, which sounds hard work. The Maratona starts 3km from the town of Covara and finishes in the same town. This makes it easy logistically and even better when you finish.

One thing I did not know before the event was that it was an official race, with amateur gran fondo racers going head to head for the win, which is covered live on national TV. I was fortunate to be in one of the front start pens and could feel the tension in the front rows as these guys, mostly tiny Pantini type climbers, waited for the B of the Bang.

The ride (or race as I had just found out) went off at speed, and as we hurtled through Covara and started the first climb of the Passo Campolongo I was passed by many determined and serious looking riders. It had been a long time since I have ridden 4000m+ ascent, but lucky that I have experience of this and settled into my own pace, repeating to myself what I tell many of many training clients: 'start steady and finish strong'.

The first descent was a dream with the road closed to traffic. Normally when riding in the mountain you can not let the bike roll, with either cars blocking the way or fear of crazy motorcyclists coming up the climb. The descent did not last long though, as next up was the Giro favorite of the Passo Pordoi, cresting at 2239m. This is a lovely climb and one that you can ride at a steady tempo, and everyone seemed to now settle into a rhythm, in preparation for a long day ahead.

We stayed up high for the next two climbs. The 2244m Passo Sella was the highpoint of the day, not just in vertical metres but in the quality and beauty of the climb, with a smooth gradient, good road surface and surrounded by amazing rocky mountains. 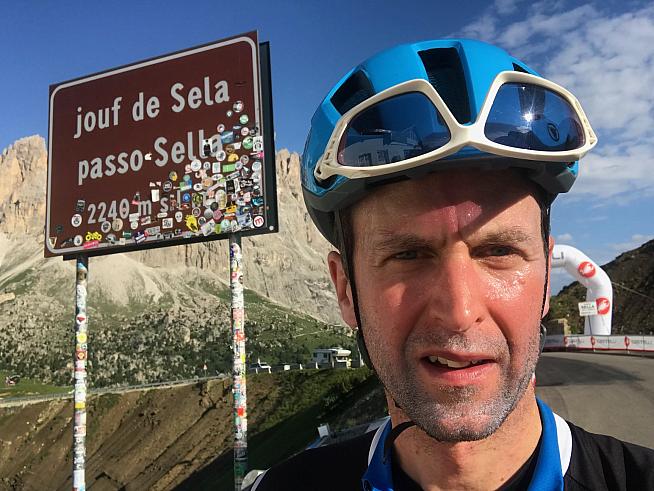 This was followed by another 2100m epic, the Passo Gardena; it was then a long fast descent back to the start town of Covara to complete the short loop. Passing through the town the atmosphere was great, but we were smashed back to reality as we started to climb the Passo Campolongo for the second time.

My steady start was paying off, and despite stopping for more cake and taking more photos than the riders around me I was passing groups on the climbs and feeling good for the two monsters that lay ahead. 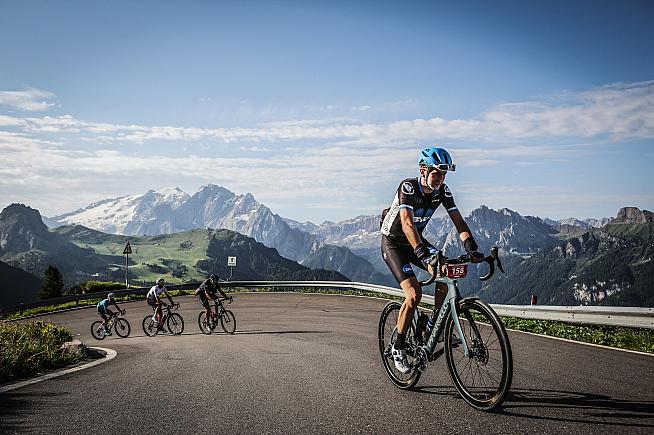 The toughest climb of the day and another scene of many Giro battles was the Passo Giau. Looking at the stats for this climb the evening before had me in fear, with an average gradient of 9.3% over its 9.9km length!

On the valley road before the climb I was picked up by a large group of riders, most of which were pushing for a fast time. This was perfect and I could sit on the back, munch through as much food as I had in my pockets and readied myself for a tough final 50km.

The hard bit of the Giau is that it is relentless, with no flatter sections at all to take a break and recover. For nearly an hour I was either in my first or second gear, trying to keep my heart rate down and keeping control of my breathing. It was a stunning climb and at the top there is also very little flat road, in fact just enough space to put a feed zone, before the road tips and plummets down the other side.

A well-needed can of Coke and a photo later and I was off, with one climb left to go. 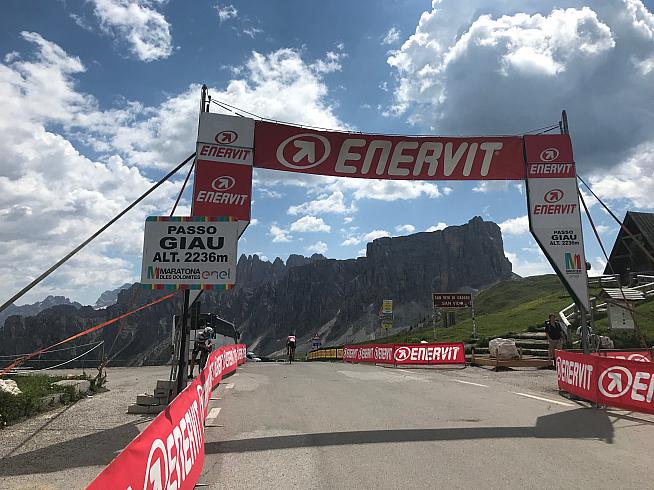 The top of the Passo Giau

If the Passo Giau sounds bit too much for a fun day out then the Medium ride is just the ticket: it cuts the climb, but does all the other six ascents to make an easier but by no means easy day.

After a speedy descent we hit the final climb, the Passo Valparola. This is another whopper, topping out at 2200m - but thankfully with a more pleasant gradient of 5.8% average over its 11.5km length. After the strain of the Giau this climb was perfect, winding up through the woods and then out in the harsh rocky terrain for the final few kms.

The final descent was a fast and swooping road, the fastest of the day, and we were flying back to Corvara. I could taste a cold beer already, but then I remembered the sting in the tail, the Mür dl Giat ("wall of the cat"). This cheeky 19% kick up as you enter the town will test what is left in the legs: mine just passed the test, and then it was a quick roll into town for that well-deserved beer. 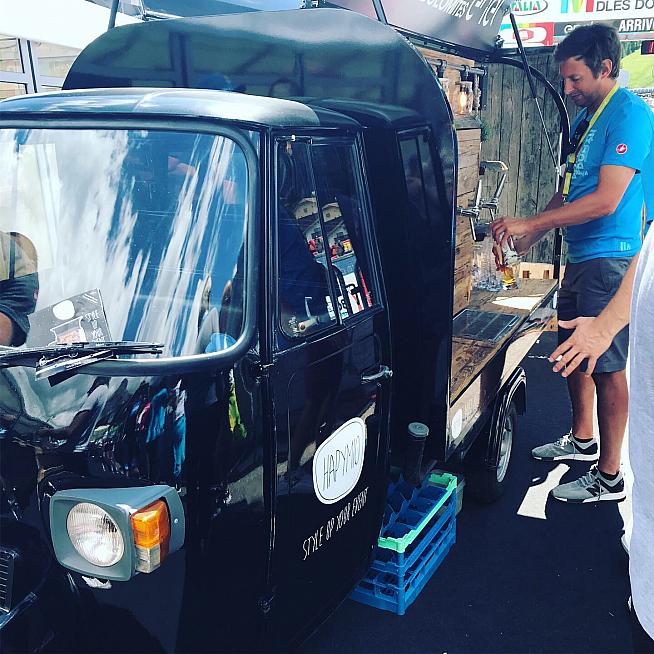 Oli completed the course in a time of 6 hours 2 minutes and 13 seconds, with an average speed (including stops) of 22.9km/h. That was good enough to finish in 70th place in his age group, 368th overall.

The winner in the men's race, for the third year in a row, was Tommasso Elettrico (ITA) in a time of 4'36". Christina Rausch (GER) won the women's race for the second year running, in a time of 5'22".

Next year's 34th edition of Maratona dles Dolomites is on the 5th July 2020.