During these difficult times, we're being encouraged to help the local economy by shopping at independent stores in our neighbourhood. But does that really work for bikes?

Well, it does if you've got rising British brand Orro's HQ right on your doorstep.

Orro, based in the heart of Sussex, offer a range of urban, gravel, speed and endurance bikes - the latter two of which are ideal for sportive riders partial to tarmac.

My century collecting obsession dictated that the Orro Gold STC endurance machine would be my weapon of choice, and with a spec sheet including Shimano's Ultegra Di2 groupset and Fulcrum Wind 400 wheels, I may well be able to tick the speed box as well. 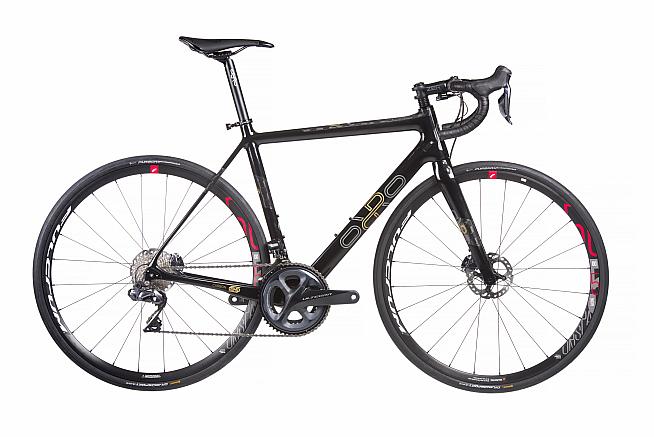 The "STC" part stands for Spread Tow Carbon, which Orro describe as "an exquisite carbon fabric which uses unidirectional spread tow tapes, allowing for a much larger number of fibres in a smaller space."

This technology has enabled them to create a frame and fork which they claim is exceptionally low in weight, while "boasting brilliant stiffness and comfort".

The carbon forms an exquisite chessboard pattern, which is showcased on the top-tube, seat-tube and forks with "windows" in the paintwork allowing the weave to show beneath a glossy clearcoat. Embellished with gold and silver logos on a gleaming black backdrop, it's a stunningly good-looking frame. 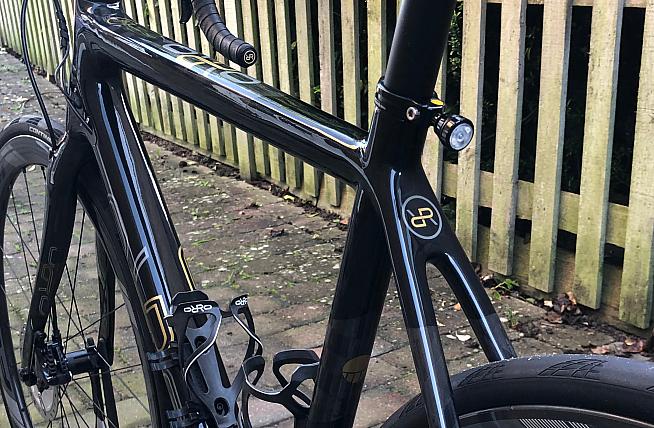 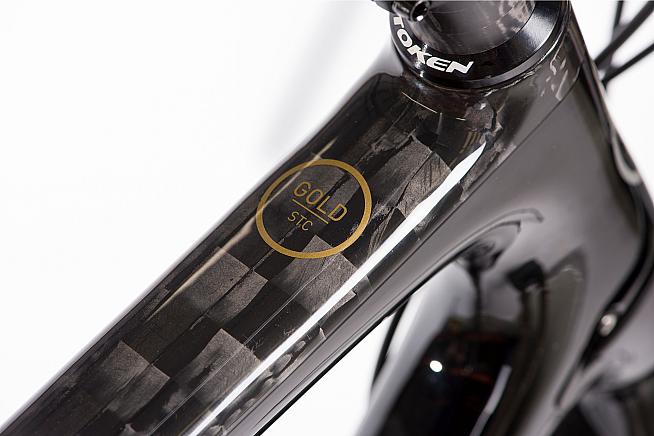 The frame uses Spread Tow Carbon - with the weave visible in parts through the paintwork.

There's no disputing the Orro Gold's kerb appeal, but is it fast? Is it comfortable? And can it climb?

Just a few of the questions I needed to ask the Gold; and three test rides later I would have all my answers.

Test Ride One: The Hills

My first Sunday out coincided with my club mate Eoghan McHugh's Everesting attempt. The day's plan was to join him for a few reps to test out the Orro's climbing and descending capabilities.

I arrived at the foot of Firle Beacon as Eoghan completed descent number thirty-one, almost half-way through his ordeal. The road up to the top is almost a mile long with an 8% average gradient and a couple of stretches peaking around the 15% mark... perfect terrain for my first round of testing.

After a brief greeting we're off: my first climb on the Orro and part thirty-two of Eoghan's all-day assignment. I hardly notice the gradient as we merrily chat away, and before I knew it we were at the top of climb without breaking sweat.

Had the chat taken my mind of the climb? Or is this new bike indeed a climbing beast?

There's only way to find out... let's go back down and do it all over again. 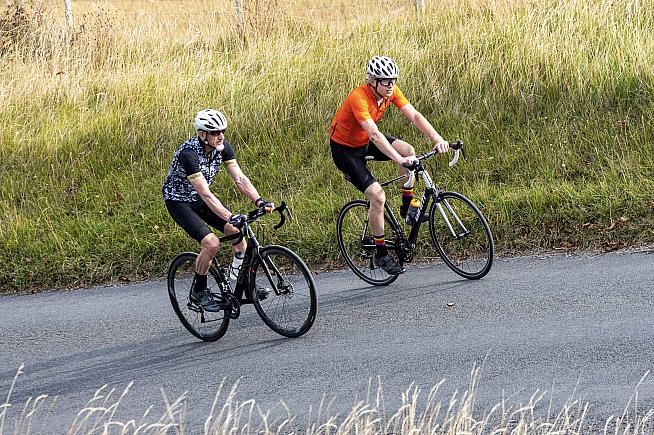 Dave paces Eoghan up another ascent on his Everesting challenge. Photo: Clive Jarman

Coming off the beacon we're immediately hit with a chilly headwind. I'm pleased I kept my gilet zipped up. The bike though, has no such issues. The electronic shifting makes rising through the gears a doddle as holding the lever in clicks through several cogs at once, wasting no time in reaching descending gear utopia.

The headwind immediately turns into a crosswind as the initial bend sweeps left, but the bike handles as if it didn't have a care in the world. I'm a bit nervous, given it's my first descent on the new machine, but the assuredness of this bike heightens my faith as the tarmac hurtles past beneath us.

The first right-hander arrives and I sweep round as if I've been riding this bike for years rather than days... the handling is magnificent.

Towards the foot of the climb, the road surface deteriorates as pot holes and bumps arrive one after the other, but the bike takes it all in its stride with the frame and 28c Continental tyres dampening the shock, providing a comparatively smooth ride. 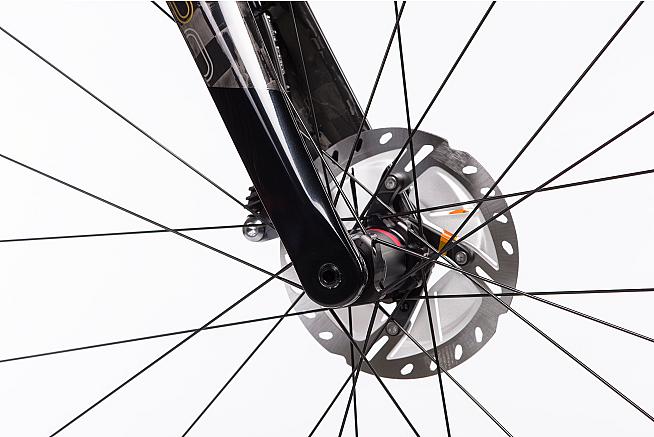 The second ascent was as easy at the first as the lightness and comfort of this machine makes climbing a breeze. I'm enjoying it so much that I join Eoghan for another... and another... and before I knew it I'm into double figures. This bike really does eat climbs for breakfast.

Which reminds me, I haven't had any yet... so I leave Eoghan to complete his mission, bid my farewell and whiz through the short ride home.

> 12 lightweight upgrades to save weight from your bike >

The following Sunday was earmarked for my twelfth hundred-miler of the year, and the bike's biggest test to date. There were no epic climbs on the route, but Mother Nature couldn't resist getting in on the act as she dispatched a ghastly north-westerly across the Sussex and Surrey countryside. Who needs expensive wind tunnel tests when you've got twenty mile-per-hour winds to deal with?

The crosswinds feature highly on today's ride, pounding me from my right as I traverse over to the south-west corner of Surrey and ripping through my body, making my bones shiver, as I meandered back over to Sussex. But the Orro doesn't care... it's a wind machine so it laps it all up. 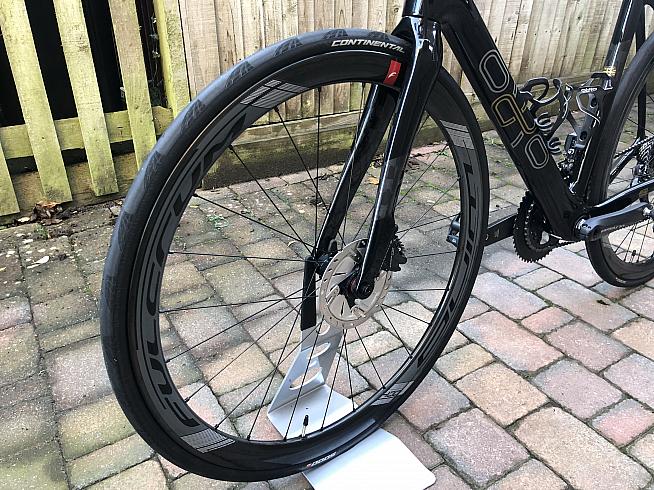 The occasional spell with a tailwind makes you feel like you're sailing as the Orro knocks out prolonged sections of high-speed exhilaration. The frame is more than stiff enough to translate effort efficiently into forward momentum. Even my usual nemesis, the headwinds, are dispatched as if they don't exist.

Despite the unfriendly conditions today, I arrived home comparatively fresh. It helps that the bike is a good fit - at 5'9" I'm riding the size medium - and I'm not suffering from the usual lower back pain or neck ache from several hours in the saddle.

I also bag my fastest century of the year. Consider both the comfort and speed boxes duly ticked.

Here comes the rain... the variety of which can safely be filed under T for torrential. Horrible to play out in, and definitely horrible to ride in, but I need to see how this machine handles in all conditions, so there was to be no wimping out today.

The rain had subsided somewhat by the time I opened my garage door, but the roads were awash with the usual array of autumnal debris and a layer of surface water which once resided in the clouds. I wasn't keen. The Orro though, like an excited puppy, couldn't wait to get going.

Out in the abyss my plan for easing into the ride is thwarted as the Orro demands speed at every opportunity, those wide tyres handling the slippery surfaces without inhibition.

The first descent arrives and my attempts at caution are resisted as the Orro urges me to let it glide. It handles the corners as if they were dry, with braking being both easy and assured. A single finger on each lever is sufficient to take the edge off the speed, providing the confidence I need to go with the bike's flow. 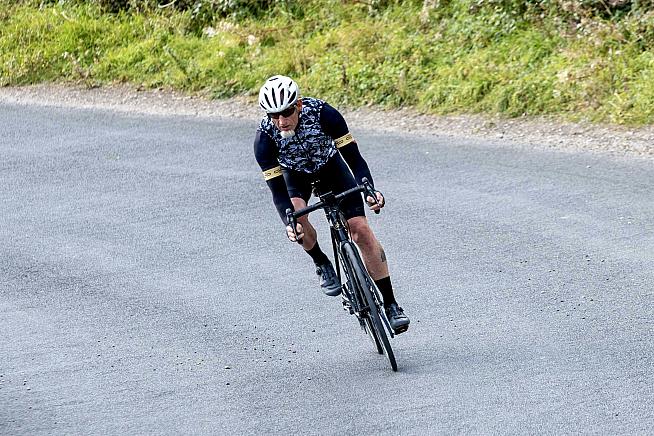 It's a testament to Shimano's hydraulic disc brakes, and indeed the entire Di2 groupset is a flawless package. Electronic shifting is a revelation; clean, precise and immediate gear shifts every time.

The semi compact 52/36 chainset allied with an 11-28T cassette provides just the right range of gearing for long, aggressivley paced sportive and club rides. Only on the toughest sportives - think the Dragon Ride or Fred Whitton in the UK, or the Alpine beasts abroad - might you feel the need for a slightly lower bottom gear to take the sting out of long mountain ascents.

I arrive home a few descents later in the knowledge that the bike has gained my trust after delivering me safely at the foot of every slope. Yes Orro, I will take you out again when the conditions deteriorate.

If you're looking for an all-rounder ideal for sportives that is fast, comfortable and handles with assurance in all conditions then look no further than Orro.

I've thrown everything I can at the Gold STC over the last few weeks, it passed every test and ticked every box. It comfortably takes the title of the best bike I've ever ridden, and I absolutely cannot wait to get back out the road to share some adventures with my new best friend. 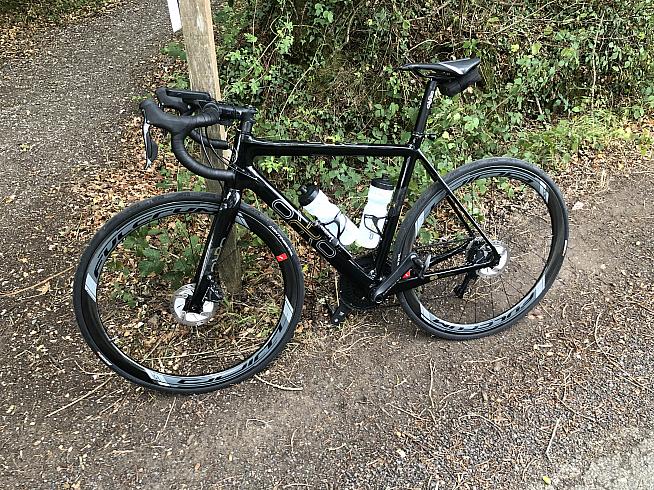 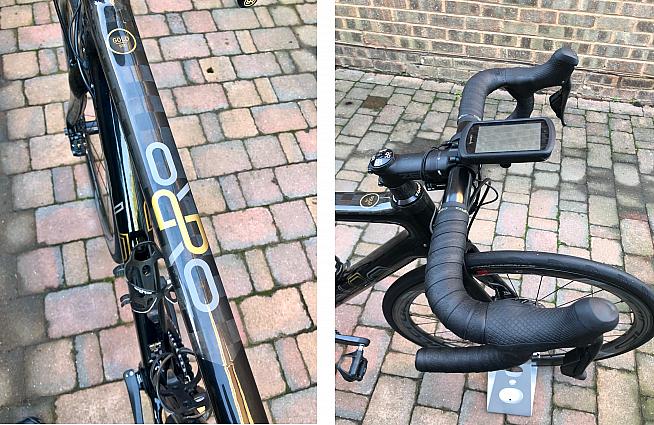 The Gold STC frameset will set you back a bargain £1,499, while complete bikes start from £2,499. Orro also have a range of gravel and urban bikes, plus the super-sexy Venturi aero machine for riders focused on pure speed.

For all-day sportives or independent exploration, though, the Gold STC deserves its place as Orro's flagship model - it's the complete all-rounder.