I'm not sure if/how you, as a cyclist, identify with the tag of MAMIL. Personally, I quite like it - although I think I've probably gone beyond that particular acronym now, and should perhaps be called an OAMIL - I'll leave you to work it out.

MAMIL is an acronym of "Middle Aged Man In Lycra".

A middle-aged man who is a very keen road cyclist, typically one who rides an expensive bike and wears the type of clothing associated with professional cyclists.

"He spends his weekend mornings cycling with other MAMILs."

That's what the dictionary says, but MAMIL will be defined by different people in different ways.

People on the street may look upon us as a group of weirdos that get dressed up in tight-fitting clothes to go out and play with our mates on our bikes.

Amongst our own kind we can make the choice to encompass the whole deal or split off into our own groups: sportives, club rides, time trials, solo rides or even races, but we can all be considered 'guilty' of adopting the same clothing choice and dressing the way we do. So trying to nail the meaning of a MAMIL may not be as straightforward as one might think.

In an effort to put the whole phenomenon into some perspective, the Australian film company Madman released MAMIL: Middle Aged Men In Lycrca, a documentary that set out to explore the strange subculture of middle aged male cyclists.

Although I'd heard of the film around the time of its release last year, I never got round to watching it until it appeared as a viewing option on a holiday flight we were taking. So, rather than read my cycling book, I tuned in, made myself as comfortable as possible and watched it on both the outbound and return journey.

Having seen it, and enjoyed it, on the postage stamp-sized screen I decided to have a more leisurely view so ordered the DVD and put it on the big screen at home.

Although the film makers are Australian they don't just stick to their own patch but visit different cycling groups from other parts of the world, including some MAMILs here in the UK. And it turns out that, although there may be many miles between the places that we do our pedalling, the thought processes of MAMILs the world over are identical. It must be part of our collective DNA.

During the film we get to see how some cycling clubs have started and grown, as well as getting an inside view into being the president of a cycling club, and the amount of time and effort it takes to commit to such a role.

Injuries, spills and accidents are part and parcel of our sport and, try as we might to avoid them, we are fully aware that they can happen. When they do, there is always an element of why me, why now and, maybe, an element of self-pity. I know I've had a couple of spills that kept me off the bike for a few weeks, but nothing compared to the guys we meet during the film - I take my hat off to them. 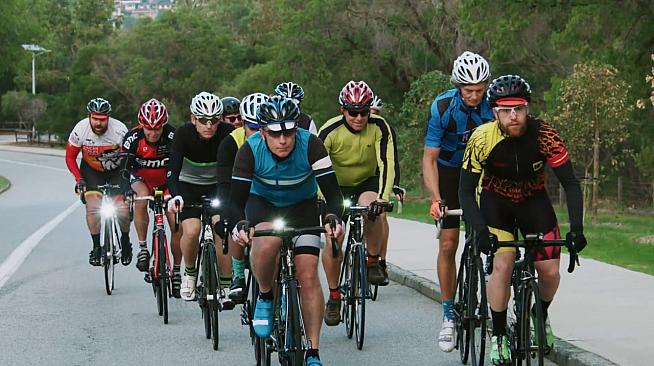 Every cyclist must be aware of N+1, the maths equation used to calculate the number of bikes a MAMIL needs, where N is the number of bikes presently owned. It'll come as no surprise then to hear some guys talking about the number of bikes they own and the, some might say, devious ways they have managed to divert their other half away from the potentially sticky subject of further bike purchases and the actual cost of said purchases.

We've all done it I'm sure, and I suspect nothing new will be learned about that during the film...sorry.

Despite this, the film does chat with some of the wives of the riders involved and it would appear that they, too have similar DNA to riders' wives across the world. Furthermore, it's quite clear that they aren't fooled with some of our excuses and attempts at deception.

Most seem to worry that we are taking too many risks, spending too much time away from home and family duties, and becoming obsessed with our cycling needs(?). Others think we may look a bit odd in our lycra, but they also seem to realise that that is who/what we are and accept it for what it is.

I have to admit that, although my wife is very supportive of me riding my bike and claiming to be a MAMIL, I wondered what support she might give to the on screen wives. Fortunately she smiled along with it, and offered no more than a knowing nod to most of what the wives were saying.

Throughout the film we are introduced to a group of cyclists taking part in a 200km annual charity event to raise money for cancer support. Nicknamed the 'MAMIL train', we get an insight into their trek across part of Australia for the cause and the money they've raised. We also get to accompany one guy on the Vuelta equivalent of the Etape du Tour, and get a glimpse of the trials and tribulations as well as the joy of taking part in such a massive challenge.

Of course, cycling obsession is not a uniquely male preserve. Female club members are not forgotten in the film, and one of the interviewees even suggests, maybe tongue in cheek, that perhaps they should be called 'MAFILS'. The women in the clubs are just as keen as the guys, albeit used to being condescended to; but when the fellas express concerns that they might be beaten by a girl, it gives the ladies a bit of a chuckle.

It's difficult to review the film without giving away too many spoilers, but I have to say that I really enjoyed the film, each time I watched it.

The documentary offers a good account of what MAMILS are all about in an unashamed manner. It manages to convey the camaraderie of the cyclist, the pain, the sorrow, the determination that cyclists have to achieve their goals as an individual or a team.

And, if nothing else, it gives one a warm fuzzy feeling knowing that we cyclists ain't peculiar. We do what we enjoy, it's good for us, and, whatever outsiders think of us, as one contributor says, "I'm a MAMIL, and proud of it."

MAMIL - Middle Aged Men In Lycra is available on DVD priced £12.99 from amazon.