Even I'm too young to have seen it when it was released, let alone the majority of you lot, but some may recall a scene in Ridley Scott's Prometheus, his long-awaited revisiting of the Alien saga, in which David, the titular ship's android, is seen to be modeling his hairstyle and speech to some grainy footage of T E Lawrence snuffing a match with his bare fingers.

When one of his colleagues tries to repeat the exercise, he burns himself.

"Oooh, it damn well hurts!" he exclaims, to which Lawrence replies:

The fellow soldier, Potter retorts: "Well, what's the trick, then?"

"The trick, William Potter, is not minding that it hurts."

That basically sums up riding your bike in the Surrey Hills. Glorious Gravel was hosting me once again, this time not too far from home over roads and some trails I was familiar with.

I'd say I'd done 75% of the route that the course was mapped over but there were sections that I'd not yet explored. Still, the weather was nice, the trails were dry and I knew more or less what me and my riding buddy that day were letting ourselves in for. 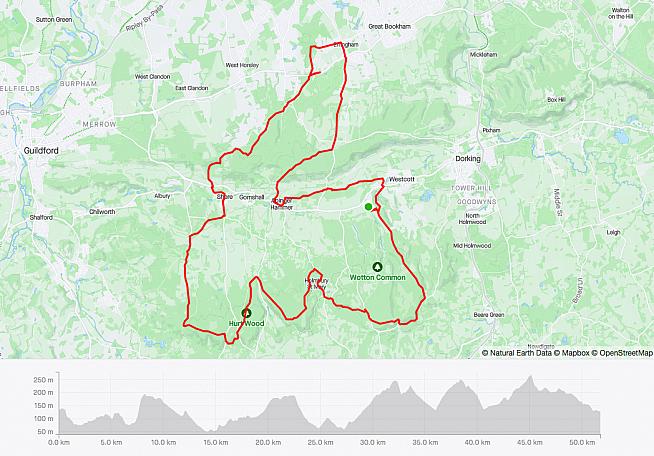 Starting at the end of Sheephouse Lane at the bottom of the north side of Leith Hill, we twisted and turned towards the A25 and a rendezvous with a climb that strikes fear into the heart of most road riders in the area. Classified in Simon Warren's 100 Great Climbs, White Down is a painful trundle of a climb for the likes of me, even at my fittest (and lightest).

What we weren't told until the start was that the road climb had been substituted by an ascent of the gravel road that runs parallel. Imagine being challenged to do 10 push-ups and then being told that you have to do them on your fingertips with a sack of spuds on your back.

The climb starts as a continuous ribbon of grey threading its way at an increasingly desperate percentage. Many brave souls started in earnest, but one by one we began to dismount, opining that walking was easier and faster. The near Sisyphean task of getting bike and rider up to the top was made even more arduous by the sudden appearance of a troop of guys riding down the hill on motocross bikes - if you hadn't dismounted before, it seemed churlish (nay perilous) not to yield to these armour-clad fellow-travelers.

Once over the top and feeling like we'd figuratively extinguished the flame we were offered up, via excellent signage and pre-ride GPX, some of the less gruesome terrain the North Downs had to offer.

Even a partial ascent of Newlands Corner didn't dampen the spirit and the tune playing in my head was 'Things Can Only Get Better' - probably depends on whether you or your parents were raised in the '80s or '90s what song you're trying to think of now, but mine varied from Howard Jones's to D:Ream's version.

A couple of entertaining road descents lifted our spirits even more as we tumbled back southwards, but every time we encountered a downhill, there was an up-payback. Thankfully, these were road-based also and while tiring, not fraught with the constant threat of oncoming motor traffic or walkers. 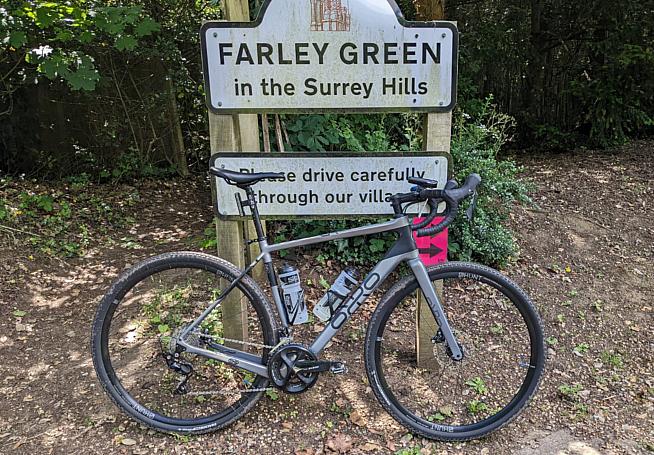 The day's dial hit 'Nasty' when we started up an innocuous-looking sandy track in Farley Green. Ride Lane, as it is ironically named, is a root and rock-filled gulley, littered with pedal strikes and random, weapons-grade swearing. On Strava, the segment is a mile long, averaging just over 3% but with a near 5% section when your legs feel like PlayDoh it is evil personified on a gravel bike. Add to this, the appearance of another burbling troop of motor-tossers, and had I the strength to hurl my bike into a ditch, I would have done so.

After this, and back on firmer road, the climb up to the top of Winterfold seemed a doddle but I think that I endured it mainly because I was trying to figure out in my head what 1-in-7 was in percentages and dehydration was playing tricks with my mind.

We were very close to Peaslake and the feed station on our route, but there were a few more perilous obstacles to overcome, in the shape of a partial descent of Barhatch Lane which was more like free-fall, aborted after a couple of hundred metres with a left turn onto a bridleway, producing a heavy aroma of burning brake pads and soiling trousers and then a short climb as the bridleway spat us out on Pitch Hill - then through a car park, followed by a dog-dodging, rattly freewheel down to Peaslake Church which affected my hands so much I genuinely believed that the bottom half of my brake levers had fallen off. 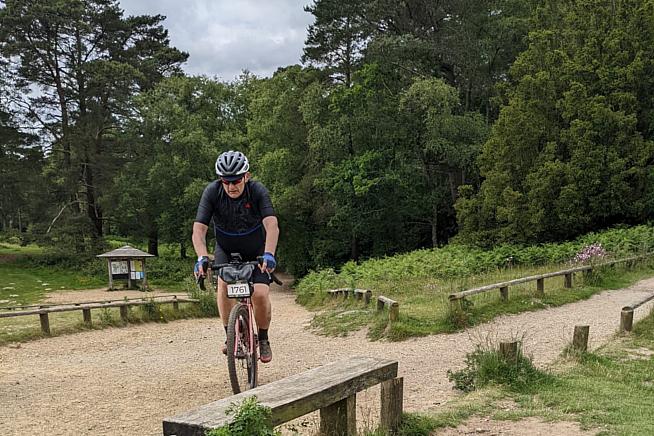 The welcome sight of hot coffee, heaps of filled rolls, and energy comestibles of all descriptions lifted our spirits just enough to forget that the road went seriously up from here. That was OK, though - I've ridden the road from Peaslake to Holmbury St Mary many times and after the initial grunt, its gradient is manageable and at least it's on tarmac.

Much to my disappointment, not only did the route veer off to the left nearing the top of Radnor Road, it did so up the 15% slope into the car park near the top of Hurtwood and then, after some more hand-numbing terrain, back on to the road by the village hall.

One more climb to the top of Leith and all the ascending would be over. I'd often done this stretch successfully on my MTB and I was about to find out how it was on skinnier tyres and no suspension. As it turned out, it was surprisingly doable and it was only the previous 40km in the legs that forced a temporary dismount and rest just before getting back onto the road before the final climb to Leith Hill Tower. 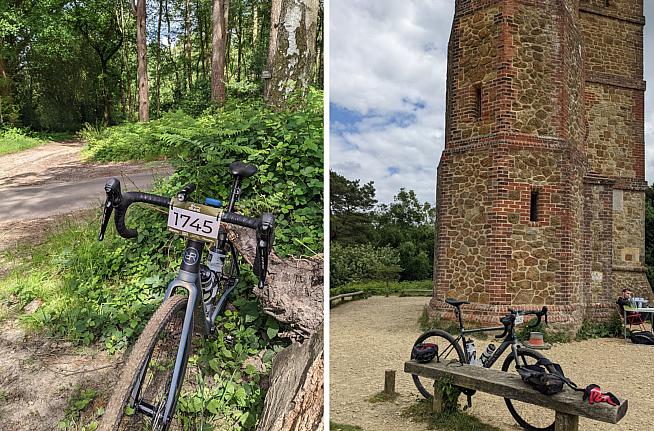 I will confess that this was the part of the ride that broke me - it was only the thought of a cup of tea at the top that actually kept me going. I propped my bike up next to the cafe and then spent five full minutes with my head in my hands - so long so that my ride buddy was considering calling for medical assistance.

Thankfully, I perked up after the administration of some medicinal builder's brew and in the sure and certain knowledge that from the highest point in the Surrey Hills, all of the day's climbing was done and gravity would be my friend from now on. Not that the route down was without its challenges, but we navigated round the roots, gulleys, and shire horses with relative ease and were welcomed back at the event village with an ice-cold, surprisingly good non-alcoholic can of Lucky Saint beer. 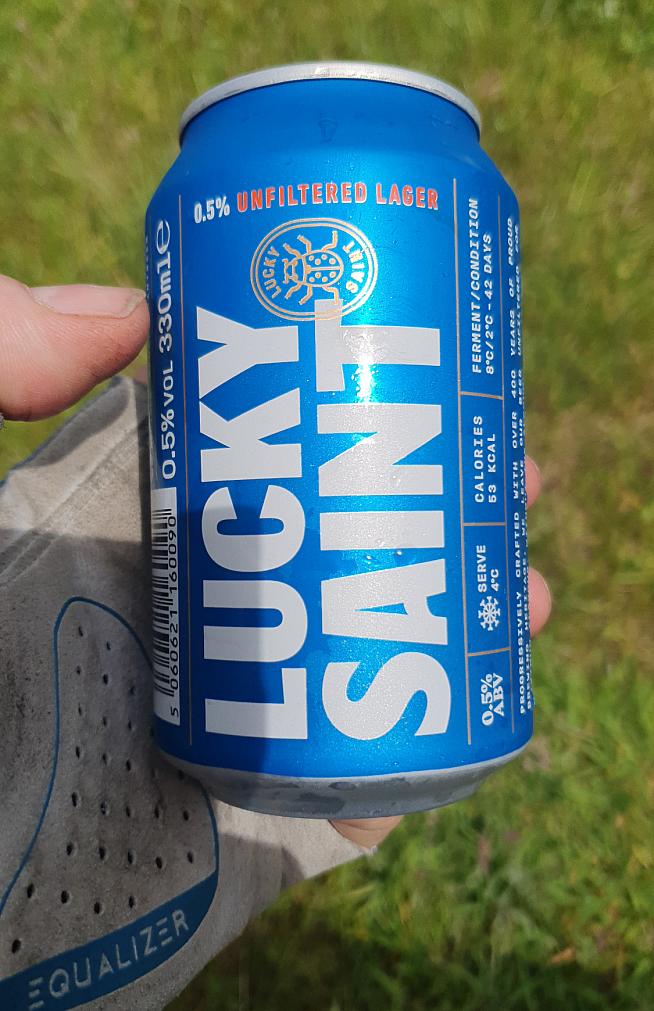 This was the Surrey Gravel X - not sure if the x stood for 'eXhausting' or 'eXhilarating' - but it certainly was an event and course to remember. Kudos to all the riders that completed it, especially those who tackled the 83km Long Route - I'm pretty sure I would have needed medical intervention if I'd attempted that.

I do love these events, even the bits on the road. It's entertaining, seeing the countryside from a different perspective, not just over the tops of the hedgerows that hem you in on the roads. The views over Surrey and Sussex were spectacular, especially when I didn't have my head in my hands, or was staring at my stem willing the climb to be over. 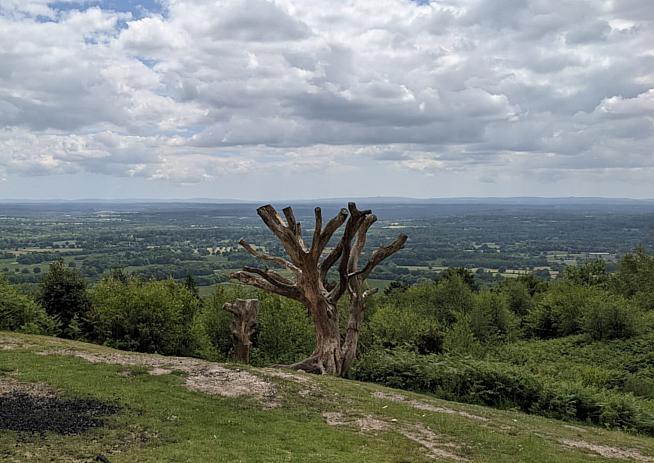 Glorious Gravel's tyre size recommendation was spot on, and I had no issue with the traction or cushioning I got from my Hutchinson 40c Tundras, although the feedback on some of the rockier, rootier sections made my stem-mounted bell ring more than the Trumpton Fire Truck on a call out.

Looking forward to going on more Glorious Gravel events, especially the Suffolk or Essex ones that boast a mahoosive 500m of climbing over 100km - I don't mind that kind of hurt.

Glorious Gravel returns to Surrey for the Surrey Gravel Epic on 30th July 2022.

Check out the full Glorious Gravel series at gloriousgravel.com.