Like many 'sportivistas' out there I've had to suffer the disappointment of a long anticipated event being cancelled due to the bad weather we have all experienced recently, so it was with great relief that the weather was on side for the Giant Rutland CiCLE Tour on 21 April. With three routes to choose from: Short (62 miles), Medium (78 miles) and Long (105 miles), there were opportunities for riders of most levels to test themselves on. I'd chosen the long route.

The event starts from the car park adjacent to Rutland Cycles Giant store on the shores of Rutland Water. With car parking space being limited ITP, the organisers, made the sensible choice of arranging event parking away from the public parking area. The parking was on the opposite shore of the lake and for those seeking big mileages there was the opportunity for blagging a few extra Strava miles between car park and start/finish point.

Registration was straightforward, and friendly, so in no time we were ready for the off and, as is the norm, once the briefing had been delivered the pedals were turning and we were away. 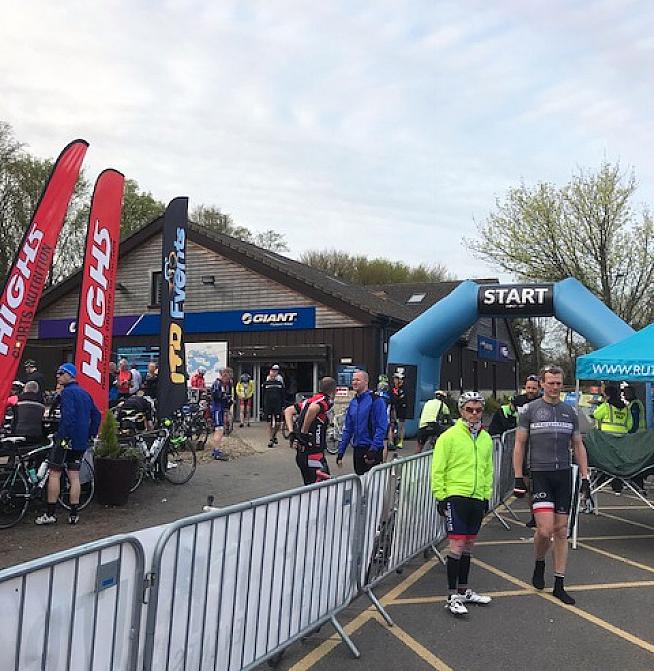 An early start for the 2018 edition of the Rutland CiCLE Tour sportive.

Despite the warm weather warning the day started cold and it was a case of wishing that I'd worn my arm warmers but hoping it would not be too long before the central heating kicked in. The initial group pace was more than suitable, bearing in mind the distance involved, but within a few miles we got to our first incline and it was at this point that the group left me behind, if only slightly. In my defence, living in the middle of the Cambridgeshire Fens means that the main inclines I normally face are the speed bumps encountered through some of the local villages, but I'm not scared of tackling climbs, which is fortunate really because there was plenty of climbing to come.

The day was beginning to warm up nicely, glad I didn't wear my arm warmers, and it didn't seem too long before the first feed station was reached at 28 miles. Some riders in our small group decided they would give this one a miss and carry on to the next one. I took the option for a comfort stop and a slice, or two, of the wonderful fruit granola bar that ITP usually provide, being careful not to overload. There were plenty of other food options and hot drinks as well but after a suitable top up I continued on my way.

The hills, and scenery, kept coming and testing the legs, heart, lungs and mind but the weather really did play its part, warm, sunny but pleasant. Shortly after passing Belvoir Castle the road made a decidedly vertical motion and changing down the gears was accompanied with a graunching sound, a seized rear wheel and a drastic rush to get unclipped before the inevitable fall. Thankfully I managed to unclip in time, and a quick look at the rear wheel showed that the chain had managed to slip in between the large sprocket and the wheel causing the rapid stop. Initial thoughts were just a case of lifting the chain back onto the cassette but it was totally wedged in place, so it was more a case of inverting the bike, getting the wheel out and playing tug of war with the chain. Eventually sorted, it was back on the road with a slight feeling of trepidation as to whether it would all happen again. Fortunately it didn't, phew!

Despite having read the event instructions several times it came as a bit of a surprise that the second feed station was 48 miles away, especially as we passed the location of one of last year's feed stations, and it seemed to take so long to get there. I always make sure I have nutrition in my jersey pocket and plenty of fluids, so it was more of a mental issue than a hunger/thirst thing.

The second feed station felt as much like a social gathering as a sportive feed stop, with loads of riders taking some sustenance and shooting the breeze and having a laugh. Great atmosphere! Food offerings appeared to be diminishing, this station fed all three routes, but I was pleased to see that there was still some of the granola bar available, and some of the salty biscuits that are welcome at this stage of the ride. The infrastructure for the following day's pro race was already in place around us, although I'm sure the pace will be a little more impressive on that day.

After another suitable stop it was time to move on and make for home. One thing's for sure, if you want to practice your hill climbing Rutland is not a bad place to practice. It seemed impossible that the organisers would be able to find any more climbs to test us but they had certainly done their homework and provided even more testing tarmac for us. Every turn seemed to offer yet another climb but continue we must, with the climb at Launde proving a major test for one and all!

After the final route split, at Medbourne, the route took us along the side of Eyebrook Reservoir which could cause a little confusion if you're not quite sure of the geography of the area. During last year's event I thought that this was part of Rutland Water and all we had to do was get 'around the corner' and we'll be at the finish for a burger and drink; but, no, there was still plenty of riding and climbs to battle with, especially coming out of Moorcott and up to North Luffenham. That was, thankfully, the last major test.

Once through North Luffenham it was a right turn and a steady coast back to the Giant shop and through the finish gate, job done. If ITP had your mobile number they texted your finish time immediately, but there was also a member of the support team there who was able to tell your time on the spot.

After settling down it was time for a burger and medals, happy faces and, maybe, tired bodies all round. Last year we were offered pulled pork baps but this year it was burgers; apparently the cancellation of previous events had cost the organisers dearly and this was a way of reducing the costs a little, but it was most welcome. 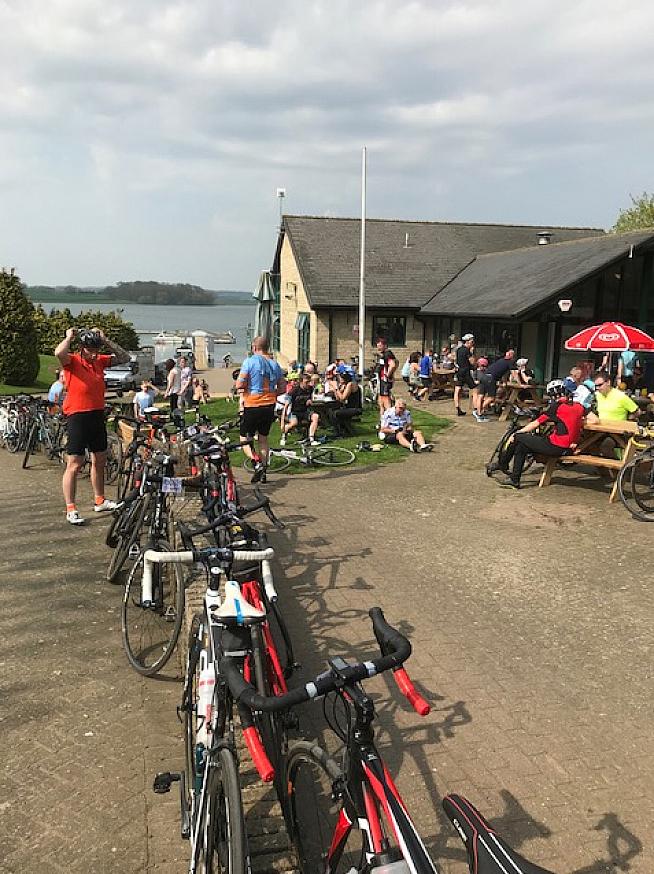 The sun was still shining and most of the riders were making the most of being able to chill out on the grass and exchange road stories with each other. All that was required now was the steady cycle back to the car park, extra miles for the Strava louts, to pack up the bike, change back into normal clothing and head off home.

As ITP say, the Rutland CiCLE Tour offers 'A great day out on the bike'! It certainly was very enjoyable, even with the thought that we'd all paid good money to punish ourselves in this manner.

As always the people that volunteer to look after us throughout the event, start gate, feed stations, road support, mechanics, first aiders, finish team and anyone I have missed all deserve a massive round of applause for being there for us so that we can just pedal ourselves around the route; I thank you.

The Rutland CiCLE Tour is sponsored by Impsport and organised by ITP Events. For more information and news on the 2019 edition, visit the event website at www.itpevents.co.uk.