All the passes, one fell swoop: Fred Whitton 2016 report

The first hurdle in the Fred Whitton Challenge is entering the event. The 112-mile sportive, which packs in nearly 4,000m of climbing, has now become so popular that entries are allocated on the basis of a lottery held a month after event entry opens in December. A total of 2,164 riders made it to the start line out of 3,000 applicants, with the organisers doing a great job of meeting demand - many of those on the reserve list got a ride.

The lucky cyclists to get a place were treated to a sun-blessed, glorious romp around the lakes over every pass, and this year's event included the highest number of first-timers, including myself.

The second challenge is finding accommodation that either gives you a flat ride in and, more importantly, out of the start/finish, or puts you on the right side of the inevitable traffic queue along the A591 between WIndermere and the start town of Grasmere. Taking the the unorthodox approach of a late replacement entry meant I had no focused training plan; in its place was a nervous sense of dread about the physical challenge. Fortunately, a fingers-crossed approach to accommodation logistics paid off, as I found a spacious campsite in Langdale only three miles over a back road out of Grasmere. 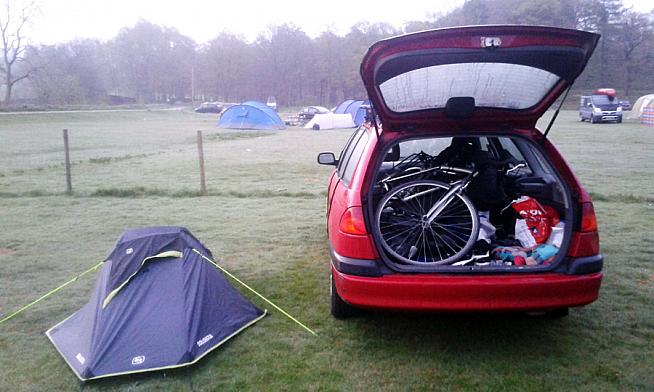 After a hassle-free sign on on the Saturday afternoon, I repaired to my tent to say some prayers, burn offerings and generally ready myself for battle.

Sunday dawned, and ample parking at the start meant that I rolled out with the early starters just after 6am, passing a long line of traffic as car-bound cyclists crawled with frustration along the A591. 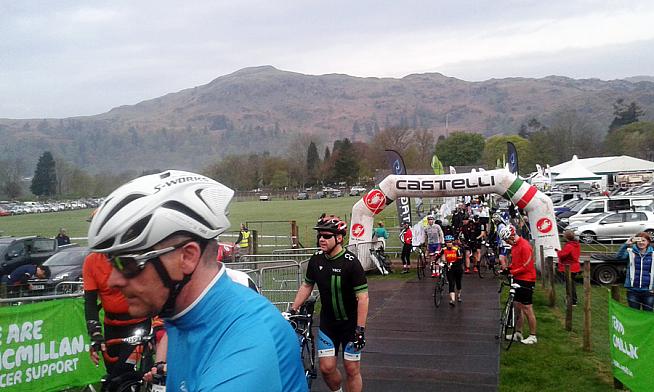 Riders assemble for an early start in Grasmere.

Rolling along the valley road for five miles in pacy groups was fun, until we hit the first of eight major climbs of the day. The dread returned when the groups shattered on the steep little ramp up to Troutbeck, heralding the long drag up to Kirkstone Pass. At 454m, Kirkstone is the Lake District's highest pass open to motorised traffic; my relative backwards motion so early in the day convinced me I wouldn't make the first cut-off, 6 hours and 50 miles up the road.

Cowbell-clanging support at the Kirkstone summit helped temper the dread, and the descent into Patterdale sealed its demise, as the group thing returned, and we steamed through the still misty terrain en masse. 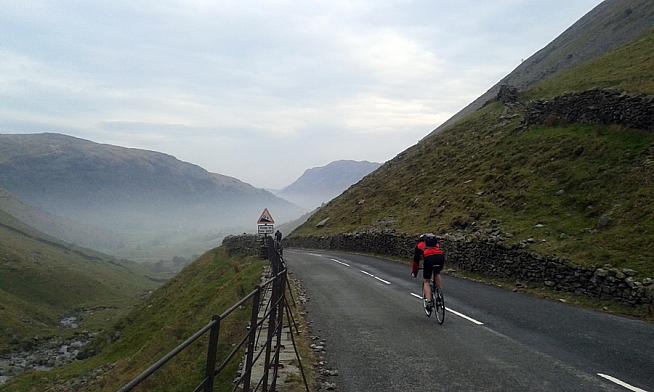 The next climb over Matterdale was pleasantly meek, and the seven-mile-long steady drop into Keswick along the A66 was an unexpected joy as the motoring masses were still snoozing. I was flying into Keswick at 8am on a Sunday morning! An optimal time for a gang of cyclists to make use of a road engineered for 20-ton vehicles.

South out of Keswick and it was back to the steady momentum of ad hoc groups formed around club riders over gently rolling terrain. Borrowdale seduces you with its cool, wooded meander alongside Derwent Water. I resisted its charm, knowing Honister Pass lay ahead and with the solar oven already turned up to mid-morning medium, it promised a bit of roasting. 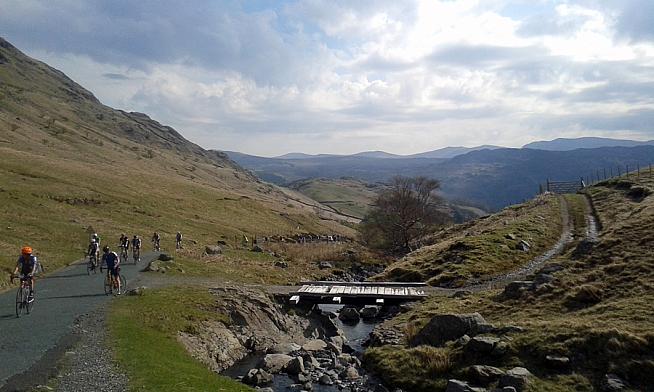 The climb up Honister Pass. 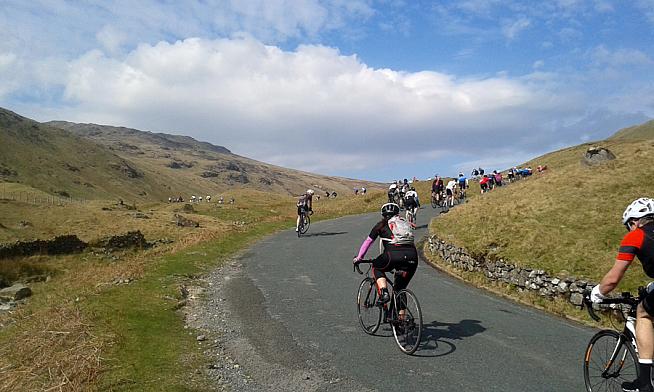 I started climbing Honister expecting my first foot-down moment in many years, and I consoled myself with not being the first of the day. Actually, when the moment came it was a breakthrough. With more than half the distance to go and the toughest climbs ahead, I was labouring under a weight of pride. The moment I made step one I felt free of a stupid deal and moved more easily, glad to be out of that blind contract with myself. The gradient eased, but I took my time. Why pass a lakeland stream with its cooling clarity?

Over Honister and it's the high drama of the glacially carved descent through the V-shaped, 25% scoop of the Buttermere valley. Marshals shouting warnings and paramedics waiting to scrape up the unfortunate added to the excitement. The number of blowouts surprised me. Lakeland roads are not suited to racing slicks. 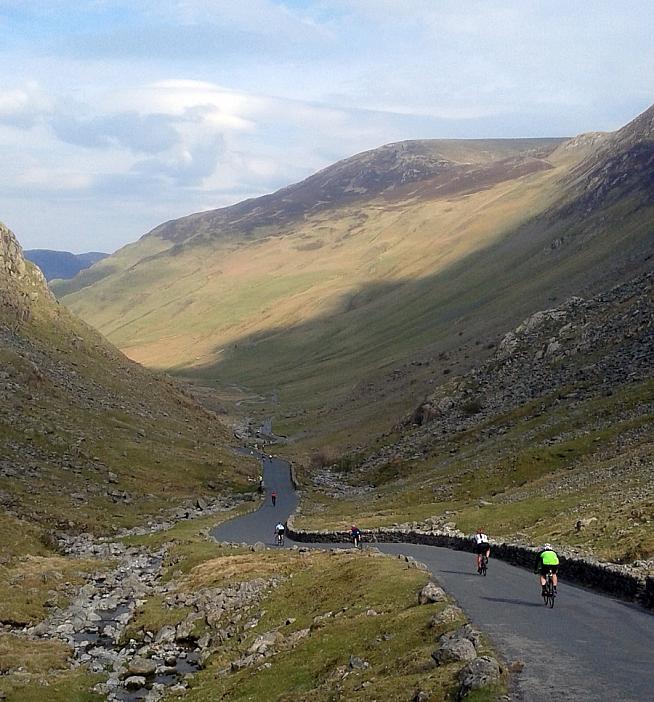 Buttermere YHA feed station was a little hectic but well stocked with sandwiches, cake and generously buttered fruit malt. There were even young banana bearers feeding the queue! I slipped up on self-organising the electrolytes, as by the time I got there, there was only water. Powder sachets is the solution here, easier than carrying from the start the six litres I drank throughout the day. 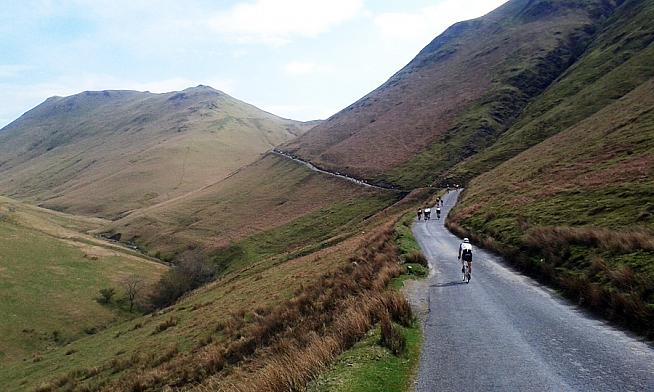 Loaded up on sandwiches and fruit malt is not the ideal state for approaching Newlands Pass, which comes straight after the feed station, but thankfully it's not the monster of Hardknott that lay waiting for us at 98 miles. Another superb descent along the Keskadale valley put me well inside the cut-off time at Braithwaite. Going on at this point commits you to the tortures of the finish, as from here the only way back to Grasmere is over Hardknott.

Just as Whinlatter was starting to grind, the goodwill of those supporting at the roadside expelled aches that were starting to bear down. Some of the roadside cheerleaders were clearly riders' families, and some were local residents; together they gave the event a special feeling, and the riders a much appreciated boost with their cakes and clanging cowbells. (Do lakeland cows even wear bells?) There were an astounding number of marshals at just about every junction along the whole route pointing the way, and by now they too were cheering and clapping us along.

Over the other side of Whinlatter Forest was another fast descent on to the lower slopes of the Western edge of Lakeland. The local club from Honister were out on the road in big numbers and had many non-riders halfway up Cold Fell, defying its name with groovy sounds and jelly bean bearers sending out the warm feelings again, just when needed. 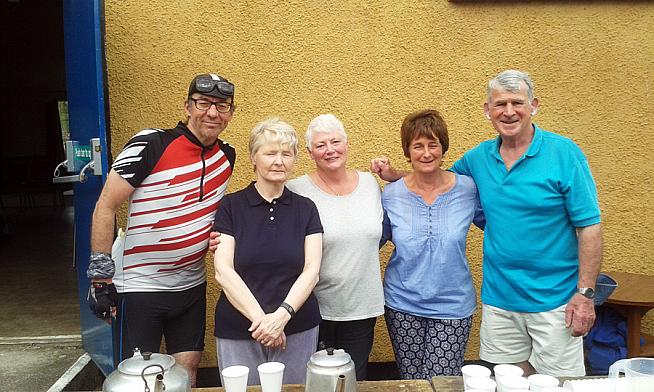 The writer with the real heroes of the race - the tea ladies of Calder Bridge with their apprentice.

Calder Bridge feed station appeared, and turned out to be much more relaxed than Buttermere with plenty of seating, cakes, sandwiches and tea - TEA! - for the weary and walking wounded. Saddleback mechanics were kept a little busier here than at the first feed stop, with their outstanding mechanical refreshment skills put to immediate use.

I passed the second time checkpoint at 84 miles still inside an hour before the cut-off time (3.00pm) and started looking for signs of the monster. Scafell stuck its nose out of the skyline to the left, so I knew I was approaching the badlands of Eskdale (quite genteel actually). I trundled along chatting to someone who had ridden Hardknott before and listened attentively, if futilely, to his detailed description of its ascent. More great advice from a marshal as I rolled over the cattle grid at the foot the climb was sadly wasted on me, as I knew by now this was a walk for me. Chapeau to the many that defied gravity. 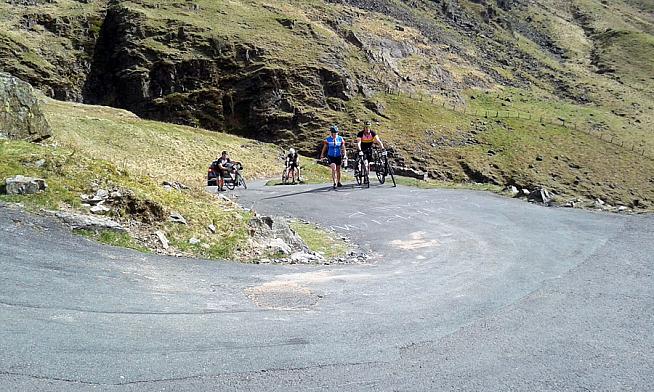 Walkers outnumbered riders on the 30% ramps of Hardknott. 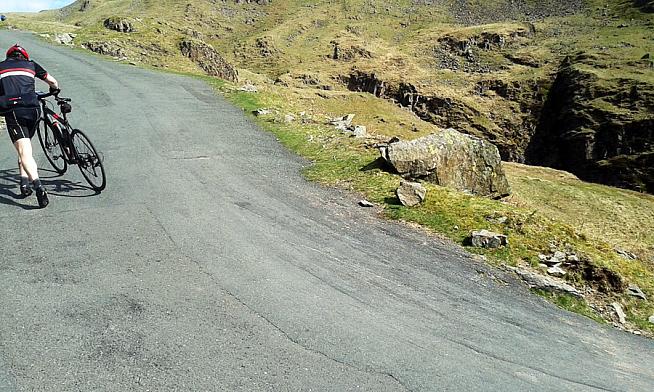 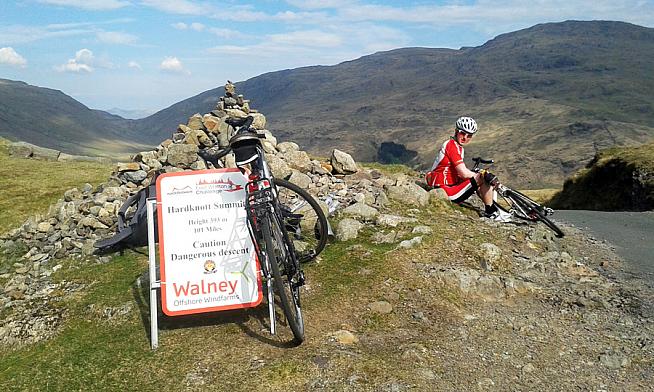 A well earned rest at the summit of Hardknott.

At this point in the afternoon the walkers on Hardknott outnumbered the cyclists. The ridiculous gradient over the monumental terrain under rare Lakeland sun, and perhaps a little salt-depleted delirium, induces a kind of giddy awe. As the few remaining bravehearts went past, eliciting ripples of applause, you could almost hear their internal psychodrama as they shouted at their engines to keep banging the O2 down to the screaming pistons still just about pushing their wheels round. Finally, the pain evaporates and the view from the summit sprinkles its ecstatic rewards throughout the sensory system.

I used to dream of running down hills that steepened to vertical, and although the descent from Hardknott is clearly standard concave geometry, the twisting, mysterious contortions of the disappearing road brought back these images. It finally flattened and straightened out into the high bowl of Wrynose valley. 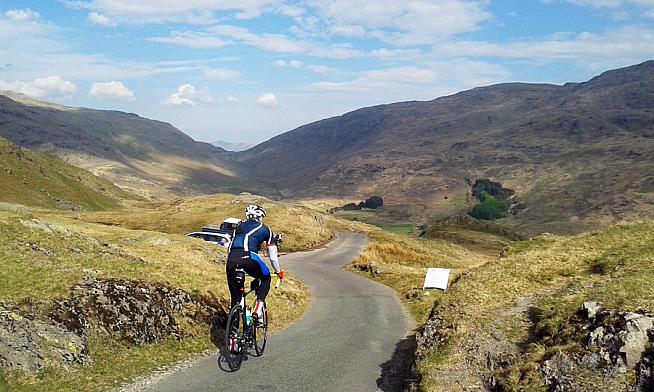 Hardknott summit with Wrynose in the distance.

Fred's last challenge, Wrynose Pass, lay ahead. Finishing was now secondary to just being there in the magnificent terrain. One last cooling stream, the last 150m out of 4,000m of vertical distance, a final writhing, monster descent... After 10 miles of mostly down - and a flat section that yielded a surprising last dash with one final grupetto - I finished a sublime day out on the bike.

Just under 2,100 riders finished the ride. Clearly the weather helped; less benevolent conditions could easily have given this day another dimension of challenge.

It was the best organised event of any kind I've participated in. A good balance of rider self-reliance and logistical support including superb marshalling and quite active support from paramedics and mountain rescue teams does, I think, justify the event's tag of the "premier sportive".

I was a little saddened by the self-importance of the racing culture who ignored the zero-tolerance for littering gel wraps. It seems a shame that their heightened sense of challenge against the clock led them to pass such beauty with such disregard. There are less ugly and more tasty energy delivery systems, after all.

That aside, the spirit of camaraderie among participants was notable. The Fred Whitton lived up to all expectations; for any cyclist looking for a truly challenging day out on the bike, it stands out as perhaps the ultimate sportive test on these shores.

If you fancy having a go yourself, the ballot for the 2017 Fred Whitton opens towards the end of the year at www.fredwhittonchallenge.co.uk.