All too soon it's that time of year again when the nights are drawing in and we may, I'm sure, start getting some inhospitable weather at weekends so one has to decide whether to man up and face it head on or look for alternative pedalling venues.

With the horrific state of the roads around where I live, I prefer not to ride them when it gets too dusky. It's a case of dodging the potholes and collapsing road edges during daylight, so in the evenings with the failing light there's no way I would attempt it; nor has night time riding ever really appealed, despite what enthusiastic friends have told me.

Most weekends are do-able, with the correct clothing and layering, but I have to admit to chickening out if the winds are too strong or the rain is too heavy or persistent, and the combination of both is certainly a no-no!

So where does that lead us? Turbo training, I would suggest; rollers are also available. I know that in some circles it may be considered a bit of a contentious, boring, resort but as most cycling clubs have turbo evenings there must be something in it.

I for one have always had a turbo trainer, my theory being that it's better to do an hour on the turbo if you can't get out on the road. If, as one cycling buddy suggested, you just leave your bike in the garage over winter both you and the bike 'rust' and waste any benefits you may have derived from a year getting out there and doing what we "sportivistes" do best: riding our bikes. Incidentally the guy I mentioned didn't get back on his bike after the aforementioned winter, shame.

The benefits of attending a club-organised session are manifold, of course, but what about the cyclists who can't, for whatever reason, get to a club session? What about the individual who wants to do their own thing? How do you tackle the boredom issue? 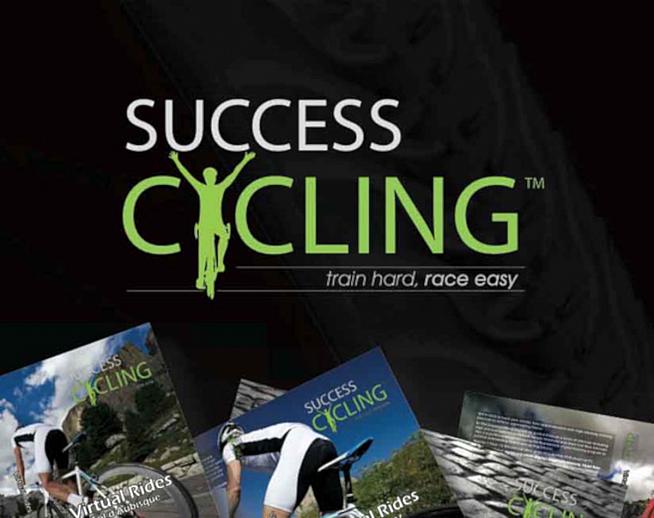 Success Cycling offer a range of training DVDs designed for use with turbo trainer or rollers.

Initially I used to have the radio on and warm up, sprint or arrange my efforts based on the records that were being played. The chat that accompanies the records was my steady period and then when the records were being played I would commit to a sprint or a climb effort or whatever seemed to fit the tune being played. I agree it wasn't very scientific, but at least it got me trying. Eventually though I needed something a little more structured and so I headed to Google to see what was on offer.

Reading magazines and searching Google really brings home what is available by the way of turbo trainers, training packages, performance measuring parameters, display equipment, and the list goes on. I'm sure you know what I mean.

Unfortunately, my home isn't big enough for me to have a dedicated room with rubber matting on the floor, a widescreen TV mounted on the wall and energy drink optics adjacent to the turbo set up to help sustain me through the more strenuous sessions. Also, my budget doesn't allow for the wonderful new smart trainers so I am limited to my normal "thick" turbo, but I'm not complaining because it's kept me going throughout the years and it still makes me sweat so it's doing its job. It does mean, though, that the likes of Zwift and Bkool are not available to me. My sweat box, suffer cave, man cave, call it what you will, is our outside uninsulated garage, it's my full red brick weather shield. It's still cold during the real winter months, but it does force me to "man up" a bit.

So, with the hardware sorted I needed something to push me into better, more beneficial, efforts. Being a bit past the second, or even third flush of youth, not being fully wired into modern technology, and having a garage that's not fully wi-fi'd up I needed something I could understand and use: DVDs!

So now my search was focussed into this area. You don't need me to tell you how many are available, and I've no doubt that folk will have their own favourites that they regularly recommend to fellow cyclists, but the ones I settled on were from Success Cycling.

Success Cycling was founded, and is still owned by, James Jenkins who, as a junior, represented the GB junior national squad alongside the likes of Sir Bradley Wiggins and Steve Cummings. He took part in many junior cycling events across Europe, winning the KOM jersey in the junior Tour of Wales and competing in the junior world road race championships in Verona. His first year as a senior saw him gain his Elite licence, enabling him to add even more competitions to his palmares.

With such a background James was well placed to launch Success Cycling as a training tool to help cyclists of all levels to improve their performances by utilising the "dark" months in their training rooms, on their turbo trainers, when the roads are not so welcoming.

I should state at this point that I don't know James, have never met him, and the only time I have had any contact with him is via his email when I contacted him with a couple of questions, which he answered very quickly.

A quick look at the Success Cycling site will soon give you an indication of the range of DVDs, all of which are also available as downloads. Each DVD is tailored to improving a particular discipline, depending on whether you want to specialise in TTs, increase your strength, endurance or just test your stamina. 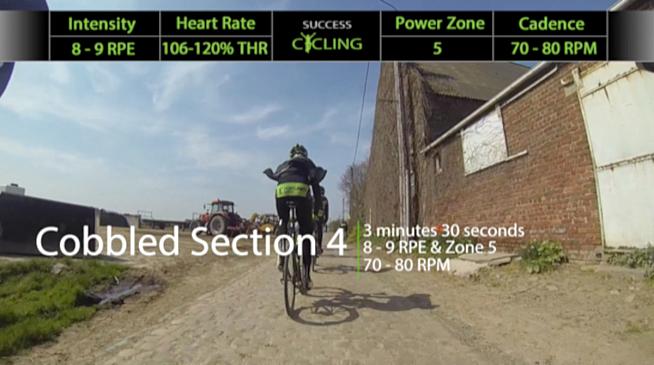 After trying a couple of the DVDs I finally opted for the "Success Cycling 10 week Winter Cycling Training Plan". Why? Because the winter period lasts for a fair few weeks, and if I had a package that I could use that had some structure and guidance it would see me through winter and deliver some useful benefits with the efforts I needed to put in.

Basically, the plan is based on a five-day training scenario and includes turbo, obviously, some core strength type exercises, suggestions on how to continue the training plan out on the road at weekends and, just as important, after a four week cycle a week of recovery. So, with the DVDs and a training zone calculator you're good to go - statically of course.

Having purchased mine last winter I am all ready to go again this year. Although I could say I know what I'm letting myself in for, it's a long time since I last used them so it'll still feel like a new challenge.

The variety of DVDs on offer also ensures boredom or complacency doesn't occur. Starting off with the first session, "Base Building Success", it seemed quite manageable and, following the plan, all was going well until the second base building session, "Base Building Success: The Sequel". This is a one hour thirteen-minute series of intervals that include high and low cadence technique, lactate threshold and short VO2 max intervals, and no matter how I tried I could not keep up with the on-screen guidance. Every time I rode this session I started flagging before the end of the programme, and it became a bit more of a challenge. Strangely enough "Base Building Success 3" seemed a lot easier.

Each of the sessions clearly displays suggested heart rate values, power settings, RPE zones, cadence requirements and timings to help gauge your efforts, but without a smart trainer, it's a subjective call as to whether you are meeting the actual levels. I would argue, however, that if you are working, sweating and generally in the suggested zones you are doing the work and certainly working harder than you would without such a structured plan.

Part of the 10-week plan is a DVD called "Enter the Lab", which is a session totally devoted to working and calculating your Functional Threshold Power (FTP) or, in my case, Functional Threshold Heart Rate (FTHR) - and boy does this bring out the sweat in you. It's a 20 minute warm-up followed by the 20 minute push, time trial effort, you need to obtain the figures and calculate the magic number. This forms the basis of your future workouts and is something you will revisit later in the plan.

The DVDs mostly consist of virtual rides, similar to other formats, where you are presented with a race or course of established races, eg Paris-Roubaix or Tro-Bro Leon. Your training task is to maintain the figures at the top of the screen, all in aid of helping you get fitter, build strength and develop endurance whilst actually going nowhere; although I can honestly say I did manage to keep up with Roger Hammond on one of the sprints.

The beauty of the plan is its flexibility. Last year I worked through all the plan but I did visit my "struggler" DVD several times to try and complete it all the way through. The core strength routines, five in total, were almost a welcome break from pedalling - almost - but certainly contributed to the overall programme.

If your forté is time trials you may wish to concentrate on those sessions more, "Time Trial Success 1 & 2", but, at the end of the day, I got a constant, structured workout that kept me going back for more, kept me working through the winter months and, even if it's my own opinion, definitely helped to make me a stronger rider when we could get back onto the road proper. Whether or not it could be used as a power/fitness indicator, I can say that my average speeds throughout the year were an improvement on the previous year.

Would I recommend the plan? Definitely - and even if you are not looking for a full plan but want some DVDs or downloads to work through, you won't go far wrong visiting the Success Cycling website and seeing what's available.

As for me, I'm off to the garage to thrash my way through part one of this year's winter training programme.