Back when I got into cycling in a big way, I was totally on board with the whole 'horses for courses' thing - road bike for the road, MTB for off-road, right kind of shoe, helmet, jersey, wheels, gears etc.

If you spent your money wisely, you could have an adequate set-up for every occasion.

I began to find, however, that I wasn't suited to all kinds of cycling - either physically, mentally or sartorially - and began to look at compromises where I could be comfortable and confident that my cycling was good for me (and my bank balance).

MTBing was fun, but I wasn't very good at it. Road biking had its ups and downs, but although the downs were getting faster (due to confidence and no small measure of gravitation) the ups were getting harder and harder.

Mediocrity in both disciplines led me to embrace a third option in gravel riding. It offered the relative speed of road and the potential harm, sorry 'adventure', of trails. It also meant I could potentially combine two bikes into one and save on the cost of trinkets and servicing.

Gravel? The Hutchinson Tundra is a tyre designed for the wide gamut of UK off road conditions.

This is the standard fallacy of cycling, that one bike costs less to maintain than two or three - in reality, you're merely inclined to spend more on shiny things for your favourite child while metaphorically keeping the other neglected children in the cellar. (What? Get rid of my old bikes? Are you mad?)

My single, all-purpose bike now had to function as a winter commuter, a Sunday Best, a road machine and a weekend dirt whip - so now the search was on to kit her out with utilitarian componentry.

But the one thing that still vomits on my duvet is tyres.

The right choice of tyres can make the difference between cruising at 25kph (about 15mph in old money) and feeling like having to pedal while going downhill. The Gravel/Monster-cross side of things seems to fall between two stools: minimum tread for dusty and dry, or grippy for sloppy and wet, with very little in between.

XC-type tyres are good for the summer, chunky tarmac chewers great for winter; but I live in the South of England where, if we're lucky to get either season, it's not at the expected time of year and I can't be doing with all that hassle.

I've tried swapping my rubber out in anticipation of forecast conditions and have been thwarted by the weather on numerous occasions, either slipping through slicks of decomposing vegetation or rumbling, square wheeled over rock-hard ruts, often on the same ride.

Add the hassle and mess of physically changing a tubeless tyre and you'll begin to understand the struggle is real.

I want a tyre you can set and forget and not have to keep seasonal pairs, semi-slicked in sealant, hanging in the shed like a shrine to Stan, The God Of Tubeless.

Still, efforts are being made by some manufacturers. I like the look of Specialized's Pathfinders (having already over-wintered on their Tracer model) but they still look like they're made for the good ol' Mid West and not Wealden Clay and horse eggs.

Hutchinson has brought out their Touareg and, more recently, Tundra tyres with a more European attitude - and it's a pair of the latter, the new Tundra, that have been shod to my All-City to negotiate the next three seasons - or three months, whichever is the soonest.

The Hutchinson name is deceptive. They are not, as you might be mistaken into thinking, an American or British company, but French with 160 years of cycling heritage behind them.

Granted, they were founded by an American, Hiram Hutchinson, living in France in 1853, when buying the patent for vulcanising rubber from Charles Goodyear to make rubber boots. Thirty years later, they made their first bicycle tyre and at the turn of the 20th Century developed Monofil casing, said to be stronger than steel, then branched out into the automotive sector.

In 1953 Hutchinson began a long association with success in the Tour de France, partnering Bobet and Anquetil in their victories over the next 15 years. In the late 1980s they pioneered Kevlar technology, and in the 1990s helped establish the UST standard for performance tubeless tyres, finally developing the first tubeless road tyre in 2006.

So, there's a lot of heavy-hitting behind the brand - and its factory is the only one in France still making bicycle tyres.

The Tundra tyres going on the Space Horse were delightfully easy to fit, eschewing the seemingly popular trend of hiding any rotation and pressure recommendations by having this information clearly labelled on both sides of the sidewalls.

The sidewalls, incidentally, are of that slightly browner shade of tan that looks less like something off of one of Mr Miyagi's cars. For the anally retentive, the logo matches up with the valve on the same letter on both sides. 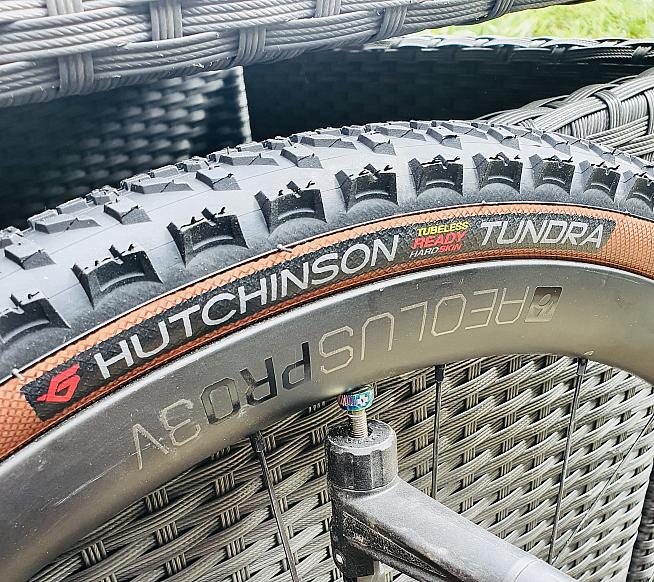 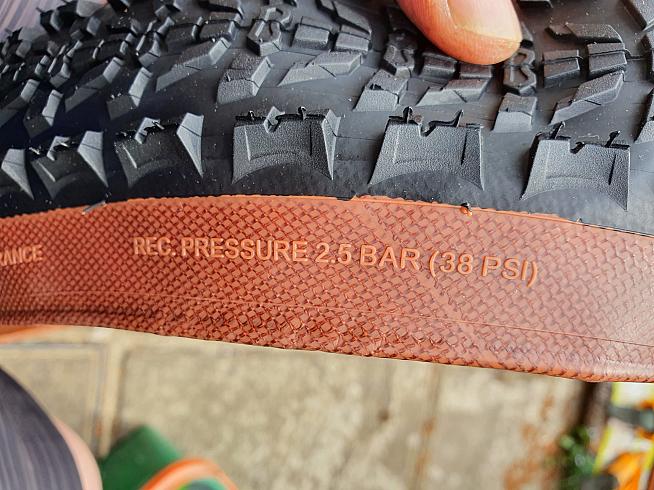 I've recently had some sidewall issues in my tubeless, one flint puncture and on my more recent set, fluid escaping through numerous leaks through the mould flashing. It's all very well having a supple tyre, but it should not be a compromise on a tyre that is used a lot in tubeless scenarios. That would be a distinct Wilderness Fail (amirite?...)

Thankfully, the Hardskin protection on the Tundra looks more Terry McCann than Terry-Thomas and the tyre feels more robust.

Hutchinson also recommend running these tyres at a lower PSI than some I've ridden of late, which suggests an internal robustness not entirely dependent on air pressure.

As for the tread, there are a set of prominent nubs crowning the sidewalls which should abate any fears of things going sideways when the going is less than good, yet their spacing suggests they'd be particularly good at leaving behind any unwanted filth, a bit like Terry's Mk II Capri (sorry about that reference if you were born this century...)

For the majority of the time, the tyre's going to stay shaking hands with the ground, there's a nice high, compact tread to help lower rolling resistance, but as you crank it over towards the crenelations on the edge, you get help from some intermediate but well-spaced hillocks of grippy rubber.

How much they're deployed depends on the pressures you're running, from the recommended 38 to the max 51 psi - the latter being nowhere near what I've been running on my own 'trail' tyres recently. 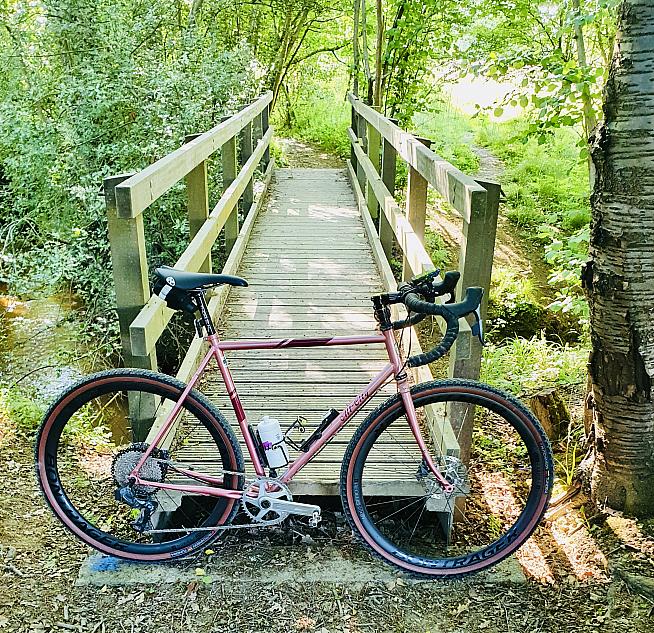 Our sample Tundra tyres slipped onto my Bontrager rims with nothing more than thumbs and harsh language. They inflated and sealed first time without liquid sealant assistance, though I doubt very much they'll stay up for long. Luckily, there was some excellent looking Hutchinson Protect'air sealant in the box in a handy dispenser, but the tyres were still as hard as Arthur Daley's heart over an hour later.

Juiced up and set at the recommended pressure, I took the Horse out for a multi-surface spin. I'm used to PSI closer to my age than my waist size and I found the rear wallowed about a bit.

On the road, the Tundras are a tad noisier than the WTBs they replaced, but as soon as I hit the rougher stuff, their all-round design smoothed the ride nicely.

Fewer pounds per square inch gave the expected grippy but assured ride on what was basically single-track, with a few sharp, rooty climbs thrown in, as well as some metalled byways that were half-filled with hardcore, gravel and house bricks.

I sped down a particularly sketchy track that made my stem bell ring like Hector Salamanca in need of an urgent toilet visit, but the Tundras were sure-footed enough to cope with any nasty surprises and stuck well to the recently moistened mud, showing the value of those shoulder nubs. 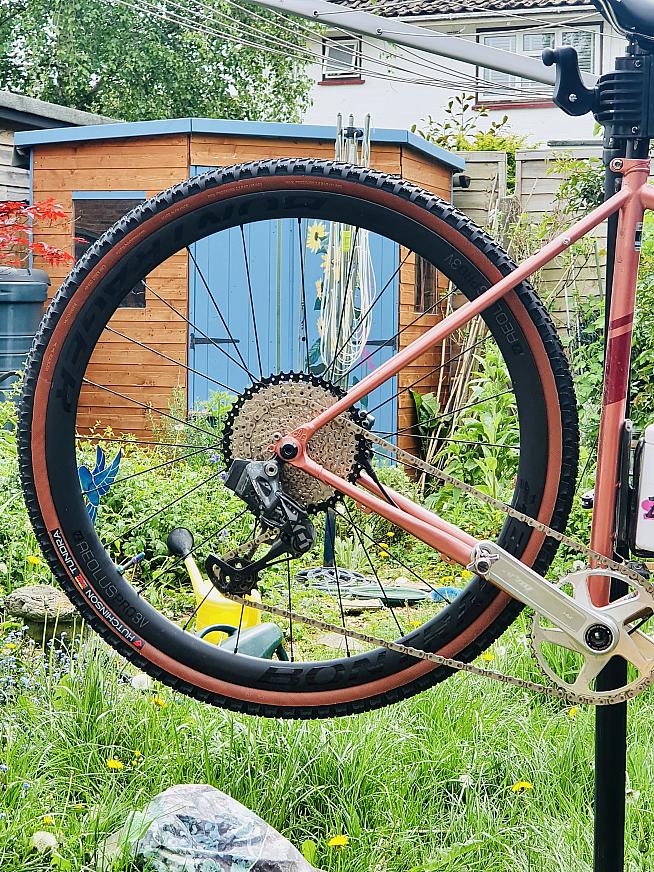 So - no complaints yet. The tubeless is outperforming its predecessor (which was not hard, to be fair) but I'm also loving the extra comfort despite the slightly smaller tyre profile, going from 42c to 40c.

This should mean that come the rainy season - basically any time from now until October - when the mudguards go back on, the Tundras reward me with a tad less toe overlap.

I'm looking forward to testing these out on a longer ride over the next few weeks, but on early impressions Hutchinson have come up with a gravel tyre that fits the brief for the wide range of "typical" UK conditions.

The Hutchinson Tundra is available now in 700x40mm and 700x45mm widths. Each size comes in black or tan sidewall options, with claimed weights of 490g and 580g per tyre.

For more info on the Tundra and Hutchinson's range of gravel tyres, visit cycling.hutchinson.com.