I can't think of anything worse than having my bike stolen - OK, full disclosure, I can think of a million things worse. I'm not going into that because this isn't that kind of a piece, and I'd get people on The Socials randomly messaging me saying I'm more evil than Robbie Rotten in Lazy Town or than the spiny bit at the bottom of a banana.

I can think of things worse than having my bike stolen, but it's pretty awful. My bikes are part of me. I take pride in the way they're made and adapted, they fit me, they take me on my journeys, make my memories - the love, time, and care I put into my machines are very personal to me, as are the experiences I have with them and I don't think it's too dramatic to say that if your take that from me it's a kind of assault on me and my wellbeing.

That said, I'm reasonably relaxed about 'physical' security. I don't really carry a lock with me - I'm fortunate enough to have secure bike parking at work - but when I'm out riding, my bikes rarely leave my sight. I find that's best for my peace of mind. However, I do understand that if I continue to use my bikes as a form of transport, to cut out those unnecessary short journeys by car, it's going to be more practical and efficient to park up for a while. 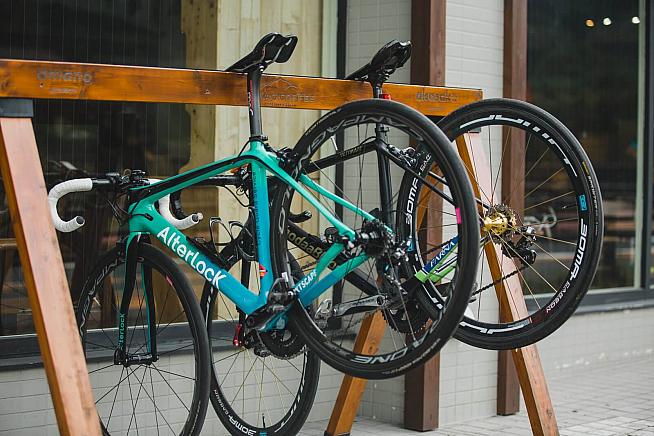 Notwithstanding the existential dread of losing a part of my soul should the worst happen, it's about time I put some trust in the basic good nature of humankind but at the same time, acknowledge that empathy vacuums exist and many will see two wheels and a funny couloured frame as nothing more than an opportunity for a joy ride or an opportunity to make some easyish money on the bits and bobs.

Locks, however robust and aggressively named have been proven to be, at best, minor irritation to the best-equipped bicycle thief. I'm pragmatic enough to understand there is an escalating arms race between lock makers and their nemeses, meaning no device is truly unpickable or breakable. It's all about making your pride and joy the least attractive prospect in the bike rack. I also understand that this approach potentially condemns a fellow cyclist to the possibility of having their property, mind, and soul violated instead of mine, but to save my beautiful bike it's a hit my soul is willing to endure. So, if using war analogies, the nuclear option is usually a sold secure Gold level lock, so heavy that it bends light around it.

If you want to be a bit more sci-fi than that, these days you can invest in ways of getting back your pride and joy by fitting a high-tech tracker, GPS or with an internal SIM or such-like so that the naughty person can be located with an accuracy within 3 metres, presumably for a targetted drone strike. While this sounds a bit 'stable-door', it would at least offer the option to recover a piece of your broken psyche - but I'd rather not lose it in the first place.

So, labouriously, we get to the point. Going on the theory that prevention is better than finding Allen bolts and iron filings in a lock-up garage, what if there was a way to enhance the undesirability of your Precious without having to resort to making it visually repulsive, like most bikes you can buy on Amazon?

Yes, use a reasonable lock, yes add a tracker - the dilemma being that if you alert someone to its existence, it can be found and smashed; if not, it's no deterrent. Bicycle thieves don't like being noticed doing bicycle thief things. One way to get them noticed is to park up in a place where there may be a larger concentration of humans with a better sense of right and wrong, but even the best of us can suffer from serious outbreaks of 'not my problem', so if you introduce a soundtrack to their iniquity it might appeal to some and they might film it to TikTok later.

A bike alarm, you say? What a spiffing idea. 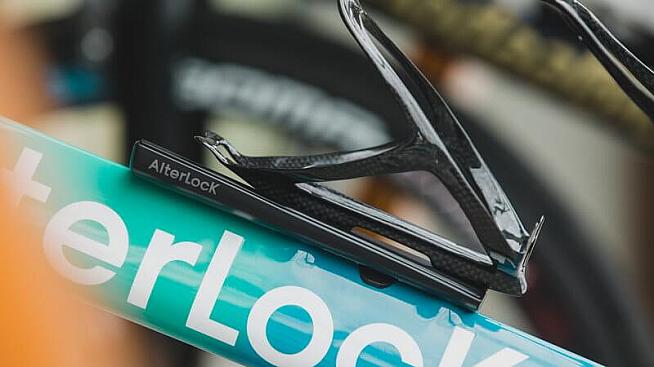 AlterLock is a bike alarm with built-in GPS tracker.

I happen to have one of those nailed on to my best ride at the moment. The AlterLock by Nextscape offers the benefits of an anti-theft alarm and GPS Tracking device to your beloved. Controlled by an app on your smartphone, it can blare out 95dB of LOOK AT ME! if someone messes with your steed while you're at the coffee-stop counter, or taking a comfort break.

AlterLock is ultra-lightweight at 50g, and (for those that care) aerodynamic, fastening securely using special security bolts to your bottle cage mounts, with enough capacity on most bikes to mount a cage on top.

Battery-powered via a water and dust-protected USB port, it can go up to 45 days between charges. The ear-bleedingly loud alarm is triggered by vibration and is activated using the app, as are various other functions, including sensitivity and a raft of other fine-tuning.

Tracking is via subscription, so as well as the up-front cost of the tracker you pay a monthly service charge of £3.49. That seems a reasonable price to pay for peace of mind - but how well does it work? 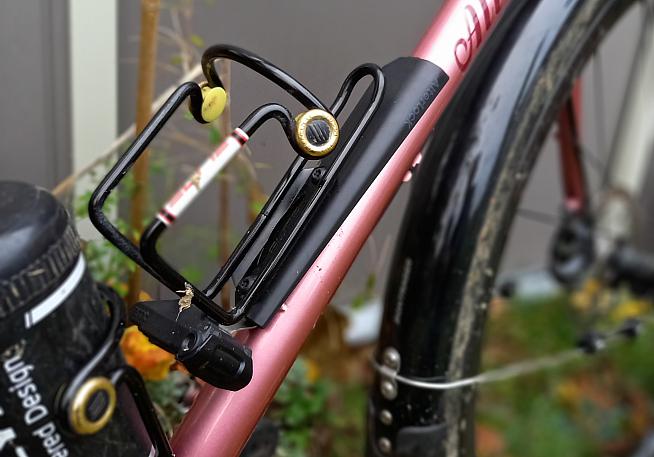 The AlterLock tracker fits under your bottle cage. 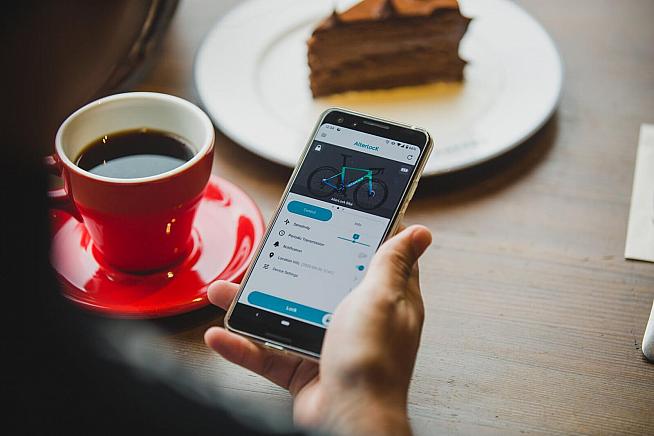 The app alerts you if your bike is moved.

I tried it out on a ride to the pub to see old work mates. They obligingly wobbled the D-locked bike several times as they went past on the way from the beer garden to the loos and it got some severe looks and weapons-grade tutting from others outside with us, so much so that we deemed it a good idea to not do it so frequently.

I also tried it out on a gravel ride the following day, setting the AlterLock to ping my location when I stopped for a mid-ride coffee, and the accuracy was reassuringly accurate.

You get everything in the kit you need to attach it to the bike, and you must use the bolts provided which are Torx-type - if you have a further bottle mount bolt, you need to remove that and cover the hole with the provided extra bung as the close-fitting AlterLock will be damaged otherwise.

What about that tracking? GPS is all well and good, but sometimes GPS isn't available or doesn't work very well. The AlterLock uses a unique combination of Wi-Fi, cloud web services, and Sigfox (the low power wide-area comms standard) to plot its location and report it back to your phone or a local assassin hired to retrieve your bike with extreme prejudice. 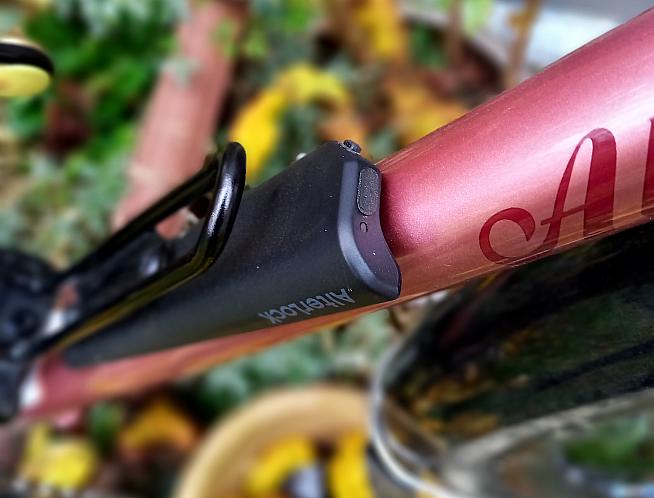 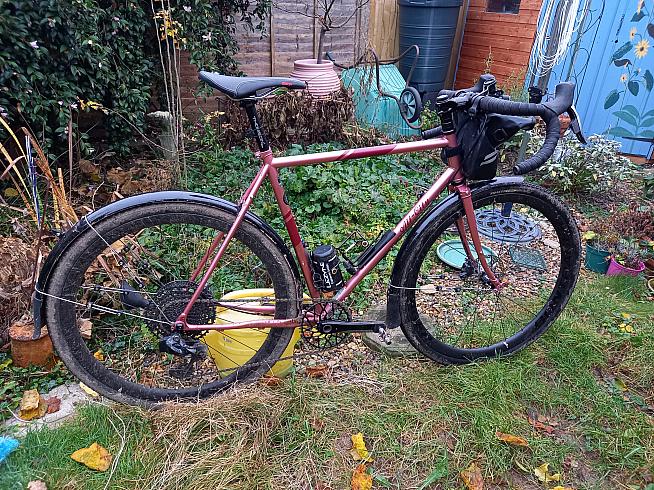 More secure than your common or garden bike lock.

If all else fails and neither the alarm nor the digital bloodhound is enough, the system is tied into a subscription to CycleGuard insurance so that all that's lost is not truly lost and you can at least have some financial assistance to help build your experiences and memories. Basic bike insurance is usually included with your household policy, but is seldom tailored to your needs - companies like CycleGuard have been providing that for decades.

If you're serious about protecting your bikes, then consider getting something more than goodwill to get you through. Nothing can replace those ethereal feelings of adventure and excitement, or make up for that loss and we all know money can't buy you happiness, but it makes your misery a darn sight easier to deal with.