My first car was a Mark 3 Cortina with a tiny 1.3 litre engine, knackered shocks and a vinyl roof that was more green than the intended black.

It had leatherette seats, the handling characteristics of a pedalo on a boating lake, and a windscreen washer powered by a rubber bulb on the floor in the driver's footwell. It also had actual wing mirrors.

On each of the front wings.

The car was so enormous and boat-like that I felt I needed binoculars to see anything in those mirrors, especially on the passenger side. Add to that, they were rarely adjusted correctly and often twisted around by passers-by. They were also a direct route into the bodywork for rain so these shoulder pads were part filler, part steel, and mostly rust. I had a mirror on the driver's door which I could use to see behind me when the rear window was frozen with a quarter-inch of ice, both inside and out. The rear demist only existed to warm my mates' hands when they had to push start it.

Possibly because of this, I have very little reliance on rear-view mirrors, favouring instead the direct and non-reversed view provided by my eyes. I confess to having fitted a mirror on one of my bikes, my first Ribble, which reassured me on many of my first rides that the gargantuan Stobbart lorry bearing down on me would at least swerve towards the centre of the road and spare my life this one time.

It proved to be a distraction, and I found I was looking back more than I was looking forward; quite a few parked cars have 'leapt out' in front of me while I've been checking nothing behind me.

Still, some people (and good luck to them) like knowing what is behind them in varying measures in detail, from simple devices like the aforementioned mirrors to Garmin's Varia Radar system that blips approaching vehicles on your head unit like Xenomorphs closing in on Space Marines through the ventilation system.

It has taken a while, but there is now an option cyclists can wear to give them a peripheral look at what's creeping up behind and use the info to make, or not make, changes to their road position.

Developed by Alex Macdonald and former Olympic and World Champs track cyclist, Callum Skinner, we have the Hindsight Edge glasses: lightweight riding specs with extended lenses that incorporate polished, reflective edges to help give you an impression of approaching doom, be that an 18-wheeler or an opponent in a cycle race, trying to get the jump on you.

The design cleverly allows you to concentrate forwards and use a tactical glance to check for danger, without rotating your head. 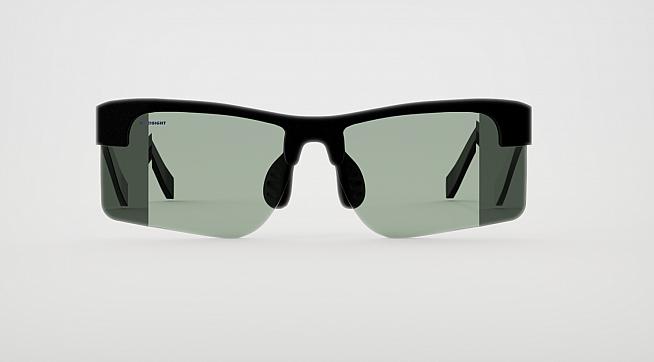 Hindsight Edge glasses offer a view of what's behind you while cycling.

I was asked to give them a go, and while not really enamored with the concept, I decided that they deserved an outing to see if they suited my style of riding considering that most things overtake me.

The packaging is on trend with Hindsight's intention to use renewables, a well constructed and visually engaging cardboard box, securely housing my specs replete with an idiot-proof guide to help you make the most of their unusual design. 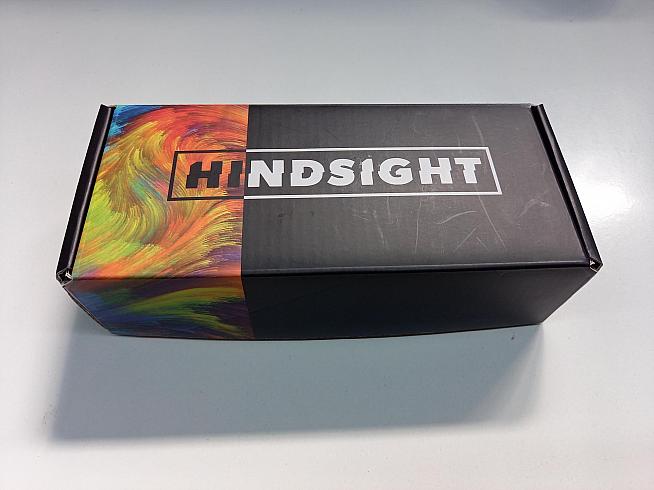 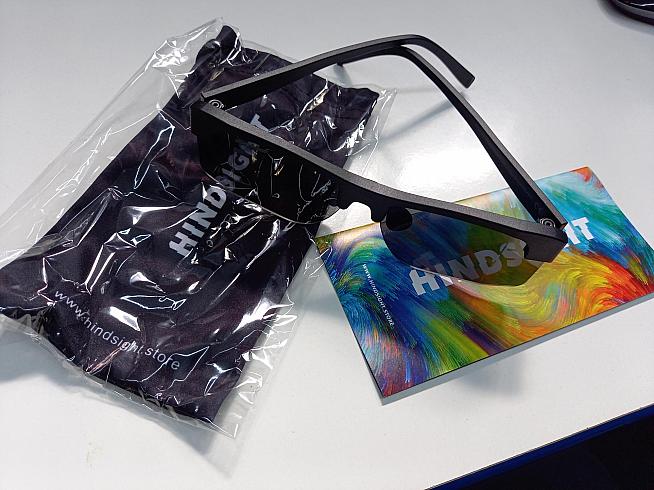 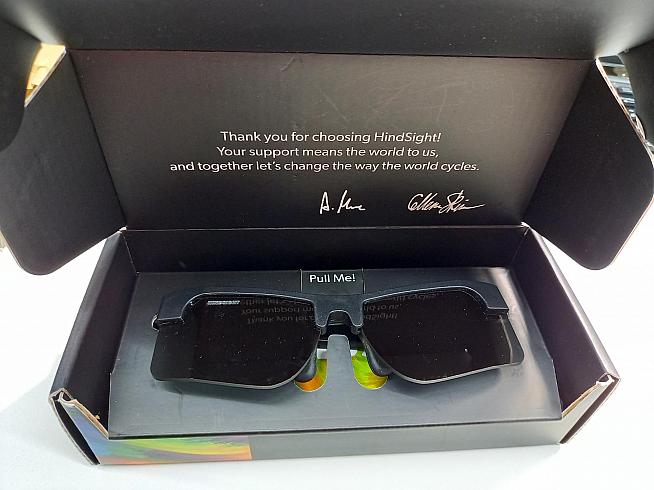 First thoughts were - wow, they are WIDE. This shouldn't have been a surprise to me, as the lenses need to clear the head to afford a mirrored view behind.

The half frames give a closer fit to the lower half of the face but as well as being wide, they're quite flat: something an aero-conscious rider may find a bit disconcerting, especially if they are used to wrap-around styles that cut through the air. There's also an issue with light leakage around the lenses which wrap-around frames do not have. 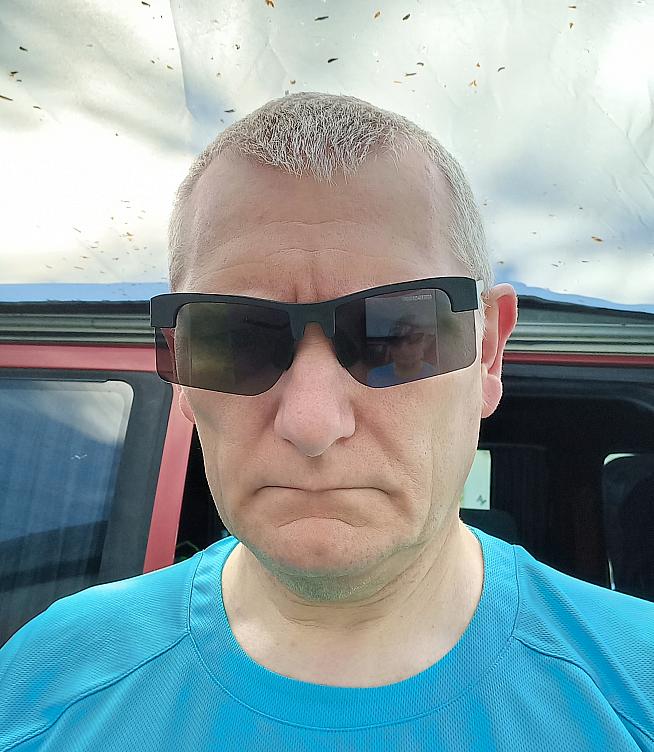 I was a little disappointed at the lack of a hard case, but the micro-fibre case included, as is the fashion these days, would doubtless double up as a lens cleaner - it may be something that they are considering for the future. You can choose three materials for your Hindsight Edge glasses, from sports-grade plastic in the entry-level specs to flexible woven hemp or with plastic coating (a so-called hemp-core version).

The lenses are quite brilliant, optically, and have great transparency - with tinting light enough to use in overcast conditions. The glasses are fairly light at 200g, although that's considerably heavier than the sub 50g weight of a typical pair of non-mirrored glasses.

They are also comfortable, but the light leakage from the side was a distraction when trying to master the UPOS feature - the Hindsight mirrored sections.

Success in getting the hang of it is a bit like seeing the dolphins in a Magic Eye picture you've been staring at for hours, and after that, there's no real effort involved in checking over your shoulder. I did find, though, that there wasn't much point in learning the skill on my left side as a rarely have any issues on the 'inside lane'.

Out on the bike, I encountered a bit of an elephant in the room, or more accurately, in the saddle. I have large ears that protrude out at silly angles (for some reason) when I wear a helmet so all I got to start with was a close-up view of the hairs sprouting out of my tragus (which are numerous and bushy).

I also discovered that I'm a cyclist more in the mould of Chris Froome than I thought. I'm a bit of a stem-starer, so I had a great view of the clouds and sky until I forced myself to look up and forward. This first ride was on my MTB, so it was surprising that I drooped my head so much. On another ride, this time on a drop-handled commute, my head position was better but I mostly got a reminder of how I hunched my shoulders terribly.

When I relaxed, I could see behind me brilliantly. However, since I was on a commute and most drivists I encountered seemed to believe that double-yellow lines are The Cycle Lane, I became more and more reluctant to see behind me. 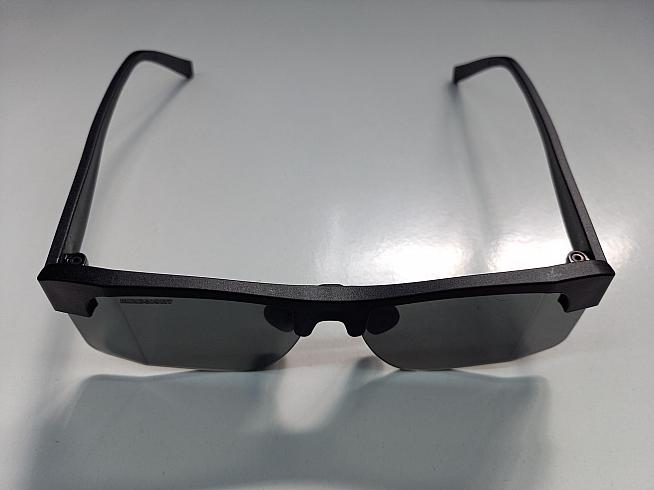 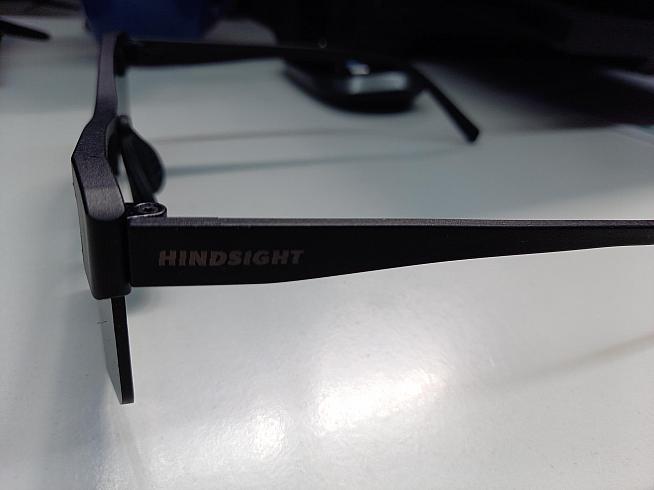 I think Hindsight have a great product here - and there's no question about the quality of the execution - but I cannot see how it benefits me. I'm sure there are myriad reasons why these glasses are revolutionary, and I agree what they do, they do well.

Unfortunately, with my ears and shoulders and personal eyewear choices (and I concede that most sports glasses with prescription lenses are simply not practical from the point of view of cost), I found that my varifocals and a good old 'Life-saver' glance was all I needed to stop my colliding with my ParcelForce-liveried destiny.

I hope these glasses find the market the deserve, and given the success of Garmin's Varia I suspect there are plenty of cyclists out there who will embrace the oft-touted benefits of Hindsight. Personally, if I'm going to be mown down on my commute through no fault of my own, I'd rather it was a surprise.