It's hard to get excited about a bike lock. Bike security is like contraception - you don't really want to have to think or talk about it coz it's going to spoil the fun. Get it wrong just once though and you could pay a heavy price.

To be honest, on most rides I'm a little laissez-faire about bike security. Cluttering up my stripped down best road bike with a lock and frame holder is a complete non-starter. It would be like wearing a bikini with one of those 'Leatherman' tools in a holder on the waist.

Instead, when at a cafe stop with clubmates I opt for the 'herd immunity' approach, believing that no-one would dare to pinch my unlocked bike when it's nestled amongst so many others. This works even better if you park your bike near (or even behind) one of the more expensive bikes in the group - a kind of 'Survival of the Sh!ttest' approach to bike security.

When riding alone, if I have to pop into a shop or cafe I'll try to leave my bike in sight, loosen the quick releases on the wheels and click up a few gears whilst it's stopped so that any opportunist thief would struggle to get away quickly.

There are other times though - commuting, shopping, bike-packing - when your bike has to be left unattended for a considerable length of time. And these are the times when it really would be foolhardy not to carry a decent bike lock.

Although there are a huge range of locks available, those that have been tested and certified by the not-for-profit 'Sold Secure' scheme give the buyer some idea of just how good a lock is. Products are rated either Bronze, Silver, Gold or Diamond, in ascending order of toughness, with many insurers refusing to pay out if a bike is stolen after being secured with a non-certified lock.

It doesn't say how long a fully tooled-up Pink Panther wannabe would take to break a Diamond rated lock - perhaps they'd take one long hard look at it, shake their head in disbelief and skulk off back into the shadows.

The Foldylock Compact, from California-based company Seatylock, is a neat looking lock that I've been using over the last month. 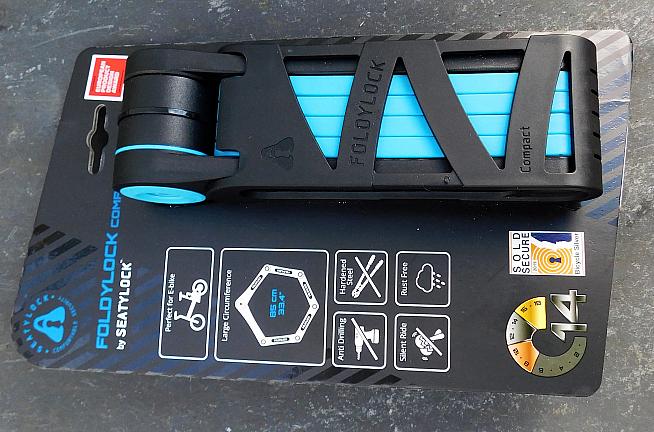 Weighing exactly 1kg, it's claimed to be the lightest Silver-rated 'link lock' you can buy. With an RRP of £64.99 it's aimed at riders who are prepared to pay a premium for a little less bulk, so is ideal for bike-packing where saving weight and space is critical.

D-locks that have the same rating can be bought for a much cheaper price, but are not as pleasing on the eye when fixed to a bike, or as easy to carry in a bag. Their shape and inflexibility limits the places you can easily secure your bike to without the addition of a cable. When fixed to a bike, D-locks and their cables take up a lot of space and tend to rattle, whereas the Foldylock Compact is designed to take up minimal space and can be carried rattle-free.

To protect the user's frame, the Foldylock's six hardened steel links are coated with a tough plastic that comes in a range of colours: blue, orange, black, grey, orange and rainbow. 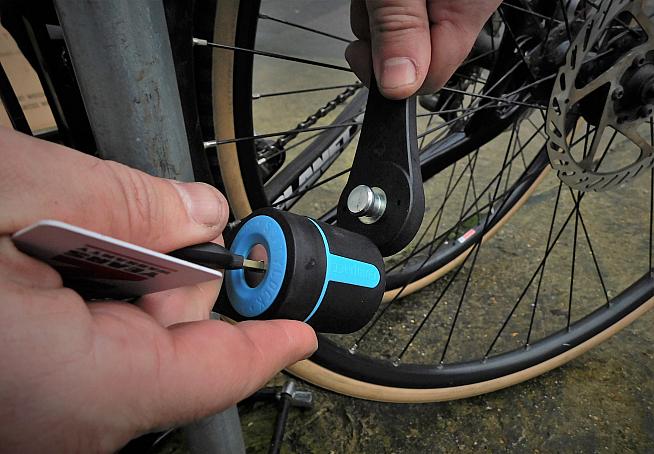 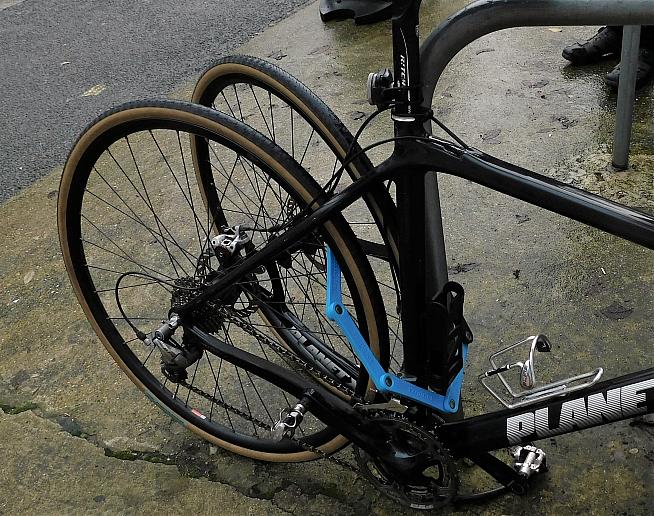 It's possible to lock both wheels to some bike racks.

With a circumference of 85cm, it's long enough to get through a rear wheel and the frame and be secured to a lamppost. At a push, if the bike rack is thin enough, you can get the front wheel locked up as well, but only if you remove it from the forks first.

The rivets and lock barrel cylinder have been designed to resist drilling and rusting and are reassuringly sturdy. The three keys that come with the lock use the same 'sidewinder' cutting that is found on many car keys, which makes them harder for a thief to replicate and the locks harder to pick.

Replacement keys can be ordered direct from Seatylock, who also offer the user a two-year warranty via their website, alongside countless glowing customer reviews.

Although it has a circumference of 85cm (33.5") the straight links prevent you from being able to wear the lock round your waist, as you could with a similar sized chain or cable lock. But, at just 19cm long and 6cm wide when folded, the lock does fit neatly into a backpack, courier bag or bike-packing bag. 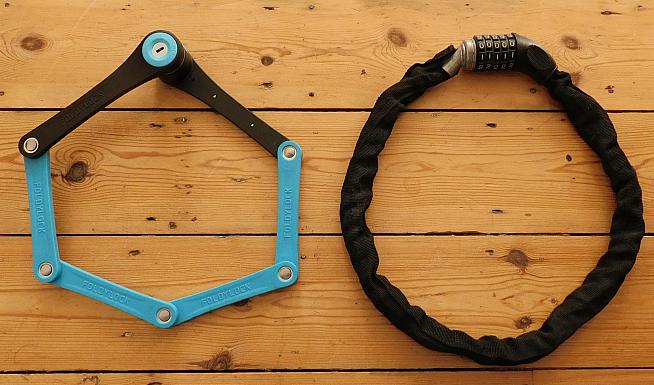 The 85cm circumference is comparable to a chain lock... 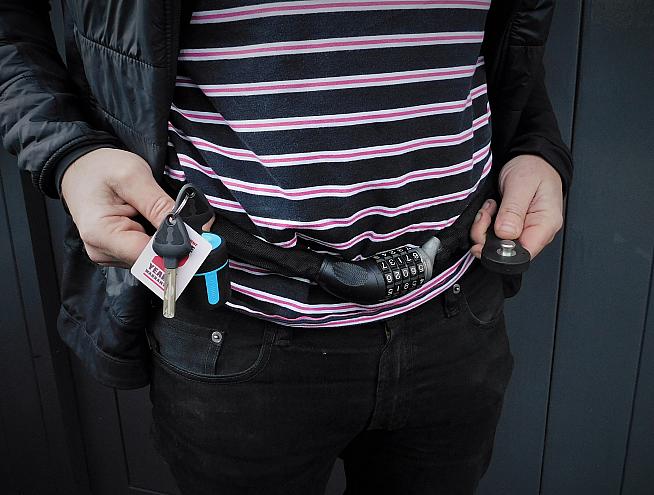 ...but you can't wear it around your waist.

It comes with a sturdy, smooth plastic holder that can be strapped to various parts of the bike with the two supplied velcro straps. For a more secure fit, the holder can be fixed to the bottle cage mounts, which will please practically-minded commuters or gravel-grinders who are into the Swiss-Army-bike aesthetic and desperate to find something new to fix to those extra bosses they've got under the down tube.

'Serious' roadies will be disappointed to find that its 1kg weight makes it just too heavy to be stashed comfortably in a jersey rear pocket.

On my do-it-all 'Frankenbike' I use for commuting, CX, touring, shopping and bimbling around, I didn't really want to attach the holder to the downtube or seattube bottle mounts as in the summer I'd need cages in both mounts for my bidons. Instead, I had fun finding a place to strap the holder where it wouldn't look too obtrusive. 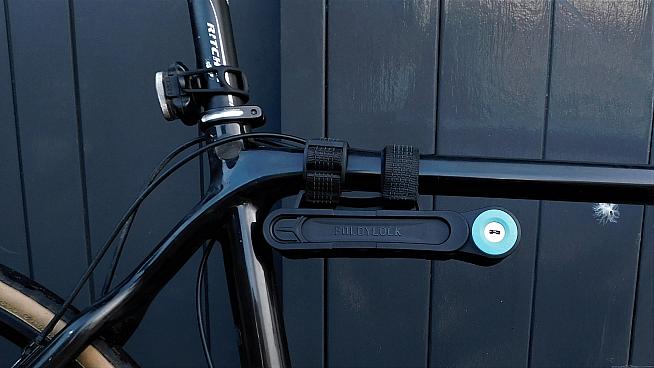 The Foldylock can be carried on your bike's top tube...

Next up, I tried strapping the holder to a fork leg, but this was a non-starter. The fork legs were too thin for the straps to attach to securely and the lock looked faintly ridiculous down there - giving me the aura of an ineffectual spy who has taped a tiny pistol to his ankle.

After that, I strapped it to the underside of the rear of the top-tube, where it meets the seat tube. It stayed there for a while, but again I got annoyed when the inside of my legs occasionally rubbed against the lock.

So after a week or so, I decided to just carry it in my bag. Turns out I simply prefer my bike as de-cluttered as possible. 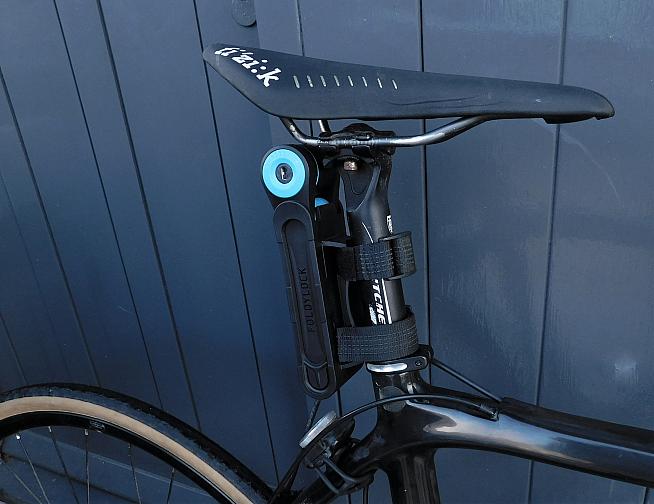 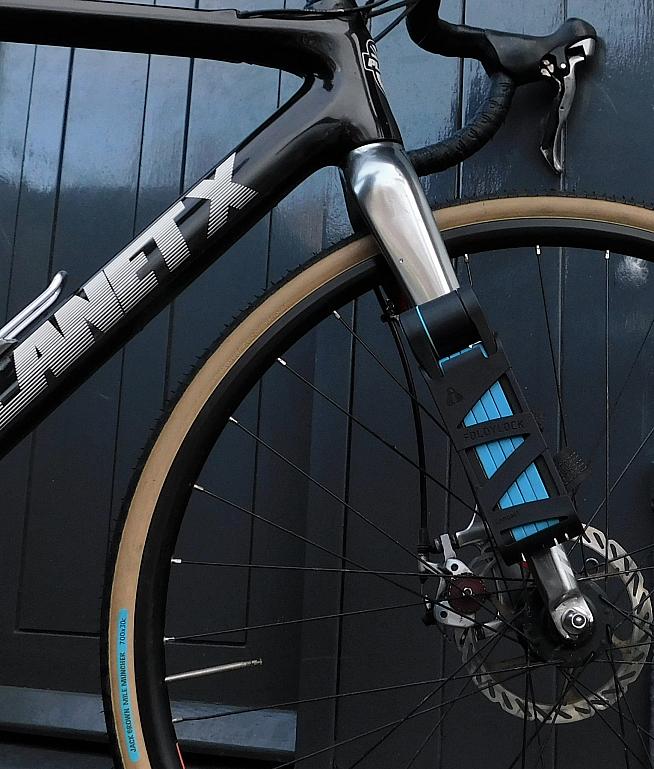 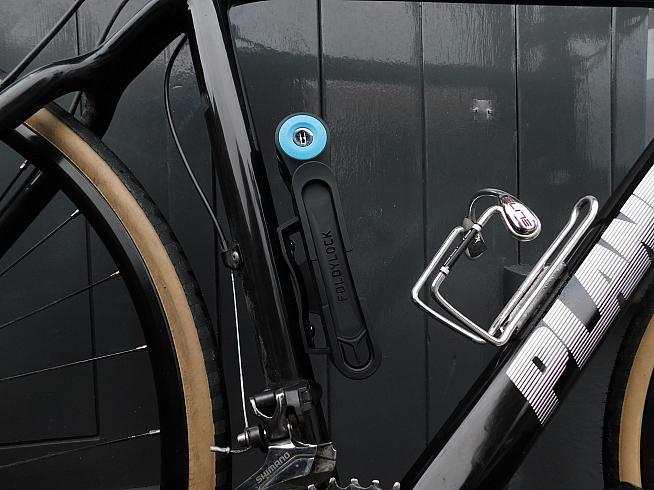 ...but if you don't need two bottles the cage mount option is best.

To be fair to Seatylock, their claim that the lock could be carried rattle-free was true, wherever I placed the lock holder. If I wasn't so precious about the look of my bike, the lock and holder would've been fine attached to one of the two sets of bottle bosses I have on my frame - and this is how I imagine most commuters would choose to carry the Foldylock. After all, you rarely need two bottles on a commute or if you're riding around town.

However you choose to carry it, the Foldylock certainly takes up less space and looks a whole lot neater than a D-lock.

If you're looking for a lock that hits the sweetspot between quality, size, looks and portability and you are prepared to pay a premium, then the Seatylock Compact takes some beating.