Giant are the biggest bicycle manufacturer in the world, and it's an open secret that they manufacture frames and parts for other big manufacturers.

Until 2019 it seemed all of their componentry was emblazoned with the same logo as their bikes, but just before that year's edition of the Tour de France, they relaunched Cadex as a brand name, having previously used it on what was arguably the world's first commercially produced carbon fibre bike, back in 1987. 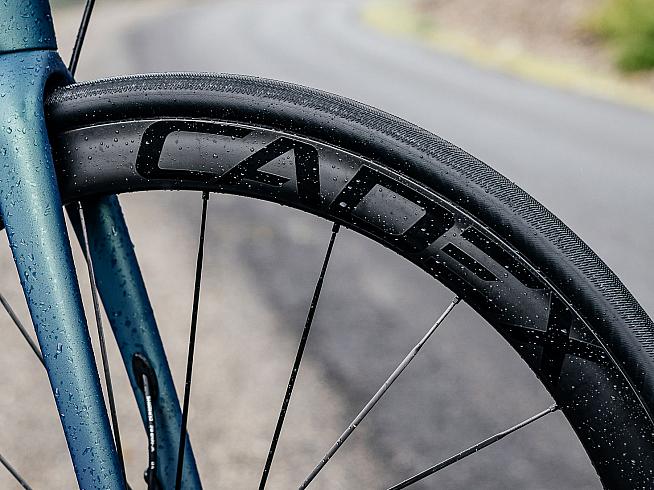 Cadex is a recently launched brand of premium components from Giant.

Of course, many big bike manufacturers have their in-house component department. Names like Roval, Syncros and Bontrager aim to distance themselves from their Specialized, Scott and Trek origins partially, I believe so that they can shine as individual entities, and partly for bike snobs to adopt their products without having a conflict of branding.

There are some cyclists who would feel aggrieved at seeing, for example, a Specialized road bike rolling on Bontrager wheels, or a Trek with Campagnolo wheels.

But, partisanship aside, if you're really interested in what makes your bike better for you, you should not be so picky about a name - nor about "matching" brand names.

Cadex components were at the heart of Giant's sponsorship deal that saw them supply bikes for the CCC Team, as a sort of budget-is-no-issue answer to Specialized's S-Works. The launch last year introduced a range of wheels and tyres, aimed at the high-performance end of the market.

A baker's dozen of months further down the line and some of this goodness has trickled down to us mere mortals. An avowed aim of the Cadex project is to encourage cyclists to abandon tubular tyres in favour of their tubeless version, attempting to replicate their suppleness and performance in a more accessible medium. To do this, they have launched a range of road tyres to rival anything on the market.

The range is split into two lines, Race and Classics. Unsure if I was anything near the target demographic, I agreed to try a pair of their Classics Tubeless tyres. 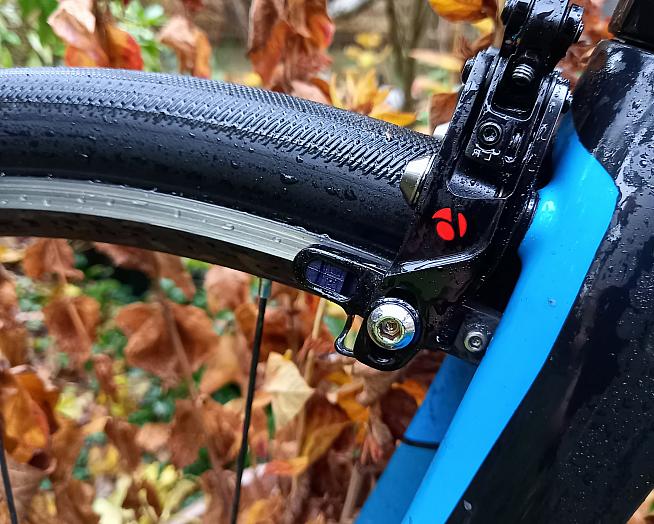 I have recently started a new job in a town 10 miles away, and do a daily commute over a variety of surfaces - smooth tarmac, bumpy cycle lanes and side streets, NCN gravel and muck strewn B-roads. After a week of alternating between my road bike and my gravel rig, I was forced to concentrate on my carbon Trek Domane as my alloy gravel machine was being upgraded.

I'd recently invested in a pair of Continental GP5000, enticed by seductive talk of how wonderfully supple and grippy they were. Whoever said this was a supreme bullshitter - aside from a few teething troubles in getting them to seat properly on my Bontrager rims, they cut up horribly - so much so that after just a few days I experienced my first tubeless failure.

Luckily, I have my winter 'guards on otherwise my lower legs would have shone up under ultraviolet light like an axe murder crime scene. Light-sensitive Muc-Off sealant could not plug the gaping hole in my rear tyre, and a few days later the front suffered the same fate. Thankfully, I had a tube with me on both occasions and apart from the hideous mess, my cycle outing on both days was not curtailed.

A pair of Cadex Classics 700x28c tyres had recently arrived for me, and now seemed like the ideal time to pop them on. 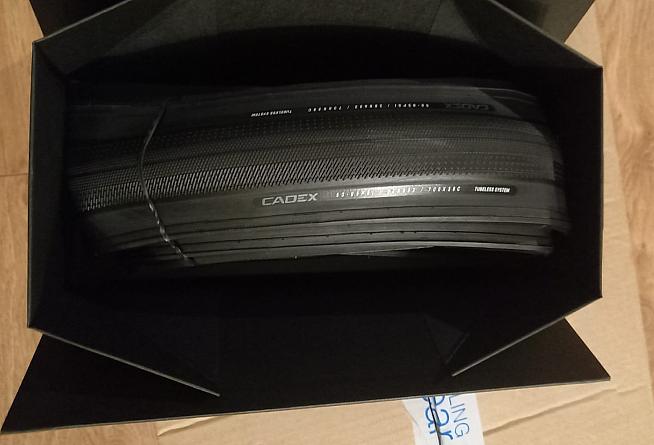 First impressions were excellent. The packaging is very swish, velcro-sealed boxes reflecting the £64 price point at which they retail (undercutting the GP5000 by a few pounds, where I got mine). Out of the box, the Classics felt more substantial than the Contis, with a tread pattern over the whole of the tyre.

Cadex claim that the compound used promises "outstanding grip and confidence without compromising on speed" and the feel of a tubular in a tubeless tyre. All I was really interested in was one that would get me to work without the constant fear of a toe shower and a roadside dance with levers and CO2 canisters.

Their bead was akin to the Pirelli Cinturato tyres I'd had on my gravel bike - slightly thicker, more rubbery than the standard kevlar bead of the GP5000 - and this made for easy installation and inflation. No need for me to dig my chamber inflator out of the shed; both tyres seated with minimum fuss and a standard track pump.

I had no tyre sealant to hand, so apart from the tubeless residue from having the Conti's on, they were run with just the merest hint of Muc-Off to seal any potential leaks. Thankfully there were none, and I continued to ride them for over a week, pressure still holding true over 160 or so kilometres.

On the road, they ran quite fast and although I was initially sceptical about their grip, they seemed to outperform any tyre I'd experienced recently. I'm not addicted to cornering hard, but I reckon I will reach my limit before these tyres do, especially on wet country lanes. 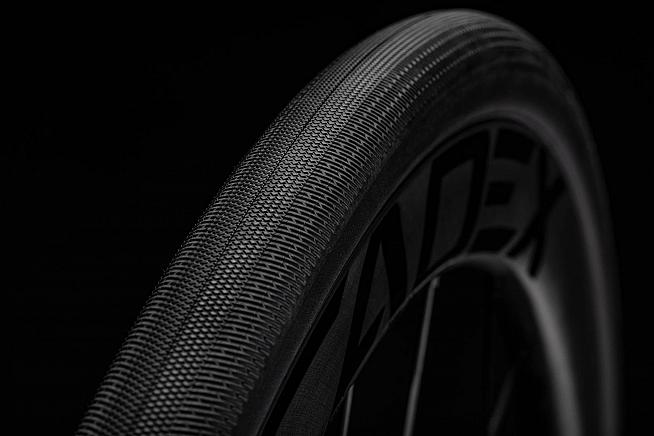 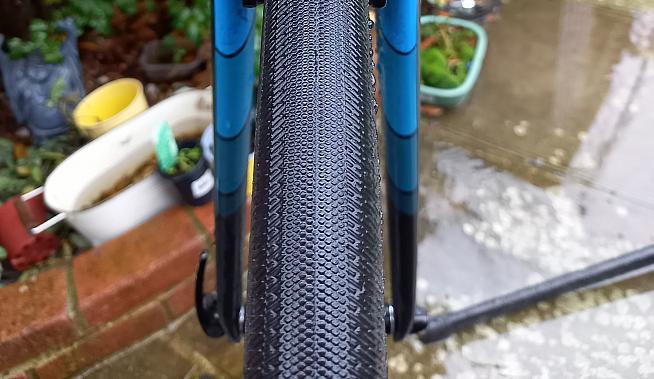 The low profile tread is exceptionally grippy - but not at the expense of speed.

I had noticed a lot of chatter from my forks before running the Cadex tyres but since switching the only chattering noise I hear is my teeth on my chilly early morning commute.

They seem to carve a path through fallen leaves and smooth out the difference between different County Council's interpretation of what finished tarmac should be like. As a result, I'm less wary of road imperfections and ride the lines I want to, potholes excepted.

My wheels still spin up as fast as they did with the so-called premium pedigree of my tyres' Teutonic predecessors, and if smoothness is the secret to speed, I cannot see how these tyres can be bettered. 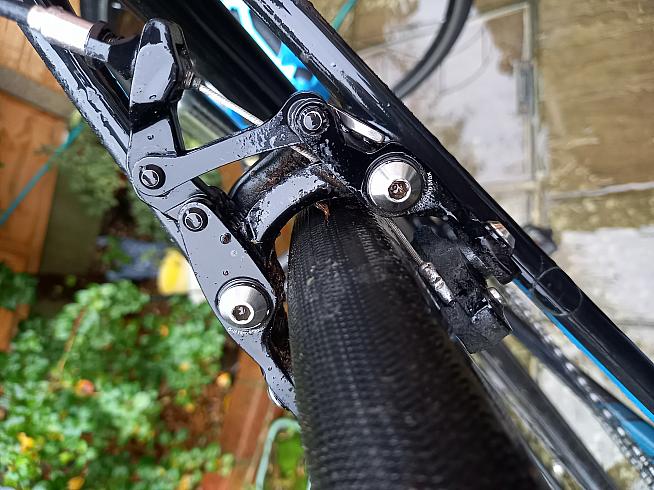 Clearance is tight with my rim brakes - but most disc brake bikes will easily take 28c tyres.

As an aside, I like to run as big a profile tyres as I can - the nubbins on these 28c tyres kiss gently on the insides of my forks, making a barely audible hum that only amplifies during out of the saddle efforts. Basically, they're big 28s, and all the better for it.

The Classics range is available in three sizes: 25c, the 28c version tested, and a 32c option. The 28c tyre comes in at a claimed weight of 315g, or 345g for the wider 32c version - which is competitive for a tyre of this class.

I cannot speak yet for their durability, but since they haven't punctured yet they're outperforming the tyres they replaced admirably. Speaking of punctures, Cadex claim the Kevlar Race Shield+ layer on their new Classics tyres offers 34% more protection than their original Race Shield, with negligible impact on acceleration.

I haven't ridden tubular tyres, but if Cadex's claim is true, I can understand why the pros insist on riding them. I wouldn't have the patience to glue tubs on and I'm pretty sure my wife wouldn't let me near that amount of powerful solvent anyway. These tyres are truly remarkable, in the same way that S-Works Turbos are, but without the silly sods "can't be used on your old bike frame clearance" sizing.

The rubber I'm now running makes me worry less about its performance and more about mine. With nothing to blame my tyres for, I can concentrate on my Local Legend status and knocking another minute or so off my daily commute.

Plus I arrive at work or home a little less physically battered and stressed. That's got to be a bonus.