If you've ever taken part in a spin-class you'll know that an eclectic mix of banging techno at volume eleven paired with breezy ambient pop can help distract the mind from the screaming pain coming from your legs and lungs.

Out on the road though, such a musical distraction can be fatal - wearing headphones can shut you off from the outside world and the sounds that we are constantly assessing for danger. Those who do risk wearing headphones can end up riding with just one earphone in, or end up playing music at such a low volume that they might as well not bother.

If you think that listening to tunes whilst cycling on the road is a recipe for disaster, you may want to think again. AfterShokz have come up with a nifty solution for all those cyclists who'd love to listen to their favourite songs when riding out in the wild, but still want to be in tune with their surroundings. 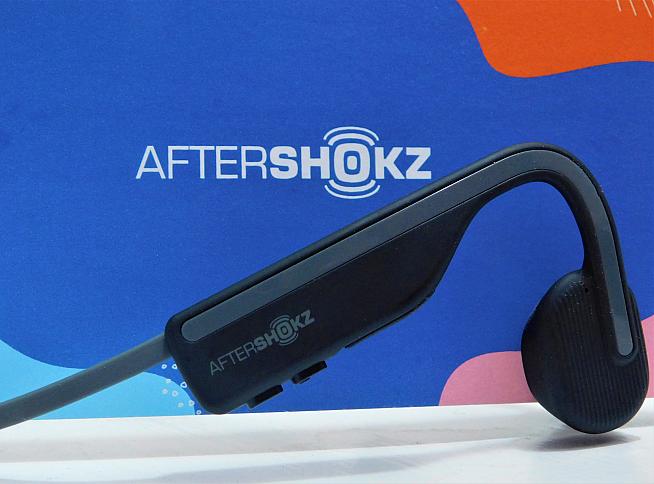 AfterShokz's solution to this problem is based on the elementary physics that enables tin-can-and-string telephones to work so effectively in the playground: namely, that sound waves are conducted better through solids than gases.

Rather than fitting on or inside your ears, AfterShokz headphones sit on the bony part of your head just in front of your ear, and use physical vibration of the skin and skull to get the sounds inside your head, leaving the user's ears free to listen out for danger!

It's a crazy-sounding idea that has to be heard to be believed. I first came across similar technology when I lived in Japan over 20 years ago. Some bright spark invented a vibrating musical lollipop holder which you could buy for a couple of thousand yen (about £10) in a variety of garish colours.

You pushed the lolly stick into the device, flicked a switch, and when you bit down on the end of the sweet, vibrations were transmitted up the stick, through the candy and into your inner-ear via your teeth and jaw bones.

The vibrations were interpreted by the tiny bones of the ear and turned into nerve signals no differently than if they'd arrived via the eardrum. The brain translated all this and 'heard' the sickly sweet J-Pop tune that was rattling on in your mouth. The experience was similar to the way that you could 'hear' space dust popping away on your tonsils as a kid. 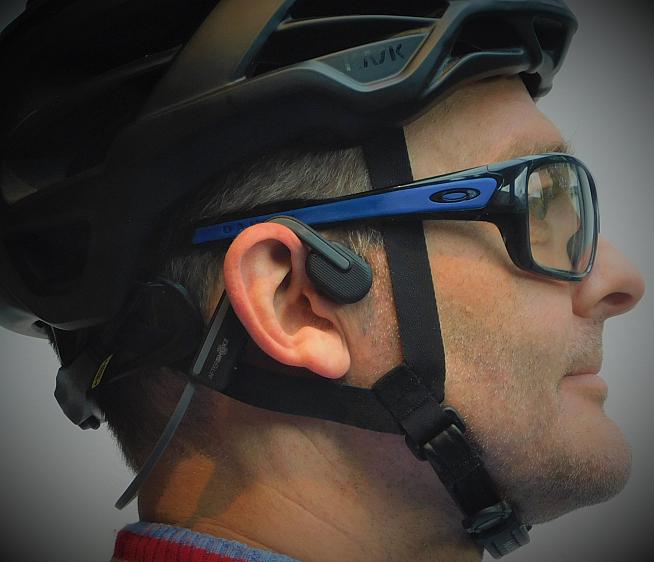 All the disco none of the danger - Alex is alert to aural hazards. Photo: Rosie Beyfus

In the two decades since I first experienced it, I'm pleased to say that AfterShokz have got rid of the lollipops, refined the technology and added Bluetooth connectivity to create a very credible alternative to standard headphones.

First impressions of the AfterShokz OpenMove headphones out of the box were good - they look and feel well made.

Two smooth pads that emit the vibrations clamp gently in front of the ears, connected together with a one-size-fits-all fine flexy band which loops round the back of the head just above the nape of your neck. On the right hand side, in a boxy unit that sits behind the ear, there are two buttons for controlling the volume, with one of the buttons doubling as an on/off switch through a longer press.

Although small, the buttons were easy to locate and press when cycling - even when wearing thick winter gloves. Another multifunction button, discreetly located beneath the trim, lets you skip forward and back between tracks using double or triple clicks.

It would be nice if the built-in microphone for making phone calls could double-up as a voice activated controller, but perhaps this will appear in future versions.

On the same side there is a USB-C charging port (protected from the weather by a small plastic flap) and a discrete on/off indicator light. A single charge lasted me just over four hours, and when down to just 20% a plaintive voice asks the user to "Charge me" in much the same way that a holographic Princess Leia tells Obi-Wan "You're my only hope". This control unit is a little bulky to look at, but sits comfortably enough against the skin behind the ear.

Incidentally, the disarmingly sexy robotic voice assistant who says 'Welcome to AfterShokz', 'Mute on/off', 'Charge me', etc is called 'Audrey' - which is a bit of a passion killer as I'm sure her last job was working in Mike Baldwin's sweatshop in Coronation Street.

Some may think the OpenMove headphones look a little odd - more 'David-Brent-wearing-Bluetooth-headset' odd than 'Cool-dude-wearing-Air-Pods' odd - but given how many cyclists are prepared to spend small fortunes on absurdly pointed TT-helmets or unfeasibly large shades, I don't think the looks will put off too many buyers.

Besides, on the bike most riders would always be wearing them with a helmet and shades, so they aren't as conspicuous on cyclists as they may appear on a jogger's head.

My ears are being overworked at the moment, having to hold up my glasses as well as a Covid mask at coffee stops. Fortunately, the Aftershokz fitted comfily even with all this extra clutter, although I did find that I couldn't wear the headphones under a windproof headband as it squeezed them too tightly against my skull. 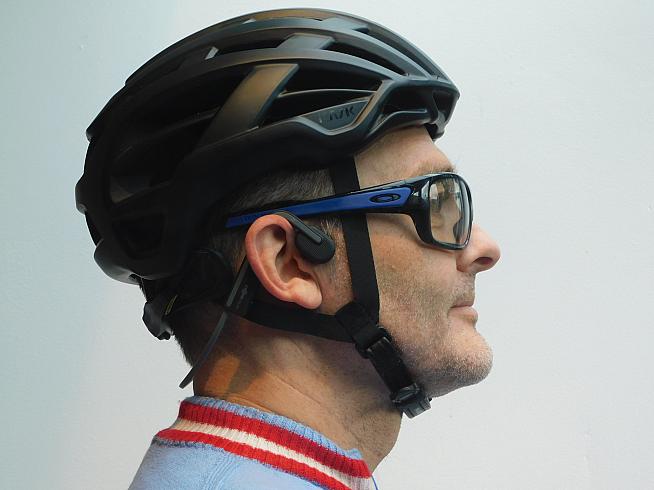 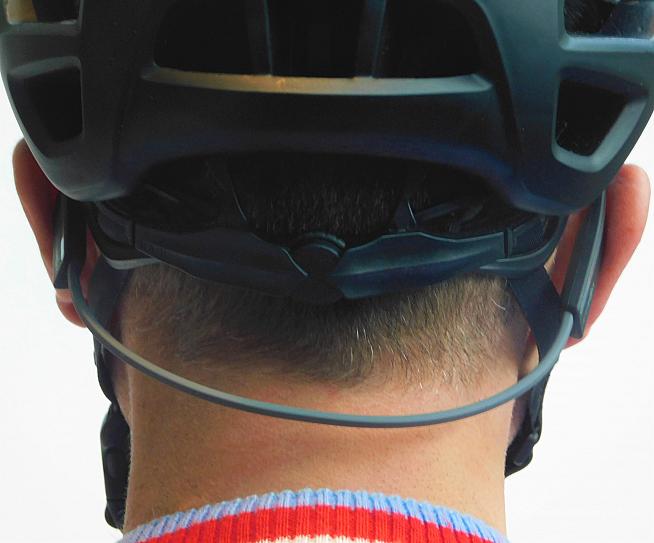 Nothing to see here... the headphones are relatively discreet beneath a helmet. Photo: Rosie Beyfus

Under a winter cycling cap with ear flaps they fitted fine however, and it goes without saying that they should be fitted over helmet straps, rather than under, so that they don't do your head any damage if you do come off the bike. I did find that the headband rubbed against the higher collars of some jackets I wear when cycling around town, but was fine when wearing a standard cycling jersey.

Similarly, when in the drops with my head up the band flexed a little against the top of my back, causing the pads to move around, but nothing that was so irritable as to make me want to take off the headphones.

When not in use, the magnetised pads snap together neatly which means you can wear the phones round your neck rather than stash them in an overcrowded jersey pocket, where the flexy headband can get in the way. The headphones do come with a neat drawstring carrying case, but as it isn't fully waterproof I can't really see it being useful for cyclists. 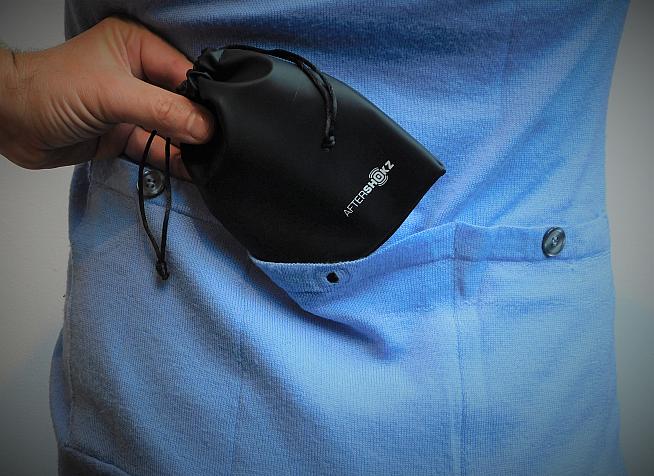 While the headphones are water resistant the carry bag is not fully waterproof. Photo: Rosie Beyfus

Also included are a pair of earplugs, for when it's safe to fully immerse yourself and block out background noise, eg on trains, aeroplanes, family gatherings, etc.

So much for their appearance - what do they actually sound like?

Amazingly, music comes through the pads clear and distortion-free, but without giving the listener the all-embracing, cocooned feeling that modern noise-cancelling earphones are carefully designed to produce.

I found my mind semi-immersed in the music but not locked away from the 'here-and-now' of the outside world. Cycling around town, I found I was able to quickly and easily tune out the music playing without adjusting the volume, so that I could hear and respond to the traffic around me. On quieter stretches of road, my mind was able to switch back and enjoy the music, whilst blocking out the sound of the wind in my ears.

On longer rides, the headphones really came into their own though, and were a joy to use. I really did feel that I could enjoy tunes without worrying that I wouldn't be able to hear that tractor round-the-bend, or the impatient driver tail-gating me on a country lane. 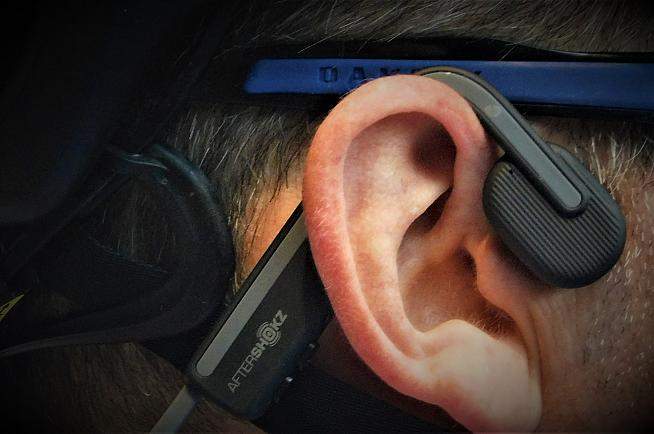 Surprisingly, I also found myself using the headphones when riding my stationary trainer at home; which is better than blasting out music from speakers that annoys my family and scares the cat.

I usually hate wearing headphones when training, as I start to feel really claustrophobic when doing long threshold or VO2 max efforts. If you've ever squirmed through 'Uncut Gems' on Netflix, or watched Ray Liota's last day of paranoid freedom in 'Goodfellas' before the FBI get him, you'll have some idea of how I usually feel when riding hard with headphones on.

Wearing the AfterShokz headphones though, my mind was able to get some respite from the intensity of the intervals by mixing in the music buzzing through my skull with the humdrum everyday noises around me. The experience is a little like having a set of emergency ears you can use to bail out when things are getting just a little too intense inside your head.

The AfterShokz OpenMove are an ingenious set of headphones that allow riders to enjoy tunes whilst keeping their ears free to listen out for danger.

The unconventional looks might put off some buyers, but it's a small price to pay for safety if you're a commuter who simply must cycle to music, or a lone rider who wants some company during long days in the saddle.