The Adventure Series is a set of bike bags from online retailer Wiggle's house brand Lifeline.

They are aimed at the price-conscious commuter who wants to carry luggage on their bike rather than on their body, or the occasional day-tripper or tourer who doesn't want to spend a fortune on bike-packing kit that they may rarely use. 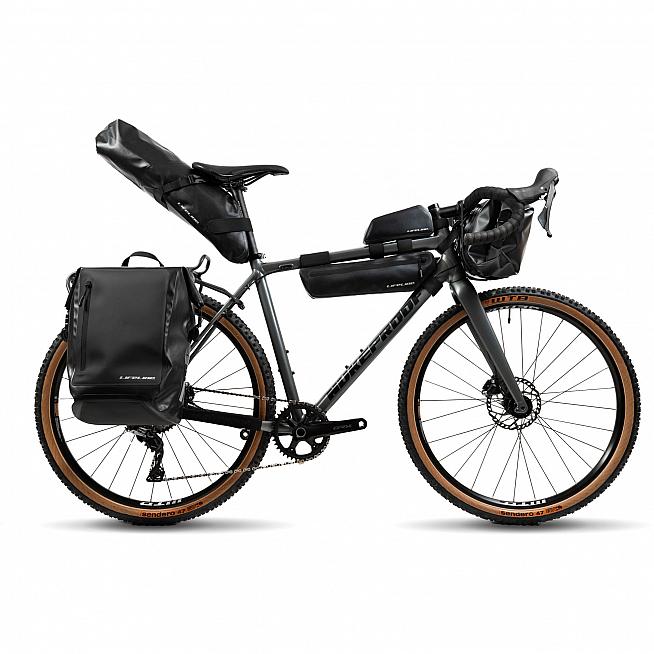 The Lifeline Adenture series from Wiggle offer an affordable entry to bikepacking.

There are five bags in the range, including a traditional rack-mounted single rear pannier bag (not reviewed here), and four bags which strap on to various parts of the bicycle:

As these four bags don't require extra racks, fittings or frame mounts, they are ideal for cyclists like me who want to have a go at touring but don't have any front or rear dropout eyelets on their bike.

Sure, there are racks out there designed for fitting to frames and forks with no bosses (eg Thule's Pack'n Pedal Rack), but they require more fettling and fitting faff than many of us can be bothered with - especially if it's just a quick trip we're planning.

Anyway, compared to the traditional lower mounted double front and rear panniers, bike packs tend to weigh less and carry considerably less luggage. This forces you into a zen-like minimalist packing mode, which you'll really appreciate when you are busting your lungs trying to cycle up even the slightest slope after a long day's ride.

Rather than sticking out at the sides like panniers, bike packs are fitted in line with the rider's body which means in theory they are more aerodynamic, and are less likely to get struck by the rider's feet - a particular problem on smaller frames with racks.

Although there is nothing stopping racks and panniers from being used alongside frame bags, it is becoming increasingly common to see riders pass-up on the former and loading up with the latter, for the reasons described above as well as the desire to be seen as a modern day 'bike-packer' rather than an old-school 'cycle-tourist'. 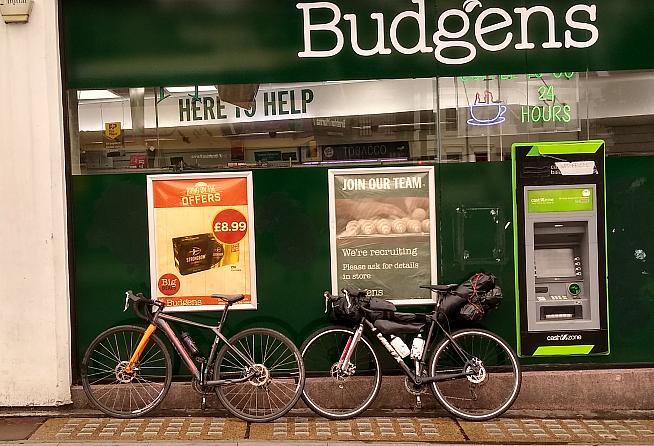 For me, testing these four packs was the perfect excuse to plan an overnight trip along the South Downs Way and some of the wonderful roads that shadow it. My wife, who, like many MAMIL widows, has become a Corona-lockdown convert to cycling, agreed to come along as well - on condition that I carried all our stuff!

OK, this was no Trans-Continental Race or Race Across America, but the packs were loaded up to the max and beyond the breaking point of one of them! Besides, previous trips have taught me that it doesn't take long to realise what things you should have bought and those which you wish you'd left behind, as well as discovering the pros and cons of your chosen equipment and set up.

First impressions of the packs were very favourable. The Lifeline range is aimed at budget-conscious riders, so it was surprising to see that they'd used a very waterproof fabric (the nattily named Lightweight 300D Polyester Ripstop with TPU coating), with neat looking fully welded seams, and protected zippers. 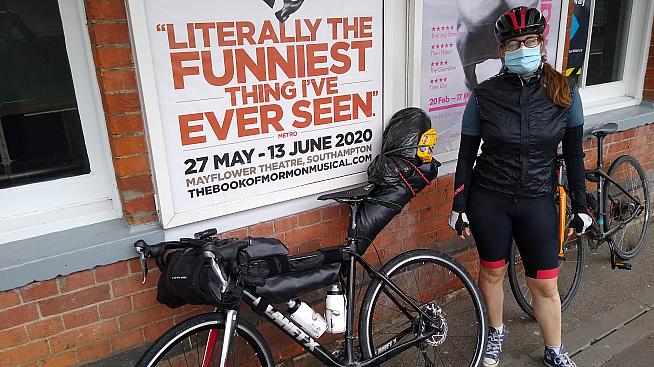 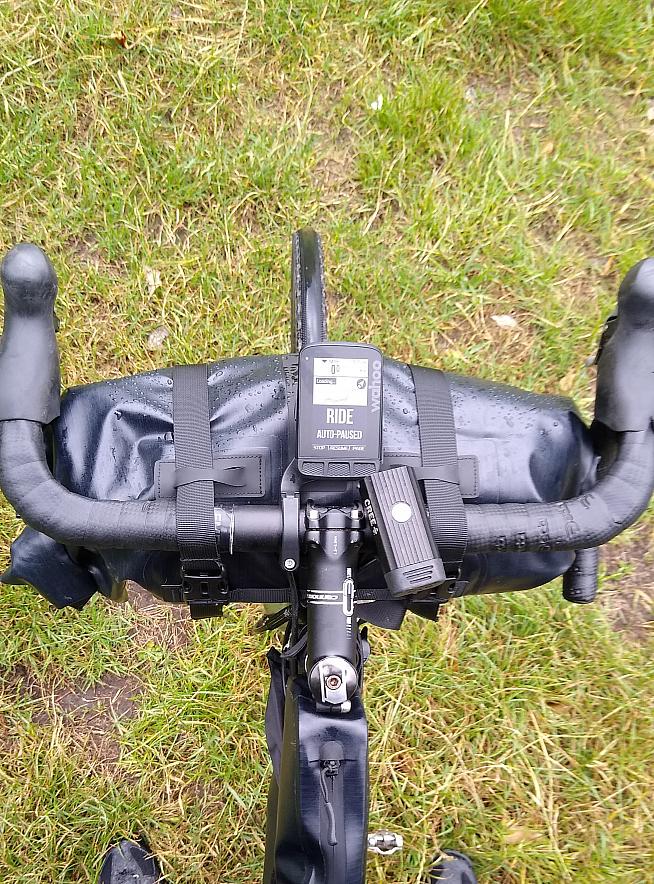 You can pay a lot more for a lighter, fancier looking set of frame bags, but these are often only showerproof. Ironically, this means you can end up adding precious weight and volume by sticking your vulnerable kit in plastic bags first, or run the risk of spending the night in soggy jim-jams. The waterproofing on the Lifeline bags certainly did its job keeping our stuff dry after riding through a few showers and a night out in the rain next to the tent.

The lack of any inner compartments in any of the four bags tested did make it a bit fiddly to find those small items you've packed away. Nor do you get any extra external pockets or bungee cords supplied, although there is some webbing to be found on the seat pack and handlebar bag if you need to go large and strap-on extras like the ubiquitous bike-packers' tin mug, or a pair of flip-flops. 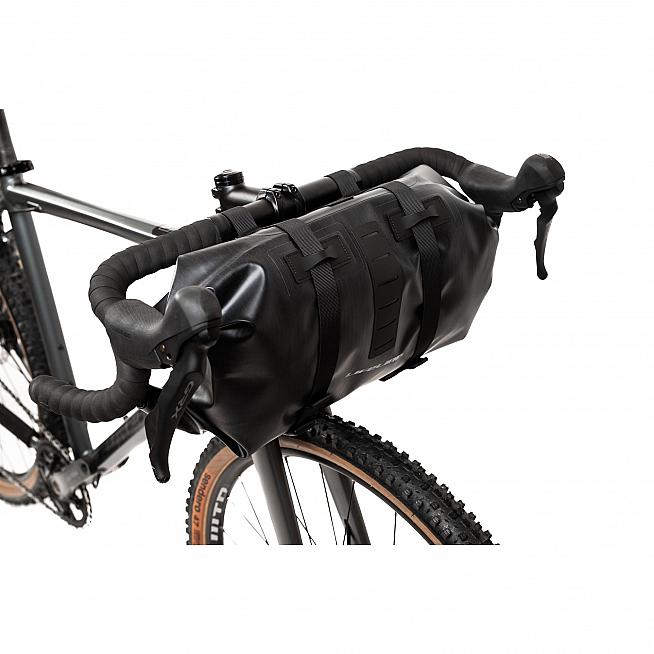 Although there was room for carrying much more in the bag, the width of my drop bars (44cm) prevented it. The bag was held securely to the tops of the bars by two sturdy looking straps, whilst a third strap secured around the head tube prevented the bag from swinging back and forth. However, the bag did squish the exposed brake and gear cables. Although this didn't impact on my braking or shifting, it is something that could lead to problems with some bike's cable set-ups.

The bag took up all the space below and between my bars, meaning that I couldn't ride in the drops at all, and could only rest my palms on the tops of the bars rather than grip them fully.

Although I'm happy riding in the hoods most of the day, on descents I would really have liked to have been able to use the drops to control the bike, especially as the high centre of gravity made the bike feel top-heavy and ready to topple over on steeper sections.

This isn't really a fault of the bag, but it does explain why wider flared handlebars are a popular choice with multi-day riders - offering space for more luggage and greater control in the drops. 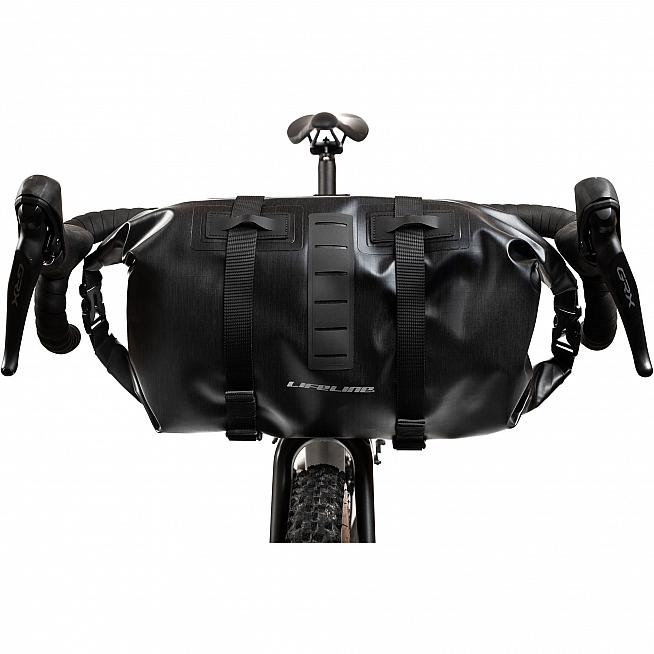 If the bag could have been suspended from the tops of the bars, rather than strapped tightly to them, there would have been room to fully grip the tops and get a bit of relief when riding up the steeper slopes we encountered. This would have meant the bag would have been hanging even closer to the front tyre though, which had already given me enough of the heebie-jeebies to move my stem up in an effort to get some safe clearance. 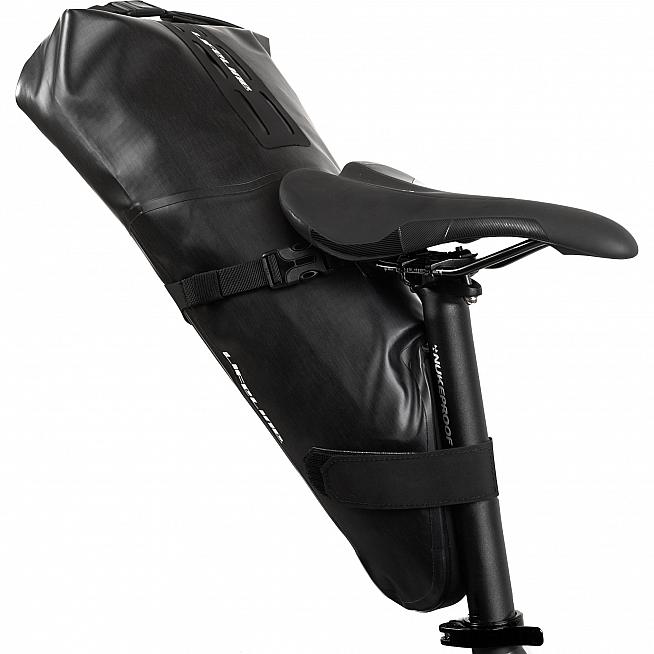 Looking like a saddle-bag on steroids, this is the pack that stuck out most in the test - both figuratively and literally. Its rooster-tail looks certainly raised a few smiles from passing cyclists, but did mean that I didn't need a mudguard in order to keep the rain off my arse.

Using the same roll top closing technique as the handlebar bag, weirdly the securing buckle was smaller and more fragile on the seat pack. Similarly, the straps used to secure the pack to the saddle rails were also smaller than the corresponding straps on the handlebar bag, and weren't really up to the job.

The thinner seat pack straps seems to have been designed to carry less weight than the larger handlebar bag, but this ignores the fact that it is subject to greater strain at its fixings as it can swing from side-to-side when riding - especially when out of the saddle.

This strain on the straps is made worse if, like me, you decide to strap an extra load to the bag using the available webbing attachment points found at the top and bottom of the pack.

Add to that the battering the bike took when tackling a few of the off-road gravel sections of the South Downs Way, and I guess it's no surprise that something was going to break. 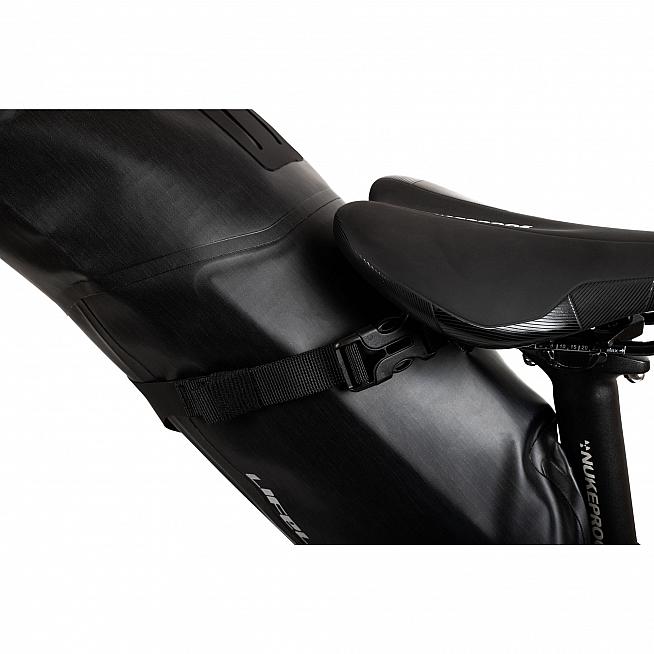 One of the side straps began to tear away from the body of the bag in testing.

On my test, the pack was loaded with a lightweight two-person tent, socks and underwear in the inside, with another sleeping bag wrapped in a bin-liner strapped to the outside of the bag with bungees - a total weight of less than 5kg.

The swaying of the seat pack was reduced a great deal by the wide Velcro strap that attached to the seatpost and didn't have any impact on my riding, but did lead to a tear in the seat pack fabric where the saddle straps were stitched to the bag: 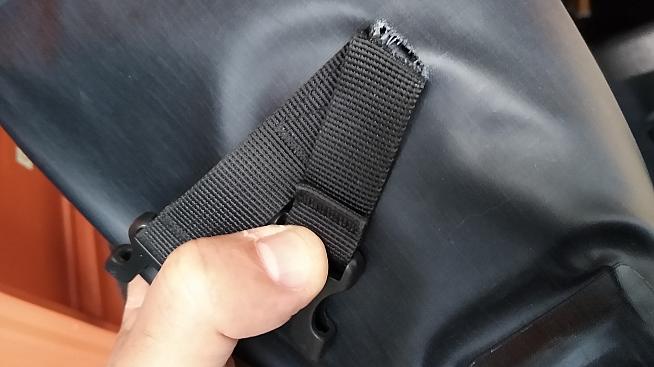 It's a shame, and something that I hope Lifeline will look to improve in a future version.

Otherwise, this is a good pack for the money - just don't push things too far when loading it. 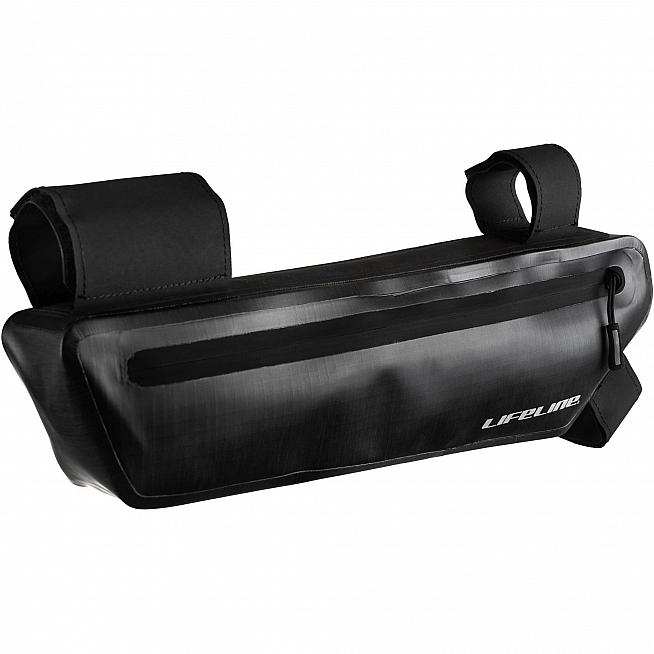 This simple boxy container fixes to the frame with three Velcro straps - two at the top tube and one to the down tube. The straps are a good width, and secure the bag tightly. They were long enough for me to use them to hold the tent-poles by trapping them between the top tube and the bag, without any subsequent swaying.

My Catholic mother would be proud of my ability to keep my knees together when riding - so much so that I will occasionally rub the top tube with them. I did have to learn to ride with my knees slightly further apart due to the bag, but when I did occasionally rub against it, the smooth material led to no discomfort and the Velcro straps didn't irritate as the soft side faces out.

I filled the pack with snacks for our ride, a small first aid kit and some toiletries. Items were easy to take out on the go due to the side zip which runs the length of the bag, and although some of the contents rattled around on the second day when the snacks stash started to dwindle, the fabric showed no signs of wear or tear from the rubbing. 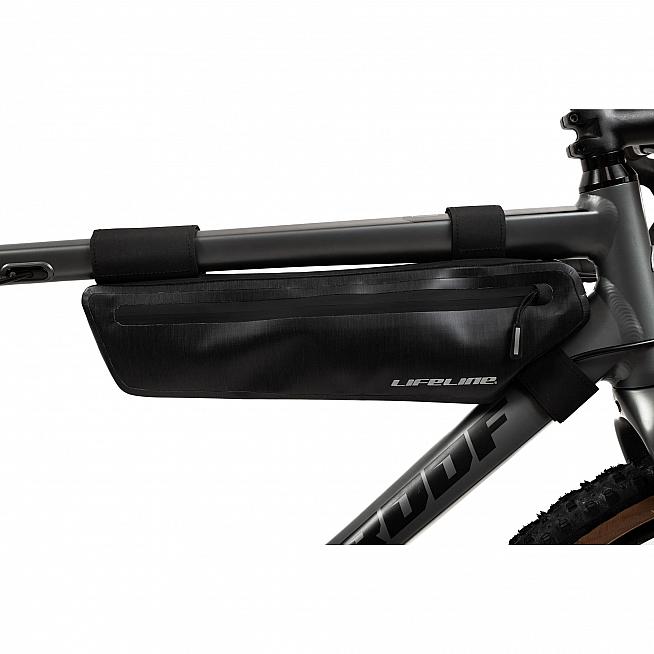 The tapered shape meant that the bag fitted snugly into the front triangle of my frame, and its length means that it should fit underneath all but the smallest frames.

A common problem with frame bags is that they can make it hard to get to your water bottle when riding, and I'd definitely think about getting a side-entrance bottle cage (eg the Lezyne Flow Side Load Cage) to overcome this irritating problem on future trips. 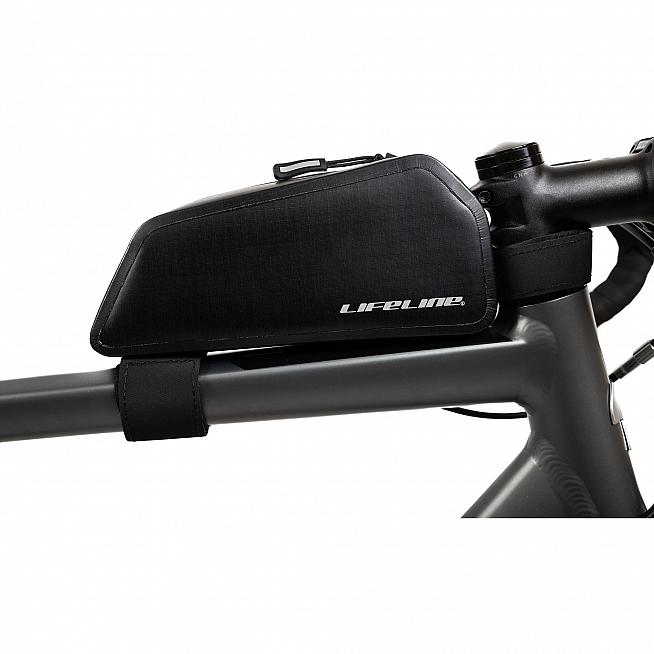 Like the matching frame bag, the top tube bag is secured in place with Velcro straps - one which fixes around the top-tube, and one around the top of the forks beneath the stem. Although small, I would have liked an extra Velcro strap for the top tube as I did find that this bag moved around a little during the test ride which could lead to some unsightly rubbing to the frame.

Again, this is a simple, boxy container, with no fancy compartments but excellent water-proofing. The zip enclosure is at the top rather than the side, meaning that it was more exposed to the occasional rain showers we experienced. To the bag's credit, no water seemed to get through due to the wide flaps that cover the zip. 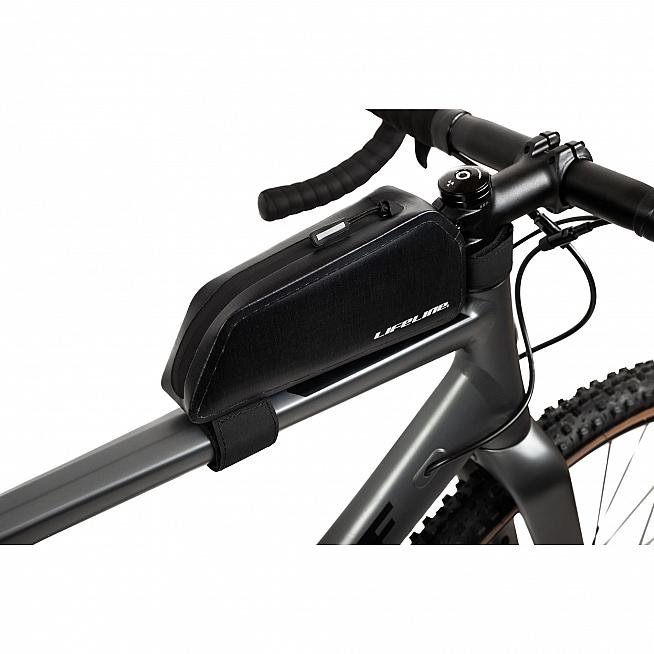 I managed to squeeze in three inner tubes, a multi-tool and a puncture repair kit, which all put a real strain on the zipper, but none of the contents poked out over the two day ride.

Overall, Lifeline have come up with a sound set of reasonably priced, no-frills bags with surprisingly good water-proofing for the money. Buy the whole set if you want to convert your bike quickly and easily for bike-packing at an overall cost of less than the price of a single high-end bag.

Consider adding additional straps to secure the rather flimsy seat pack, or swapping it out for a stronger, more expensive alternative if you need more carrying capacity or reliability. 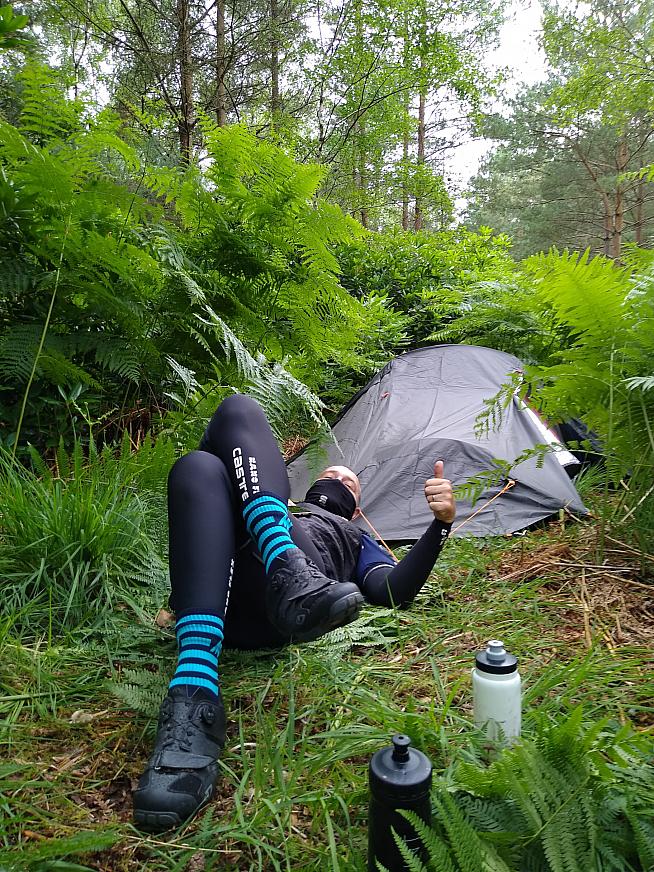 Pack up and enjoy the great outdoors.

Find out more about the Lifeline Adventure Series of bikepacking bags at www.wiggle.co.uk.