Wiggle's in-house clothing brand, dhb is fast becoming a monster in the world of cycle clothing - desperate to devour all competition - as it releases yet another niche range of clothing.

The aim of the new Aeron Ultra range is to provide technical clothing designed for 'epic' all day trips and 'multi-day bike-packing adventures' - an offering to the new generation of cycle-tourers, who eschew panniers for frame-bags, triple chainsets for 1x simplicity and OS maps for Wahoos.

With just four items of clothing in the range - men's and women's bib-shorts and jerseys - Wiggle are making baby steps in this market. But by getting design input from Josh Ibbett - victor of the 2015 Trans Continental Race, and former holder of the South Downs Way double - they have a real expert in their corner. 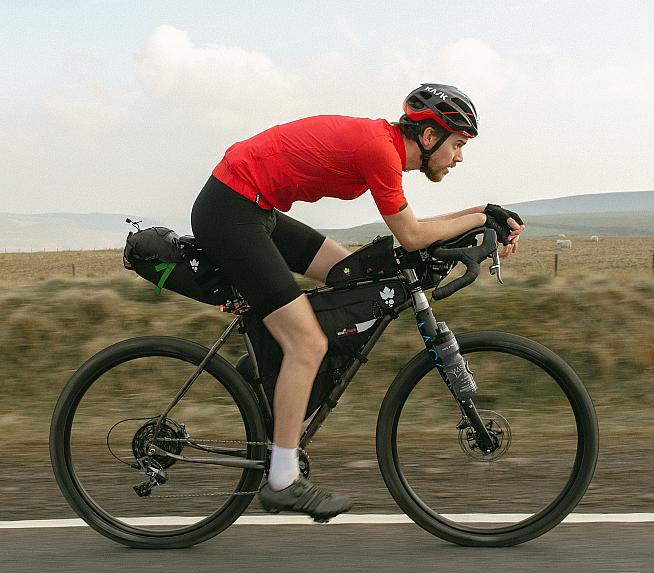 Ultra-endurance cycling star Sofiane Sehili was also spotted rocking a dhb jersey on his way to victory in the this year's Atlas Mountain Race.

That's already a decent palmares. But how does the Aeron Ultra kit performed when put to the slightly less rigorous test of sportives and the occasional bike-packing jaunt? 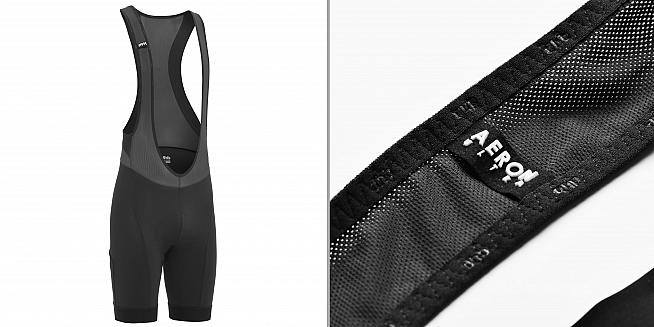 The Aeron Ultra bib shorts are similar to dhb's standard Aeron bib-shorts (which retail at £75), with a few design tweaks to cater for longer-distance and multi-day rides.

You get a similar Elastic Interface pad to that found in the standard shorts, but a very different fabric for the leg and seat panels, a thicker, softer elastic for the leg grips, and a slimline pocket on the right thigh panel.

Finding a comfortable pad is the holy grail for many cyclists - a quest that I've never actually completed. The Elastic Interface pad is a world away from the unpadded scrap of chamois loosely stitched into the crotch area found in my first pair of cycling shorts bought in 1988, and is a step up in quality from the same brand pad that was used in the previous version of Aeron bib-shorts I bought a few years ago.

Instead of the complex folds or channels found in many high end pads, the Aeron Ultra pad uses a multi-density foam and the elasticity of the material to shape itself to the rider's behind. The air pockets in the pad remind me of the Castelli KISS pad, and according to the blurb help to keep the pad cool and dry. Frankly, my arse was comfy and wedgy-free during testing for rides of up to 4 hours both on and off road. 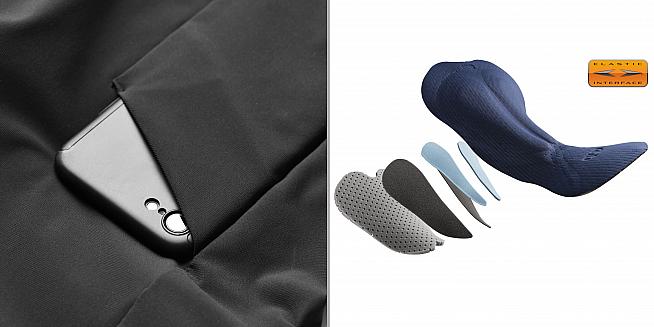 Although the material used for the Ultra's bib-straps makes them feel very similar to those used on the standard Aerons, the fabric used for the leg and seat panels is treated with 'Coldblack' technology which is designed to help prevent darker materials from heating up in the sun. Making a side-by-side comparison with the standard Aeron shorts, the Ultra's fabric feels thinner and appears shinier.

If the material used in the main body of the Ultra shorts is thinner and cooler, the leg gripper is made of a thicker, warmer and softer material than the latex-like elastic found in the standard shorts. The silicon woven into the elastic hems helps ensure that even when wet, the shorts won't ride up the leg and cause uncomfortable bunching. 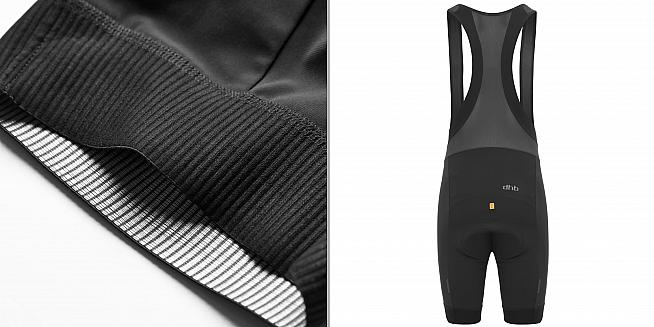 A more important difference is that the elastic on the Ultra bibs is stitched all the way around the bottom hem of the leg. This style of hem was on my first pair of standard Aeron shorts bought 7-8 years ago, but which has been replaced in recent years with a partially elasticated leg hem, which I much prefer. On me, fully elasticated hems tend to pinch the legs above the knee, making them look like two partially squeezed tubes of pâté, but I'm sure the more ripped cyclists out there won't suffer this small indignity.

Cyclists are a tribal bunch, with strange clothing rituals and signals that are unfathomable to the outsider. Old-school racers will use sock length and colour to indicate their vintage; serious commuters will reveal themselves through a subtly upturned reflective hem on their jeans; whereas understated design and Farrow & Ball coloured jerseys indicates that the wearer is a member of an exclusive 'collective' rather than a club.

And so it goes with pockets on the thigh of your Lycra shorts. The wearer is not just any old roadie out on a pootle, but should instead be seen as a serious all-day rider with places to go and espresso to drink. Like the funny little 'fifth-pocket' found on jeans, I found myself searching for something - anything - to hide away in it.

A multi-tool? No - I didn't want an allen-key jabbed in my thigh if I fell off. A banana? No - the gun-slinging-chimp look did me no favours. A gel? OK...there's room for a gel, but really, thank you, I'm happy with my jersey pockets all the same. 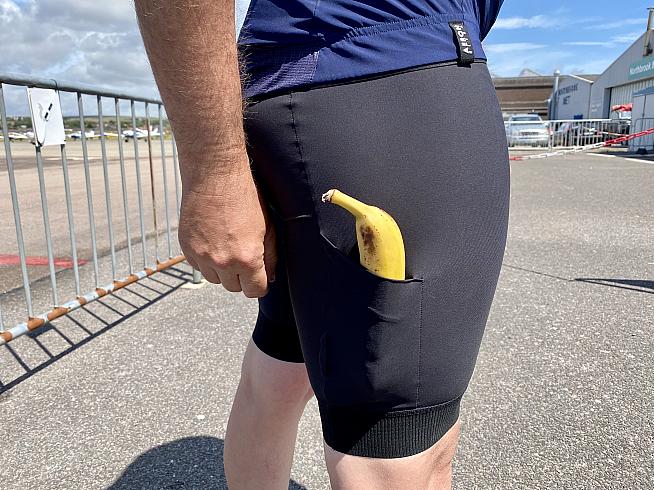 The pocket is a harmless addition, albeit a pointless one from my perspective, but I was annoyed by its presence regardless. The shorts are finished off with highly reflective tabs on the sides of the thighs, as well as reflective dhb logos front and back - a welcome addition on any piece of cycling clothing.

Overall verdict: The dhb Aeron Ultra are high quality shorts with a wonderful pad for long days in the saddle. Combined with a comfortable, quick-drying and easy-to-clean choice of fabric, these are the only shorts you'll need to take for multi-day cycling trips.

The Aeron Ultra Jersey tested here, is matched in function if not form to the Aeron Ultra bib shorts, with a design optimised for multi-day riding. The fit is racey - close fitting on body and arms, so as to be able to quickly wick away moisture, with a full length zip and some clever fabrics used to help with temperature control. 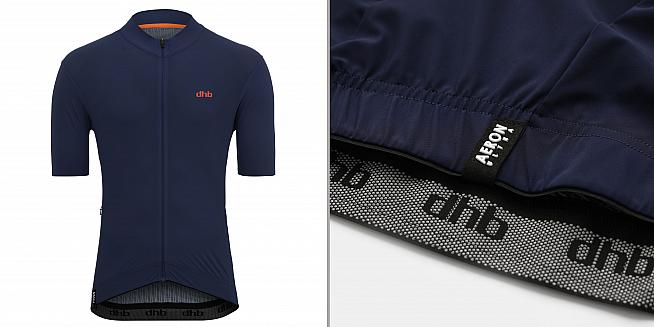 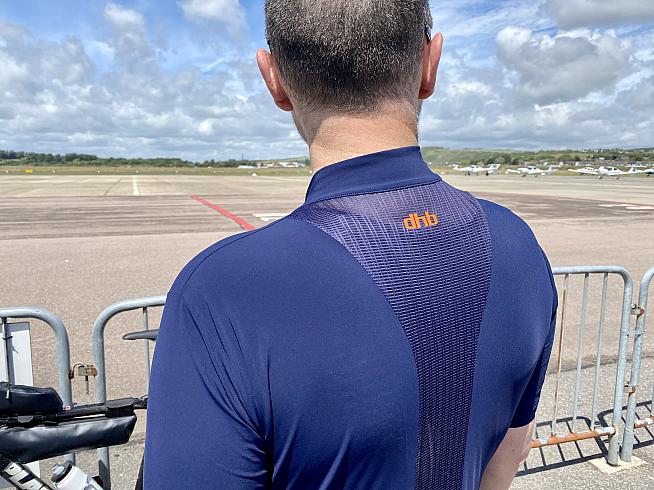 The main fabric used is described as 'Revolutional', with 'Coldblack' and aniti-bacterial treatment. Like the bib-shorts, the material used is close-knit, soft and lightweight with a noticeable sheen - similar to the finish found on a pair of old-school swimming trunks. Mesh patches offering greater ventilation are found under the arms, above the rear waist hem, and most noticeably down the spine of the back.

These patches certainly helped to keep me cool on a particularly muggy test ride, but do mean that you'll need to apply some sun-cream to the exposed areas of flesh to prevent sunburn on the hottest days. 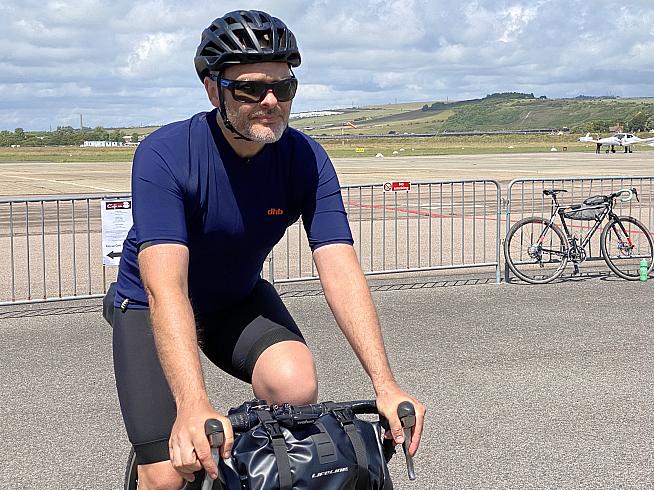 Most importantly, the fabric used is anti-bacterial which should help to keep away the odours. To test this claim, I wore the jersey on every ride for a week in the summer, and gave the jersey the kind of half-arsed rinse with washing up liquid it would get if I was on a multi-day ride.

After each ride, I would ask my disarmingly honest teenagers how bad I stank. The results were pleasing. I may not have come up smelling of roses after five days, but neither of them said that I stank like 'beef-lard' which I've previously been accused of. Importantly, this means that this jersey can be worn day-after-day, with no need for valuable bike-packing space to be taken up by a spare jersey.

The detailing is definitely subtle, with reflective strips on the sides of the sleeves and a large dhb reflective logo on the rear. The hidden orange hem on the inside collar is colour-matched to the main dhb logo on the front. Personally, I would have liked more of the orange detailing as it contrasts beautifully with the deep inky blue of the jersey. 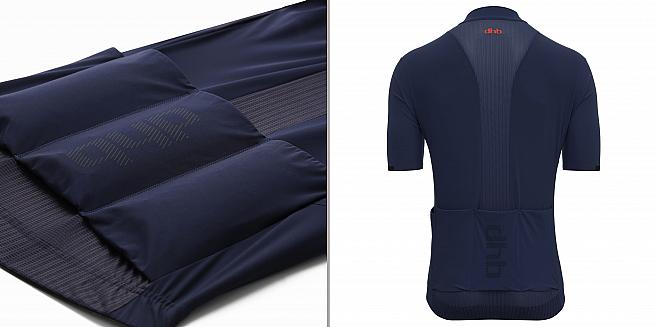 Once again, apart from the careful choice of fabrics, it's the addition of two side pockets - one zipped, one open - that signals the Ultra jersey is designed for all-day or multi-day rides.

Added to the standard array of three back pockets, this significantly boosts the luggage capacity of the Aeron Ultra over a standard jersey.

Are these extra pockets useful? Sure... but there's a but. By putting the only zipped pocket on the side of the jersey, it's tempting to put those valuable 'mustn't-lose' objects in there for extra security.

That's fine if it's an emergency 10 pound note or something else soft like a wallet you want to keep safe. If it's a phone or set of keys, however, I'd rather the zipped pocket was at the back in the middle, where the items are less likely to get broken or stab you in the kidneys, if you fall off your back and land on your side.

It's a niggling design flaw in my opinion, but by no means a deal breaker in what is an otherwise well thought-out jersey.

Overall verdict: Buy if you want a well-made and smart jersey that matches the Ultra shorts for all-day comfort. Its ability to stay smelling fresh day-after-day with just a cursory hand-wash is not to be sniffed at, but be wary of the zipped pocket. 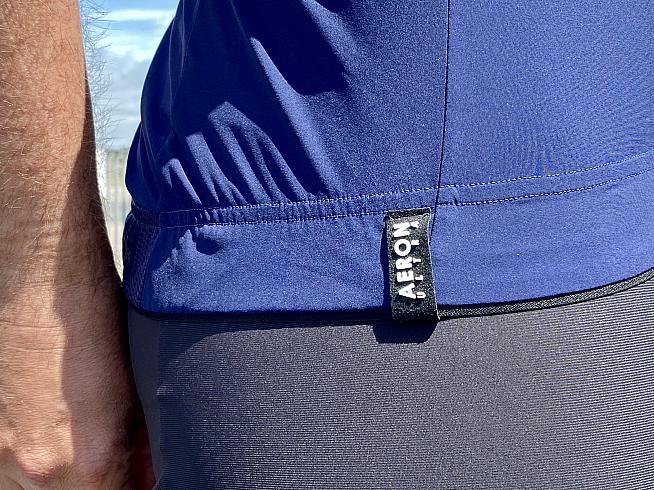 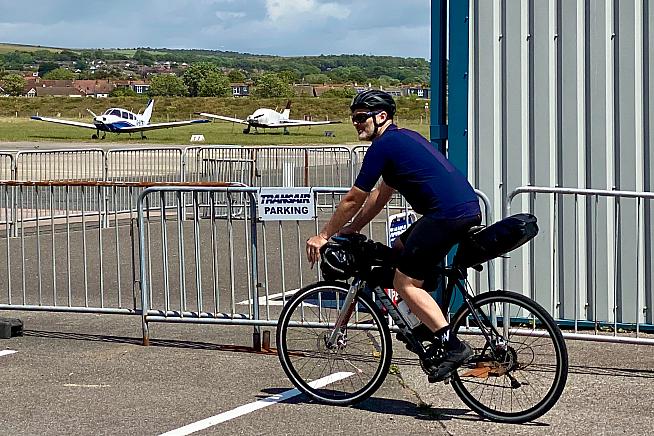