1984 was a good year - I had just started my thirty-year slavery to full-time employment, George Orwell's vision of a dystopian future was still just a science fiction story, and the best film ever made was released.

This film had a dubious leading man in Arnie Schwarzenegger, time travel, shotguns and explosions, Harley Davidsons, and that girl whose head spun around in the Exorcist. But for me, the best thing about The Terminator - for that is of course the film in question - was that you got to see things from the inside of the Terminator's eyes - a heads up display that showed lots of pointless text and machine code on the screen, which was essentially only for us viewers. No cyborg would read instructions from a screen - a totally unnecessary gimmick. 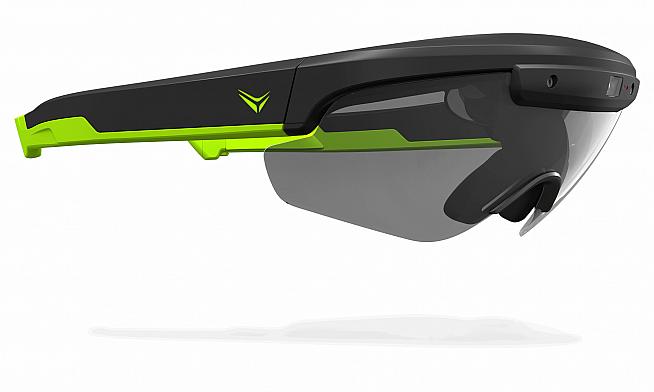 Raptor AR Smartglasses pack all the features of a cycling computer into a heads up display.

Like the Terminator, we're obsessed with data, whether it be a scrolling marquee during our favourite televised sports broadcast, news that we read while listening to other news, little-known factoids about our favourite celebs or the stations the train we're on will be visiting on its journey.

As cyclists we're especially guilty. Few athletic pursuits can compete with cycling for obsessive attention to performance data: from heart rate, power output, speed, elevation, gradient, even aerodynamic drag - dozens of metrics can be calculated and displayed in real-time as we cycle along.

How many kilometres cycled? How far to go? What's that in miles? Did I miss a turning back there? Is that an incoming text message? Have I just aced that Strava segment? The computer has the answer.

But some say these are distractions we could do without when we should be concentrating on the road ahead. If only we had a heads up display, like the Terminator in the 1980s... 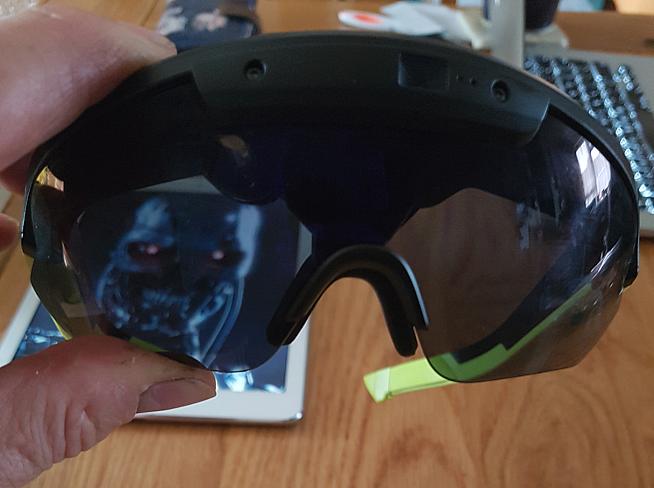 Step forward Everysight, pioneering makers of the Raptor Augmented Reality sunglasses. Based on headsets developed for fighter jet pilots, these sophisticated smartglasses encompass a customisable heads-up display, a GPS recorder, bone-conducting sound output, gesture control and an onboard camera capable of 4K video and stills photography, plus the ability to store your ride data, videos, photographs and music.

The Raptors pair seamlessly with your smartphone so you can manage any calls. There are even tinted lenses you can see through and the ability to fit prescription inserts if, like me, your eyesight isn't quite the full ticket.

If you think that sounds like a lot to pack into a pair of glasses, then you'd be right. The Raptors are pretty hefty on first impression - at least, relative to a pair of lightweight "dumb" sunglasses. In fact they only weigh 98g, and they turned out to be quite well balanced and comfortable to wear. 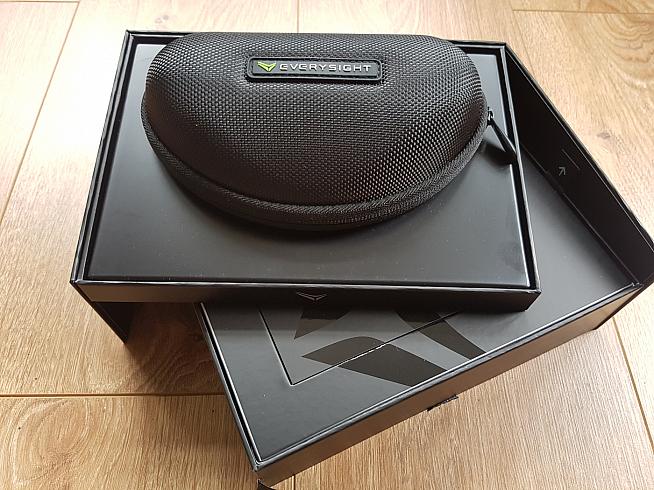 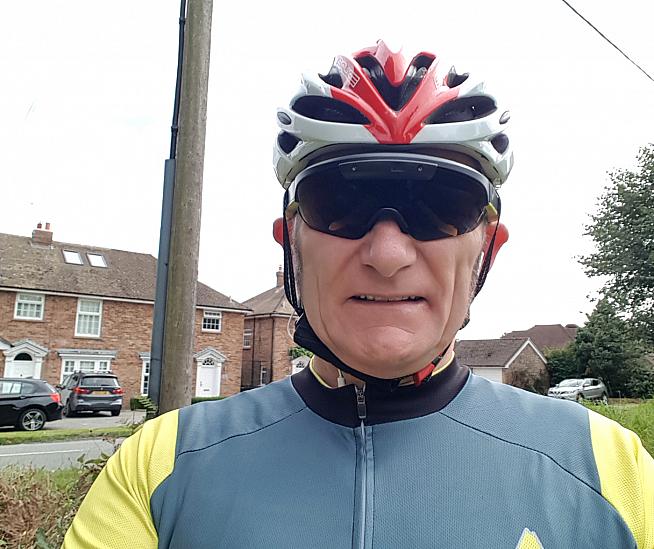 I am a friend of Sarah Connor. I was told she was here.

Out of the box, the first job is setting them up for a ride. There is a companion app for the Raptors that enables you to pair the glasses with your smartphone, but configuration is mostly done using the heads-up display (HUD. This was a new experience for me, and it took me a while to focus my eyes to see the display clearly enough to interpret the instructions and features.

Features are selected using a combination of swiping movements along the touch-pad on the right arm of the glasses, close to the temple. I found it initially difficult to gauge how hard or soft to swipe and tap, but eventually got the hang of it - at least while stationary.

As for pairing the Raptors to my other sensors on the bike and around my chest (heart-rate monitor), I found this an easy process - more-so than some computers that are supposed to work with them exclusively.

So what's it like cycling around Surrey with technology that was previously the reserve of fighter pilots and futuristic killer cyborgs stuck on your face?

On the road, I found the constantly updating text on the display easy to read, but hard to push to the periphery of my vision. I wouldn't say it was dangerously distracting though, and once I'd got used to the display it was strangely comforting to see the stats up there without having to risk a downwards glance.

As to the extra features like the onboard camera, well I tried taking some on-the-fly video footage and was disappointed to find that segments were limited to 60-second bursts. There may be a way to amend this default, but I have not yet found it. With a choice of 16GB or 32GB of onboard storage on the Raptors, it would make sense to allow longer video clips.

However, the quality of the video was very good indeed, even on the lowest resolution. Snapshots were also clear and pin-sharp. Once I'd got to my destination, it was easy to download my ride and the recorded footage to my phone and check it out. I could even share it directly with social media, just as I could with any other items I'd recorded with my phone. 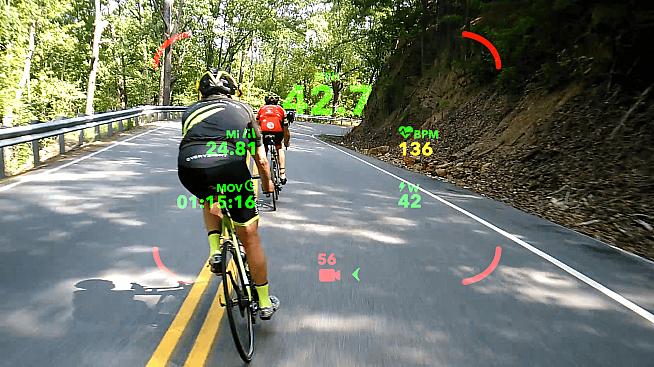 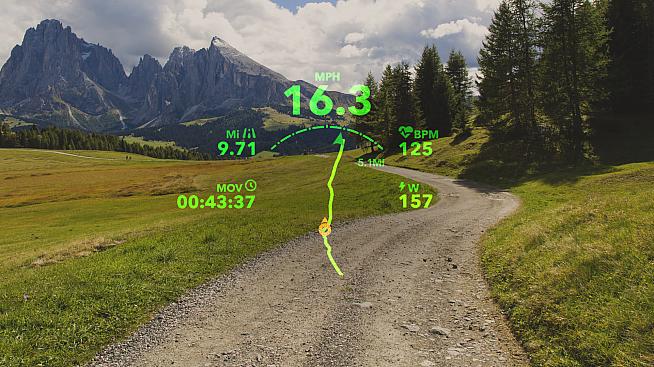 View ride metrics like speed and power and even navigate using the Raptor's in-vision display.

On a much longer test ride, I had no problem with the weight or bulk of the glasses and I'd begun to be at ease with the on-screen data. An interesting side effect of the default imperial measurement on the Raptors was that I wasn't continually doing mental maths to convert metric speed and distance into old money.

After fours hours of riding, it felt the most natural thing in the world to be seeing my heart rate, cadence, mph and distance covered everywhere I glanced. I did find it a tad frustrating that I hadn't yet mastered the art of taking videos on demand, especially at speed. As a consequence, all of the footage I have is when I'd slowed to a crawl on the inclines and the excellent on-board microphone picked up an achingly accurate audio confession of a wheezy old fat bloke, soundingly suspicously like a dubious phone call.

The upshot of this was that I felt less inclined to fiddle with the gesture control while riding, and would probably shun this in favour of the voice activation function. Everysight do also sell a separate controller for the Raptors. Priced £59, it can be mounted anywhere on your handlebars and relays basic commands - like record video, for example - to the headset by Bluetooth.

To test the accuracy of the onboard GPS tracking I compared the Raptor's data with that collected by an ELEMNT Bolt computer mounted on the stem, and found them to be pleasingly similar. 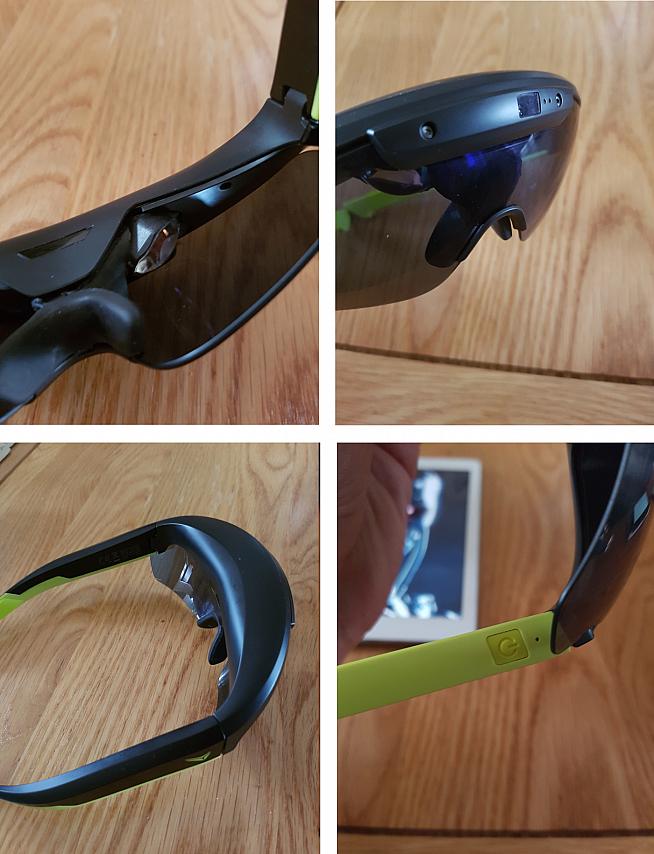 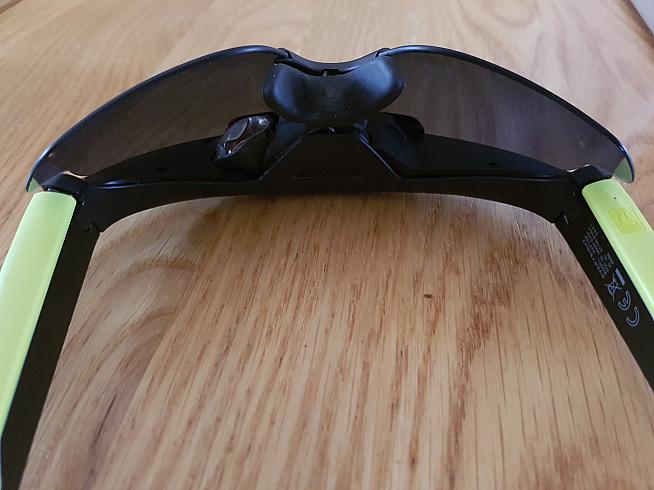 With up to 32GB storage the Raptors can be used alone or sync with phone + other sensors.

The further I got into my ride, the less I noticed the data before my eyes, perhaps a result of my slight short-sightedness. In fact, as I approached the end of my journey, I forgot about them totally and was back to checking my stem-mounted display. It wasn't until I got home and noticed the prompt to pause my ride, that I remembered I had an action to perform.

If you're planning on using the Raptors on all-day rides or long sportives, it's worth noting that the battery life is a claimed 8 hours. I didn't get close to a ride of this duration during the test period so can't verify it, but if accurate it means the Raptors will last for all but the longest days in the saddle.

When it does come time to recharge, this is done via a Micro-USB port on the end of the left arm.

The Raptors are an impressive bit of kit, with a hefty featureset accompanied by an equally hefty price tag. As an all-encompassing tech solution, they are excellent - even if the assumption that a rider will need all of these features in one package is a lofty one.

Their slogan 'Ride Naked' rings true if you desire to be free of the squawking box under your nose, but of course you're not naked - you're wearing cutting-edge tech that pack all the features of a regular cycle computer, and more, into a pair of specs.

Many riders have no need for a phone, music or a camera - either they do without them, or may already have a simpler option available. It's a narrow (and wealthy) target market that desires everything in one package. Personally speaking, if a future incarnation of the Raptors were to offer a pared down set of features at a more economical pricepoint (and lighter weight), "I'll be back" for another look.

But in the meantime, if you want it all and want it now, the Raptors are a high-tech marvel that will delight data-obsessed cyclists, lovers of shiny gadgetry and fans of 1980s dystopian classics alike.