Taking place on 10 October, the Cambridgeshire Rumble is somewhat out of place this year. It is normally organised as a season starter to get the legs spinning after whatever sort of winter training you may have, or have not committed yourself to.

At this time of year, it's probably better seen as a season finisher - at least, it will be for me - and a prelude to getting the winter bike and turbo trainer ready.

In previous years, the event was known as the Richardson Rumble down to the fact that the main sponsor was the local bike shop, Richardsons Cycles. This rather cleverly meant that some of the feed stations were sited at Richardsons bike shops and, therefore, mechanical support was already in place as well as a good bit of PR.

Although the name has changed, Richardsons still offer full mechanical support along the route and even offered free bike checks in the weeks leading up to the event. 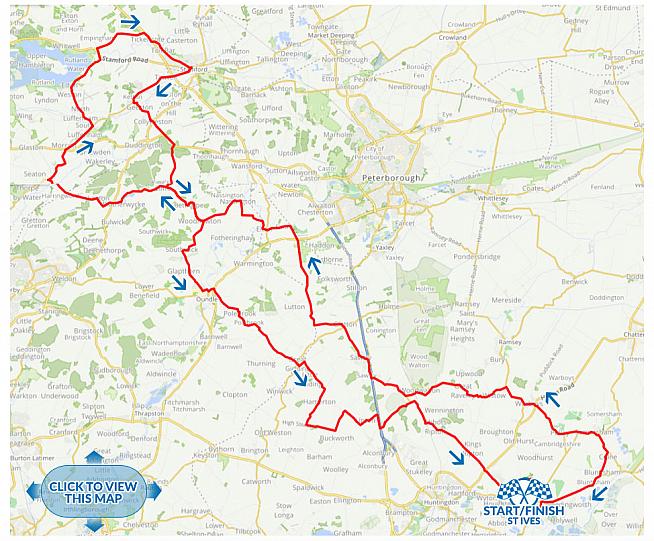 The long route on the Cambridgeshire Rumble.

The title sponsors may have changed but the Rumble is still run by the same company, Wheels in Wheels Events.

Although Wheels in Wheels is a local company, they do not restrict their activities to just local sportives. Another of their popular activities is training camps in Mojacar, Spain and this year they are introducing a new Gravel Bike camp. Having never attended one of their camps (nor any other for that matter) I could not comment, but a look at their website will give you a full lowdown on what is available.

As promised, two days before the event, the organisers emailed all participants with up-to-date details of the registration process, start and finish times and the now ever-present covid requirements. To help relieve any congestion at registration on the day it was possible to register at Richardsons cycle shop in the town centre the day before, where you could pick up your ride number and start card, the alternative being picking them up on the day.

The biggest concern leading up to the event was probably the weather: will it be cold, will it be raining? The weather in the preceding week was somewhat wet, windy and gloomy so not really inspiring, but the weekend cheered up and the forecast for the day was overcast to begin with becoming sunnier throughout the day and only a 5% chance of rain. Game on.

The morning was certainly overcast and as the early arrivers were getting their bikes sorted we got the whole 5% of rain, which stayed with us for the first hour or so.

The start and finish point was at the St Ivo sports centre which meant plenty of parking spaces, and although registration was at the far end of the car park the sports centre café and toilets were made available to all riders.

Once riders were in the start gate and getting a course briefing, a member of the organising team came round and collected our start cards. These would be annotated with our start and finish times and indicate how many riders were out on the road.

My cycling buddy, Paul, and I had booked in for the long route so were on the start line for the 0800 departure. The briefing covered all of the sticking to the Highway Code reminders, details of some of the road conditions and potential roadworks and the unfortunate news that the second feed station in Stamford had to be closed due to a member of staff testing positive for covid.

Fortunately, the organisers got all the goodies out and moved them all to what would now be the first and second feed stations at 37 and 74 miles, which goes to prove the point that you should make sure you have plenty of nutrition with you from the start. 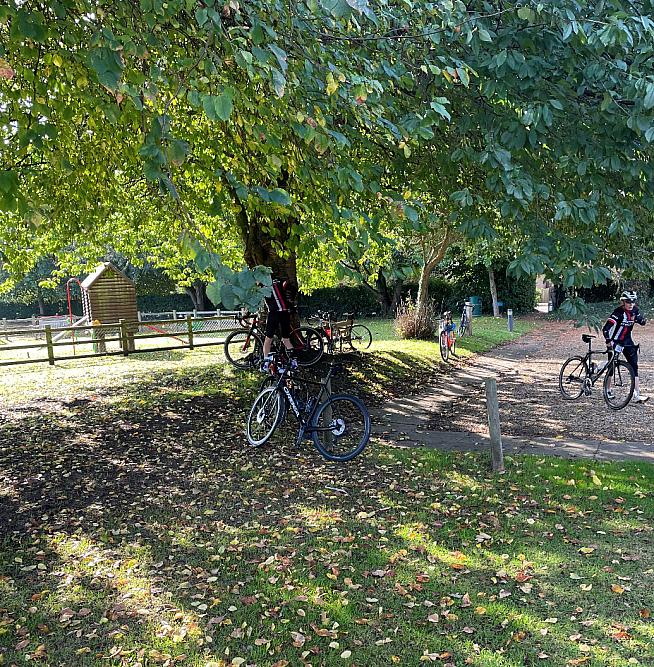 So off, we went, into the cool morning with the rain still coming down. It wasn't too heavy, and it was a clear case of the Velominati rule 5 being adopted and getting on with it. Other than the fact that extra care was needed on some of the bends due to the road being a bit greasy, there were no real rain-related issues.

The first and last quarter of the route was familiar to me as the roads are ones I use regularly at weekends for my normal rides, and I was surprised how much of a difference it made knowing where I was and what to expect. This familiarity turned out to be more of a psychological benefit towards the end.

Around about the 25 mile point the route took a right turn at a T-junction, and it was amazingly obvious that we turned onto completely dry roads, not a spot of rain. Glancing back, it appeared that the rain had stopped at the junction.

Once again, a determined-looking train overtook Paul and me and we managed to hook onto the back of them to help us get through to the first stop of the day. I should add at this point that we had been leading our own little bunch of riders, so we weren't just hanging around to take advantage of other teams.

The day began to warm up at this point and by the time we'd reached the first feed station, at Wood Newton, it was very much a case of getting the arm warmers and gilet folded up and in the back pocket before we carried on.

The feed station was in a village hall with tree-sheltered bike parking. Because of the covid concerns all the goodies were pre-packed bars, biscuits and cakes. There was quite a good variety including some 'Aussie Bites' which I'd never seen before, and they are very nice.

Suitably topped up, we jumped onto the bikes and set of for the next leg. As soon as we saw the 'Rutland' sign we knew we were in for a bit of climbing to test our flatlander legs, and we didn't have to wait too long before we were put to the test. The first climb wasn't too bad but it was a taste of what to come, and it seemed as though some sort of planning had taken place to increase the climbs as we got further into the ride.

After a while, Paul had started counting down the amount of climbing we'd done and how much was left but, whether we liked it or not, it had to be done.

As we came out of one village the steep climb that confronted us looked even steeper when, over in the distance, we could see, just about, a fellow cyclist working his way up the climb. It was time to settle into a suitable pace and go for it.

Despite appearing to moan about the climbs, I have to say that I enjoyed the extra challenge that they added to the route, even though they were very testing, and once up at the higher levels the views made it all the more worthwhile.

By this point the day, and us, were beginning to warm up and it was one of those days when it was great to be out on the bike.

As we approached Stamford, where the second feed station was scheduled to be, we were ready for a stop so we just pulled over for a bite and a drink with a bit of a leg rest.

Once in the historic town we were a little snarled up by the inevitable traffic jams, but the route took us away from the main road and saw us through without too much trouble.

It didn't seem to long before we'd completed the upper loop of the course and were now backtracking down to the second feed station at Wood Newton. We still had climbs to negotiate, but the wind now was slightly more in our favour. 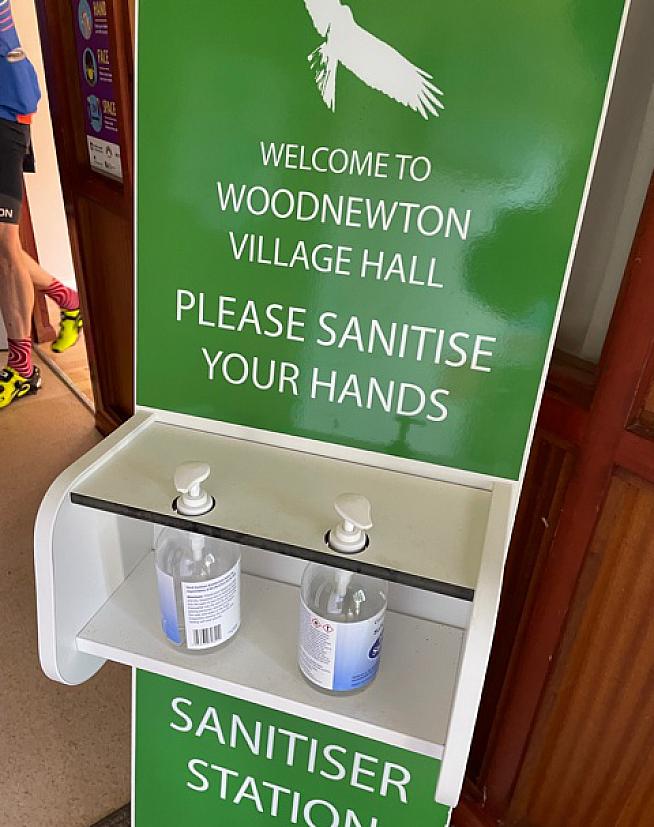 A reminder of the times at 2nd feed stop.

The same volunteers that were there on our first stop were still manning Wood Newton and there were still plenty of goodies. Although we might think we're having a long day on the bike, it must have been worse for these guys. They must have been bored because they'd 'borrowed' a couple of the rubber gloves that were available and, after blowing them up, drew faces on them and used them for volleyball practice. Good game, good game.

Seriously though, and I say this every time, it's the volunteers that make the rides that bit easier for us by sorting stuff out and making sure we've got plenty of what we want available.

From this point it was all downhill, or that's what we told ourselves, but the organisers had still got a couple of climbs sorted for us. The good news though was that we were back on familiar roads and although it didn't lessen the workload it did help knowing what was left for us to do.

Once we got to the 20 miles to go point I treated myself to a Kendal Mint Cake (KMC) chocolate bar. It's become the 'go too' thing for me, acting as a bit of a treat to see me through to the end of the ride. The bars and/or the KMC gels go down really well and refresh all the senses at this stage of a ride. 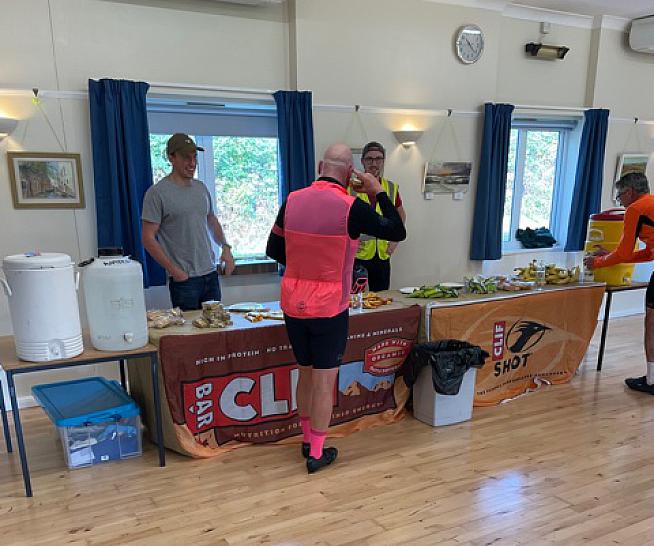 As we got to the outskirts of St Ives we knew that the road really was downhill to the finish. All we had to do now was just coast in to the finish line and pick up the hard-earned medal while one of the Wheels in Wheels team located our start card to record our times, although Strava had already sorted that anyway.

What a day. Not ideal weather to start with, but glorious once the sun got out. A testing route but glorious scenery and wonderful country villages to ride through, which made it so worthwhile and enhanced the joy of being out on your bike.

Furthermore, from a personal point of view, it was a bit of a trip down memory lane as we went through and passed many landmarks that were part of my early RAF career. 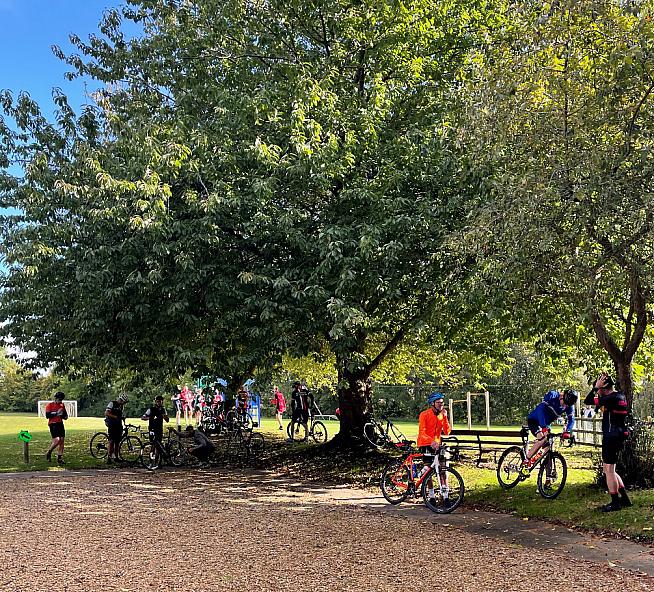 So that brings this season to a close and, as previously mentioned, it'll be the winter bike and turbo for me with a view to some sort of preparation of what the sportive calendar may have in store for us all next year. Let's hope it's a good one.

Happy winter pedalling to all, and let's all look forward to a great year in 2022.

Discover more about Wheels in Wheels sportives and training camps at wheelsinwheels.com.