There's an urban myth that you can fit the entire population of the Earth on the Isle of Wight.

Even allowing for the lack of social distancing, this is quite an ask. Sadly it was debunked in 2013 when the world's population was merely 7 billion, and I'm pretty sure it's gone up by then. You'd need an island the size of South Georgia to accommodate everyone, apparently. That's not even considering the 2-3 day journey there from Argentina or Port Stanley, and the complex visiting regulations; and the risk of penguin bites.

The Isle of Wight isn't really that big, but it is quite diverse in its geography. Think less of a tropical island with a solitary palm tree and more like a mini representation of the south of England. 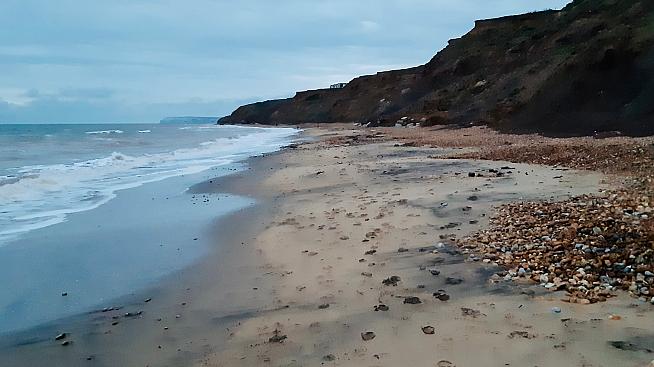 The Isle of Wight: England's very own semi-tropical island...

Author Julian Barnes took that concept a stage further back in 1996 when he wrote the book 'England, England' - a semi-farce in which the island was turned into a giant theme park, divided up into a representation of each county, recreated proportionally within its boundaries.

I'm not saying they built a Ben Nevis, a Lake District or a Severn Valley on the isle but the book was written as a satire on the character of Englishness, rather than an exploration of its geological diversity. My A-level geography teacher never ceased delighting in telling us spotty swots how incredibly exciting geology was in the UK, but we were just discovering booze and The Clash, so a lot got missed in translation.

The Isle of Wight has quite a few features you would find elsewhere in the country, but since no volcanic activity nor glaciation has been recorded there, it cannot compare with the Cairngorms, North York Moors, or Wales. It's more a small-scale version of the South of England, taking parts of the South Downs and the New Forest, but throwing in some West Country features and Kentish lanes.

There aren't really any trunk roads or dual carriageways outside the main towns and it is crisscrossed with tiny winding roads and bridleways, so the best way to explore is by bike - and the best way to experience the whole island is by riding the Isle of Wight Randonnée.

The IOW Randonnée has been running each May for 30 years, and is hugely popular; but the route is permanently signposted both clockwise and anti-clockwise, making it easy to ride at any time of year.

You can start anywhere and, as long as you follow the correct inversion of blue and white, you'll come back on yourself sixty-odd miles later. 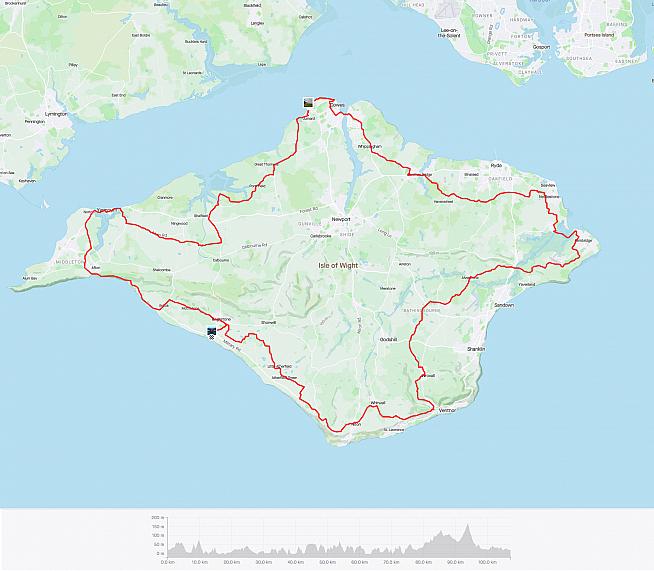 The 60 mile loop around the Isle of Wight is signposted for cyclists in both directions - and makes a great day trip.

I have visited the island several times when my children were small and I had little interest in cycling, but of late the challenge has been one I've wanted to tick off my bucket list. I had been told that first-timers should do the route anti-clockwise so this is what I planned along with Mrs Lul during a week-long stay in the southwest, near Brightsea. 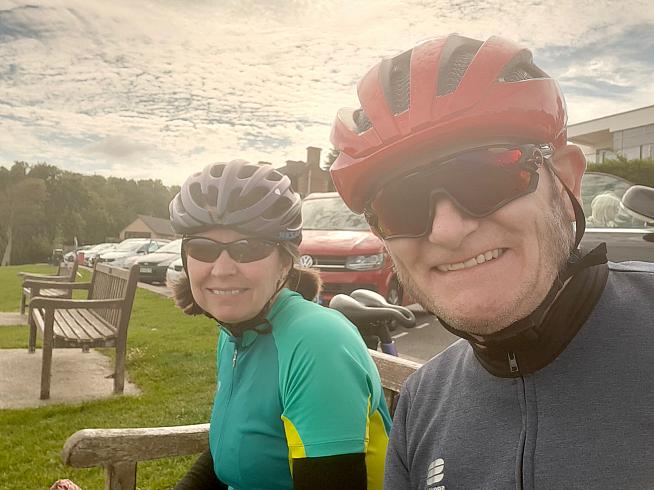 Andy and Helen in the windiest place on earth.

The day before we were due to ride the island, I had to get up at 5 am and lash our awning vigorously to the camper van to stop it ending up in Northern Belgium. Thankfully, the day of the ride dawned crisp, bright, and clear.

Our campsite was located on a section of the Military Road which runs from Blackgang to the Needles, more or less. Our ride started by venturing slightly inland to Brightsea village for a quick warm-up before the route dumped us back in the wilderness on the most westerly section of the Road.

The undulating ribbon of tarmac, very reminiscent of the Seven Sisters, was laid out before us in all its lumpy glory; but before going all the way to the Needles, we turned inland towards Freshwater for what's considered the flattest part of the route. This cuts off the western tip of the island and skirts the port of Yarmouth (as good a point as any to start your own randonnée). It was a nice respite from the first hours' climb, although even this part of the day wasn't without its bumps and berms.

The further east and north we went, the more the undulations increased, until we reached the pretty town of Gurnard and encountered our first seriously steep harbour front climb. After a brief lunch stop, it was on to East Cowes and more short, sharp ramps to get to the chain bridge across the harbour.

Due to the Covid restrictions the bridge wasn't operational, but we could hop on the passenger ferry with our bikes for what basically constitutes a paddle across to the Red Funnel ferry terminal. 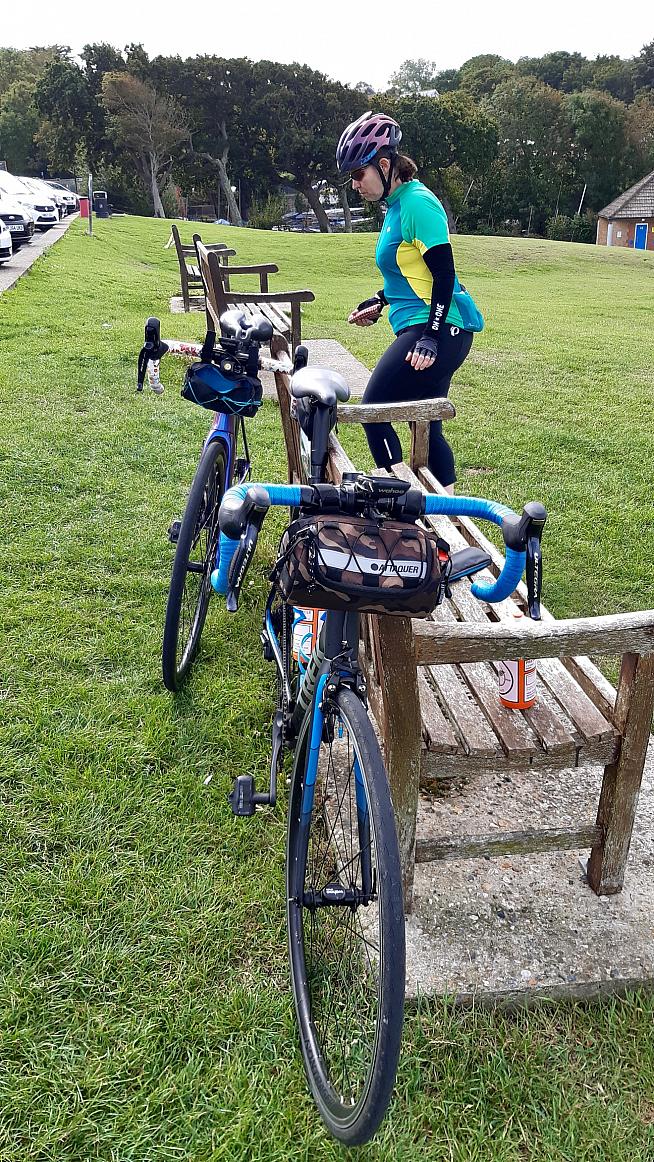 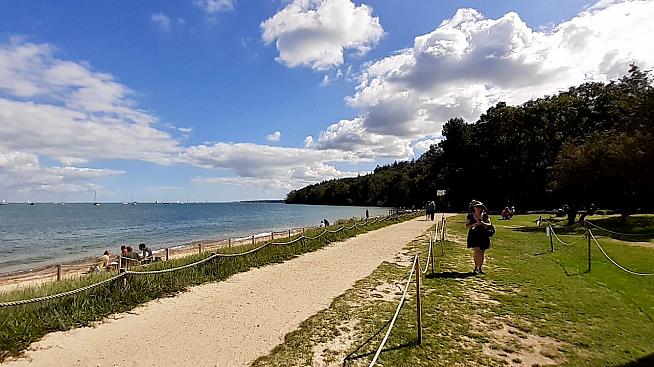 East of Cowes, climbing up and past Osbourne House, the roads seem to get busier, dare I say, more touristy as it connects Cowes with the other popular ferry port on the island at Fishbourne.

As an overture to the final act, skirting the airport around Bembridge was the last of the truly flat roads and we began to alternate between steady up and steady down, especially around Wroxall. Here the route briefly crosses the Red Squirrel Trail before joining one of the island's many 'quiet roads' with a recommended speed limit of 15mph and locals safely, if a little blithely, walking down the middle of it, getting in the way of puffing middle-aged cyclists.

This Quiet Road spat us out at Ventnor and on to the last slog of the day, the million-mile long road up to Blackgang. My wife may've dubbed this The Widowmaker because of the number of times she fantasised about killing me while churning the granny gear up what felt like the longest two miles ever.

I was blissfully unaware of my near-death experience as I stopped at the top for a brief chug on my water bottle, although I was rather surprised at the time at the bitey tone of the request for an energy gel chew from my handlebar bag. On reflection 'Energy Chew' could sound a little like 'I Kill You' but it was a bit breezy, so I'm giving her the benefit of the doubt.

The last 5 miles of the ride took us, after a rewarding downhill blast from the 'Chine, slightly inland again to save us from the soul-destroying monotony of the Military Road - we could plainly see the Needles, but like a chilly, windswept mirage it never got closer as long as we could see the sea on our left.

My nearest and dearest became more of her old self as the red mists disappeared and by the time we got back the campsite she only wanted to murder me a little bit.

Joking aside, the Isle of Wight circuit is a very doable but challenging route that would suit a range of cycling abilities - there's even a 35 mile mini version of the route. On our circumnavigation, we passed or were passed by all sorts of cyclists, all doing their own version of the ride, both with and against us.

I'd like to return and do the route in the opposite direction sometime soon, maybe getting the train down to Portsmouth and making a day out of it. I'd also like to revisit some of the roads more inland that seem more challenging and to come back with my gravel bike to explore the myriad bridleways that seem to branch off from every minor road. 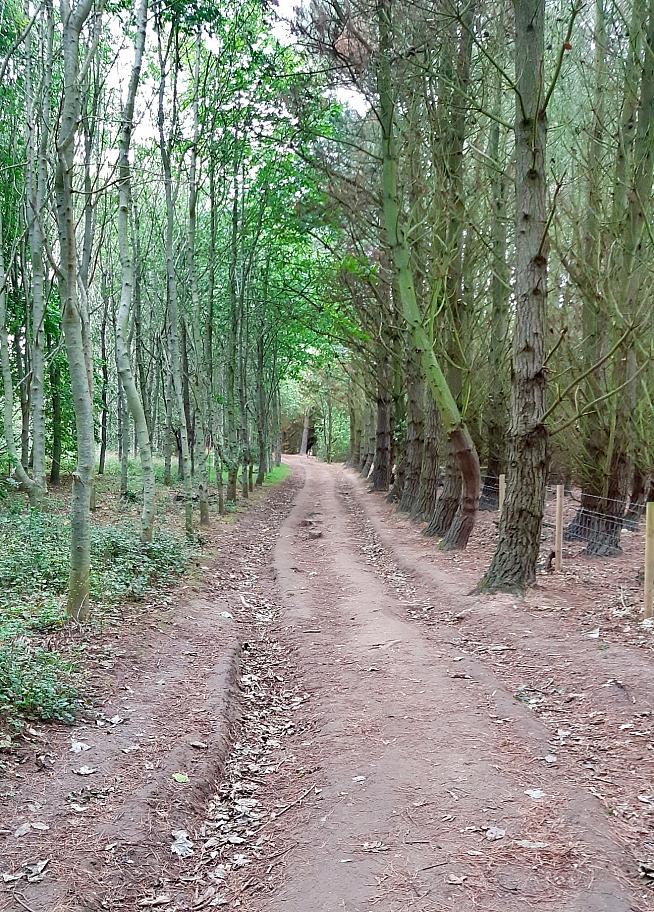 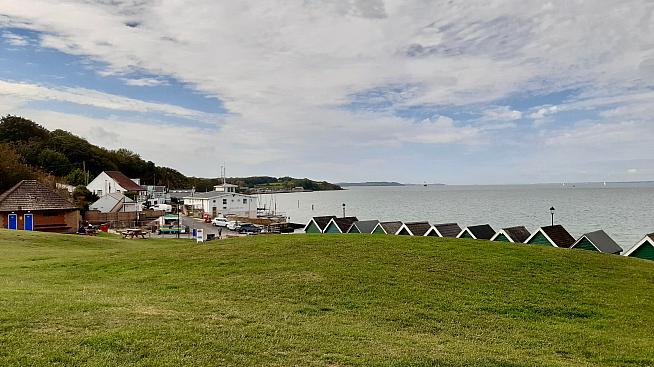 Don't let the ferry journey put you off - the Isle of Wight is a great place to cycle, especially if variety is your thing. We didn't know what was around the next corner, although it invariably seemed to go up in gradient each time.

You shouldn't need a particularly wide ratio of gears, either. A compact road chainset or even a wide range one-by setup is plenty good enough to get you through the day. Make sure you have some provisions with you, though - some of the route is quite secluded and off the beaten path, especially in the off-season.

The route avoids most of the parts of the island that caters to the summer visitor, which makes it all the more enjoyable if you are prepared for it.

Just don't all rush at once - even if the entire population of the world could fit on the Isle of Wight, it would rather spoil the tranquil atmosphere that makes cycling here such a joy.