The reverberating chime of crystals, combined with the vibration of phone against wood, roused me from my deep slumber. My four-o-clock alarm signalled a rather intrusive start to the day, particularly as the darkness and sub-zero temperatures outside recommended staying in bed as a serious option. But I had a treat in store. In three short hours, I'd be lined up on Hove Promenade with 1300 other riders eagerly anticipating the start of the inaugural Brighton Marathon Bike Ride.

Not quite a cycling marathon, but on the same course as the actual marathon, the fast and flat, 50km, traffic-free route takes in all the major landmarks of Brighton and Hove. A kind of warming up of the tarmac, prior to the runners pounding the same roads during the tenth running of the city's annual marathon road race. 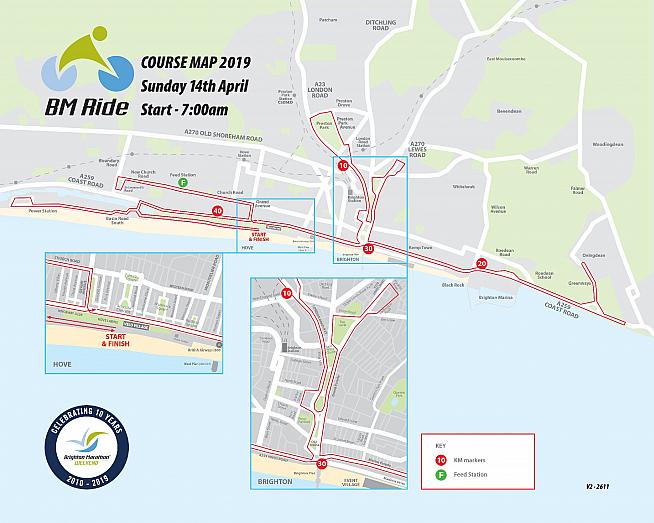 The course of the 2019 BM Ride closely follows the marathon course.

Brighton will always have a place in my heart. I was born here in the sixties, lived here in the late-eighties and met the love of my life here in the mid-nineties. Talking of love, my recent passion for cycling has delivered me to start line of this maiden event just a mile from my place of birth.

Unlike the marathon (which starts in Preston Park in the north of the city) our event starts, and finishes, on the promenade between Hove Lawns and the beach. The ride organisation has placed riders into three pens, according to predicted finishing times. I'm in the first. In fact I arrived so early I was able to place myself near the front, maybe a bit over ambitious but I didn't want to get involved in any early congestion.

There was only one subject during the pre-race chat... the weather. Its mid-April and the temperature on my Garmin displays a rather wintry minus-one. Everyone around me is dressed for a winter ride... winter jackets, tights, hats and gloves; it's more like an arctic expedition than a closed road sportive.

I hear a voice. "Hey, Chalky!" is the cry. This is a nickname I've barely heard since my schooldays, with only a handful of close friends using it nowadays. I look around, but with everyone in their full winter regalia, it takes a while to scan faces. I spot Malcolm, one of my Sussex Nomad riding cronies; he's here with his buddy Justin.

After a brief chat, my attentions turn to the fast approaching seven o'clock kick off. Immediately in front of me is a group, some ten-strong, of riders from Blazing Saddles from nearby Rustington. Resplendent in yellow and black, they look like they mean business. In the other direction I observe row upon row of helmets, as I gaze at the massed ranks of the congregation behind.

As the last few seconds tick away, I'm expecting a roll out, a gentle start to proceedings. The gun goes off, I look down to start my Garmin and click record on my camera. By the time I look back up the Blazing Saddles have gone, blazing a trail out west. I spend the first mile going flat out to get on the back of their train, but my efforts are unrewarded as I see them disappearing into the distance. I curse my lack of judgment as I now contemplate riding the remaining thirty miles solo. 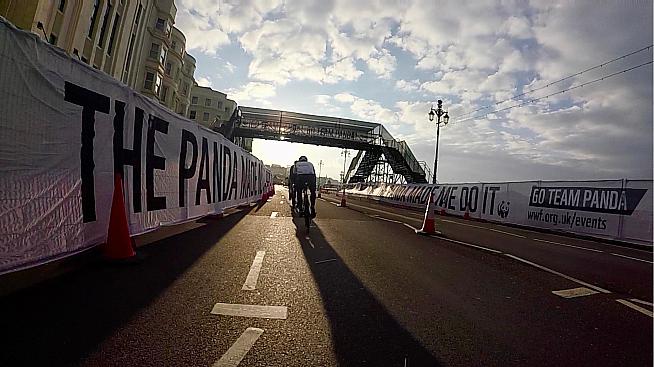 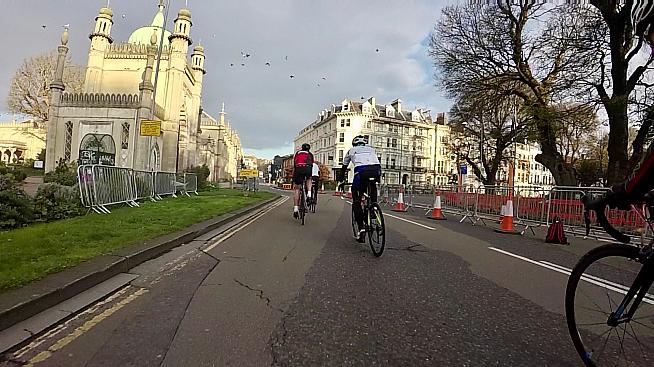 My solitude continued as I turned onto the coast road and headed back east towards Brighton. There's barely any wind, but I still need to punch a hole through the cold air and the sunrise isn't helping matters, as I'm forced to raise my arm to shield my eyes from its blinding glare. My fortunes change however, as I'm clawed back by a small group containing Malcolm and Justin. I drop to the back, take a breather and hide from the Sun's dazzling rays.

Suitably refreshed, I feel ready to take on the city centre section as we see the Palace Pier for the first time today, prior to sweeping left onto the Old Steine. We pass the Royal Pavilion, a majestic structure built over two-hundred years ago as a seaside retreat for the Prince Regent, but we have little time to admire its magnificence as we continue to devour the tarmac.

The architectural blur continues as we fly past the Mock Tudor King and Queen public house and the 19th century St. Peter's Church before hurtling north towards Preston Park. The sixty-three acre park is famous for housing the oldest working velodrome in the world, but this is not on our route as we circumnavigate the park with the cycle-track to our right. 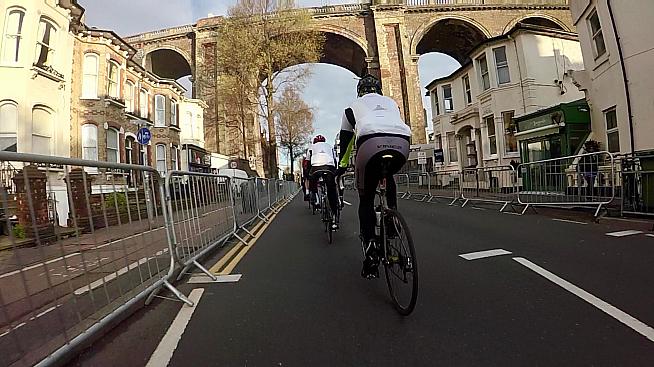 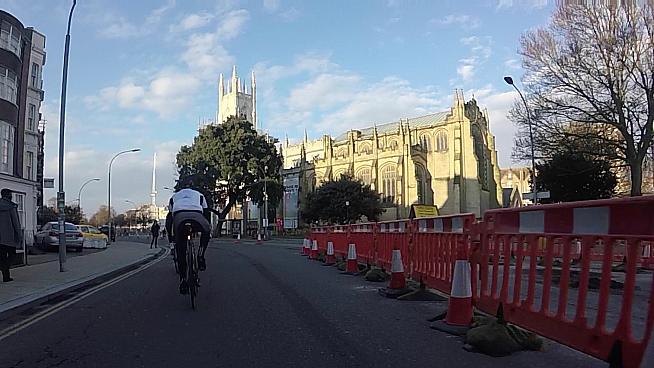 This course is deficient in the gradient department, but the short stretch up Preston Drove briefly contradicts this fact as we pass the park before the route directs us back to the seafront via the city centre. The pier waits to greet us once again, this time directing us east onto the long out-and-back loop to the village of Ovingdean on the outskirts of the city.

The tight twists and turns of Brighton and Hove are behind us now as we follow the straight-as-a-die coastal road. On the other side of the carriageway, the lead group are on their way back. My obsession with numbers kicks in and, even though they're travelling at a rate of knots, I count nine, maybe ten of them. A further group of two and a couple of single riders also whizz past; it suddenly dawns on me that everyone in my group is currently in the top-twenty.

I'm ecstatic about the prospect of finishing that high, but as the half-way point arrives, a big group forming behind us catches my eye. The pressure is on as there's a lot of racing to be done to protect our lofty position. I push to the front of my group and drive them on, but the group splinters and only Justin comes with me. We're left to share the workload as we turn west once again and follow the same route back towards Brighton.

The Palace Pier comes into view for the third time today. With all the tight turns earlier on the route, I'm half expecting us to be directed left onto the pier, up to the end, through the arcade and back down the other side. As I let my imagination run wild, Justin and I get swamped by the bigger group chasing us. We slot in behind the lead riders, but as I glance behind I notice that the group has diminished to six, we're still on for that top-twenty finish.

We seem like we're near the finish now, but my Garmin say ten miles to go. My confusion is cleared up as the Queen Victoria statue beckons us off the coast road and into Hove for a long out-and-back stretch along New Church Road. We reach Boundary Road and its left-left-left before we turn right and travel back along the other side of New Church Road until Queen Victoria directs us back onto the seafront.

We're still a compact group as we exit the city briefly for the out-and-back stretch along Basin Road South in Shoreham Port. There are in the region of ten unfriendly speed-bumps on the way out, and the same number coming back. The hostility of this three-mile stretch disrupts our flow and, in the chaos, we are caught and passed by a group of four stronger riders. 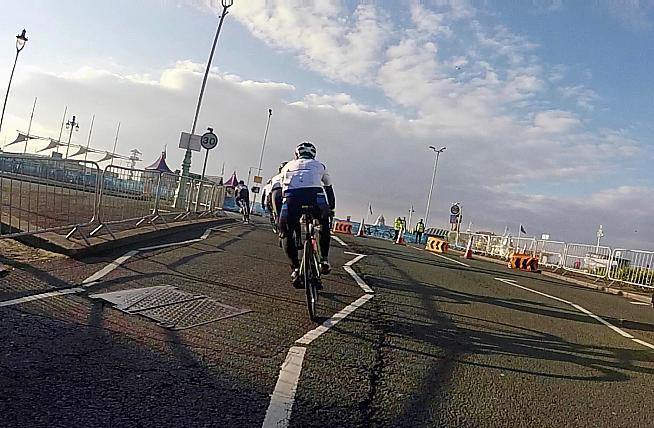 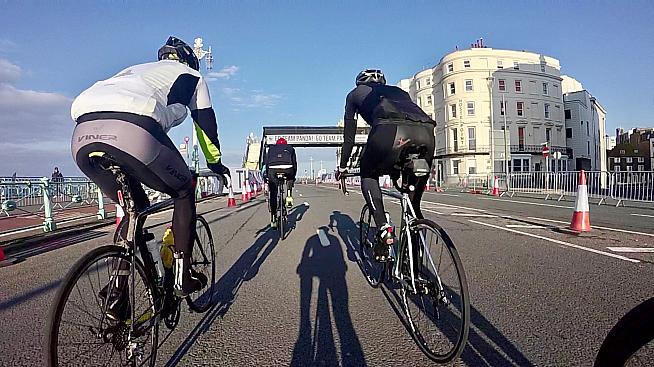 The Nightmare on Basin Road only lasts for nine minutes and the remnants of my group reunite for the final two-miles. With some tight turns to negotiate, I move nearer the front but as I do, the route sends us back onto the prom earlier than I expected. I think it's the finishing straight so I make a dash for the line only to be guided back onto the coast road...

"Nooo... I've gone too early!" I exclaim to myself. I've created a gap, but is it enough? Should I push on and hope I can sustain this quad-burning pace or should I let my cohorts catch me and save some energy for the real finale?

My decision is to free-wheel for a few seconds and let a couple of riders through to guide me around the last two corners, a ninety-degree right-hander followed by an equally steep left-hander. The action is starting to warm up now, which is more than you can say for the temperature, which has only just crept into positive figures. I don't want to go too early this time, so I wait... and wait... and wait. The finish line is fast approaching, but no-one wants to make the first move.

Suddenly a rider to my left kicks for home; I immediately attach myself to his rear wheel and the race is on. I match him but, despite my best efforts, I just can't get around him. I settle for second, but, as I relax, Justin comes past and pips me on the line.

Twenty-first... I missed the top 20 by millimetres, but I don't care. I'm ecstatic. I've just had the privilege of experiencing the most exhilarating, adrenaline-fuelled 90 minutes of fun anyone could wish for.

I've also done my duty: the tarmac is now suitably warmed up for the marathon runners to hot-foot over the same course... 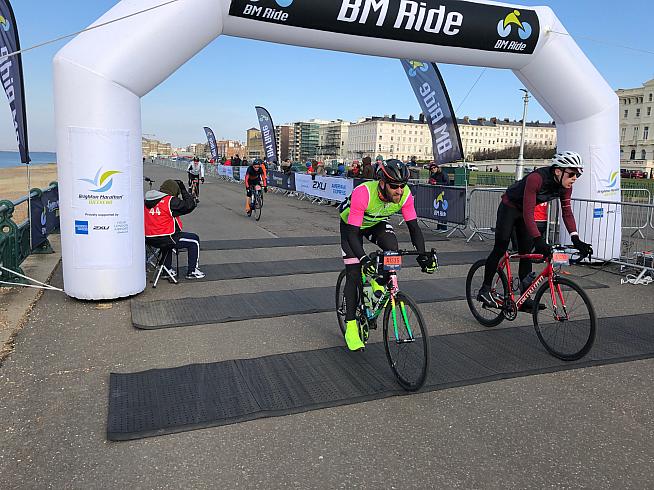 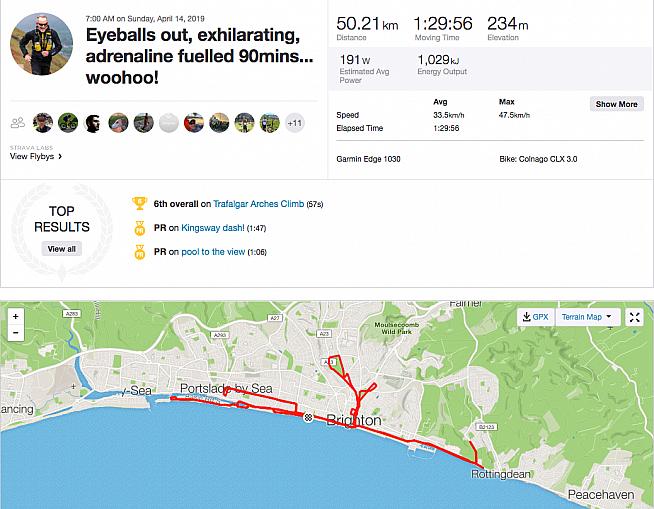 The second edition of the BM Ride will take place on 19 April 2020. For more information and to book your place, visit www.brightonmarathonweekend.co.uk.