The new route for the Black Rat sportive presented a dilemma. The longest of the three routes, the 166km Granfondo, was going over Gospel Pass, near Abergavenny, for the first time. The highest road passin Wales at 550m, this was a climb that I had heard a lot about but never attempted myself. I really wanted to give it a go, but...

Well, I'm exaggerating for dramatic effect: I had recently completed a pan-flat 15 mile ride by the River Avon. I used to cycle a daily ten mile round trip to work, but a change of roles and location mean I now have to drive. I used to ride sportives most weekends too, but a two-and-a-half year old in the household has curtailed those opportunities. Hit the turbo trainer I hear you say, but that's not my scene. One of the biggest attractions of cycling is being outside and travelling through the changing scenery.

So common sense told me to opt for the 100km Mediofondo route, but then there would be no Gospel Pass. I still had some fitness from running so maybe if I took it easy I could still get round the Grandfondo... Put me down for the long route. I could alway switch routes on the day I told myself.

Somehow I managed to exacerbate the situation by volunteering for the Maratona dles Dolomites on 1st July as well. What could possibly go wrong? 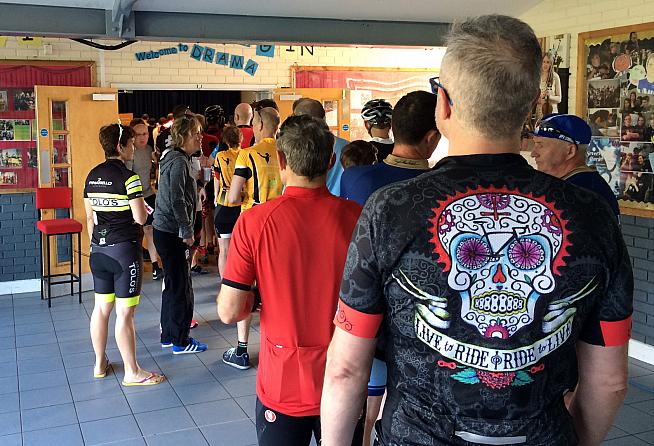 Riders queue for registration at the Black Rat.

The Black Rat is the closest sportive to my home in Bristol. For the last two or three years it has been based at Marlwood School near Thornbury, South Gloucestershire. This ensures it is now a short 10-20 minute ride to the Severn Bridge and access to the Wye Valley and South Wales for a fantastic day's cycling.

Registration opened at 7.30 am with Gran Fondo and Mediofondo riders due off at 8.45 am. Car parking was no problem in the school grounds, but based on previous years I was conscious toilets might be a potential issue. This time around the ladies had access to the permanent facilities in the school whilst the gentleman had four portable units in the car park. The permanent outhouse was not signposted so I nipped in there with barely any delay.

Things did not fare so well at sign on. It was divided up by the three routes (Piccolofondo was the shortest routes due off at 9.15 am). I arrived around 8.10am which appeared to be rush hour for Granfondo registration. There were about 270 entrants for this distance alone, and the queue was out the door and barely moving. After a couple of minutes I decided to go and get ready and come back. 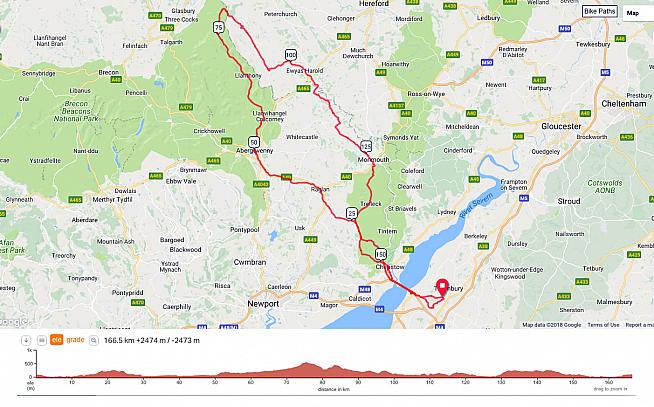 The new Granfondo route covers 166km with 2474m of climbing.

The forecast was for hot and sunny with temperatures into the low twenties so there was little to dwell on for kit choice. When I returned to registration around 8.30am the queue was down to five. I was still turned away at the desk and banished to the rear of the hall to find my rider number on the wall. Once obtained things started to run more smoothly. I wrote down my own mobile and home emergency contact and was handed a handlebar number and two cable ties in return.

I was ready in time for the off, which, as last year, turned out to be a mass start after a short briefing rather than sending riders off in groups at intervals. Initially the bike felt strange after so long away but I took it slowly just finding my way. We were soon across the Severn Bridge, into Chepstow and past the racecourse. However, this year the route didn't follow the river but peeled off the racecourse into the first serious climb of the day up to Devauden. Fairly long and around 6-7% in places, it was the most significant piece of terrain on the first leg.

The Piccolofondo route split off around Raglan whilst the rest of us carried on to Abergavenny. I felt good, riding within myself trying to conserve energy for later on in the ride, fuelling periodically with some energy gels.

The first feed station was in a car park in Abergavenny adjacent to the public toilets. Unfortunately, there was a queue for refreshments of similar proportion to that at registration. Food first but then the queue was delayed as riders refilled bottles. Two separate queues would have been better. When I got to the front there were bananas, sachets of honey and not much else apart from one sad looking piece of Swiss roll.

We were told that more was on its way but there wasn't time to hang around and wait. Maybe a staggered start would have mitigated this problem, spread the riders out a bit more and consequently spread the demand at the food station.

Back on the bike and the route split was almost immediate. The course was well signed with pink, yellow and green arrows on a black background depending on your chosen route. However, in the clutter of street signs and road furniture in Abergavenny I missed one and went the wrong way for about 500 metres. 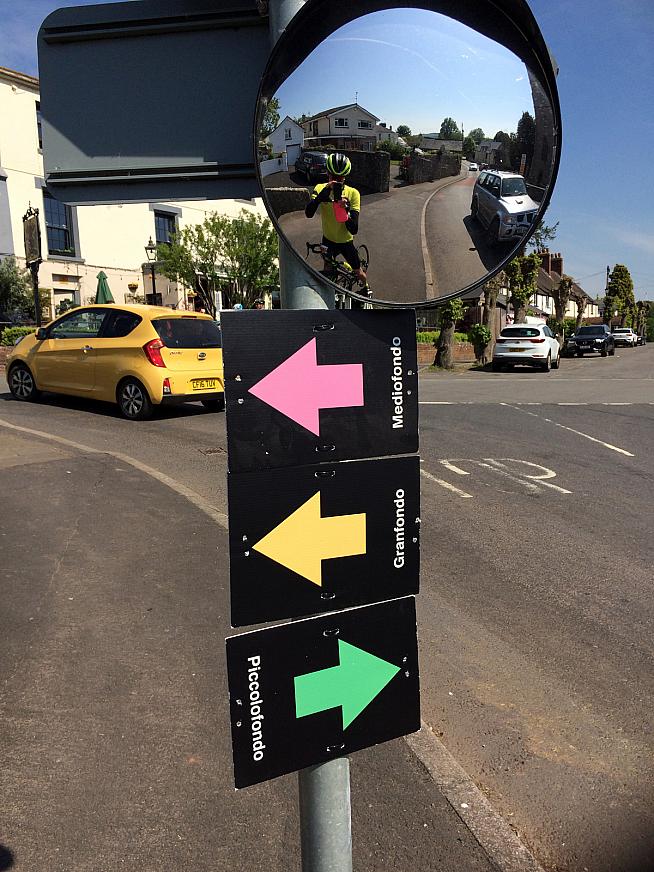 Split decision... the routes were well signposted throughout.

Back on track and the ascent up to Gospel Pass was underway. Whereas I had previously been surrounded by other riders I was now on my own, only passed by four others on the way up. Initially things didn't feel too onerous as the road rose a few metres then fell a couple as it just seemed to meander through the surrounding sheep farming hills. This went on for some time with the road gradually narrowing and climbing not quite imperceptibly but not sharply either. The weather had also brought out the Sunday drivers so there were several delays to let cars past me on the narrow road and also waiting for cars to pass each other.

The climb seemed to last forever, apparently it's nearly 25km of gradual ascent. It did get properly steep at the end, over a cattle grid and then a final push and a great view. 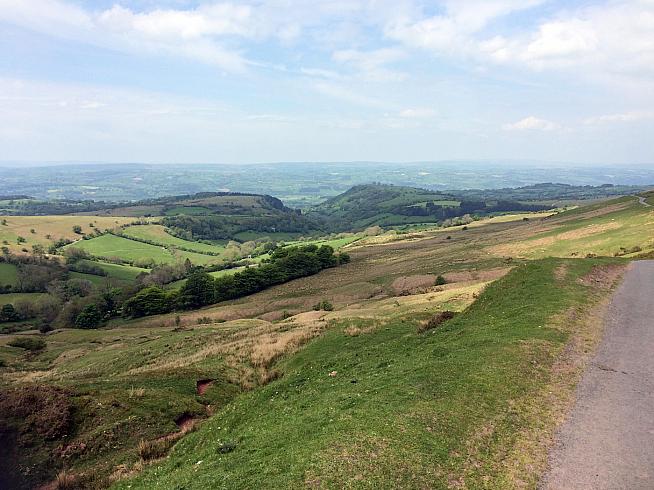 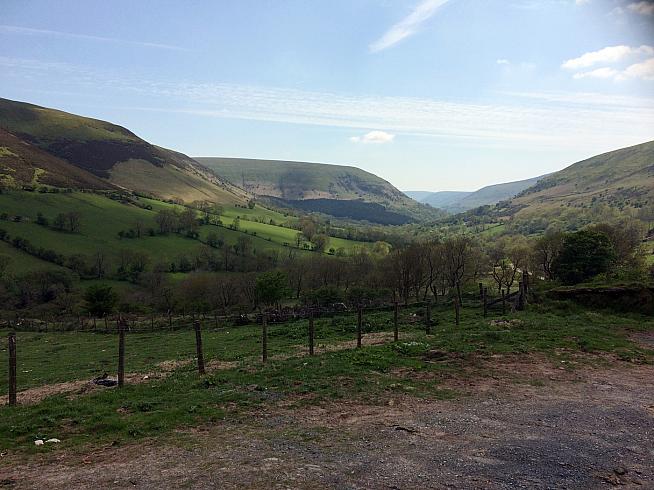 Gospel Pass is the highest road in the Brecon Beacons and rewards cyclists with some great views.

Energy reserves were depleted but I thought it was job done, freewheel down to the next feed station. There was a good downhill section but then what was this - another steep climb? I didn't recall that on the profile, or had I missed it just focusing on Gospel Pass...

I made the climb but it put me into the red and I limped into the next feed station at 96km. I took another psychological blow there as the three men were packing it up as I arrived. "You're lucky," one of them said "We were just about to go".

Now I'm not the fastest and I'm usually closer to the broom wagon than the vanguard on sportives, but a new thought formed in my mind.

"You might be, or there could be a couple behind you."

I was too tired to say anything, but thought if I hadn't arrived at that moment then I would have missed out on much-needed liquid top up and provisions when I required them most. Also what if there were others behind me in the same boat? As it was pickings were slim again, with a further apology that there were no salt-based snacks only bananas and a couple of other things.

I set off again, although now with a little trepidation despite some encouragement about the remaining route. I had been fuelling properly on my own supplies to this point, but as fatigue set in further my regimented plans went out the window just when I needed them most.

I made it down to Monmouth and then started the climb to Trellech. This was a case of experience not serving me well. I knew this ascent from other sportives where it had often been the main ascent rather than playing second fiddle. It was a sustained grind up to the next feed station. Time was getting on and I had nothing in the tank. I climbed off at the 82 mile mark. 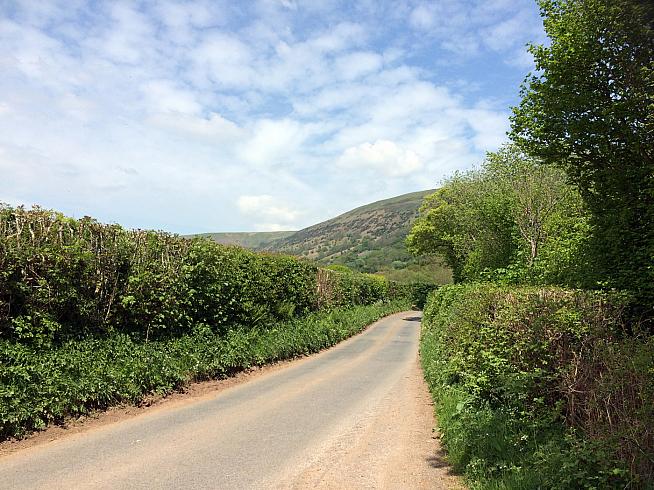 Empty roads and empty tank. Time for a call to the broom wagon.

During the rider briefing it had been explained that the printers had neglected to put the emergency number on the rear of the rider numbers, but that it could be accessed from the Facebook page. Due to muddled thinking from my tiredness it took me several minutes to find it on my phone, but I got through and was told to sit tight for a pick up.

To my surprise while I was waiting a lady cycled past me after about ten minutes, looking strong and happy to continue. So I hadn't been the last person on the road.

After about fifteen minutes the broom wagon turned up with two of the organisers on board along with another defeated cyclist and his bike. I had to lay my bike onto the soft food packaging in the rear. As I did so another rider on the route cycled past. He told the organisers that he had got seriously lost. They let him go on his way at that time, primarily because there was no more room in the wagon.

We drove up to the last feed station at the top of the climb as it too was closing down. They left enough food for the two continuing riders and then drove us back to base. At that point I realised I had a craving for salt and demolished two packets of salt and vinegar crisps on the journey. Back at HQ I bypassed the hog roast and cider and instead filled my commemorative mug with salted peanuts and polished them off as well. 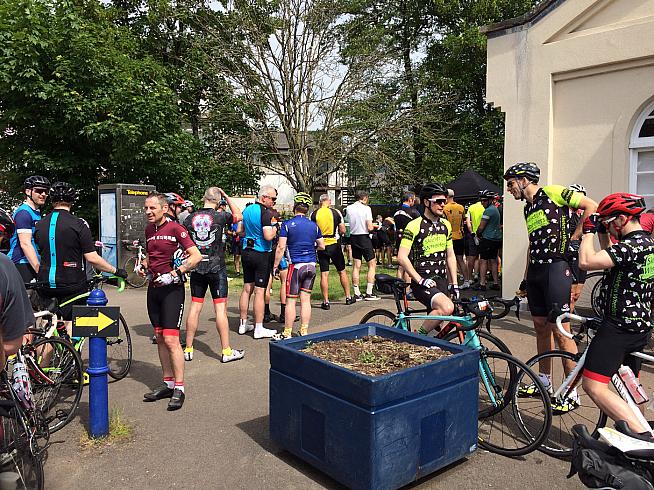 A hog roast and draught cider at the finish help make up for a lack of savoury snacks en route.

I checked in at the finish and was told that there had been several attempts to ring me and my home emergency contact without success. There must have been some confusion here as I had no missed calls on my phone and nothing when I later checked the home phone.

This seemed like the hardest Black Rat yet with nearly 2500 metres of climbing. I don't know if my perception was coloured by my being personally less fit compared to previous events.

It was as usual well run for the most part and the emergency procedures worked. However, there are some tweaks that could make it even better - smoother registration and better stocked feed stations, maybe staggered starts. I would also advocate either keeping feed stations open until all riders have passed through or using that as a cut-off point to ensure tailenders are picked up at that point.

All said though, the revamped route adds a fresh twist - and steeper challenge - to an ever popular sportive. Next year sees the 10th birthday of the Black Rat; no doubt the organisers will have a few surprises in store to mark the occasion. I look forward to coming back and finding out.

Find out more about the Black Rat and sign up for the 2019 edition at www.blackratcycle.co.uk.