Over the last few years I've travelled a lot of miles to do sportive rides. Driven across France north-west to south-east, flown to Inverness, driven to Yorkshire, the West Country, Wales, Devon and all points in between. Never really thought about Belgium, though.

It took me an offer from Sportive Breaks, purveyors of all trips cyclosportive, to consider a trip to Flanders to take part in the Gent-Wevelgem Cyclo: the annual sportive that follows the same course as the pro race, one day ahead of the main event. As is usual with the guys from Sportive Breaks, there were many packages available, both for this and many other equally noble events. On this occasion, the accommodation and entry for the event were sorted, leaving me and my youthful charge and driver, George, to negotiate the epic journey to the mystic Orient. 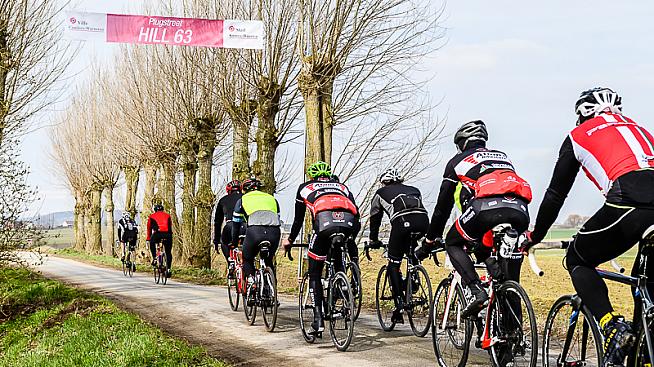 The Gent-Wevelgem course takes in numerous WWI landmarks including Hill 63 from the Battle of Messines. Credit: Etixx Classics Tour

Actually, the Lowlands of Northern Europe are achingly easy to access - just jump on the regular cross-channel ferry to either Calais or Dunkirk and you can be eating moules & frites in less time than it takes you to watch a game of kick ball in your local. Leaving Blighty before the sun was over the yardarm, we were booking into our plush and conveniently located hotel before sundown. While George popped off to Mons to see a couple of friends, I wandered into downtown Kortrijk to see if I could find a cash point for some lovely Euros and to sample the delights of Belgian beer.

Sadly (for me) I couldn't find one, and had to resort to supermarket shopping for the other. I always enjoy shopping on the continent as they always have a better selection of Tuc biscuits than the UK, and if that's not a reason for staying in the EU, I don't know what is. 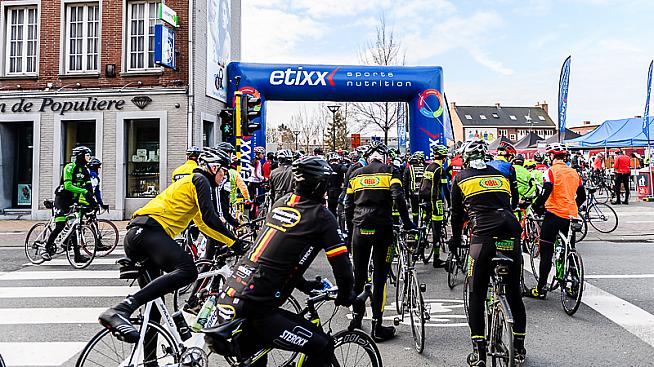 Kortrijk is a mere 5km from the start line of the Gent-Wevelgem, not that you'd know it from the rat's arse of an attempt we made in getting to the start line the next morning. Maybe it was the cans of beer, maybe the freaky breakfast room wallpaper or the excessive amounts of all-you-can-shove carbs on offer, but my body compass pointed to 'totally wrong' as soon as we left the hotel.

Thirty painfully inept minutes later, we rolled into the quick scan start village, to wave our mobiles at the jolly marshalls, pick up an RFID dossard and a ghastly tasting cherry gel - cherry in the way Rinstead Pastilles are 'fruit flavoured' - and unceremoniously rolled over the start line and into the mild breeze.

Gent-Wevelgem is not officially a closed-road sportive - although there were many strategically placed marshalls and members of the Belgian constabulary placed with flags at road crossings - but it doesn't need to be. All the car drivers we encountered were courteous and patient, with some even giving way on roundabouts and on the few occasions we ventured on to bigger roads. 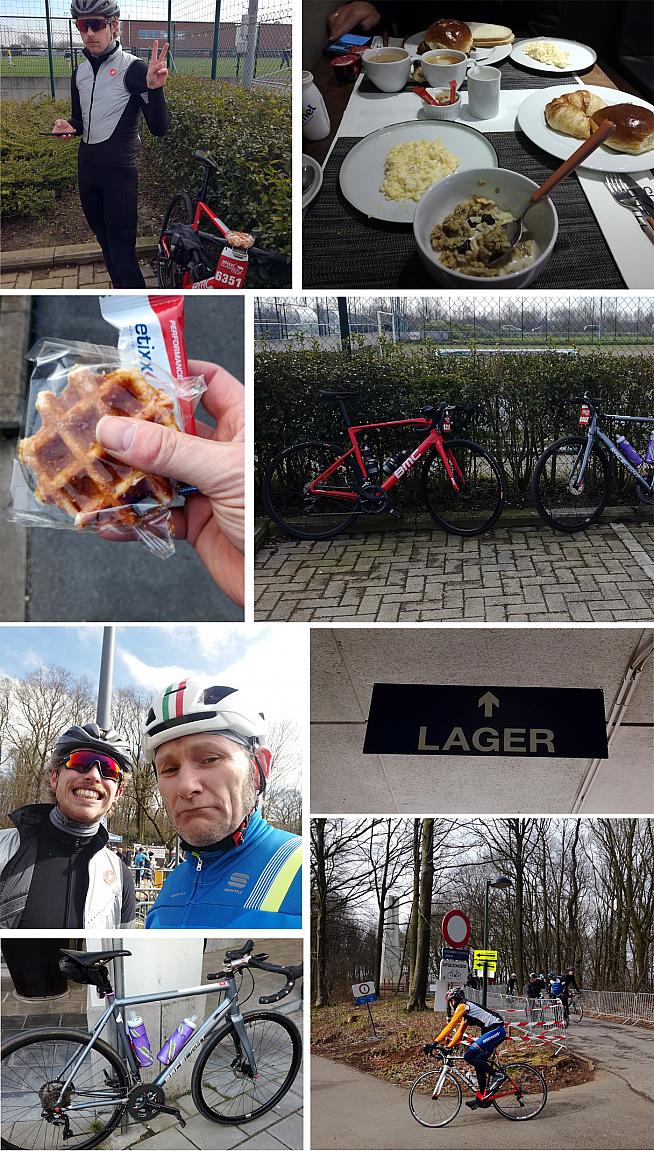 Coffee. Cobbles. And enough waffle to power a small cycling website... it can only be Belgium.

As for the landscape, the early course reminded me of the Romney Marshes, only smelling different. George, who grew up in rural Surrey, said it reminded him of his local farm community - and of a night sharing a hotel room with me after a feast of Tuc biscuits and tins of Belgian lager.

The speed we managed was far in excess of anything I'm used to, but this was aided by squadrons of other sportivistas, forming echelons against the gentle winds that we could join and share the effort with. All kinds of bikes were on show - hybrids, carbon race machines, MTBs and winter hacks, enjoying the weak spring sunlight and the favourable conditions.

The route took us north and east away from Wevelgem and criss-crossing the Flanders Fields that saw so much death and destruction a century ago. We skirted around the monument at Passchendaele and headed on towards Ypres to encounter our first taste of bone jangling, bladder jiggling and bike wrecking cobblestones, just after we passed through the Menin Gate. 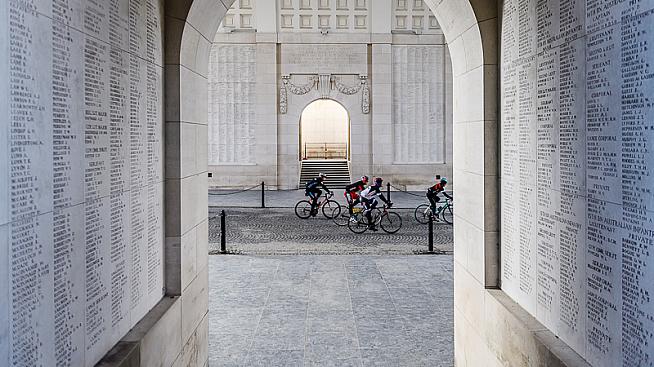 The sudden cacophony of groans, of wheels and genitals being brutalised and of frames having their compliance tested to the limit at speed was like being in a Stockhausen tribute concert by Test Dept. Luckily for George's chamois, we had our first feed stop shortly after, consisting of, amongst other things, the most Belgian of recovery foods, waffles and copious amounts of chocolate.

The high- (or low) light of the ride was fast approaching for us - the infamous cobbled climb of the Kemmelberg; and, being half my bloody age, George aced it and even managed a smile for the camera at the top. I did the walk of shame for the last 50 metres. The signs leading up to the timed ascent first hinted at a doable 17% closely followed by a laughable 23% - the misery, however, was short lived and was rewarded with a short and enjoyable/terrifying descent, followed by a couple of more sedate 'bergs and a gravel section encompassing Hill 63 and Plug Street, both significant historical WWI landmarks. 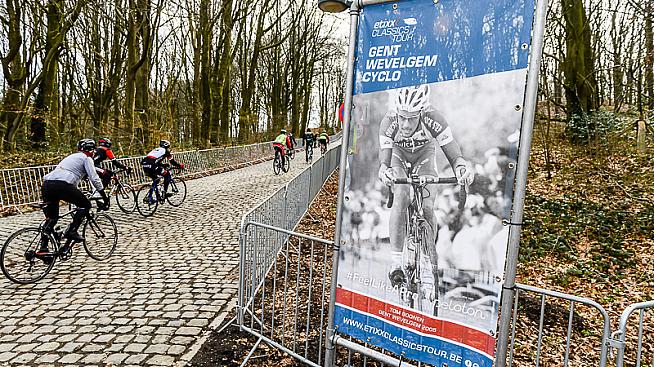 At the end of Plug Street we had more waffles foisted on us and then began heading back eastwards in earnest, eventually riding along the north bank of the River Lys, hitching rides with passing trains, all the way back to a grandstand finish across the line at Wevelgem. Youth and exuberance was beaten across the line by age and deviousness, but the ever smiling George was the one with time to pose for the camera to get the better photograph.

We had plans to stay an additional day to take in the pro race and to head south to Roubaix and the Carrefour de l'Arbre, but unfortunately we had to pack up and head home early due to work commitments. A pity, as Kortrijk would have been an ideal base for a proper pavé adventure - we may just revisit the area later on this year, and I might get another chance to conquer the Kemmelberg.

This storied secteur of northern Europe is well worth a visit for any history buff, cycling or otherwise. Booking through Sportive Breaks took all the stress out of trying to find good local facilities, essential for first-timers to the area but equally valuable to the more experienced traveller looking to revisit the area and explore further. They offer a range of packages for all the major UK and European sportives: for more details check out the website at www.sportivebreaks.com.

Gent-Wevelgem Cyclo is part of the Etixx Classics Tour, a series of nine sportives in the cycling heartland of Flanders. The next ride is the Scheldeprijs Cyclo on Saturday 7th April. For the full calendar visit etixxclassicstour.be.