We'd all like some winter sun at this time of year - but what if your bike heads off to Spain without you?

Sounds unlikely, but that is exactly what's happening to some London cyclists, who have had their bikes stolen only to find them turn up for sale on a Spanish Facebook page.

"In 2014, James Vernon had his Parlee Z1 bike stolen from his flat in Islington, London. What followed was an extraordinary story of a bike being reunited with its owner thanks to the kindness of a complete stranger in Spain and the power of social media.

More than 20,000 bikes are stolen each year in London, but the chance of an owner being reunited with their ride is extremely small. Most cyclists report their stolen bike to the police but that tends to be the end of the road.

James was not satisfied with the conventional route and became proactive by taking his search to local bike shops and posting the details online. The search went quiet until, out of the blue in October 2014, four months after tweeting @StolenRide, Armand Paul Kabarec-Quiroz replied to the original tweet asking James to get in contact.

'The Cinelli pops out for sale, I manage to get the guy's info and tell him that the bike was stolen and that the police in London, Italy and Spain were looking for it. He then gave up the bike to the Zaragoza Police and I got the bike back for Paolo its owner at the Red Hook Crit Barcelona.

'After I got back from the Red Hook Crit Milan, looking through the same buy-sell Facebook page, I saw that the same guy was selling a high end Parlee Z1 for 1700€ and claiming it was new. Didn't look right.' 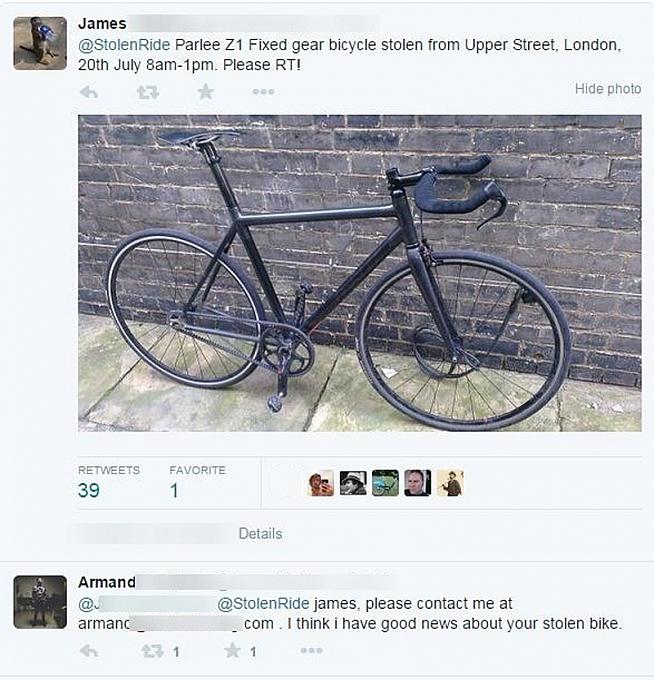 Your stolen bike is sipping sangria.

'I knew it was his bike, there are not that many Parlee with a single speed and with a belt for the drive system. It was clear it was also stolen in the UK like the Cinelli and that the same guy was selling it. It had to be James'. And I basically told the guy again the same as when I contacted him for the Cinelli. In a couple of hours he sent me a message that he was going to bring the bike in Monday morning. And he did!'

Armand kept contact with James through a lengthy process between the Spanish police and a helpful officer in the Met to reunite James with his bike. The process has taken many months to complete.

'Armand has been great in helping push this process along with the Spanish Police,' says James.

In January 2015 James travelled to Barcelona, and in the last week has received his bike safely home. The indications from the police are that James' bike is one of many stolen that has been shipped into Spain from London. It has been hinted that the Spanish police have little available resource to follow up on these bike leads, so it does come down to people like Armand keeping an eye out.

Armand is currently working to help get a stolen Canyon road bike, worth over £2k, back with another owner in London! "It was really hard to find the owner, because they only published on LFGSS... If they had put it on Stolen Ride, I'm sure it would have been easier to find."

Richard Cantle is delighted by the success story. "I could not be happier for James, and am thankful for the work that Armand put into making this possible. It really shows how unique and strong the cycling community is around the world and the true connecting power of social media. This is not the first time we have received positive news."

"I'm proud of every person that makes up the @StolenRide community; retweeting stolen bikes can truly spread the word quickly around thousands of people. I urge cyclists to never give up the search if their bike is stolen and to keep battling the ever growing issue of bike theft; together we can make a difference!"