Another sportive, another "extreme weather warning" from the organisers. But while the Etape was hit with your common-or-garden variety low cloud, cold and mountain rain, Sunday's RideLondon-Surrey 100 was in the direct path of Hurricane Bertha.

But that was almost the only similarity between the two closed road rides. While the Etape was about learning a little of the reality of riding roads previously only glimpsed on television as the Tour climbed and descended them, RideLondon was about transforming the mundane into fantasy.

Because I knew these roads, trained on them, grew up with them in fact, but on Sunday I owned them. The buses, cars, HGVs and pedestrians were gone. There were bikes and only bikes, and only going one way - the way I was riding.

Prudential's RideLondon-Surrey 100 sportive is in its second year. Incredibly popular (24,000 signed up), this ride cashes in on road cycling's rising popularity in the UK in a bid to replicate the success of the London Marathon for bikes. 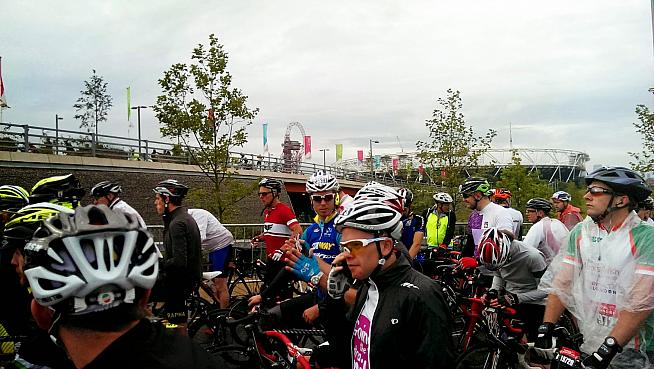 Waiting to start the the 2014 RideLondon-Surrey 100 in the Olympic Park.

Leaving 2012's Olympic park, cycling by the Velodrome where Laura Trott et al won gold two years ago, the RideLondon sportive takes off through central London - spinning through the heart of the city then along the Thames before heading down and out through Richmond Park, Kingston and then into Surrey to find some hills.

These were the first of my out-of-body experiences. I've been through or around Richmond Park on a bike more than 70 times in the last couple of years - it's my go-to training ride. More, I was brought up a few minutes' walk from Kingston gate - this is where I learnt to ride a bike as a child, walked the dog and kicked a ball around with friends.

Today it was nothing but cyclists, there wasn't even the risk of a stray deer crossing the road as barriers protected us. I flew. These were my roads, and there was nothing to stop me. Apart from the other cyclists, of course.

I averaged almost 35kph in the Park - setting new personal records on Sawyers' Hill, scything through the gaps other cyclists left. We exited the park and spun along Queen's road, past the house of an old family friend, past my primary school, past red lights and not stopping at junctions.

They were my childhood roads, but today they belonged to riders and riders alone. I was one of them.

Screaming down Kingston Hill - at one point past actual cheerleaders, with pompoms and everything - at more than 40kmh average and into the town I grew up in.

I was going hard at the start, 20 miles in I was averaging more than 36kph, heart rate generally around 160, driving up 3% hills at 32kph and finding almost no wheels to follow.

Coming out of Kingston and running down to Hampton Court a group of five riders came by at around 40kph, I latched onto the back. We stayed together for five or six kilometres, while my average speed rose to 38kph and my effort reduced. I came onto the front to do my turn, they stayed with me, then I lost them as I tried to drift back and regain my place in the train as we hit a junction.

At this point the rain hadn't started.

But it was coming - and soon. We'd been warned, but not really believed. Saturday was sunny and warm and the morning, while overcast, had been benign. But the organisers were so worried about it they'd cut two of the three hills (and more importantly their descents) from the route for safety reasons. So no Box Hill, no Leith Hill and no 100-mile ride. It had been cut to 86.

But this time there wasn't a mountain to descend in 5-degree temperatures (excl wind-chill) with no visibility. It was wet, but warm. I almost entirely disregarded the "wear waterproofs" advice - in the end pulling on a weather resistant gilet, wearing a cap to keep as much of the rain from my sunglasses as possible and leaving it at that.

When it hit there was no escape. The rain fell so hard it stung any exposed skin. Your face, your arms, your legs. It felt like angry hail.

The wind turned flats into climbs. My speed dropped. Water pooled on the roads and drafting became an exercise in eating spray from other riders' tyres - crossing a man-hole cover on a corner meant road rash.

Puddles became ponds, then small lakes. Entire sections of roads under a foot of water - climbing Coombe Hill late in the ride the drains on the road became geysers: spouting water into the air as they failed to handle the quantity of water falling from the sky. A warning cone floated gently across the water under a rail bridge in Esher. 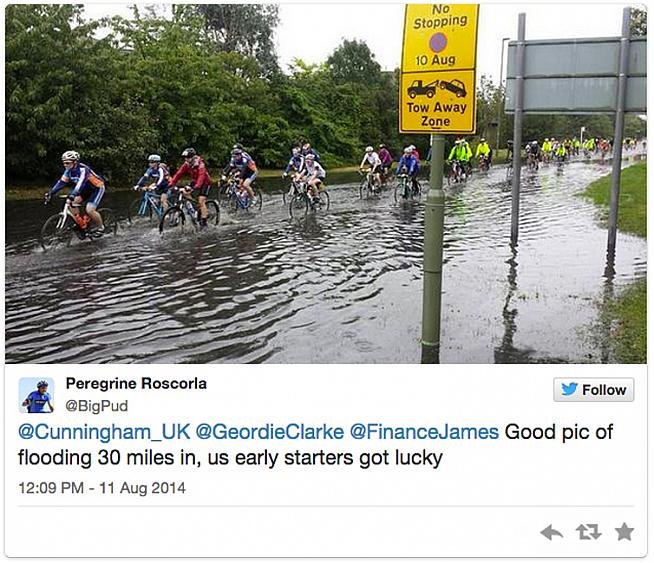 Torrential rain left some sections of the route flooded.

I got wet, then wetter, then wet through. But I wasn't cold. I stopped carefully coasting through puddles (it wouldn't keep me drier) and started riding through. Corners were taken as straight as possible, often hindered by other riders being far more cautious than me.

My mission was to get this over with as fast as possible - but I was starting to hurt. I'd gone off too hard and not drunk enough. My legs were feeling it and I couldn't find a wheel I was happy following. I took Newlands Corner - the only thing left on the course that could be described as a hill - easy, really easy, and stopped at the 'hub' at the top for a few minutes to eat, drink, rest my back and - er - relieve myself.

This helped, but my average speed was dropping. From 36.1kph after 40km, I was down to 33.5kph as we buzzed back into London.

Adding in the break stop (which was only a few minutes, but I hadn't timed) I was at serious risk of missing a 20mph average time. I've never had a long ride with a 20mph (32.2kph) average. I would rarely get a better opportunity.

I dialled it back up. Speed less than 35kph? Push harder. Heart rate under 155, push harder. Flat road? Push harder. Descent? Push. People beside the road handing out gels and water like it was a feeding zone in a pro race? I went by without pulling over.

At some point in the final 10 miles I passed my flatmate. I've no clue when. At another I was drafting then pushing when I heard someone talking to my left; it was Laura Trott riding with her sister and father. I almost entirely missed them too, catching only the word "Trott" as I rode by then frantically glancing back to confirm the pretty blonde was wearing Wiggle Honda kit.

I was eating as much as I could to sustain the effort, I was almost done and I was damned if I was going to miss out by seconds.

The ride briefly coincided with my commute to work as we approached the Mall and the finish. I wanted to take the time to relish a road with no cars, but was busy pushing.

Cyclists round the final bend onto the Mall.

How tired was I at this point? Well, with a clear run up, no cars, buses or lights and on a road bike, I didn't top my best time when commuting with a backpack on a single speed. Not even close. But I was still running above 36kph. We hit the "1 mile to go" sign by Big Ben - I left the saddle with a battle cry and pushed harder again.

Finally rounding Trafalgar Square and running down the Mall I pushed to 40kph, slip-streamed another rider and sprinted for the line... I got the sprint wrong, leaving it too late and only hitting 45kph before the clock cut me off.

Because that's another difference between this ride and the Etape: rather than a two hour coach ride to the hotel, packing my bike and clothes away, two more hours to the airport in another coach, checking in, flight, waiting for luggage, and hour-long taxi to get home, today I was just 4 miles from a shower, warm clothes, beer and my own bed to collapse in if I chose.