We're in the Eurotunnel car park on the Friday before Paris-Roubaix. Through the windows of the parked cars, we can see back seats down and expensive-looking bikes peeking from under towels and rugs. Other cars have bikes displayed proudly on roof or boot racks. From the ordnance on display it seems many have had the same idea as us: an attempt to conquer the cobbles and survive the Hell of the North.

My Dad had emailed me months earlier, back in January, with a link to the Paris-Roubaix Challenge website. I had thought this a fantastic opportunity to ride some of the most famous stretches of road in cycling. Being slightly daunted by the hellish cobbles I had heard so much about since my dive into cycling, I opted for the shortest route option of 70 km.

I have only been cycling since Christmas, and the idea of tackling Paris-Roubaix, touted as one of cycling's most difficult races, was worrying to say the least. However, as a new scholar of the sport I knew it had to be done. After all, cycling's unique position as a sport in which a complete amateur, like me can have a go on the same ground as the world's best pros, is one of the reasons so many are drawn to it. My Dad, aged 51, has been cycling for almost two years and was a good deal fitter than me, a sloth-like 23-year-old student.

I quickly got to training around my home base in Norwich. It turns out Norfolk is quite a suitable training place for such a race, the similarities with northern France are many: flat, agrarian land with picturesque lanes that can go on for miles and miles. Norwich city centre is also dense with cobbles, albeit lovely smooth cobbles that lulled me into a false sense of security. I finished my training convinced that Roubaix would be easy and the cobbled sections were nothing to worry about; a frankly hilarious overconfidence on my part, as the local cobbles are about as equivalent in comfort to pavé as a Thai massage is to Thai kickboxing. Nevertheless I put in around 100 miles a week and I felt ready by the time the Roubaix weekend came around.

Friday - the road to Roubaix

After an early morning start and a quick drive and Eurotunnel trip we were in France and headed towards Lille in what seemed like a kind of British cycling convey given the large number of GB plated cars we passed. Our hotel, a Campanile just north of Lille, was full of other British people who had come for the cobbles. All were slowly wheeling around the car park, tweaking bits on their bikes and slyly eyeing up everyone else's rides like dog owners at some kind of pre-Crufts parade. 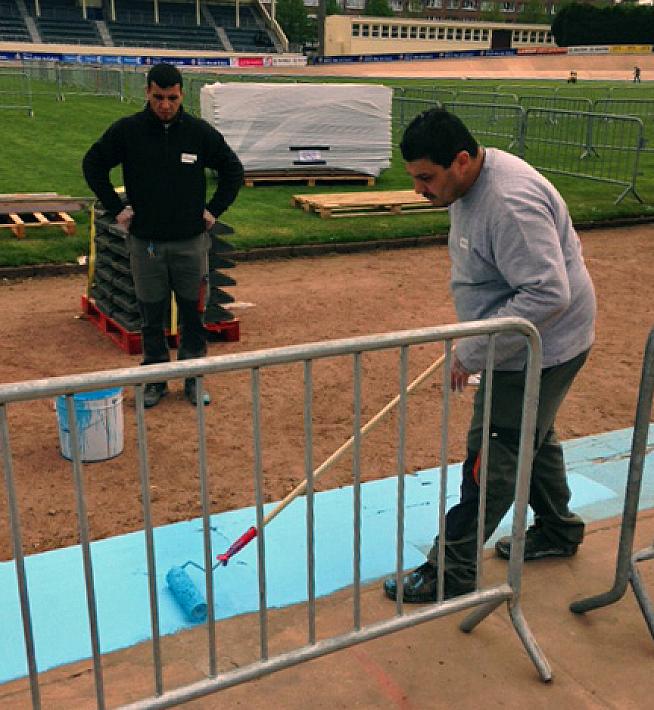 Dad and I headed for the Velodrome where we registered and had a stroll around the area. The whole complex was gearing up for the weekend's festivities; lines being painted on the track, riders having a drink and discussing bikes and who their picks for Sunday were. We had a look round the Douches Mythiques and admired the names of past winners that adorned each individual changing stall. 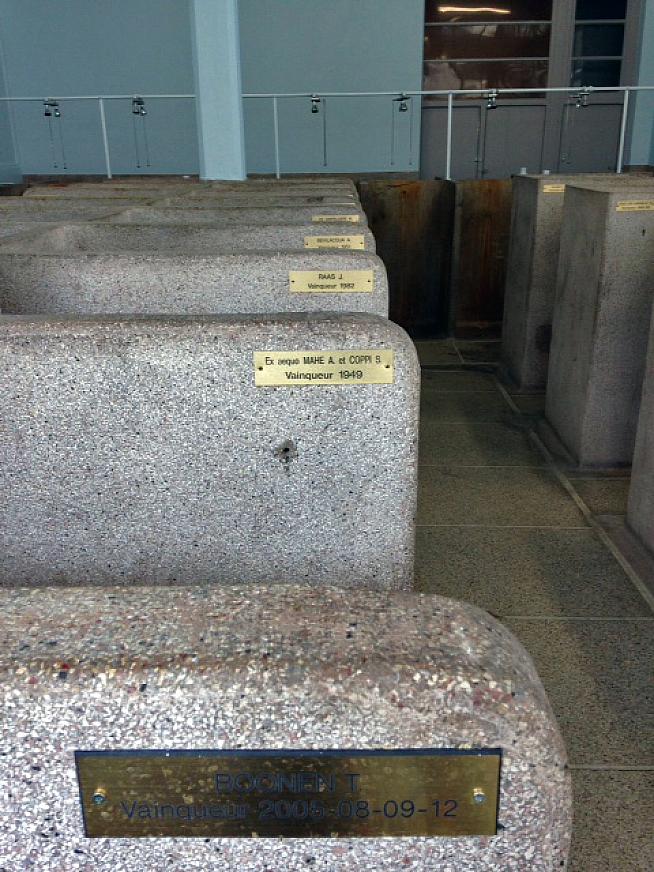 From the stadium we travelled south to Gruson for some reconnaissance riding. We wanted to take in a few cobble sections so that when we arrived on Saturday we would be prepared (the planning of the naïve, as even with practice there is no amount of preparation that makes the sections easier). We rode from Gruson down to Cysoing where we picked up the race route taking in five of the sections including the Rue de Tournai and the Carrefour de l'Arbre. My Norwich cobble practice proved inadequate for the pavé of northern France. Hitting the sections for the first time was both exhilarating and exhausting as your body is shaken to pieces. In my hubris I had vowed I would take every section up the middle, a policy that was soon abandoned as I sought the relatively smooth and grassy edges of the pavé at any opportunity. Still, the feeling of riding the pavé is amazing. It makes you feel alive.

We returned to the hotel and prepared ourselves and our bikes for the morrow's riding, attaching route stickers to top tubes, oiling chains and laying out mechanical and nutrition supplies. After a trip into Roubaix town centre for some supper we retired early in preparation for the morning's effort.

We awoke at 6:30 to arrive at the Velodrome for an 8:30 start. In the hotel car park riders made their final preparations and adjustments silently as the morning mist hung heavy over the town, a mist that would thicken the air for much of the morning. We arrived at the Velodrome and set off under the inflatable banner to begin the ride. We cycled in various groups as we travelled south from Roubaix, following roads running parallel to the Belgian border. I had decided to elongate my distance by about 35 kilometres to take in more of the cobbled sections and so turned off earlier than many of the riders who carried on further south to their first section of the day, Arenberg. 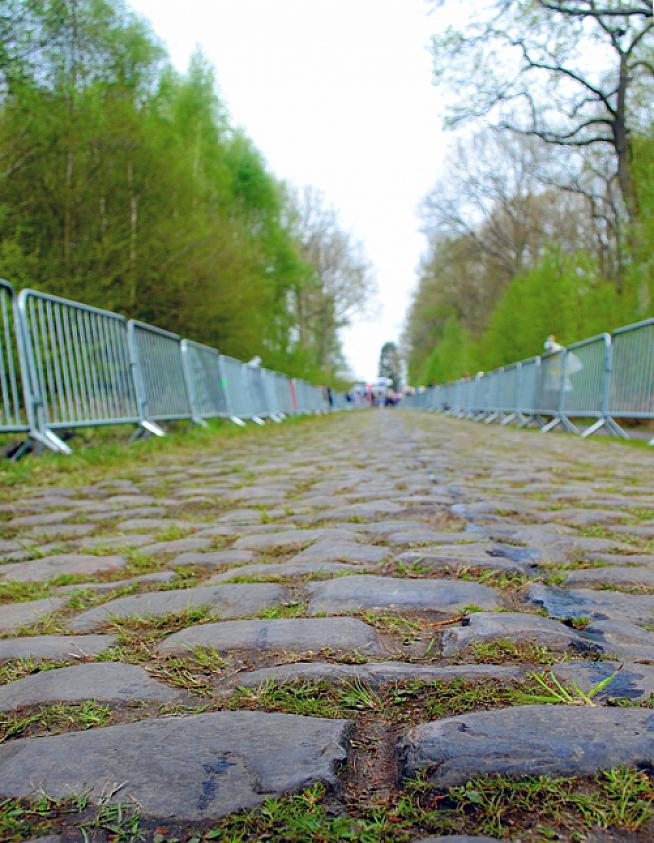 My unique route meant that for much of the sportive I was riding on my own, just the sound of my wheels whirring in the silent mist, occasionally being passed by the mega fast riders who were leading the longer distances. The first pavé section I came to was three star Orchies section. Riding the sections alone in the mist was an awe-inspiring experience; it was just me, the bike, and the legendary stretches of track. You cannot let off the pace, you cannot coast, and you must keep pedalling in search of respite from the vibrations.

Every person you talk to has had different experiences on the pavé and everybody has different aches and pains from riding them. For me it was my hands. I had read not to grip the bars too tight and I did not, I let them vibrate around in my hands. I had also inserted gel pads under the bar tape for some partial comfort. Nothing seemed to help. By the end of each section it felt as if magma had been injected into my knuckle joints. The pain was, however, quick to subside so by the time the next section rolled around I was ready to go again. On one section, I believe it was the Mérignies à Avelin, I passed the Giant Shimano pro team training for Sunday's race. They rode silently back and forth, looking totally focused and totally badass. 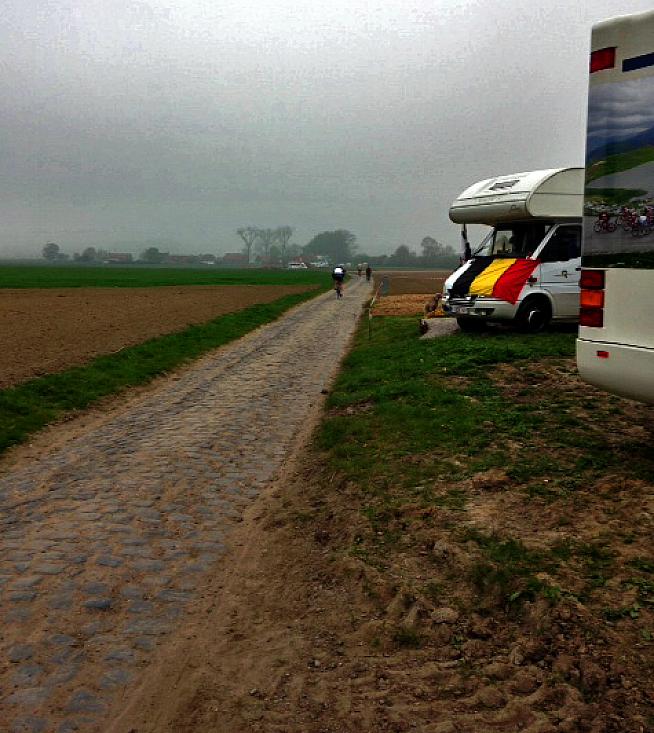 I eventually reached the feed zone at Templeuve, 37 kilometres from the finish line. The station, much like the marshalling and organisation of the whole event, was superb. I stocked up on bananas and energy bars before heading back into the now dissipating mist for the push to the finish line. The last few sections definitely felt the toughest as I struggled to maintain a high cadence over the dusty surface. The Carrefour the second time round was no easier, especially as now I had to avoid a high volume of other struggling cyclists weaving around the single track pavé.

After the Carrefour I swallowed a couple of Ibuprofen as the hand pain was starting to take longer to ease after each stretch of cobbles. The sun began to come out and as I made my way back through the streets of Roubaix I started to want to do it all over again. I was sad that the experience was coming to an end. I had tried my best to take it all in as I was going along rather than just laying down the V. I turned into the Velodrome, surprised by the steepness of the banking but I had to go up it didn't I. I rode up and around the track in trepidation as falling off and sliding to the bottom would be decidedly embarrassing given the hundreds of other cyclists who had already finished on the other side of the track. I finished rather anticlimactically in a time of just over four and half hours and had a burger.

I had been lucky in that I'd avoided mechanical issues (Dad had four punctures), and despite my blasphemously thin 23mm tires I felt pretty good. I waited for Dad to finish and we sat on the grass in the middle of the track, talked about the ride and watched the other cyclists coming to the finish. The experience was fantastic and a must for any cyclist with any kind of romantic affliction for the sport.

What's more, you get to watch the pros the next day. Discussions of viewing tactics for Sunday's race were rife in the hotel bar that night. There seemed to be two schools of thought. One, drive to a very early section, watch the riders go past and then race to the Velodrome for the finish. Two, take in multiple sections but sacrifice going to the Velodrome, which by all accounts is difficult to get into. We opted for the latter.

Sunday - the turn of the pros

In the morning we drove down the motorway to our first spectator section, Arenberg. Here we popped into a local patisserie before taking up our position near the end of the infamous section. We waited about an hour and a half before the riders came past. The sense of anticipation was fantastic, as was the flurry of cyclists and support cars that came tumbling down the cobbles. 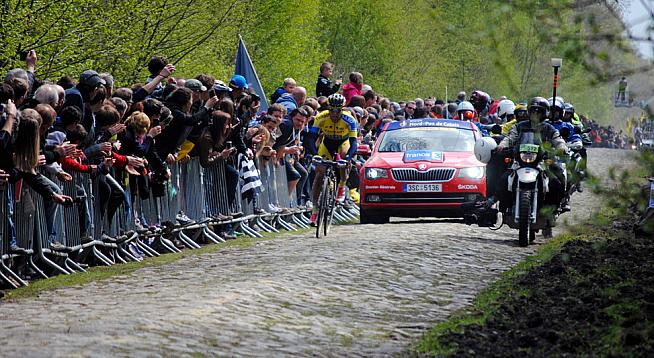 After the peloton had passed we ran, together with what seemed like everyone else there, back to our car and high tailed it back onto the motorway to our next section, the Carrefour. Here the crowds were less dense but the racing was, if anything, more spectacular. Like Arenberg the anticipation was rapturous. Above we could see the helicopters gradually getting closer and closer and the clouds of dust from the peloton in the distance over the fields. We were unaware of who would pass first; other spectators listened to their French and Dutch radios but we were oblivious. Eventually Sagan came whizzing past on the dirt path at the road's edge (also my tactic). He was followed by the maelstrom of other dusty riders and cars and well, you know what the rest of the story is. 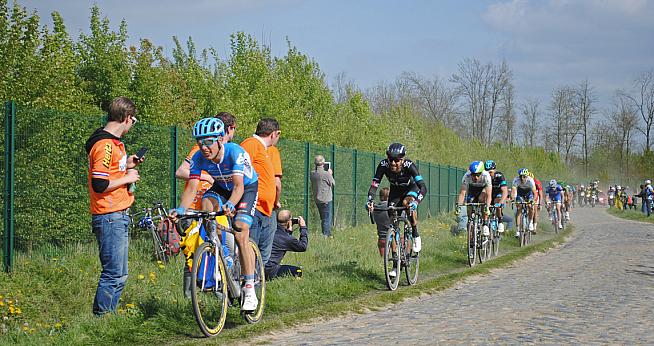 The Carrefour proved a particularly good spot to watch because riders kept on coming through in dribs and drabs for about 25 minutes after the leaders had passed. We were fortunate enough to see the end of the race on a friendly Dutchman's iPad, who was understandably excited by the race's result as Niki Terpstra rode to a thrilling solo win.

After the race had finished we passed into Belgium before hitting the highway back to Calais and home. As a weekend break for cyclists Paris-Roubaix surely has no equal. The whole experience was just amazing fun, and a cycling adventure to remember.