Liege-Bastogne-Liege: a monumental challenge over 273km

We arrive in Liege in magnificent sunshine and 25c heat having taken in a couple of the famous Flanders climbs, the Koppenberg and Muur, on the journey over from the UK.

Liege-Bastogne-Liege, or LBL, is one of cycling's most famous classic races and one of the "Monuments" of European cycling. It is also the longest-running race in the calendar, having first taken place in 1890, hence its nickname of La Doyenne ("the oldest").

All four of us in the party had decided that we wanted to take in the pro race experience and signed up to the full 273km distance, which we found out later is actually 20km or so longer than the pro route! 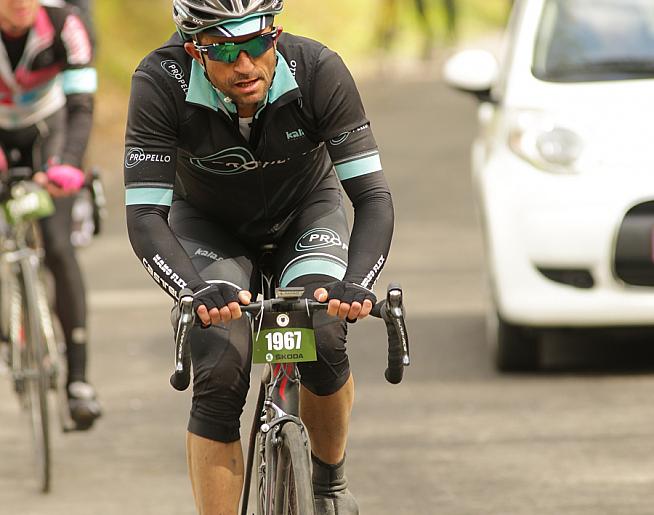 With 40km to go the knee pain becomes agonising.

Having checked into our hotel, the Husa, opposite the magnificent Liege train station, we headed over to the Halles des Foires to check in and look around the expo. Race number - check, timing chip - check, route plan sticker - check, finishers T-shirt and medal........that seemed maybe a little presumptuous, so we decided to get the T-shirt but leave the medal until we had actually finished, not wanting to tempt fate.

We head back to the hotel and to a local restaurant called Mirabelle so that we can put the finishing touches to our week-long carb loading diet, which frankly had left me heavier and feeling a bit bloated. Amazing garlic bread, soup and pizza with a couple of beers seemed to be in order and we were tucked up in bed at 11pm feeling fuelled and excited by the ride the next day.

6am breakfast and the hotel is buzzing with cyclists from all around the world all trying to get their bikes into and down the two lifts to make the 7km ride to the start line for 07:00.  Unfortunately the weather had broken and it was cold and very wet.

I can't lie and say that it is the most beautiful place to start a bike ride, but after a few km riding through the suburbs you are onto the first climb out of town which is not steep, but starts to split the large groups of riders. We ride at a steady pace with a group of mainly Dutch riders to the summit and are then into rolling countryside with some fast sections, but still enough ascent to make you realise how the ride racks up 4500m of climbing with only 10 categorised climbs.

We get to the first feed station in Bomal and although none of us really needed to eat we still managed to pack down some fruit and a waffle or two. It was a quick three minute pit stop and we were off again in pretty much the same group.  At 85km, after a long and fairly sketchy descent in the rain we arrive at the foot of the first categorised climbs, the Cote de la Roche-en-Ardenne. At 2.8km and an average gradient of 6% it is not the toughest, but these European riders do seem to love to put in a dig on the climbs and then ride easy at every other opportunity. 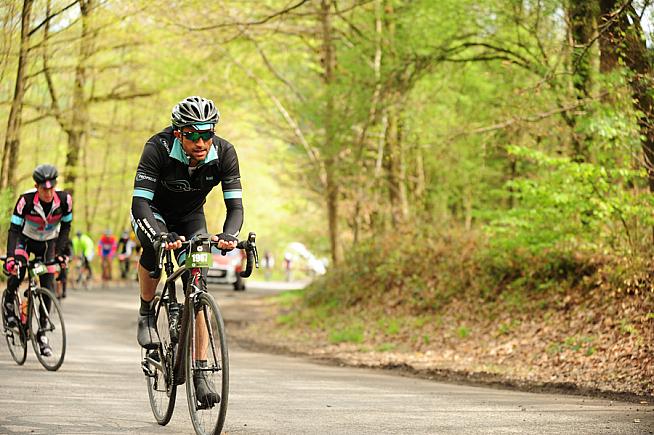 Not out of the woods yet - the LBL sportive adds an extra 20km to the pro race distance.

At 112km we reach Bastogne, which is a significant psychological point in the ride for me, as not only are we as far south as we are going to get, but we now have a tailwind pretty much the whole way back. This area of Belgium is steeped in war history and as we pass through the battlefields there are tanks parked on roundabouts and corners, a constant reminder of the pain inflicted on this area of Europe.

As we leave Bastogne one rider turns to me and says "the ride only really starts here". Comforting.

It's now 63km to the next feed station at Gouvy, but not before the Cote de St Roche, which is not long, but is very steep and heads straight up between the houses making it look even steeper. Here the group starts to split big time but we make the 63km section in well under two hours.

At Gouvy we fuel up properly with fruit, more waffles and refill our water bottles and set off for the toughest section of the ride. We find another group to ride with and cover the 40km or so to the foot of the Cote de Wanne quickly, although we seem to be spending an alarmingly long time on the front by now.

The climb up Cote de Wanne is long and narrow with a bad road surface and a kick at the top. We ride this at a pretty solid tempo and near the top the Dutch guy we have been carrying up turns to me and says "Stockeu next - it's a nightmare".

A fast descent into Stavelot and a sharp right turn and there you see the wall that is Cote de Stockeu. 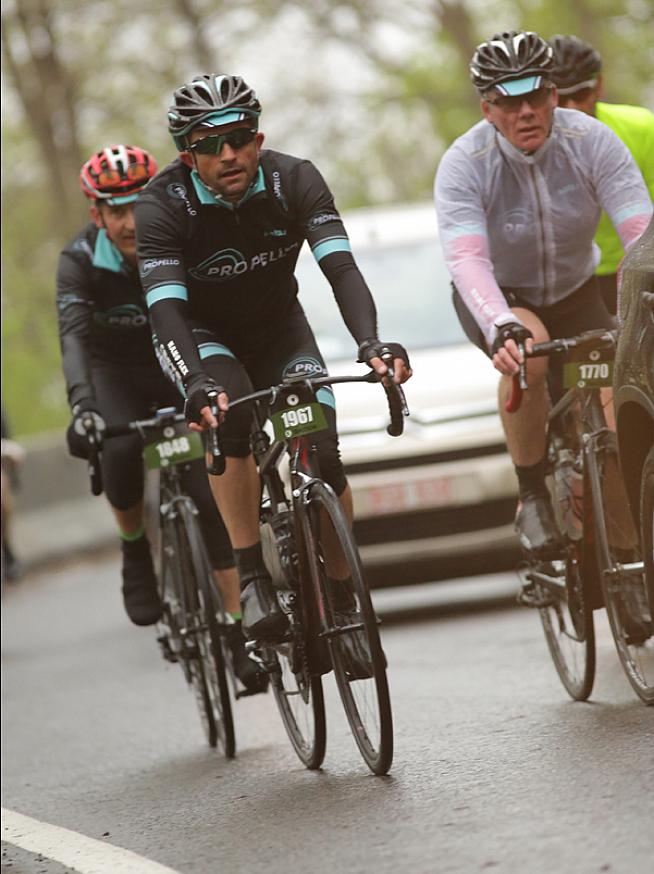 Conditions were typically Belgian for LBL 2015.

I crunch the gears having entered the climb in the big ring and immediately I am out of the saddle. 1.1km of viciously steep and narrow road unfolds, starting at well over 10% and finishing in the woods where the road becomes very narrow.

The descent is fast, rough and dangerous. A sweeping right-handed bend at the bottom launches you onto the cobbles of Stavelot, at a pace that I find uncomfortable in the wet. I get the history with cobbles but I don't like them; after 1.5km through the town I am all cobbled out.

I find the next two tarmac climbs of Cote de la Haute Levee and Cote du Rosier a welcome relief. 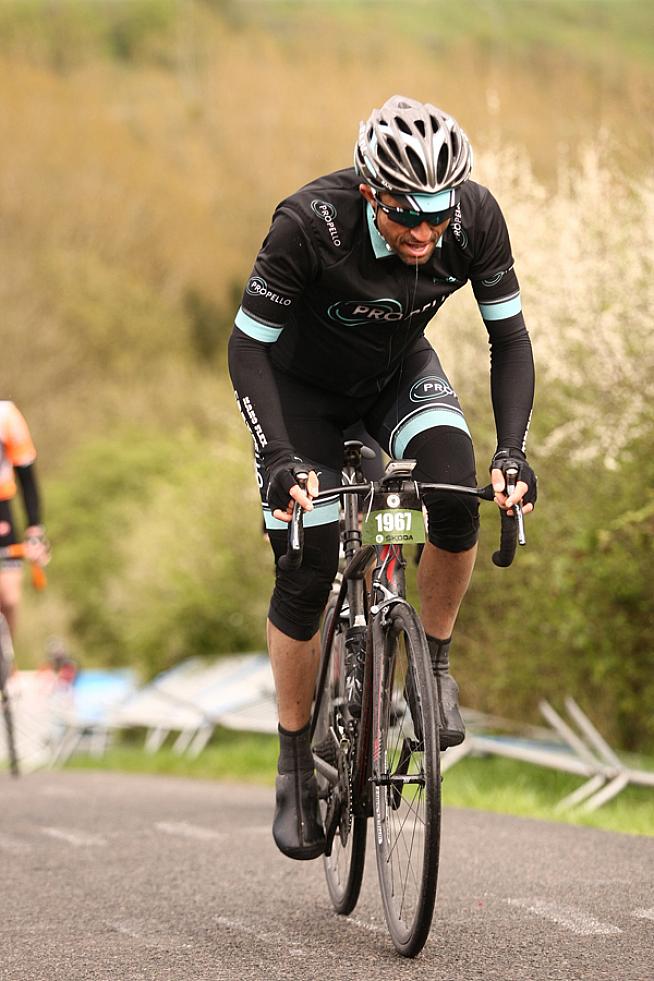 The 10 categorised climbs packed a punch.

226km in and we hit the Cote de la Redoute that averages 8.5%, is 2.1km long and has two sections at over 20%. You go under the motorway and the road starts to kick up. The first part of the climb averages around 10%, then you swing round to the left and the gradient rises to 20% and I am out of the saddle again trying to keep forward momentum and my eyes away from my power meter (when I looked after the ride it averages 325w for just under eight minutes, which in theory I can't do!).

A merely 10% section arrives, which feels amazingly flat after what has just passed. Just when you think you have broken the back of it another 20% section unfolds to the top where I now have wipe the dribble from my chin and top tube.

It's 40km to go and I bypass the last feed station in Spirmont and push on home now as a solo Propello rider, after my final riding partner punctured for the first of four times before the end. The Cote de la Roche Aux Falcons starts over the level crossing and then kicks up corner after corner with what seems like a constantly changing gradient.

My legs are starting to hurt at this stage and the niggling knee pain that I have had for the whole ride is now an acute pain on every right leg rotation. 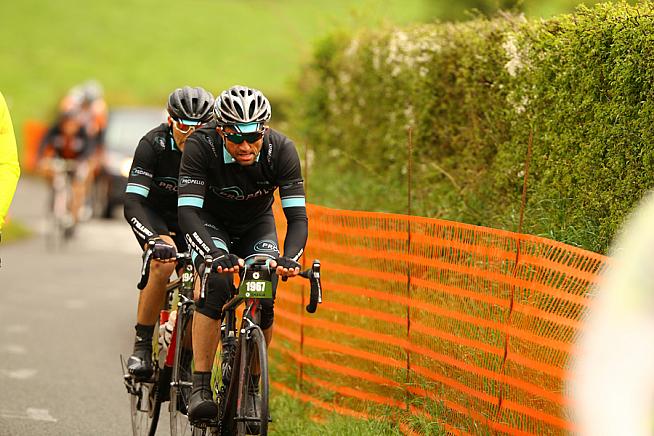 Hard miles on the return to Liege.

We enter Liege in some sunshine, which is just as well as it is a pretty grimy industrial area of the city with little going for it. I am now in a group with two Rapha-clad, red-bearded riders who are pushing the pace and testing my staying power. We hit the final official climb, Cote de St Nicolas, which runs right through a housing estate with an average gradient of 12% over 1km.

By now the knee is agony and I just managed to keep the pedals turning, corner after corner to the top where we descend over more cobbles, to the final 1.5km climb to the top of the city. A fast, and again cobbled, descent and I am back at the Halles des Foires and have finished.

Elated and slightly emotional, I now think I can pick up my finisher medal and grab a well-earned Leffe... and then another one...........

I set myself a target of sub 10 hours and finished in 9hrs 47 minutes, which I was pretty pleased about. I probably stopped twice more than I needed to and would have been quite a bit faster in the dry. It was an amazing event that was well organised and very good value for money at €25.

Cycling Weekly described Liege-Bastogne-Liege as the toughest classic and I can see why. It is, however, a great ride in a country that is cycling obsessed and I would highly recommend it.

Rob Wakefield is a fully qualified Level 3 Cycling Coach with the Association of British Cycling Coaches and founder of Propello, a cycling focused health and fitness business delivering Performance Training Programmes and Bespoke Coaching to cyclists anywhere in the world.

All cyclists who are looking to improve their speed, endurance or strength will benefit from a structured training programme. Propello Training will improve how your muscles, lungs and heart work and will enable your body to transport and utilise fuel effectively - making you faster and stronger for longer. For a free trial training programme, visit www.propello.com.