National Blood Cancer charity Cure Leukaemia (CL) have announced a brand new cycling event that will see a team of 30 amateur cyclists riding their way across Great Britain next September.

The 2023 Tour of the TAP has been designed to see the team cover over 1,000 miles across ten inspiring days on the saddle. The route will visit ten of the UK's biggest cities, taking in all 12 of the Trials Acceleration Programme (TAP) Centres that make up the TAP Network that Cure Leukaemia currently funds.

The event is to help raise vital funds for the charity in Blood Cancer Awareness Month in September 2023. Applications are open now, with entry priced £1,500 which includes meals, accommodation and more throughout the event. 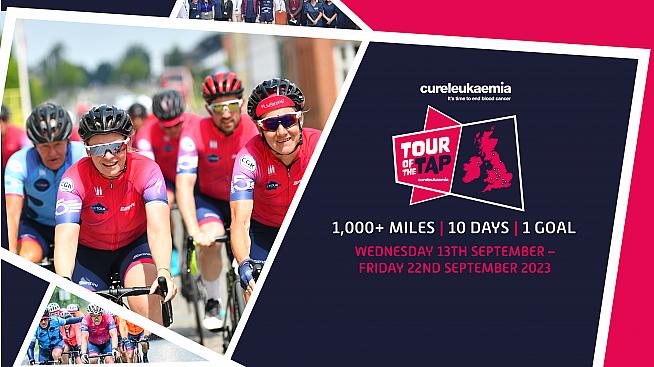 The TAP Network enables the accelerated setup, recruitment to and delivery of new blood cancer clinical trials connecting patients from a catchment area of over 20 million people with potentially life-saving clinical treatments and trials not currently available through standard care.

The Tour of the TAP originated from Chief Executive James McLaughlin and a bold feat that has seen him run 14km around each of the TAP Centres for the past three years and raised over £75,000. He will once again be lacing up his shoes as he looks to complete his fourth Tour of the TAP with aim of topping £100,000 in total and will be looking to finish at the same time as the cyclists this time round.

"We are delighted to expand the Tour of the TAP this year with the launch of our cycling event which will see 30 cyclists join the CL Family for an incredible cause, which will see them helping to save the lives of blood cancer patients across the UK," says James.

"One person is diagnosed with blood cancer every 14 minutes in the UK so that is why I have decided to again run for patients and I would love to have some runners joining me on one (or more) of the stages." 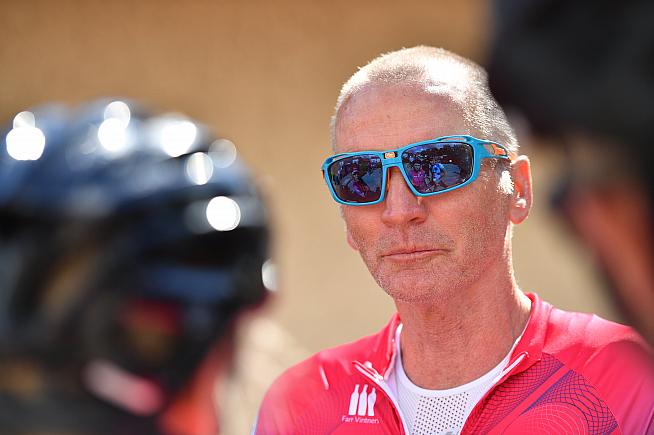 Ride with Team Captain Geoff Thomas MBE on the Tour of the TAP.

CL Patron and former England and Crystal Palace player Geoff Thomas MBE returns to the saddle and will captain the team as they work their way across Britain.

Fundraising from the challenge will be directly invested into the TAP Network which helps those fighting blood cancer and which has driven huge medical advances since Geoff's original diagnosis.

"I am proud to be back on the bike in September 2023 to take on the Tour of the TAP event - and I can guarantee that the 29 riders who join me on this challenge, will have a life-changing experience.

"At Cure Leukaemia, we run a number of overseas cycling events; London 2 Paris and The Tour 21, however the Tour of the TAP is an opportunity to bring our fantastic events, to the roads of the UK. I won't be taking part in The Tour 21 this year (completing all 21 stages of the Tour de France) but I will be jumping on the saddle in the UK and I can't wait for it!

"This is a challenge that will require some serious training - but for 10 days, you will take on a huge feat, be cycling as part of a team - and most importantly, be raising funds to continue to fund the TAP Network."

The 1,000 mile route will see the team start their epic challenge in Belfast on 13th September and cover TAP Centres in Glasgow, Manchester, Leeds, Sheffield, Cardiff, Nottingham, Oxford, Southampton and London (x2) before finishing in Birmingham on Friday 22nd September. The final route will be finalised in March 2023.

Renowned cycling expert Andy Cook will be leading the event on the road and will be guiding the team across the country, tapping into experience built from many years working in the cycling industry and from leading Cure Leukaemia's flagship event, The Tour 21.

Applications are now open for cyclists to join the team alongside Geoff with an initial entry fee of £1,500 and a fundraising target of £5,000.

All cyclists that form part of the team will receive 11 nights' accommodation from Tuesday 12th September 2023 to Saturday 23rd September 2023, including a final night Celebration Dinner at the 5* Grand Hotel in Birmingham.

Official Tour de France Kit Suppliers, Santini, will be providing official event kit for both on and off the bike, and all meals will be provided throughout the event with a full support team on hand behind the scenes.

Find out more and book your place on the team at www.cureleukaemia.co.uk.