Rapha steps in to save "Flanders of the British calendar"

Rapha have announced a sponsorship deal with the UK's longest-running road race, the Lincoln Grand Prix.

The prestigious race faced closure after the withdrawal of a key sponsor in 2019, but the deal, which will see the race branded as the Rapha Lincoln GP, secures its future for at least two more years. 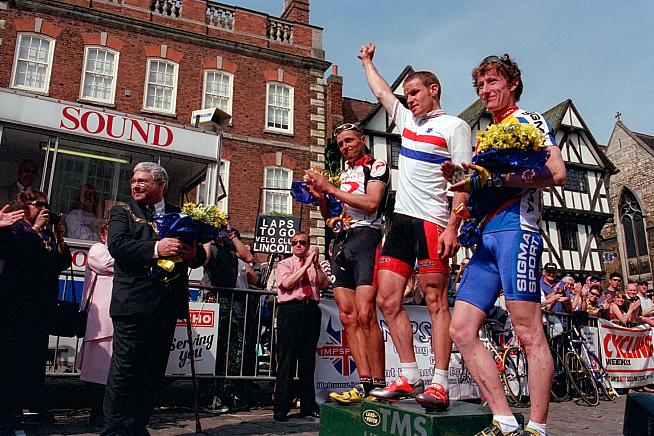 Is that Matt Stephens? The ex-GCN presenter on the Lincoln podium in 2001. Photo: Brian Townsley

Taking place each May since 1956, the Lincoln GP has been described as the last remaining monument of the UK cycling calendar. The circuit passes through the city centre and between Lincoln Castle and Lincoln Cathedral, tackling the race-deciding cobbled climb of Michaelgate each lap.

In January the race organisers announced that 2019 was possibly the last edition of the Lincoln Grand Prix, due to a lack of sponsorship funding.

However, Rapha stepped in. As part of the two-year title sponsorship deal the event will be titled the 'Rapha Lincoln Grand Prix', and the men's race and women's race will be given equal weighting.

In addition to sponsoring the race, Rapha will work with the organisers to develop a sustainable model for this and other cycle races that could be aplied worldwide.

Dan Ellmore, Lincoln Grand Prix race organiser since 2015, said: "The Lincoln Grand Prix team are excited to be working with Rapha for the 2020 and 2021 events and to help develop a more sustainable approach to the race to ensure we can continue adding to the history of the event for many years to come.

"Having a brand such as Rapha recognise the importance of the event and get behind us to keep it running is a fantastic position to be in and we're really looking forward to working with them."

"The Flanders of the British calendar"

The rescue package has also been greeted with relief by past winners. Dean Downing, winner in 2007, said "The Lincoln GP has so much history in the UK, over 60 years of history, so for Rapha to be headlining the event for the next two years is fantastic news.

"The course has everything that the European Classics have, flatlands where the race is lined out and into the famous Michaelgate cobbled climb which leads through the centre of Lincoln city centre. The crowd is always one of the biggest in the UK."

Pete Kennaugh, who won the GP in 2013 and 2015, said: "For me, the Lincoln GP is the Flanders of the British calendar. It's the one race that carries the history and prestige that makes every rider on the start line hungry to win."

Alice Barnes, women's race winner in 2016 and 2017, added: "I have had some amazing memories racing the Lincoln GP. It is such an iconic race, with amazing crowds as you're racing up the Michaelgate cobbled climb.

"It is the biggest British race on the national calendar and I'm so glad the race is going ahead thanks to Rapha!"

Rapha, meanwhile, confirmed the deal fitted in with their strategy to invest in cycling as outlined in the "Rapha Roadmap". It's an ambitious programme, but this year has seen Rapha, in their own words, "put their money where their mouth is", with the recently announced investment in Herne Hill Velodrome being another example.

In a statement announcing the Lincoln GP agreement, Rapha said:

"The race has always been close to us at Rapha. Our London headquarters are just two hours down the road from Lincoln and it was here, in 2007, that Dean Downing took the first major win for our original race team, Rapha Condor. We simply couldn't imagine a British race calendar without the Lincoln.

"For the next two years, Rapha will be the title sponsor of the Lincoln Grand Prix, but our sponsorship is just the start. Using this race as a case study, we will investigate, in practical terms, just how you secure a sustainable financial future for a bike race. The Lincoln GP is our local race but the lessons we will learn by supporting it are ones we hope will be applicable to any race, anywhere in the world.

"Working closely with the organisers, we will explore new revenue streams including Lincoln Grand Prix merchandise produced by Rapha Custom, with all profits going towards the race in a bid to make the race self-sustaining and ultimately less reliant on sponsors. We'll make mistakes, we'll make improvements and we'll document it all so that fans with an interest not just in the sport but also in the financial model behind it can gain an insight."

Taking place on Saturday 9 May 2020 - the day before the race - the sportive offers a choice of distances ranging from 35 to 105 miles, and includes the cobbled Michaelgate climb on closed roads.

Entries are open now priced from £28-£36. For more details and to book your place, visit www.itpevents.co.uk.