Hundreds of riders turn out for Poppyscotland Sportive

More than 900 riders took to the roads and hills of East Lothian yesterday (Sunday, 29th September) as part of the annual Poppyscotland Sportive which will ultimately help to raise tens of thousands of pounds for Scotland's leading Armed Forces charity.

The Poppyscotland Sportive, which first took place in 2014 and is a perennial fixture in our list of top Scottish sportives, offers riders a choice of three routes - 47, 68 or 102 miles - to suit a variety of levels of experience and fitness.

All three courses take participants along the beautiful East Lothian coast and then back though its stunning hills and countryside, with the 100-mile circuit also taking riders over the challenging Lammermuir Hills and into the Scottish Borders. 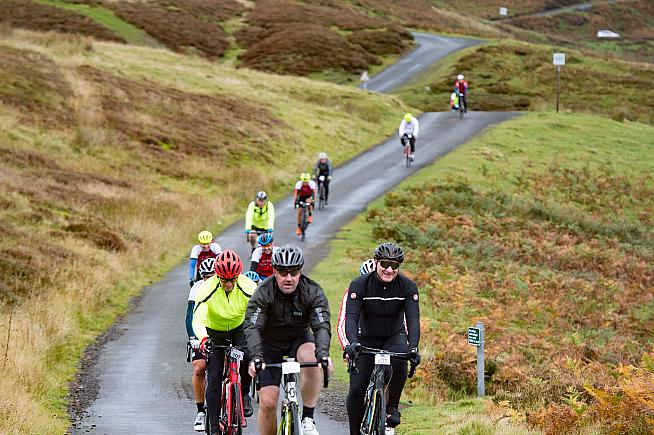 The Poppyscotland Sportive is a fundraiser for the armed forces charity.

This year's event, which was once more sponsored by Fred Olsen Renewables, again featured the timed hill climb just past North Berwick, which allowed riders to take on a short sharp hill climb and battle it out to become the 'King' or 'Queen of the Heugh'. This year, a piper was on hand to encourage riders up the steep climb.

The winning King and Queen will receive complimentary tickets for the 'Walking with Heroes' concert, in Edinburgh, which features Scotland's best-known military, The Band of The Royal Regiment of Scotland.

Taking part in the short route were friends and neighbours Sue Fernandes, 52, and Mary-Lou Docherty, 56, from Cramond, Edinburgh. Mary-Lou is a risk manager, while Sue is an investment manager, whose brother and sister-in-law both serve in the RAF. It was their first Poppyscotland Sportive having only signed up in the past couple of weeks, and they are both raising money for the charity.

They said: "We heard it was a great course and a really good event so we signed up. It has been an excellent route so far, but getting to the top of the Heugh was a relief as that was a tough challenge!

"It's a friendly event, well organised and very inclusive, and it was nice to chat to other riders at the start. It's nice to have a bit of support out there with locals cheering you on, and we will definitely do it next year - and look to get others involved, too."

Meanwhile, travelling through from the west of Scotland were Morag MacFarlane, 53, from Bearsden, near Glasgow, and Graham Reid, 52, from Paisley. The pair, who work together, were taking part with three other colleagues. Morag, who is an export control officer, and Graham, a shipyard worker, were taking on the short route having completed the Poppyscotland Sportive once before, in 2015.

Graham and Morag, whose brother and nephew serve in the Navy and Army respectively, said: "We pick the Poppyscotland Sportive because it's a very special event and we are all raising as much money as we can. We like the fact it's not a race and it's a good event.

"However, the bigger thing for us is that it's for a good cause. The last time we did it, it was the longest cycle we had ever done and we always wanted to come back and do it again. It's a great event, so we'd urge anyone who likes to cycle to get involved." 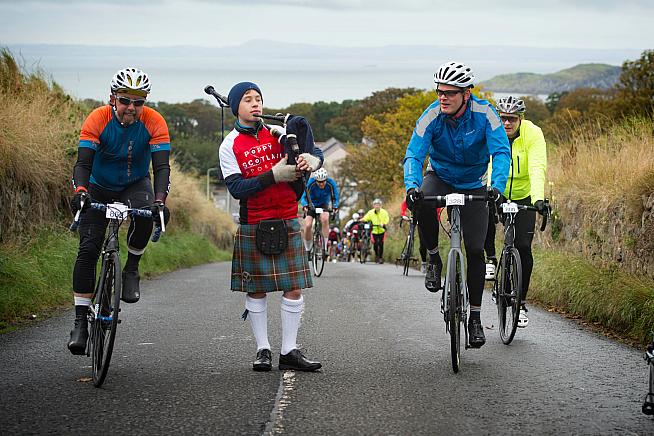 A piper encourages riders on the 'King/Queen of the Heugh' hill climb challenge.

Organiser Katriona Harding said: "Poppyscotland Sportive is one of the most important awareness-raising and fundraising events in our calendar. Over the past six years, more than £210,000 has been raised, which goes towards our life-changing support of Scotland's Armed Forces community that we provide.

"Money raised from events like the Sportive has allowed Poppyscotland to launch our new Welfare Support Service, with a dedicated team across the country to help veterans on a local level. Our ambition to reach even more veterans over the coming year is reliant on our ability to raise more money.

"While the Poppyscotland Sportive is great fun, the fundraising our amazing cyclists undertake makes a life-changing difference to the Armed Forces community to ensure that we are behind them. Always."

Katriona added: "We would once again like to thank the cycling community, Police Scotland, East Lothian Council and Scottish Borders Council for all of their amazing support, and the local community for their patience and support. I can say with confidence that the Poppyscotland Sportive proved to be a positive and enjoyable experience for all of our fantastic fundraisers."

Best known for running the iconic Scottish Poppy Appeal, Poppyscotland reaches out to those who have served, those still serving, and their families at times of crisis and need by offering vital, practical advice, assistance and funding. The charity believes that no veteran should live without the prospect of employment, good health and a home, and we all have part to play in achieving this.