Chopsticks player or Mozart: what sort of cyclist do you want to be?

Since starting my cycling training business a few months ago, I've been trying to understand why coaching (i.e. expert advice) is widely adopted in some sports but not in others. Take golf, for example. When I decided to have a go at waving the sticks in the air a few years ago, I thought "It can't be that hard, can it?" After all, the ball doesn't move until you hit it, so I reckoned it would be easier than squash, which I was competent at.

Golf must also be easier, I thought because, unlike squash, someone else isn't planning to hit the same ball while trying to (discreetly?) barge you off the court. Simple, then - you're stationary, the ball is stationary and there isn't an opponent to worry about.

The truth soon became apparent, and after a few rounds of nine-hole "Army golf" - left-right-left-right-left-right down the fairway - I knew what was needed. A consultation with a professional coach to turn me in to a straight shooting fairway "sniper" (Army analogy ends here!).

Fast forward family life a few years through pre-school, junior school, know-it-all-teenagers, GCSEs, A-Levels and Universities, and golf is now a distant memory. Cycling, my real passion since I discovered the freedom that it brings at the age of 10, has seen off the usurper.

So, why did I reach the conclusion that I needed a coach? The answer, I think, is quite simple and based on human nature - I didn't want people to know how bad I was, and I certainly didn't want to feel incompetent compared to others. 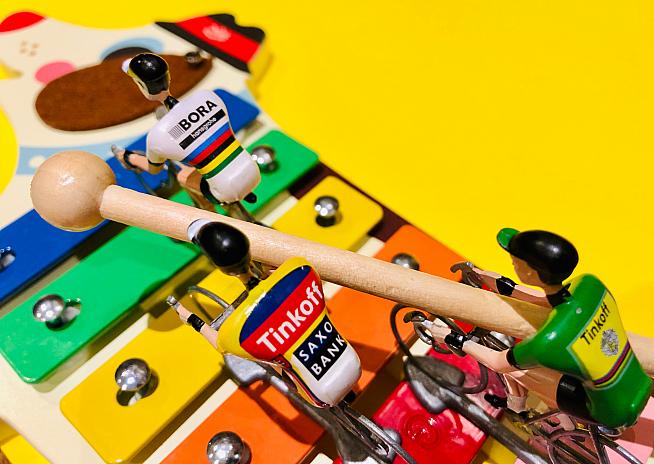 Riding a bike may be child's play - but coaching can help you reach your potential.

Riding a bike simply doesn't come with the same level of perceived embarrassment. I haven't researched any statistics, but I would imagine that most kids in the UK get to ride a bike at some point as they grow up. When the mystery of forward motion and balance has been mastered, it is a skill that stays with you for a very long time (also unlike golf!). No one criticises you for the way you ride a bike - it seems we can pretty much all do it. (Some road users might not particularly like that you ride a bike, but that's a completely different discussion!)

The good thing about this, of course, is that it means riding a bike is eminently achievable by the majority of the population. The drawback however, is that it seems the majority of bike riders are not aware they could be so much better. To me, it would be the same situation if all piano players stopped when "chopsticks" had been mastered. There's nothing wrong with playing chopsticks, but there's a whole lot more beyond that, right to the skill levels of Elton John, Jools Holland, Mozart, Beethoven and, at the very pinnacle, Liberace!

It is my business mission through Sportive Cycle Coaching to make cyclists of the UK realise that coaching is not just for Olympic athletes, Team SKY members, Tour de France racers and friends of Sir David Brailsford. Also, you don't necessarily have to go for a swim before you ride, then go for a jog after you ride, in order to need a coach! (No offence, triathletes...)

Wanting to be better, faster, fitter, more competitive or simply healthier and get more enjoyment out of cycling are perfectly good reasons to have a cycling coach. There are also plenty of very sociable opportunities to demonstrate your improvements in cycling activities such as Sportives, Charity Rides, Club Runs, Holiday Tours and traditional velodrome events.

Now, I suspect that you may be thinking that he's going to conclude this article by regurgitating the line that "Cycling is the new golf". Well, I am - but NOT because I think that cycling is a better environment for business conversations.