I have to declare from the start that I am no DC Rainmaker, but after reading the recent review of Veloforte energy bars and being inspired to give them a try, I thought I would offer some thoughts on Precision Hydration products which I've recently been using on long, hot summer sportives.

Precision Hydration was born out of a frustration at cramping and other hydration issues during major races by Andy Blow, a triathlete with top ten placings in Ironman. Having a degree in Sports and Exercise Science, Andy started researching what was causing these issues and how they could be prevented.

After a few years of research Andy was joined by Dr Raj Jutely, a heart surgeon, who introduced the idea of sweat testing, and through their joint efforts Precision Hydration came into fruition. Before long other well-established athletes joined the team, testing the products prior to the range being launched on the open market and being made available to us all.

The first thing to say about Precision Hydration (PH) is that they are not energy drinks and shouldn't really be treated as such; as the name suggests, they are purely a hydration strategy.

Whilst anyone can go straight onto the PH site and order as many products as you may wish, it is more than worthwhile to follow the process that Andy et al have devised to ensure the best range of products to aid your sporting efforts.

First of all there's the sweat test. This can be done in two ways. The simplest method, the one I followed, is to simply answer the short (one-minute) online questionnaire that asks about the way you sweat. There are no intrusive questions and they are based on your own interpretation of your sweat loss. Once completed the results are used by the PH team to decide on a programme of their products to keep you hydrated and on top of your game during a race or sportive, or during training.

Obviously this depends on your understanding your own levels of perspiration, but if you want a more precise determination it is possible to book an appointment at one of PH's test centres where a simple non-invasive, no-exercise-required test is carried out on your arm. A video on the PH site gives insight into the procedure, and once the test results are analysed you're left with a more accurate insight to your own sweat levels.

As stated previously, I did the short online test and PH came back with a recommended programme, a hydration strategy and an introductory offer price on my first suggested range of products. What's to lose? 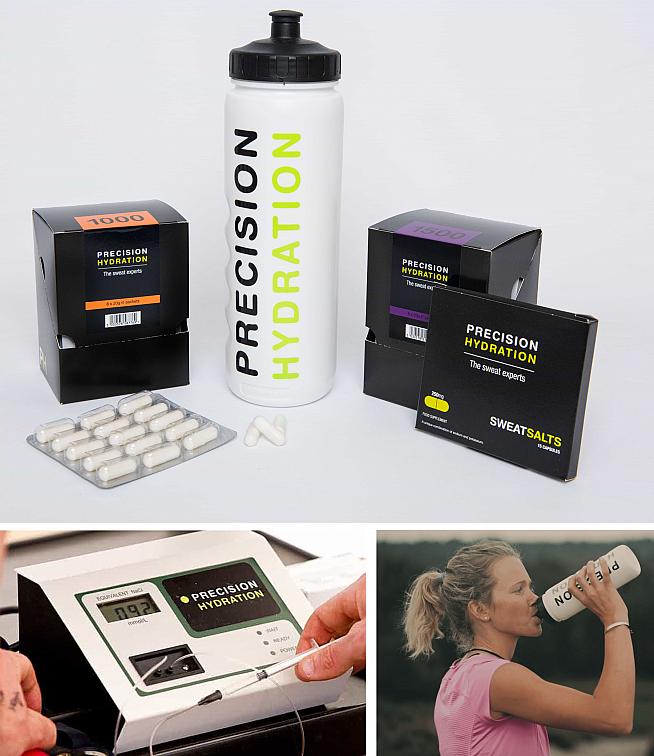 Precision Hydration offer a range of products that can be tailored to meet your hydration needs.

The drink mixes can be bought in powder or effervescent tablet form and the most important ingredient is Sodium Citrate, along with other minerals that our bodies give up when we sweat and therefore need to be replaced.

In my case the suggested programme was based around the PH 1500, 1000 and 500 drinks sachets together with SweatSalt capsules. In a nutshell the idea was that the night before a sportive (other events are available), I should drink a sachet of the 1500 mixed with 500ml of water, and then the same again the following morning, finishing about 45 minutes before the start time. Depending on the expected ride time, my first couple of bottles should be the 1000mg strength drinks and after those have been used just plain water, but taking a couple of the SweatSalt capsules for each 500ml bottle.

Once the ride was completed another 1500 or 1000 bottle could be taken to aid rehydration. On short training rides or turbo sessions, the 500 sachets were all that was required.

If I'm honest I didn't mind the idea of the drink before bedtime, but the idea of downing half a litre first thing prompted visions of me standing cross-legged in the inevitable toilet queues at the start of a sportive, and the thought of salt tablets was a bit alien to say the least.

As with all things new the last place you want to be experimenting is on the day of a sportive, and so I tried some of the drinks sachets out on my normal weekend rides. To be honest I never got to the point where I needed to try the SweatSalt tablets, but that would soon be put to the test at a long distance event I had coming up, the 150-mile Cycle Together Sandringham sportive.

>>> Cycle Together Sandringham: Bob digs deep in the Norfolk badlands >>>

Having started the plan the night before, I made up the morning drink and had that instead of my normal coffee or tea. I actually drank it on the way to the start point, and there was no real need to be crossing my legs but, as the script suggested, my body would take what it needed from the drink and I would/did pee the rest away.

Into the ride I was using the sachets of PH 1000 for hydration and now, having tested the aforementioned Veloforte energy bars, my survival strategy was sorted. Once the bottles had been used up it came to the time to take to the plain water and capsules. It seemed quite strange, this far into an event, drinking plain water instead of a sports drink but it was also very refreshing.

It was a very hot and long day in the saddle and because my drink was almost boiled by the time I got down to the last remaining dregs in my bottle I did buy a fruit juice type drink to see me into the finish line, but other than that it was totally PH that got me through the day.

So how was it for me?

I have tried many different makes of sports drinks during my years of doing sportives and whilst they have all kept me going, to a greater or lesser degree, they all have one thing in common: they are very sweet, stick to your teeth, and before you get the finisher's medal and T-shirt you are a bit fed up of the taste. Or is that just me?

PH drinks in contrast are very refreshing and have a very slight flavour too them. The stronger ones have a hint of lemon and the PH 500 tastes slightly of liquorice to my palate. Irrespective of the taste though it is a very light hint, they're all very refreshing and non-intrusive, very pleasant.

One thing I would like to add at this point is about post-exercise migraines. I gave up running, cycling and gym work about twenty years ago because I was getting headaches after doing any of the above. My GP suggested trying different drugs but I just decided it wasn't worth it and became a couch potato with the obvious consequences. After seeing Sir Brad win the Tour and the Olympics I was determined to get a bike and start again, and even though the post-effort headaches continued, I just enjoyed it so much I carried on and ended each riding day with the required painkillers.

After my rather long ride using the suggested PH products and sticking to their suggested programme throughout the ride, and afterwards, it did not dawn on me until I reached for the painkillers, prior to going to bed, that I hadn't got a headache or any signs of a headache. I took the gamble and didn't take any and was quite relieved the next morning when I woke up, still no headache. What a result. So maybe it was dehydration after all and despite all the concoctions I was drinking some 'magic' ingredient was missing.

It is quite easy to say that Precision Hydration made the difference. It has to be said that the range of products were given a thorough testing on the hottest day that I've ridden this year and the furthest distance I've ever ridden, and I came out with a result that I'd not even contemplated. From now on my choice of hydration strategy for future sportives will be Precision Hydration because it appears to work for me.

Obviously I can only offer a personal account of my own, non-scientific, experience of riding with PH in my bottles, but if you want to know more visit the website www.precisionhydration.com where you'll be able to find out more of the science, do the sweat test and see what the suggested programme is for your level of perspiration. And, should you have any questions that are not covered by the FAQs, I can say from experience that you will likely get a speedy response to any queries from the team at PH.