Chipping Sodbury, a delightful market town on the edge of the Cotswolds, birthplace of J. K. Rowling, scene of many a pub crawl up and down the High Street and also home of the Saddleback Sodbury Sportive. I believe that this was at least the fourth year of the event, although it was the first for me. The sportive is run as a fundraiser by the Rotary Club of Chipping Sodbury. As a result one of its strengths was that there was an army of at least 70 volunteers helping out on the day - Sunday 16th August.

The start and finish for the Sodbury Sportive was at Chipping Sodbury Rugby Club, on the edge of town. I was waved through by several marshals to the large parking area on the grass around the pitch. Registration was from 7am and things were in full flow when I rocked up about half an hour later. The rugby clubhouse was the base for free hot drinks, showers and changing areas. There were also loads of garden chairs and a long line of bike racks for those who wished to socialise before the off. A nice touch were several bicycles painted yellow, as is usually seen around a typical Tour de France stage. Other similar bikes were located around the course, and I even spied a yellow unicycle in the clubhouse. 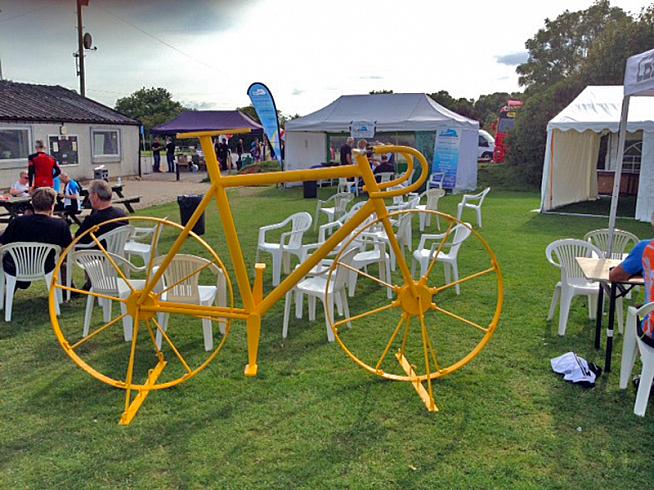 After my Etape du Tour escapade I hadn't been on the bike for four weeks, but I took a deep breath and signed up for the 100 mile route ahead of the 30 and 60 mile options. There were 878 riders registered in advance, and I imagine more on the day probably pushed it up towards four figures.

The two longer rides started between 8-9am and I joined the start queue which was snaking a little way back. Five minutes later I was out of the queue and back to the car as I realised I had forgotten to attach my seat bag containing repair tools and inner tubes. Crisis averted and it was back to the queue. It took about 10 minutes to work my way into one of the two adjacent front pens. This was quite a good idea as both pens could be briefed simultaneously and were then released within a few minutes of each other.

Bikes chatting amongst themselves ahead of the ride.

The start location meant it was straight into the surrounding countryside and the diet of villages and rural landscapes that was to be a constant during the ride. There was a total of 1900 metres of climbing and almost all of it came in the first sixty miles of the ride. Every major incline was given a name and marked with a sign showing total length, average gradient, maximum gradient and total ascent. The signs weren't big enough to take in all of the information as you rode past, but the same details were on the event website for the benefit of those riders who like a bit of homework. So it was that after an initial jaunt across Sodbury Common the "Hawkesbury Howler", "Alderley Grunt" and "Tresham Tester" were all encountered in the first eight miles. The worst of these was the "Alderley Grunt" with an average 11% gradient going to a maximum of 20%. Thankfully, it was a short, sharp shock rather than a sustained climb.

The 60 and 100 mile route split came early at the 12 mile marker. Just before the first food stop I encountered a load of cyclists on the 30 mile route which had started later that morning. The 100 and 30 mile courses only overlapped for a short distance but there seemed to be a lot of families out enjoying the perfect cycling weather. The 30 mile route diverted off prior to the first food stop. This arrived 32 miles in at a pub in Little Sommerford. The ride had been heading east since the start so we were across the border into Wiltshire. The number of volunteers was matched by the number of wasps trying to get to the food. You couldn't blame the wasps either because there was all sorts of food - bananas, flapjacks, cakes, jelly babies in little bags, and much more. Tea and coffee was also on tap along with water and energy drinks. The pub toilets were also at our disposal. There was a timing checkpoint to go through and then it was off again. 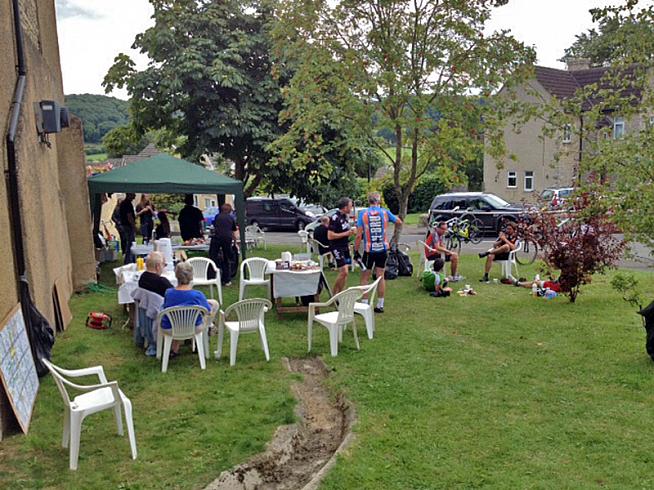 Wasps and riders tuck in at the feed stop.

The route turned north and then west and for the next 20 miles was fairly flat as it headed back into Gloucestershire. There were marshals posted at busy junctions and other key points but I only saw a handful of other riders on this section. I think it was around Minchinhampton I encountered loads of cattle, presumably grazing on common land around and, occasionally, on the road. Shortly after that and a descent into Nailsworth and the main climbs of the day came into view. The warm-up was the "Nailsworth Nailer", 1.6 miles with an average gradient of 5%. Not too bad, except my bike had decided that it didn't want to shift into bottom gear. Eventually I gave up and settled into a higher gear and made it up and then past Forest Green Rovers' football ground.

The main course was to come at 62 miles. No fictitious name for this one, it was Frocester Hill, which the organisers stated was featured in "100 Best Cycling Climbs" (although it was shown as number 104). Again 1.6 miles, but this time a sharper 8% average gradient. I've been on steeper climbs, but after a month off the bike and a previously mainly flat ride, this was sufficient challenge especially without my "go-to" bottom gear. The climb was on a main road but twisted up and round the hill so it was hard to see when it would end. Eventually, mission was accomplished and the second feed station at another pub in Uley came into sight a couple of miles later. The 60 mile route bypassed Frocester Hill and joined back up just before the food stop.

The same quality and array of food was on offer here, along with garden chairs so you could relax whilst recovering. Thankfully, there was also a mechanic on site. He was just catching up on the Sunday papers after dealing with the 60 mile riders but didn't seem to mind my interruption. The problem was fixed in short order and I was back on the road knowing all the major climbing had been completed. The last part of the ride headed south close to the banks of the River Severn, an area I know from previous experience to be almost pan flat. The event website had flagged up several Strava challenge sections along the route, which I signed up to. The start and end of these segments was signposted along the way and most incorporated the major climbs. However, there was one section on the flat for those who wanted to blast out a sprint.

The final food station was in the grounds of a school in Thornbury at the 92 mile point. The route was heading back east towards Chipping Sodbury for this last stretch. I managed to hang on to the coat tails of a couple of other riders for a (in my mind) grandstand finish at around eight hours. The scene at the finish line was a chorus of about 20 cowbells being rung every time another rider completed the course. I was then straight in for the free hot pasty and drink. The bar was also open for those looking to top up fluid levels, and a fashionable black and red t-shirt was handed to every rider. Free 20-minute yoga sessions were also available on the half hour between 1.30-4.30pm to aid stretching and recovery, but I was too late to get involved.

The Saddleback Sodbury sportive has some great individual touches, such as the climb notices, yellow signs and inclusion of Strava segments. There has obviously been a lot of thought and effort put in, and I imagine it has developed over the years. There are more sadistic sportives out there, but this one had enough climbing to keep things interesting and is one I would definitely return to in the future.