It was great to see another sportive in our area, and with the dark clouds of the Covid period beginning to clear my cycling buddy, Paul, and I signed up for the Alzheimer's UK Cambridgeshire Classic organised by UK Cycling Events.

I had previously cycled most of the route under the guise of Wiggle's 'No Excuses' series of sportives, but this time there were some subtle changes to add a bit of a difference to the experience.

As always, the organisers catered for all levels and offered three distances with a few climbs to add a bit of spice to the occasion. 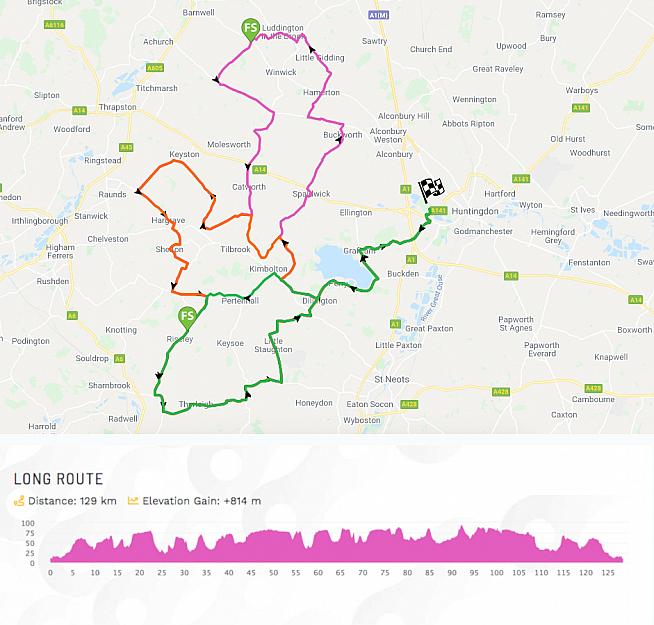 Course and profile for the Cambridgeshire Classic sportive - long route.

Our distance of choice was the long route, so it was great to see that the day dawned with a dry sunny-ish weather forecast, although it might have been just a tad better if UKCE could have turned the wind down a little.

It really was like pre-pandemic days with the spacious car park at Huntingdon racecourse filling up quickly, and riders prepping their bikes ready for the day ahead.

Registration was straightforward and a simple case of identifying yourself on the spreadsheet, picking up your ride number, cable ties and the all-important timing sticker for the side of your helmet. 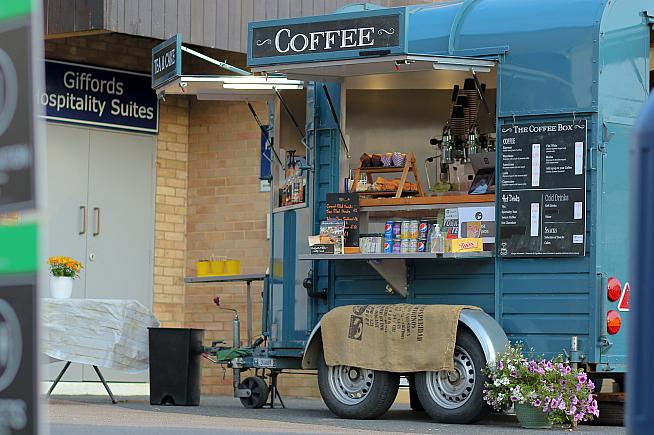 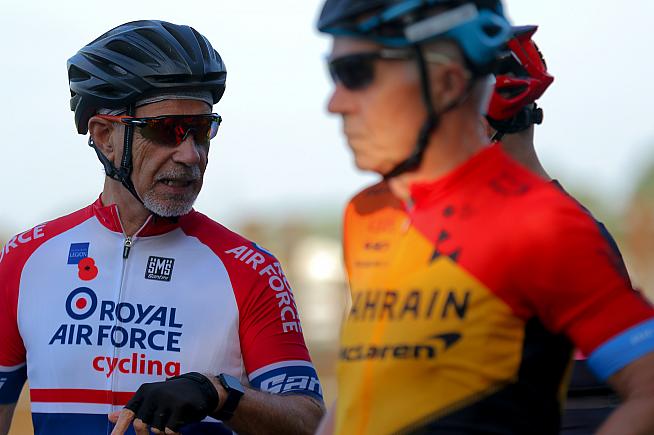 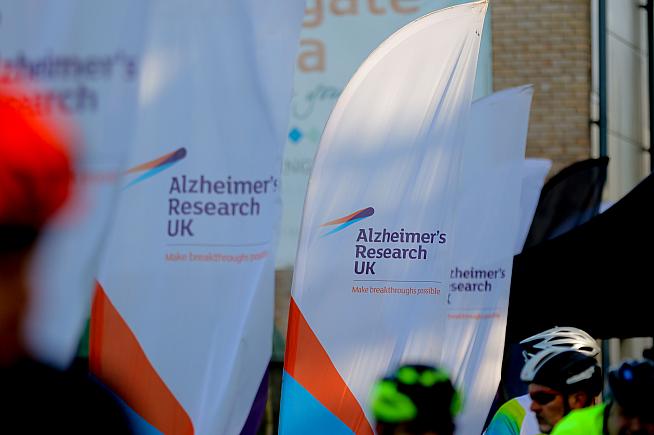 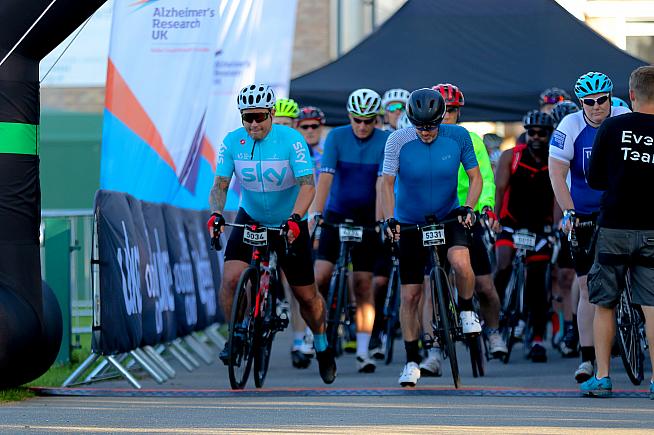 Once your bike was prepped, checked and adorned with the ride number it was time for the final toilet visit and assembling at the start point.

Volunteers recorded starters' numbers, and after the normal brief we were waved off with a blessing - 'have a good ride' - and it was game on.

It's only a few hundred yards from the start gate before the first climb; well, a ramp up to the roundabout over the A14, which helps wake the legs up a little. The roundabout takes you straight into the picturesque village of Brampton with its speed bumps to calm down the vehicular traffic.

Unfortunately, these bumps took out my rear light. I'd got the See.Sense Ace rear light on the bag clip happily flashing away until the clip decided to depart the bag. Fortunately, one of the riders behind me, bizarrely, managed to catch the light as it bounced back up off the road but the clip had disappeared.

The light was still flashing away but I didn't want to spend too much time searching for the clip, I'm sure I'll be able to get a replacement from the guys at See.Sense. So, with light in back pocket, it was on with the ride.

Out of Brampton and alongside Grafham Water the wind was almost head on, so it gave us a little hope that we could grab some tailwind on the homeward part of the route.

The first course split was also the first change in the course that I'd used before. It led us down a quiet road with the almost normal cracks and potholes, with plenty of riders pointing down to the more awkward features to avoid.

Despite the previous comments on the wind of the day it wasn't too disruptive, although it did make us work a little harder at times. 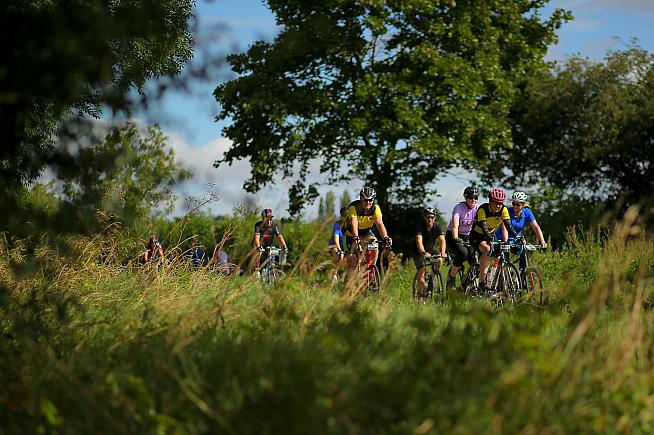 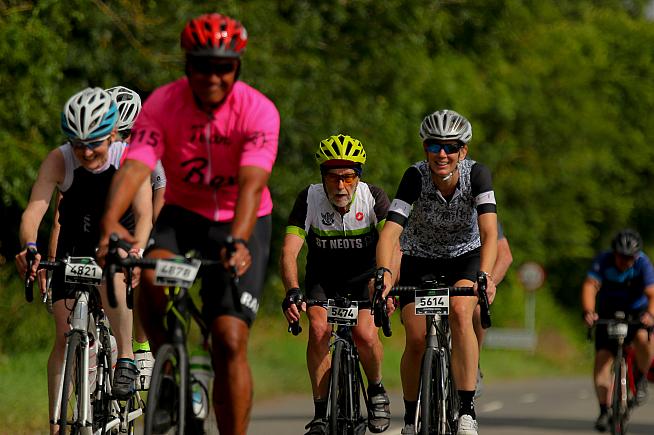 Before too long the route became familiar once again, particularly as we pedalled past Hammerton Zoo Park and on to a series of ascents and associated descents once over the top.

Previous knowledge came in handy because there were some tight turns at the bottom of some of the descents which, in the past, have caught some riders out and it's never fun to see riders off their bikes after overcooking a bend and thereby spoiling their day.

No such problems today though, and it was fairly plain up/down wind battles to the first feed station at the village hall in Thurning. 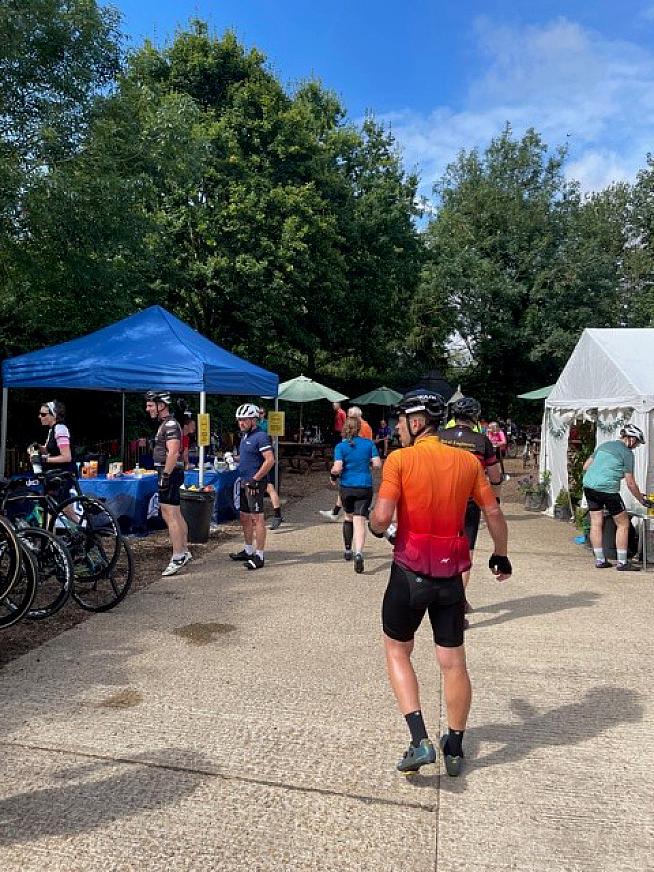 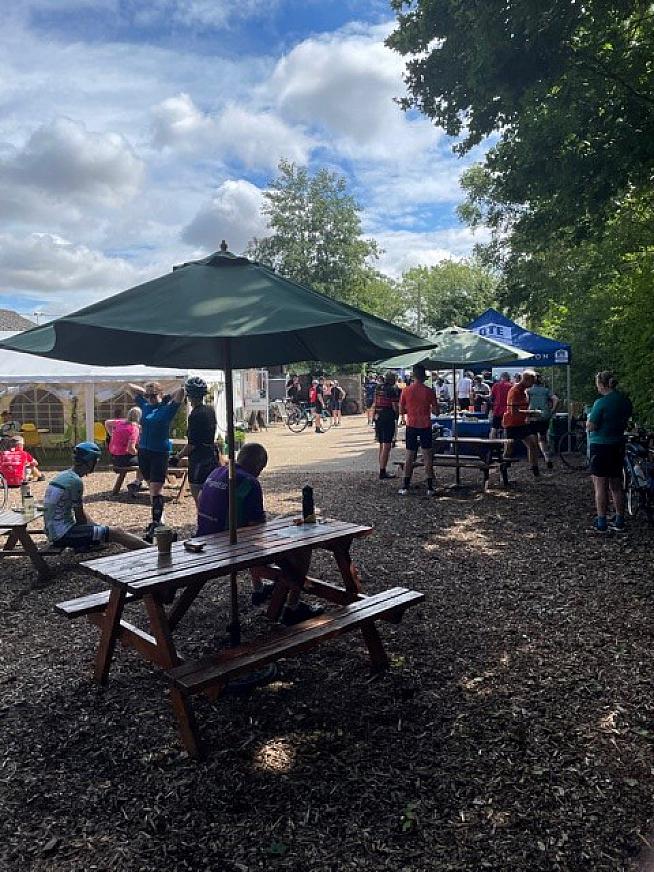 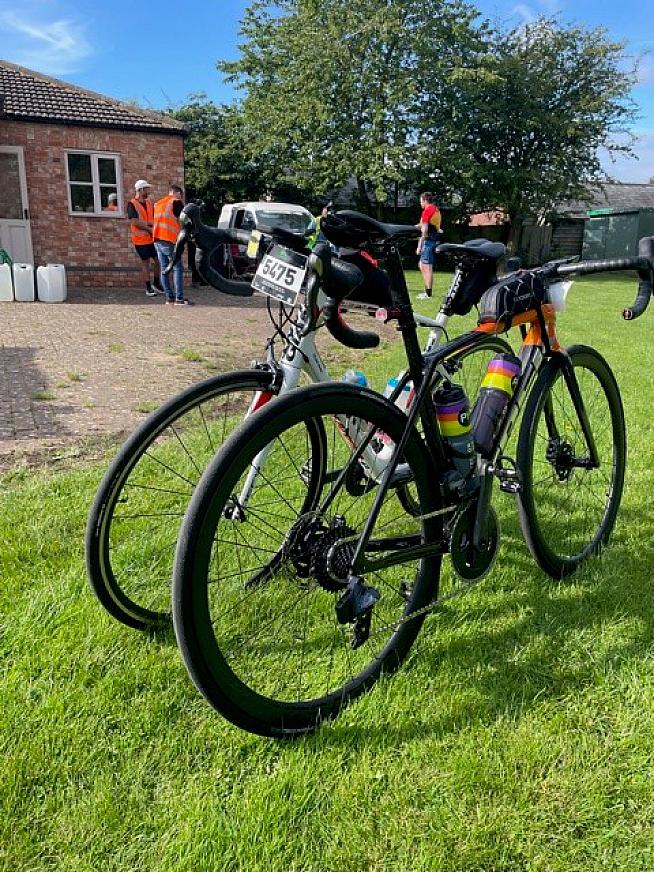 Plenty of goodies were available with the sports nutrition and hydration supplied by OTE, products I'd never tried before.

As always, we moved on fairly quickly to try and avoid the start again leg pain, to no avail, but it never lasts long so a few pedal strokes later it's business as usual.

Although we'd now entered into another change to previous routing, I was familiar with where we'd been taken especially as we arrived at the start of the climb at Catworth. I would list this as a fair climb, although I'm sure the Marmotte-ians amongst you would laugh at such a description, and I was quite pleased with the way I 'flew' up the climb simply because on previous rides up there it was quite a slog.

The wind, again, required some extra effort but Paul and I took the option of drafting behind a small line of traffic behind two rather large tractors that were leading the 'bunch'.

It's sod's law that once you've jumped on the back of something like this that a turn in the road puts the wind behind you and negates the extra benefits of such an attempted draft. A couple of turns in the road later and we were on the benefit side of the draft and although one tractor carried on down the main road the larger of the two tractors and the following cars turned off onto the same road as us: bonus, or so we thought.

This behemoth of a tractor got caught behind two cyclists that were on the sportive and, due to its size and the twisty roads ahead, could not find a decent place to overtake. Traffic, both motor vehicles and cyclists, quickly built up and patience was soon dwindling amongst all of the followers. 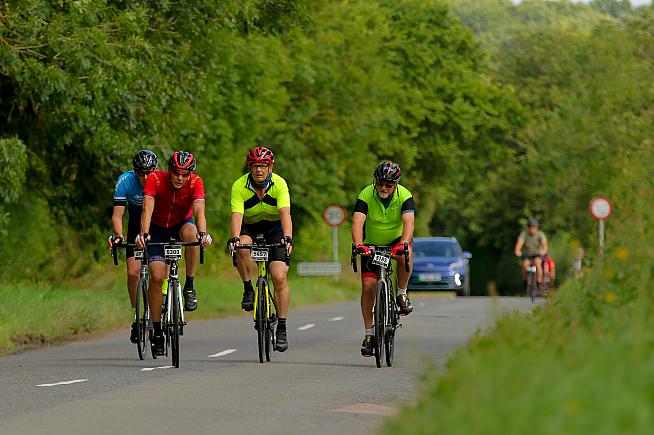 It appeared that the 'leading' cyclists were either unaware of the traffic build-up behind them, didn't care about the traffic behind them or were determined to get their own back on every tractor driver that's ever held them up in the past. It was quite a few miles, and a fair bit of time, before the tractor was free to overtake and then it was like floodgates opening with cars, vans and cyclists racing past the two previous leaders, ironically both wearing yellow jerseys.

It wasn't too long after this episode that we both commented how warm it was, whilst unzipping our jerseys, and we were passed by a guy wearing tracksuit bottoms, what appeared to be work shoes and a full length jacket, wow!

I had to take another drink to try and cool myself down a bit more. I'm not for a minute suggesting he was incorrectly dressed, far from it - after all, sportives are all about bringing cycling challenges to the masses, no matter what bike brand/style you ride, what brand of clothing you wear or what your purpose of joining the ride.

Such events should be totally inclusive in every sense of the word. But as I watched this guy riding off in to the distance, I wondered how he was coping with the warmth and whether he was sweating as much as me. Chapeau, whoever you are.

It didn't seem too long before we reached the second and final feed station on our route.

It was quite obvious that riders were indeed partaking because the aroma of bacon butties was prominent and the tables that were available to us all were taken up by those that were tucking in or waiting for their orders. 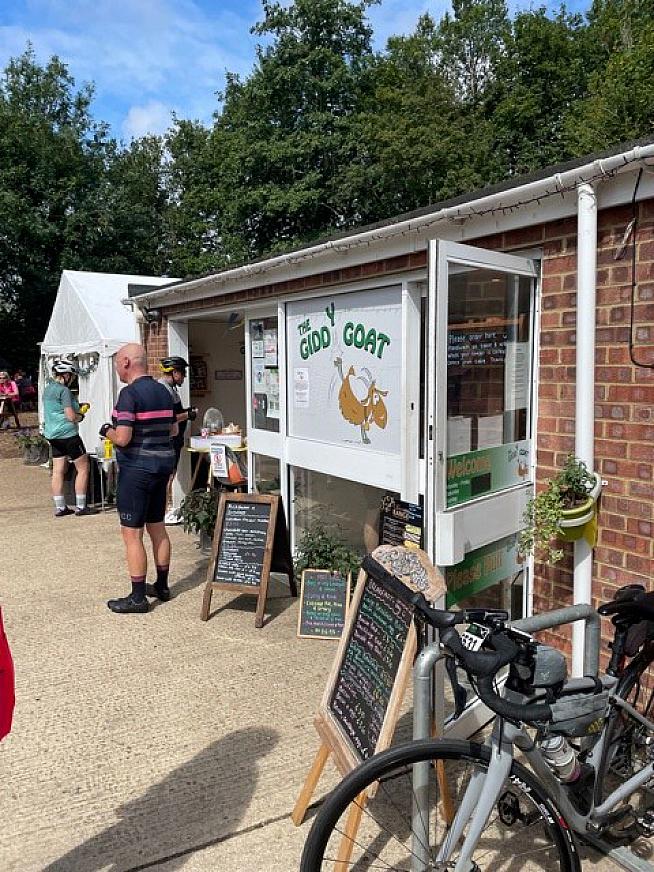 Despite a small queue for the water/hydration drinks Paul and I were sticking to our plan of getting in and out quickly and were soon on our way again.

The final leg threw a few climbs at us, but before long we turned onto the road alongside Grafham Water taking us back to Brampton. Although there was a bit of a tailwind, it wasn't the rocket booster we were hoping for.

Nevertheless, it was a great day out on the bike. A great rolling route with enough climbs to work the legs, heart and lungs with plenty of riders enjoying a well organised event. At the finish there was a medal along with a free can of beer and coffee to relax with in the post ride area with everyone recounting their experiences of the day. 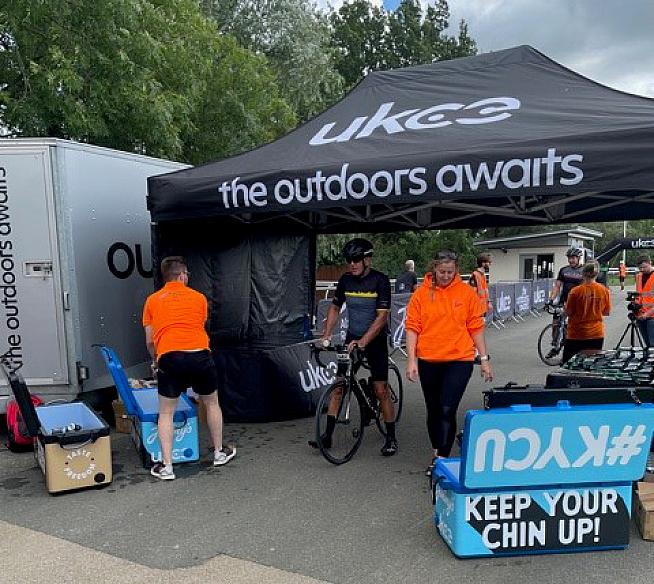 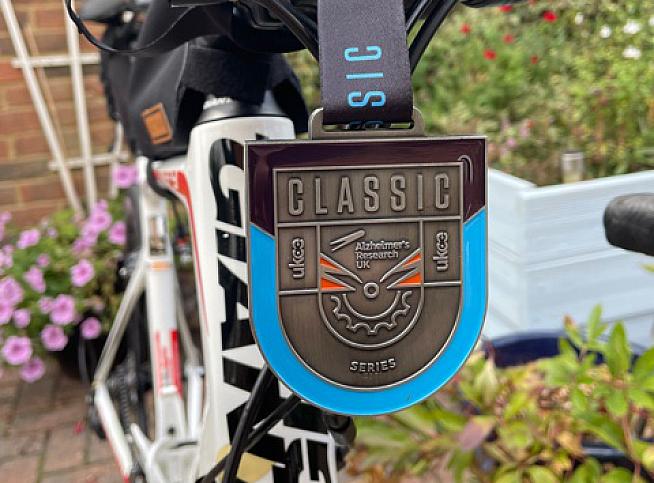 UKCE have got the organisation of their events off to a tee. Loads of signage, good routing and all supported by the volunteers to make it so much easier for us to enjoy our day.