King of the West Wing: Eoghan tucks into the King of the Downs sportive

Evans Cycles is well known for their Ride-It events up and down the country. The crown jewel in their calendar may be the King of the Downs. Run from their headquarters near Gatwick Airport, Evans have created a challenging number of routes that are a feast for the eyes and a beast for the legs.

Clearly, they're all cyclists too - so there was a lot of thought and consideration given to the details. 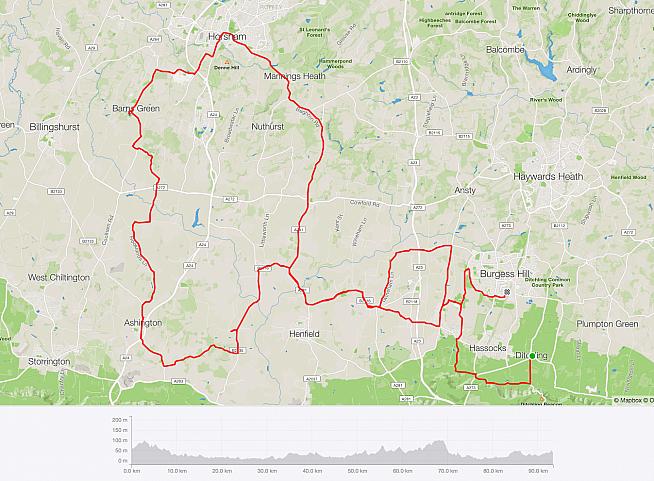 The west loop on the King of the Downs sportive still packs in plenty of climbs.

Evans Cycles' now well-established sportive, The King of The Downs, challenges riders with a true test of cycling endurance. A choice of three challenging routes that wind their way through the Surrey Hills, the North Downs, Ashdown Forest and Kent provides a challenge for every level of cyclist:

King of the Downs is becoming a staple in the cycling calendar amongst the clubs I cycle with in Sussex, not only for the longer route but also for the challenging climbs throughout - 10 featured climbs! This year, though, there were only four of us available to take it on together.

We met at Evans' head offices - the start/ finish point - in Crawley, West Sussex. There were a fair number of cyclists out - I think event registration goes into the thousands. So, there was a definite buzz in the air and great atmosphere. Must say, parking was very well organised and easy.

Registration was very easy to move through too, with a few goodies provided by sponsor High 5. There was also a free breakfast on-site. Looking down the barrel of another century, this was a good shout for Evans to have organised. For the efficient, last-minute Larry, there were also mechanics in abundance. So, had anyone noticed a fault with their bike, they could have left their bike with a mechanic and gone off for breakfast. Makes me wish I could do it all over again! 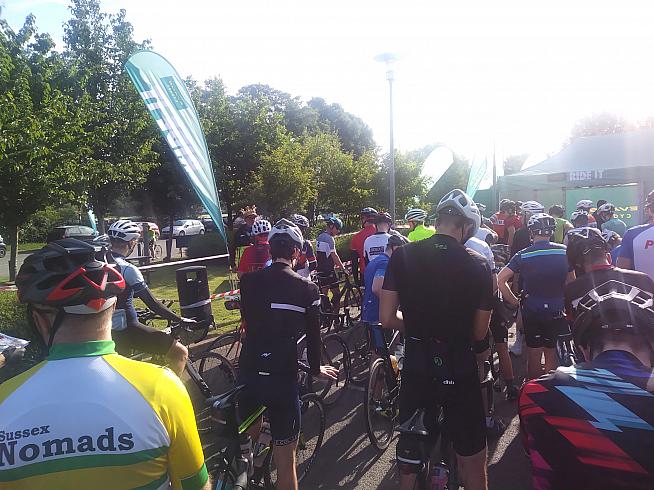 Riders muster for the start near Evans headquarters.

The route is a figure of eight leaving from Evans' headquarters doing a 50-odd mile westernly loop. The halfway point is back to Evans before another 50-odd mile easternly loop.

The West Loop (aka the 'easy' loop)

The west loop is considered the easier of the two loops (Evans' words, not mine!!!). The route takes in the first five climbs including Leith Hill, Combe Lane and Box Hill.

The four of us leisurely rolled off the start line following the signs around the first loop. The weather the night before was quite wet and, although the morning was dry enough and drying, we weren't too gung-ho to lay down too quick a pace.

The route was really well marked out - a special kudos goes out to Evans' route markers. They had marked the route as usual. But, because of the excess rain the night before they had slipped out the morning of the ride and marked places in the road that had become hazardous. Definite points to the Evans team for the above-and-beyond thoughts there. And, they were needed.

Across the morning we traversed the Surrey Hills and the North Downs and came across some pretty rubbish road conditions. At the top of a hill down a narrow lane, rain had washed someone's decorative garden stones into the road. Going down in a small group, there were pings as stones ricochetted off someone's wheel followed by someone calling 'puncture'. One of our crew had two punctures in about 10 minutes.

We proceeded at a reasonable zone 2 pace, which gave a good chance to have a look about. This was my first time to do the King of the Downs and one of the few times going through the Surrey Hills. It was a treat. Leith Hill sits amongst some wonderful ancient woodlands. The mass of the trees as we huffed and puffed up the hill was spectacular to see. The south has many wooded areas, but it was clear to see, Leith Hill is pretty ancient.

Road conditions, bad luck, getting lost and not being evenly matched, broke up the group. As we approached Box Hill, there were only two of us left. We decided not to wait, but to pick up the pace, get up Box Hill and have the drinks and cakes in for when the other two chaps caught us up.

Atop Box Hill was a wondrous scene. The sun was out, shining and radiating with heat, there were reams of cyclists with just as many bikes (imagine that) everywhere. We procured the coffees and cakes and even managed to find a table!

Regrouped, fuelled and ready, we were off to hit the half-way point and start in on the second loop - the tougher of the two. 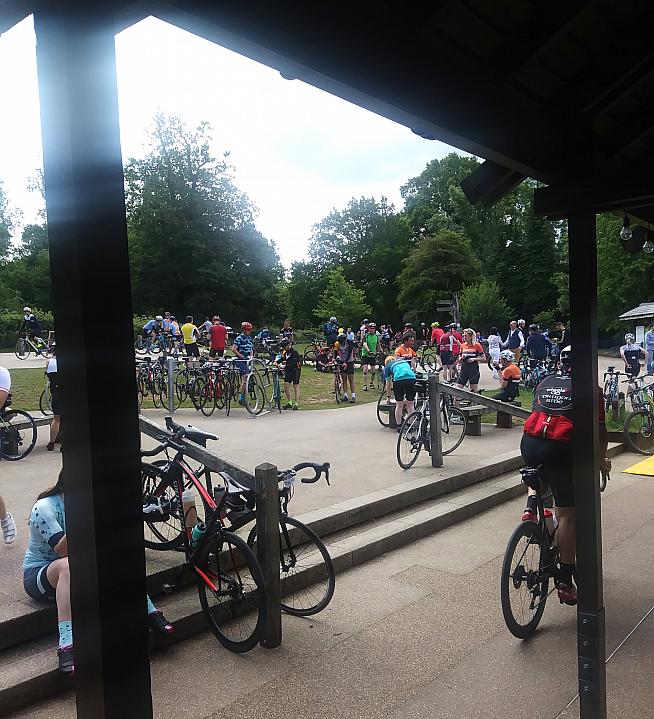 Don't spend too long at the feed stop - the broom wagon won't wait!

It's always interesting to find out why others are riding an event. I was riding King of the Downs not only for its challenge, but the next weekend I was off doing a 200 mile event and three weeks from the event I was heading north for a 1,000 mile spin.

I went off the front for some reason and caught up with some chap riding a time trial bike. While waiting for the others to catch up, the two of us had a chat. He was riding a TT bike because he was doing an Ironman in Wales later in the year and the last time he did it, he noticed the terrain was similar to King of the Downs and a lot of other people had ridden TT bikes. He wanted to build the comfort and familiarity on turf closer to home before pushing the boat out during the Ironman.

Our plans of doing both loops of Evans' King of the Downs were foiled when we arrived at the mid-point and were told the second loop was closed. Initially, it didn't register with me and I thought they had taken a view to close the route because of poor road conditions. It turns out we had missed the cut off! By only 15 minutes! We were told we could shoot off and catch the broom wagon to carry on, but one of our four was already flagging and it just didn't seem fair. We could pick up the pace and drop him or catch onto the broom wagon and be that group that delayed them from going home early.

We decided the copious and free cake that was at risk of being thrown out was not to be wasted and our mission for the day (if we chose to accept it) wasn't to ride the East and West Loop, but to put a sizable dent into reducing cake wastage.

And, so there we were. We left late, rode slowly across the early poor road conditions, got lost, enjoyed Box Hill too long and didn't give any thought to a cut-off time.

So we checked in as having completed the ride, collected the medals and had a bit of lunch while we plotted what to do next. All of us had intended to cycle a century so didn't have anything else to do for the day.

Three of us plotted our own East Loop, going for a bit of extra hill climbing and training. We set off making our way to Ashdown Forest with the aim of arriving at Kidds Hill. As we were cruising along, to our left we startled some deer who started running alongside us off the road for about 100 metres before cutting across the road and disappearing. It was quite a cool experience.

One of the chaps just wasn't feeling it that day and we kept dropping him. So, when he caught up close to Sloop Inn pub (a strategic, premeditated let's-stop-and-wait-here stop) we decided to chuck in Kidds Hill and further cycling and just have a pint.

I brought the chap who didn't have the legs that day home. I had just gotten a new Ribble CGR SL 105 and it was my first long cycle on the bike, so I wanted to keep going. I took in a final loop of the Ditchling Beacon and Devil's Dyke in the South Downs, bringing the day to just past a century. It was a terrific day out that got me familiar and used to riding the new bike and served as good training for the next week.

Evans Cycles' King of the Downs is a great early-mid season challenge to set you up right for the rest of the season. It'll put strength in your legs and remind you what's great about cycling. It takes in some really spectacular scenery (both natural and lovely little villages) and some dastardly hills.

There are few excuses not to do it, and it's one of the most thoughtfully managed events I've been to.