In my experience, the parcours of most 100-mile sportives seem to follow a similar template. Flat and fast out of the gate, followed by some early minor climbing and a feed station. The main climb of the day then comes around 40-50 miles, followed by more flat and maybe a smaller climb at 75 miles. It's then downhill to the finish for the last 10-20 miles.

The Black Rat sportive used to fit loosely within this formula as an achievable century ride early in the season. However, a course change in the last two years has increased the challenge and difficulty of this sportive.

Last year I got caught out by the increased severity of the route. On the back of virtually no cycling whatsoever, I went for the Granfondo 100 mile course as a desperate training measure for some foreign cycling in July 2018. I was expecting the usual fairly high degree of difficulty for the event I have entered for the last five years, but didn't bargain for a much harder course.

Initially the template was conformed to. Flat and fast away from Marlwood School in South Gloucestershire, and over the Old Severn Bridge followed by a warm up climb just past Chepstow racecourse and a feed station into Abergavenny.

Leaving the feed station it was straight onto the main climb of the day, up Gospel Pass. This was the hardest climb the Black Rat has been up. The highest road in Wales. I struggled over the top last year, expecting an easier time for the last half of the course. Wrong! Another short but killer climb followed shortly afterwards. A second feed station but then straight onto more short, sharp climbs with the road defining the term undulating and very little in the way of respite.

I finally realised that the climb towards the end was out of Monmouth and up to Trellech. This is a climb that has been the main focus of other sportives I have completed in the area, but on the Black Rat it was a more an afterthought. A third of the way up last year, around the 85 mile point, I threw in the towel and phoned for the Broom Wagon. I had nothing left with the unrelenting nature of the course highlighting my lack of preparation.

Wind forward twelve months to Sunday 19 May, and I'm again booked for a foreign sportive next month and the Black Rat was part of my preparation. With some trepidation I noted that the Granfondo was exactly the same course as 2018. At least I knew what to expect this time, and I was fitter - although I was still short of time on the bike (mainly due to childcare demands).

An opportunity for redemption, to put to bed the shame of 2018 - or a repeat showing, to once again highlight my over-confidence?

This year there was an opportunity to register between 12-3pm the day before the ride at Marlwood School. As it's my "home" sportive I was glad to do so, in order to save time on the day. Pre-briefing information was on the website along with a registration form that could be completed in advance and handed in on arrival. As a result I was in and out in ten minutes, with a handful of others at sign on.

I received a handlebar number with two cable ties. The number was coloured coded in line with which of the three routes you were signed up for: green for Granfondo, orange for Medio fondo and I think pink for Piccolo fondo. There was also a transponder to be attached to the bike with another cable tie. There were dire warnings of a financial penalty in the pre-read if these were not returned. I saw them attached all over the place on various bikes so I assume that the chips didn't need to be on one side or the other as they appeared to be activated by cycling over timing mats.

There was plenty of parking at the school on the day. The event was open from 7.30am with the two longer routes due off at 8.45am and the shortest route at 9.15am. it might have been my imagination but I thought there were more portable toilets this year, or maybe the queues were just shorter. There wasn't too much in the way of a verbal briefing. That wasn't a negative as there was a lots of information in the online briefing and I just wanted to get going on the day. Riders were set off in short intervals in groups of around 100.

The weather was overcast, threatening to warm up a little into the mid teens but also with the chance of a shower later on. This made it hard to decide on clothing but I opted for knee warmers, long sleeve top, thin gilet and also set off with my wind jacket on. I feel the cold. Within the first ten miles after getting to Chepstow I was sufficiently warm to lose the jacket.

The short gaps between riders starting meant there were big groups as we crossed the bridge. I hadn't been on my road bike too regularly and I spent the first few miles just trying to get the feel back for it. I've never been the best bike handler and my descending is awful, only improved by lots of time in the saddle.

I gradually became more confident on the largely flat first section and up the first real hill which averaged 6-7% for around 3.5km. I was still quite a bit nervous on some of the following descents. I've learnt when I tense up it makes things worse, so I just try and relax and I like to ride away from the gutter. I didn't think my positioning was too bad but one of the female riders who passed me on several descents shouted her annoyance, alleging I was "too far out" or something similar. I didn't agree but kept my counsel and I was feeling quite good at the first feed station in Abergavenny around the 50km mark. 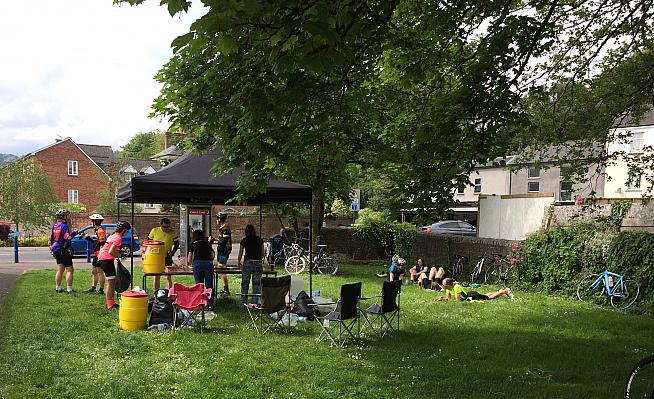 The feed station was situated adjacent to the public toilets. As I stopped another rider claimed "they've run out of water" but this turned out to be fake news as they were just restocking. There were High 5 energy gels, cakes, bananas amongst other items. You had to reach this feed station by 12.30pm to avoid being diverted onto the Medio fondo course. I was well inside that time, I think by around an hour. I knew that the main climb of Gospel Pass was up immediately and I mentioned to latch onto a group of three friends who were travelling around the top end of my natural pace. One of them had suffered a puncture early on but they were enjoying the ride.

I often ride on my own in sportives, but sticking with others over Gospel Pass proved to be a real bonus. As one of the group commented, "It's basically a 500 year old single track to the top". The road doesn't go up too sharply until right at the end, but it is very popular and there is a lot of traffic going both ways. 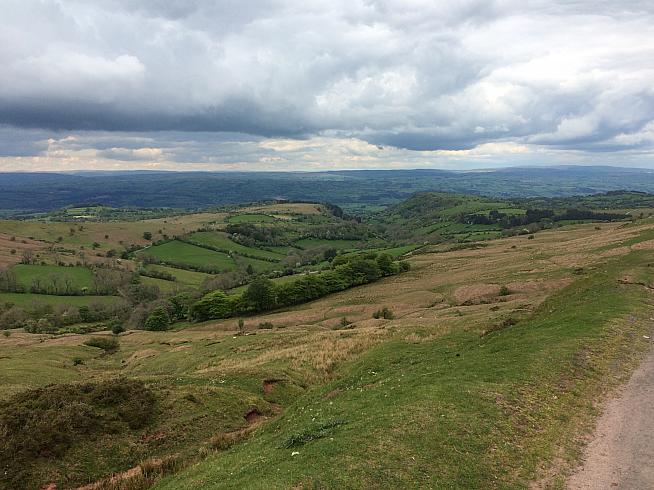 Last year, on my own, this meant I was stopping a lot to let cars go past. This year in a group of four it meant that the cars more frequently stopped for us and even more so when we picked up another four riders for a short time. I was able to find a better rhythm although I did stop and pull myself together on the very steepest section just before the cattle grid towards the top. The road here hits 9% for 500 metres, although it felt worse due to the total climb which was 25km in length. My new friends stopped right at the top. I thanked them as I passed, but kept going so I could take the long descent at my own pace.

I was ready for the sting in the tail this time round as immediately following the descent was 4km of climbing, gradually getting steeper from 6% to 8% to 11%. A real psychological heartbreaker when one thought that with Gospel Pass in the rear view mirror the worst was out of the way. Not the case, and this was barely the halfway point.

The route after Gospel Pass is what really made the Black Rat stand out to me as an exceptional challenge. From there on it was the definition of undulating. Impossible to get into a rhythm with some short, steep climbs just when you wanted a breather. There was a bit of downhill before the second feed station in Longtown. Supplies seemed to be running low and whilst there was plenty of cake and bananas there was nothing in the way of salty snacks that are often craved at this point.

There was another killer steep climb straight out of Longtown. Although I was riding on my own there were around 20 of us going at a similar overall pace. Some quicker on climbs, others on the downhill, others taking short breathers at the roadside so we all kept passing and repassing. It was a morale booster to know there were others who looked like they were finding it tough but achievable.

It was all really a softening up process for the climb out of Monmouth up to Trellech. At the foot of the climb it started to rain and I donned my rain jacket again. It turned out to be not too hard. I ended up stopping on the same corner where I had bailed out last year to lose the jacket again. Another three riders stopped and one appeared to be in tears. I had total empathy as that was exactly how I had felt twelve months ago. I thought she was going to throw in the towel, but to her credit I saw her at the final feed station at the top of the hill. The main part of the climb averages at 6% but there are some other ramps up just when you think it is over. 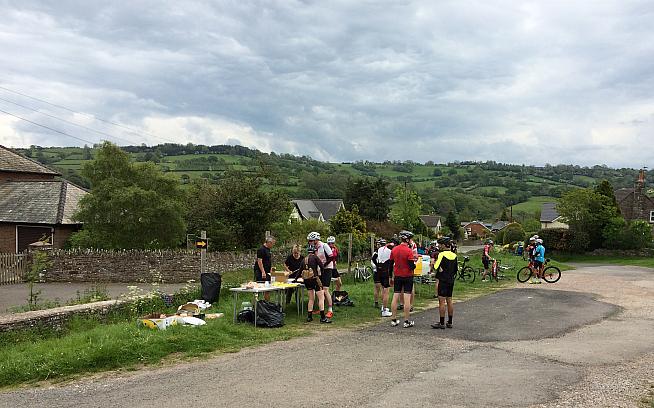 At Trellech feed station everyone looked a bit hollow eyed at the toughness of the route. Thankfully the final 20km was a bit easier, although not solely downhill. Normally a 100 mile ride takes me about eight hours including feeds, but this monster took nine and a half hours to overcome.

At the finish there was a Back Rat mug as a trophy along with cider and a pasty, There were even some gluten-free alternatives, and I plumped for a scotch egg.

Another Black Rat in the bag, but it took me at least a week to fully recover from the experience; 2,700metres of climbing according to my Satnav.

The event is well run, and if you don't fancy Gospel Pass then the 113km Medio fondo and 89km Piccolo fondo take alternative routes back after the Abergavenny feed station. Entry for the two longer routes is £30 before the end of March and £32 thereafter. For the shortest course the prices are £29 and £27. 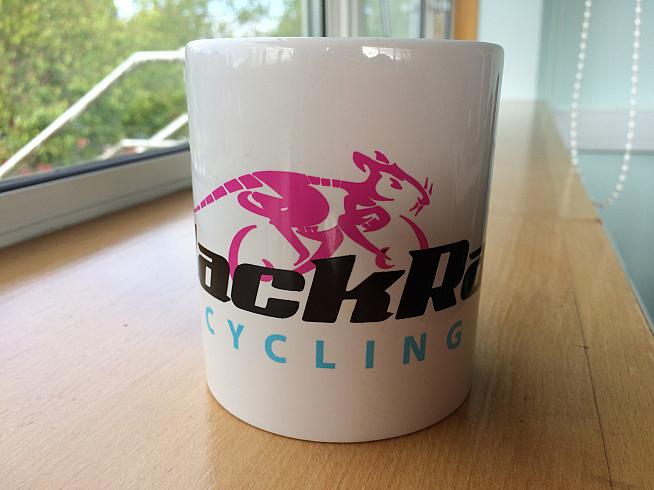 The signs are well placed and I saw the main organiser at every feed station and also encouraging riders just a few kilometres from the finish. He was enquiring about stock levels at the various feed stops, and this was perhaps an area for improvement as the balance wasn't quite there as I touched on earlier. However, that was a minor point that should in no way detract from a fantastic and satisfying day in the saddle with a real sense of achievement. There was a limit of 500 participants and I think it must have been close to reaching that number on this occasion.

Black Rat also run foreign cycling trips during the year, and details of those along with this annual sportive, which has now been running for ten years, can be found on their website at www.blackratcycle.co.uk.