The key moment of the Castles & Cathedrals sportive came before a wheel had even been turned in anger. It essentially boiled down to a clothing decision: my pink Rapha windproof/slightly waterproof thin top layer, or my thick, waterproof, florescent yellow Rapha jacket (I like Rapha)?

I didn't know it at the time, but going for the warmer yellow jacket would make all the difference on the ride.

The Castles & Cathedrals sportive is now in its fifth year. It's based in Cardiff and organised as a fundraiser by the charity Shelter Cymru. I had ridden the event a couple of times previously, most recently in 2014 when a certain Geraint Thomas joined riders on the day, complete in full Team Sky kit.

Thomas was also a ride ambassador in 2016, but there have been a few changes since - not only for G, who is of course now a Tour de France winner, but also, it appears, for the Castles & Cathedrals sportive. In its previous incarnations there had been two possible start points, one in Cardiff and one in Brecon. You could choose to ride from one to the other for the shorter route, or complete a loop for the longer route. I'm not sure when it changed, but there was one start point this year at the private Cathedral School in Llanduff, Cardiff. 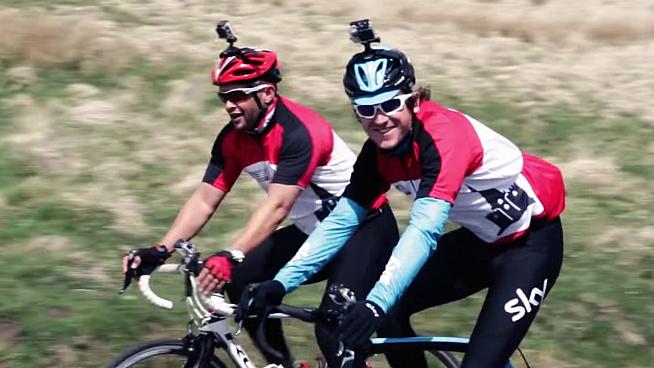 Geraint Thomas surveying the route back in 2016 - 'before he was famous'.

The pre-race briefing email stated that there were some free parking places at the school and further spaces for 50p for the day at the University just round the corner. I believe the maximum capacity for the event was 400.

My understanding is that 260 people registered in advance with around 180 actually crossing the start line - the remainder casualties, presumably, of the weather on the day. I arrived at 7.30am and there were still places remaining in the Cathedral School car park. 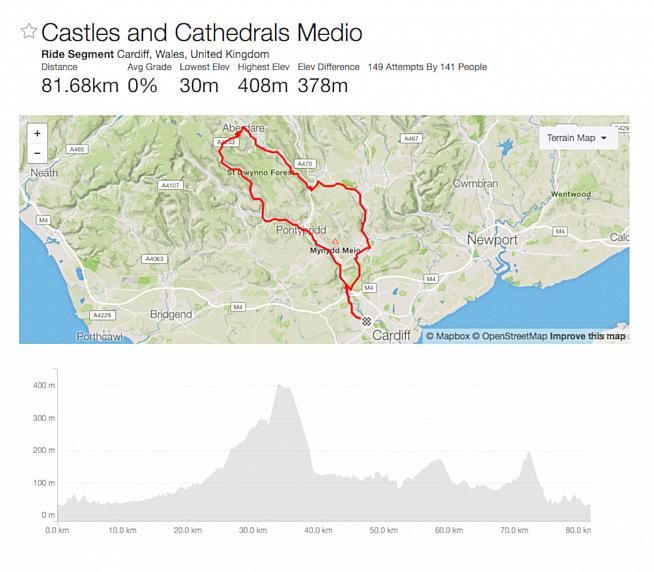 The Medio route with Maerdy Mountain sticking out like a sore thumb.

I had been flip-flopping between whether to ride the Grande or Medio. A lack of time in the saddle made the Medio the realistic option. However, the Grande route was the only one that went through the Brecon Beacons National Park, which was always the highlight of the ride for me.

After a glorious summer of riding sportives in hot and dry temperatures the forecast for this October-fest included rain, particularly in the morning. Albeit the rain didn't look like it would be particularly hard. My enthusiasm for the Grande had abated a little on the drive over the Severn Bridge on the morning as the forecast proved correct. However, it was still in the balance until I arrived at registration. It then became clear that the Grande route had been cancelled due to flooding so the decision was made for me - Medio it was.

Amazingly there was no queue at all for the two or three toilets. A lot of people were already dressed and ready to roll, many of them buying coffee and other hot drinks from a converted horsebox outside the school. I retreated to the car to get the bike and myself ready. The bike was easy, handlebar numbers and some cable ties. My own clobber gave more pause for thought. I didn't want to wear too much only for the rain to clear up later leaving me with too many layers. On the other hand it was cold and wet this moment in time.

I looked around at the other riders. A lot were in bib shorts and fingerless gloves, maybe with a thin waterproof top layer. From experience I knew that I feel the cold more than most so I usually go for more rather than less clothing. In the end I went for full length leggings, thick waterproof jacket, full finger waterproof gloves and cap. This proved to be a master stroke as the event unfolded, although with hindsight I should have gone for beanie hat rather than cap (both with helmet on top of course).

In my faffing around I then missed the outdoor briefing with one more visit to the toilet. I believe that it was kept mercifully short as everyone was getting cold stood around. The ride then set off as one.

There was mechanical support and the start of the event and safety and medi-bike riders out on the course. I saw at least one of these produce a pump from his motorbike to help one of the riders. The route was well marked with black arrows against a yellow background, and there was a photographer strategically positioned at one point on the course. I'm not sure how he stayed warm.

The Medio route was different to a lot of other sportives I have ridden in that it never really got out into the rural areas and country roads. That is not to criticise, as in some ways it made for a welcome change. The route went along the valleys and through a lot of the towns on the way. This meant there were always changes in scenery, and also the traffic was pretty light for a Sunday. There was only the odd occasion when there were hold ups due to parked cars creating a single lane.

There was no climbing worthy of the name until around 28km when the road started to go up through the Welsh towns for about 6km. The houses then ended and I was faced with Maerdy Mountain. Average gradient was 8% for 1.65km. It is a very scenic climb with the road going up in front of you until it swings round a right hand bend at the end. In previous years there has been a feed station at the top, but thankfully arrangements were different this year as it would have been too exposed.

The descent down into Aberdare was quite hair-raising in the conditions with several hairpin bends and a long steep straight into the town. There was also the added factor of getting colder and colder due to the lack of pedalling.

The rain came down harder than expected and did not relent until the very last few miles of the ride. I was also colder than expected with an average temperature of 7 degrees centigrade. It never got hotter than 9 degrees and went down as low as 3 degrees according to my Garmin.

This was all brought home to me when I arrived at the first feed station in Aberdare, Bradley's Coffee Shop. There was a small gazebo outside staffed by a couple of volunteers. I grabbed the penultimate flapjack and there were also McCoys crisps, pasties, sausage rolls, jelly babies and bananas. Water was also available. 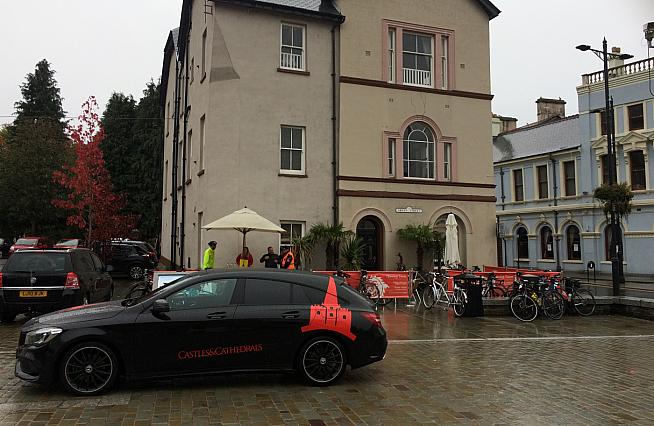 The toilets were in the coffee shop, which was jam-packed with riders trying to stay warm/warm up. It would have been adequate facilities on a dry day but it was too packed at this time. One girl was being treated for the early effects of hypothermia. Another rider was wringing out his socks directly onto the floor. It was clear that those who had ridden in bib shorts and fingerless gloves were suffering. I waited15 minutes to use the one toilet and then steeled myself to get back out on to the road.

Starting again on the return route back to Cardiff was the hardest part of the whole ride. Despite feeling smug that I had picked the right warm clothing I was cold from my sustained period of inactivity in the coffee shop. I had the shivers for 5-10 minutes until I warmed up again from pedalling. Once I had warmed up I felt fine again, as I was quite insulated against the rain as long as I kept going.

The loop back was different to the one out but still incorporated more of the town valleys. There was one more feed station about half way along at a local rugby club. Again this was a gazebo outside the premises with access to the toilets inside. The rugby club was much bigger than the coffee shop and would have been better as the initial feed stop, but it bore the disadvantage of not being in Aberdare.

Due to the cancellation of the Grande route the organisers had offered the option on the day of doing the Medio and then the Piccolo to make an 83-mile course. I would guess that there were not too many takers for this. Anyone who completed this ride can feel well satisfied in doing their bit for the charity, when it would have been easier to take one look out of the window and roll back over in bed.

At the finish I was given a medal and there was also a meal for each rider in the school canteen. This was jacket potato with either beans or tuna and a salad. It was well prepared and gratefully received by myself and everyone else I witnessed. 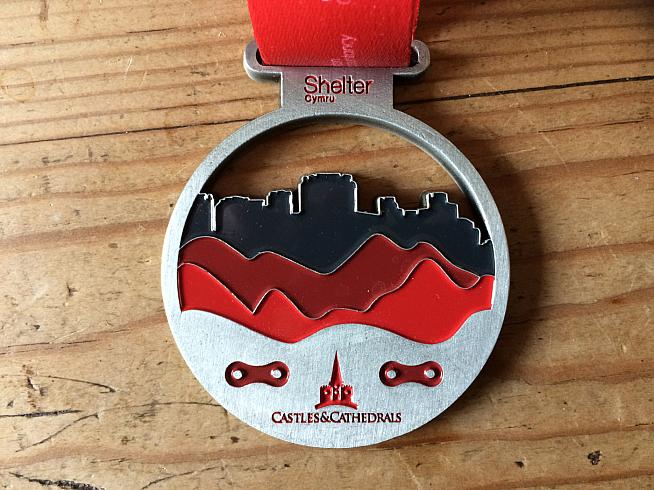 Another trinket for the treasure chest. 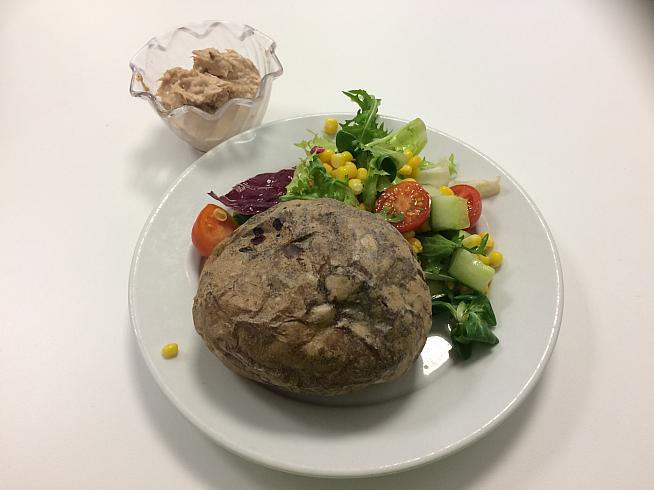 Even the post-ride potatoes wore jackets on a wet and windy day.

I always enjoy this event and the organisers handled things well in light of the conditions. That is always the danger for an October sportive, although in other years I seem to recall it being largely dry. It was just a shame that the Grande route was cancelled as the ride through the Brecon Beacons is what makes it in my view.

It is a bit of a dilemma facing the organisers, as it would be good if the Medio also went through the National Park - but that would then mean finding a start point well outside of Cardiff. Anyway, Castles & Cathedrals is well worth checking out for yourself - it can't be any colder or wetter next year!

Castles & Cathedrals will return in 2019. For details and to enter, visit castlesandcathedrals.org.uk.