The Arlberg Giro: Keith rides a sportive stunner in the Austrian Alps

Cycling's grand tours are littered with iconic alpine climbs, and there are many organised sportives to help the enthusiast tick these 'big beasts' off their bucket list. But to ignore other climbs and events in the Alpine region would be a travesty. The Alps have an abundance of climbs and routes that may lack in racing pedigree, but are just as challenging and beautiful - if not more so - than their more famous counterparts. 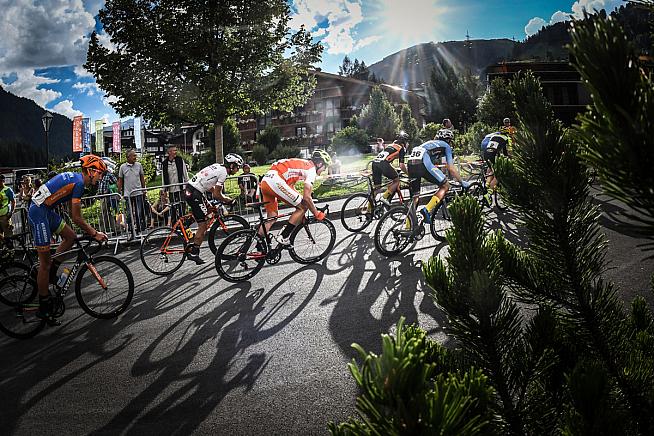 The Arlberg Giro, a 148km Austrian sportive packing in 2,500m of climbing, is one such event deserving of a higher profile among UK cyclists. I had the pleasure of taking part in this year's edition at the end of July.

The Arlberg Giro is open to professionals and amateurs alike. Like many European gran fondos it attracts a competitive crowd keen to win the event, but is also open to cyclists who just hope to get round in a decent time. It is based in the beautiful town of St Anton, nestled among Alpine mountains about an hour west of Innsbruck, and also hosts a professional criterium the evening before the sportive.

The resort of St Anton is world-famous for skiing, but once the snow and skiers have melted away the area is a perfect playground for cycling. Held every year in mid summer, the Arlberg Giro is one of the best organised and friendly events that I have experienced.

Signing on the day before, I was given a token for a pasta party to redeem either that night or after finishing the sportive, along with my bib number, complete with which 'Block' to start in, and best of all, a great event jersey. There are also hotel packages available at reasonable rates.

Inside the signing-on hall there was a screen with all the names of the participants printed on it. A nice touch. Outside, a fleet of official course cars provided by the sponsor, Audi, lined the square. This was definitely the closest I would ever be to entering a full blown race. It felt great.

A comprehensive briefing was held in the evening, complete with video and slide show. I must admit I understood very little, but I think I grasped most of it - keep to the right hand side of the road, take care on the descents and at highlighted danger points. Not sure why it took over 45 minutes to get these messages across; perhaps I did miss other important points! 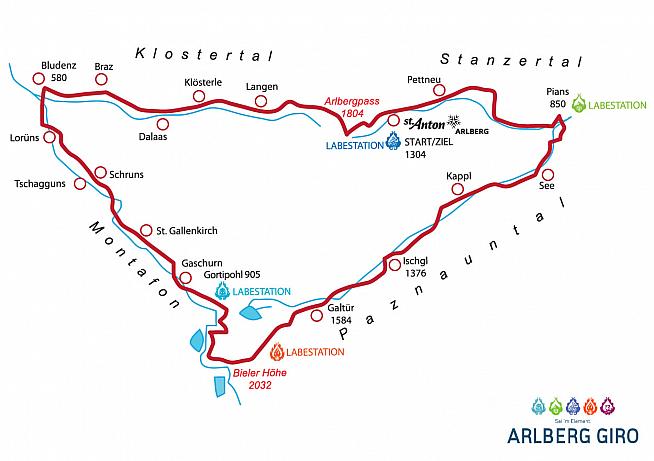 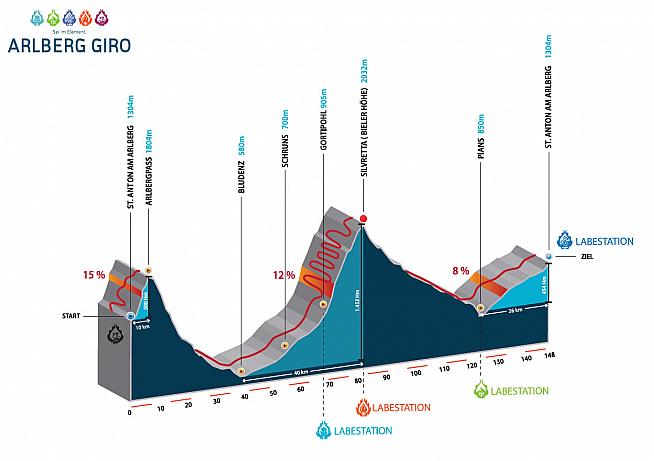 A 40km ascent of the Silvretta Pass forms the centrepiece of the Arlberg Giro.

I had studied the profile of the route long before boarding my flight to Austria. So, on the morning of the ride, it came as no surprise to be climbing almost immediately after passing under the inflated start and finish arch. Neither did it come as a surprise to be passed by participants from all over Europe and beyond as I slowly ground my way up the opening 500m ascent, which included a lung-wrenching 15% ramp.

What was a surprise, and added to the challenge to one of 'life's night owls' was the start time of 6am, an hour earlier than previous editions. This was to pacify the local authorities, who were concerned that this year's closure of the Arlberg Pass tunnel to all vehicular traffic would cause problems with the inevitable sharing of the only alternative route with hundreds of cyclists.

Another surprise was a short, sharp shower as I battled against gravity, legs that were not warmed up and a body that was in shock at being used at such an early hour.

Had I been sensible I would have popped a waterproof in my jersey and not relied on the forecast of rain after 3pm. I might also have donned arm warmers and carried a gilet for the cold downhill descents - again, had I been sensible. 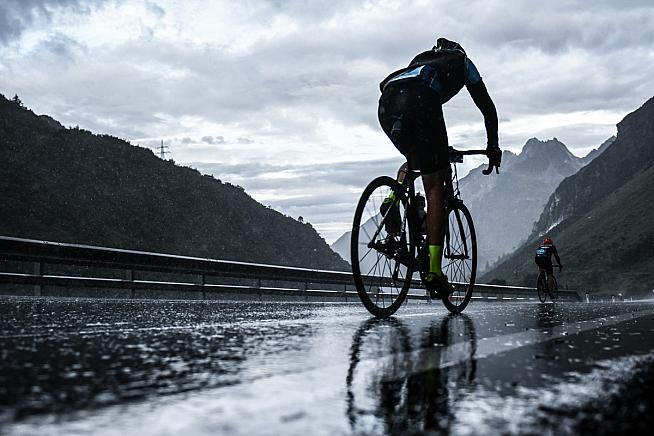 It soon stopped raining and the descent down into the valley was magnificent in its splendour. On dry roads it would have been sheer fun, however, care had to be taken on the wet tarmac. As I shivered and wound my way down to the valley floor in very wet Lycra, I prayed for the sun to appear. A big ask as it was only 7am! I must say all other participants took care too; the faster ones did not put any pressure on cyclists in front, which I was thankful for.

The 30km glorious downhill in wonderful scenery, through the occasional tunnel, and the easy pedalling gave a taste of things to come. But first we had to conquer 1,452 metres (to be precise) of non-stop climbing on the Arlberg Giro's signature climb, the Silvretta.

On the approach to the big climb of the day, I caught up with a small peloton. The cyclists were a mixture of Austrians and Germans. I prepared to use my limited language skills, hastily learnt from the 'Rough Guide Phrasebook of German' I bought at the airport, but was relieved to find that due to the international language of cycling I didn't need it. Along with the hand signs for pot holes and obstruction on the right, the signal to take your turn at the front was in regular use.

Unfortunately, I lost my new teammates after the first and well stocked food stop at the village of Gortipohl, a short distance from the official start of the Silvretta climb.

Refuelled but now cycling alone, I set myself for the climb.

I soon passed through the unmanned barriers, that I presume are in use for when the pass is closed in winter. The first section reminded me of the Alpe d'Huez in that the steepest part of the climb of around 12% is the first to be overcome. The middle section has a fairly steady gradient, allowing you to get into a rhythm. Near the summit it is significantly less steep, apart from a little ramp as you crest over the top. And from bottom to top, stunning scenery. 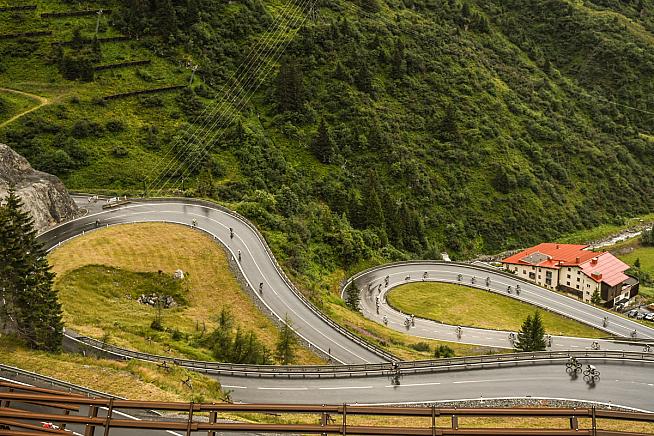 For the more enthusiastic rider there was a 'King and Queen of the Mountain' competition on the Silvretta. At every kilometre there were signs indicating how far to go to the summit. These were a welcome sight towards the end, but on the first few steep slopes about 12km from the summit, I found them quite depressing.

At last, the end of the relentless grind came into sight and I found the energy to increase the pace a little to reach the second refreshment stop overlooking the reservoir, known as the Silvretta Stausee lake.

I was at the highest point of the pass at 2,032m and knew the worst was over. The best part, 40km of downhill to Pians, was about to begin. Luckily my prayers had been answered a couple of hours previously and the temperature had warmed up significantly. Therefore, wearing a gilet was not needed (just as well!).

I zipped up my top and joyously started the long descent. The sweeping bends from the top of the alp eventually led us into the beautiful valley. I whizzed through small towns, each with their own little church that looked to the untrained eye identical to the ones in every other town, past houses adorned with window boxes full of flowers and with mountains as their backdrop. Stunning. 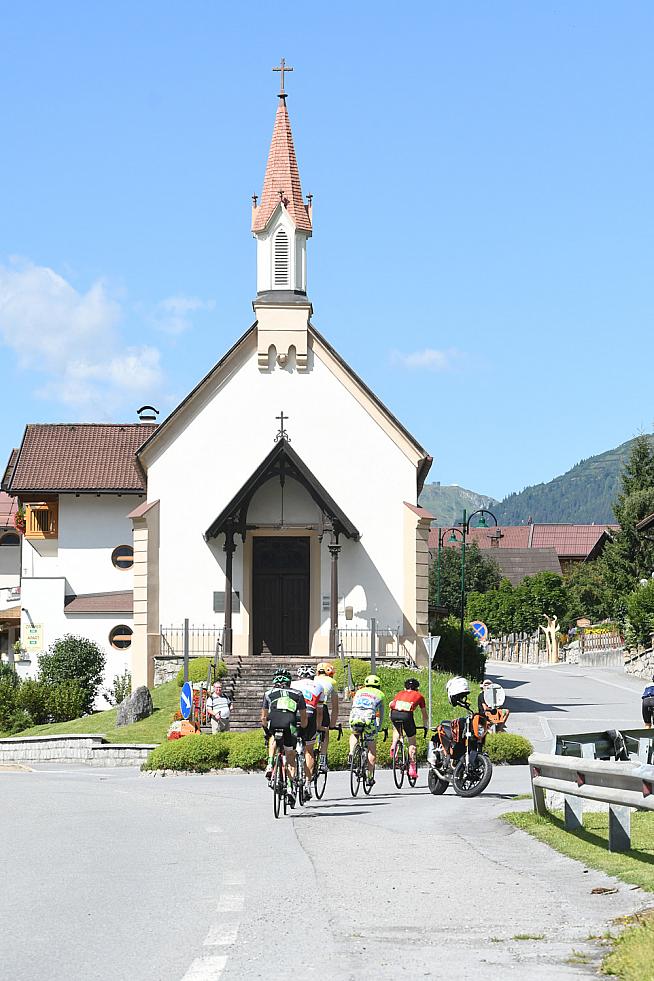 With the road still gently pointing downward, I cycled at speeds I only normally dream of achieving on the flat. For the second time I felt like a professional.

As I approached St Anton and weaved my way through standing traffic that was trying to get through the pinch point the town created, I realised the authorities were probably right and forgave them for the unearthly early start.

I left the main road and was instantly greeted with cheers and applause from bystanders watching the spectacle of fatigued cyclists returning from their endeavours.

For the earlier arrivals - riders that didn't have leisurely breaks at the three food stops, and were faster on the ascents - cheerleaders also greeted them back. For me, I had to be happy with just the commentary informing the small crowd of my return and a little ripple of applause. However, I crossed the line with one of the biggest smiles ever to adorn my face. 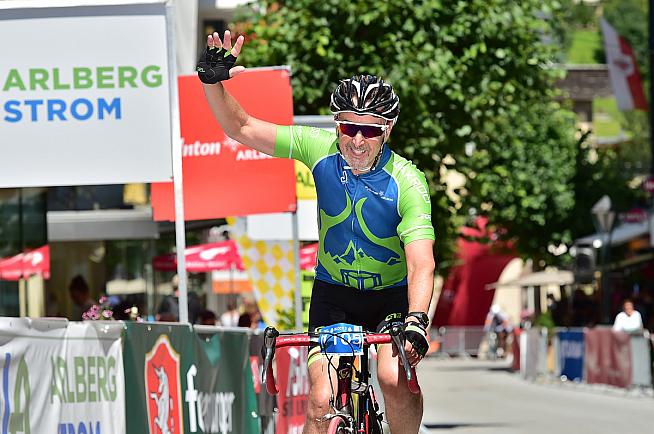 Keiths rolls over the finish line in St Anton.

I would love to go back to explore the area and also to attack the course to improve my time. I must admit, I did take my time to look around and to take photos. Well, Austria is a long way to go just to see the wheel or the tarmac in front of you.

And that is not from the 'Book of Cycling Excuses'. Honest.

The Arlberg Giro takes place on 29 July 2018; entries are now open, with an early bird rate of €44 until 31 December. For details and to book your place, visit www.arlberg-giro.com.