Take it to the (Severn) bridge: Paul revisits the Black Rat Sportive

"I've left my helmet at home in Bristol. My wife is on her way with our three-year-old and one-year-old to drop it off..."

Looks of sympathy were exchanged by several of us in the queue for the outside toilet at Marlwood School. The sympathy should probably have been with the harassed mother of two, who now faced an unscheduled one hour Sunday morning round trip.

However, my immediate empathy lay with the cyclist and the needless squandering of carefully accumulated brownie points over such a simple oversight. I knew from the recent addition to my own family that any increase in children means a corresponding decrease in cycling opportunities. That fact mixed with an early season torn cartilage has resulted in fitness levels hitting rock bottom. All of which is a long way of saying that I was signed up to the Black Rat Piccolofondo, rather than the Granfondo of the previous three years. 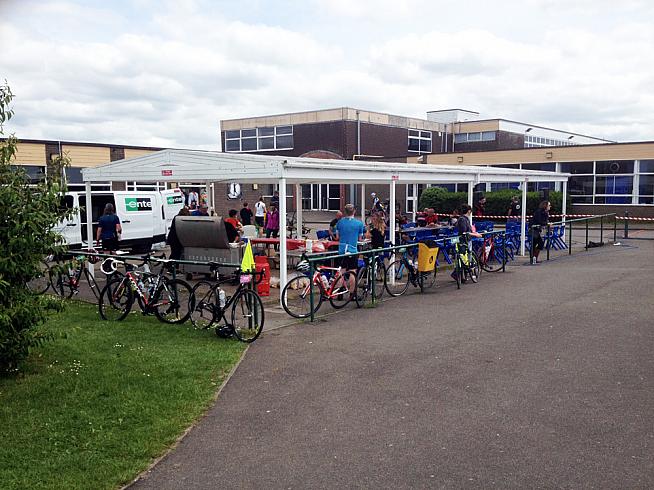 The Black Rat sportive has found a permanent home in the calendar around mid-May. Based just a few miles north of Bristol, it is the closest sportive to my home - although, as the organisers have developed the event and taken on feedback it has gradually got slightly further away. When I first rode the Black Rat it started at Portishead and went round the Mendips. For the last two years event HQ has been Clifton Rugby Club by The Mall shopping centre and the route has gone over the Severn Bridge and around the Wye Valley.

This year the ride started from Marlwood School, Alveston close to Thornbury. This had been the site for the final feed station the previous year. The main reason for the new location was to keep riders away from the main roads and allow participants to get over the Severn Bridge and into the picturesque part of the ride quicker.

Advance sign ups numbered around 350 and there was plenty of well marshalled parking in the field behind the school. There were three distances to choose from: Granfondo (162km), Mediofondo (116km) and, new for this year, the Piccolofondo (85km). GPS downloads were available for all routes prior to the event. 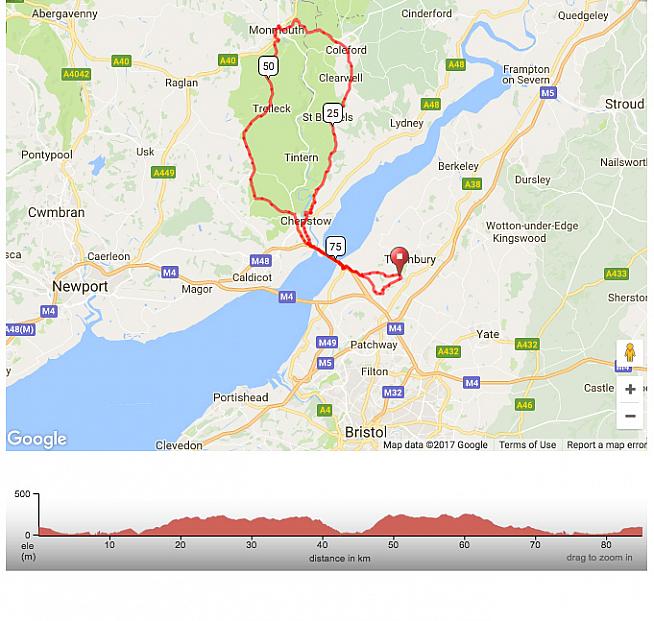 The Black Rat was advertised from early November 2016. Costs for those signing up before the end of that month were £29 for the two longer routes and £26 for the shortest route as it only featured one feed station. Prices went up by £3 from 1st December 2016 and another £3 on top of that from 1st May 2017.

Rather unusually the event also has its own app, which includes a 50 mile route suggested as a training ride for the main event. This route featured geo tagging so that you ride to a certain point and then the app provided instructions to the next point on the route when you arrived. The course was on my doorstep around the Mendips.

Whilst a novel idea, I found the geo tagging frustrating because it meant constant interruptions to the ride in order to get my phone out to check the course. I think some of the tags weren't working correctly but that might have been my phone. I tried the course a second time with a standard GPS map download and got on much better. If anything the training route was good preparation for the two longer rides as it seemed harder than the Piccolofondo with two testing climbs including Cheddar Gorge.

In previous years the organisers had also arranged one or two free group training rides a month or two before the main event. These usually were shorter distances than on the day, but taking in parts of the actual course as a taster. However, I did not see any advertised this year.

Back to the big day and registration was open from 7.30am with start times from 8.30am. I arrived just after eight and quickly got ready. it looked like a good tactical move as I appeared to have missed registration rush hour and walked straight up to the desk. The sign on areas were ordered into the three different distances. Two cable ties and a timing chip in a handlebar number were handed over. A really simple process.

My self-congratulations at avoiding the queues quickly disappeared when I made enquiries about toilet facilities. Despite being in a secondary school there only appeared to be two single unisex toilets available, one in the main building and one across the car park. Seeing the queue I opted for the outside office and that was where the fateful conversation regarding the absent cycling helmet occurred.

The unfortunate rider who was sans headgear was due to tackle the Granfondo and appeared anxious to make a start. The PA system roared into life just before the scheduled start time and it was loud enough that we could clearly hear the briefing despite being a good hundred metres away. I had thought that they were going to let groups of riders off in intervals of a minute or two, but the mass ranks of the peloton left as one. I don't know how that worked out as I joined the stragglers about ten minutes later. 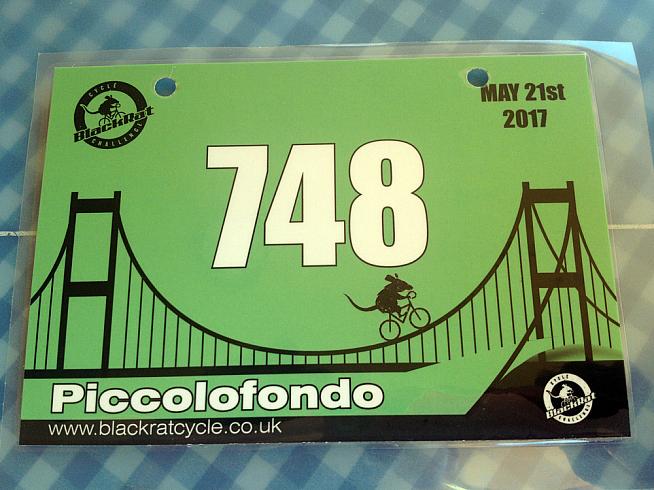 The Severn Bridge crossing is a memorable feature of the Black Rat.

There was no messing around on the route as it was straight over the Severn Bridge and then a short drag up to Chepstow town centre. The rider who was waiting on his helmet came past me on the bridge complete with head gear, so his support crew had obviously stepped up to the mark. After only just over eight miles we reached the split where the Piccolofondo diverged from the two longer routes.

The route appeared to be largely on the same main road although it was quite quiet. We headed into the Forest of Dean through St Briavels and Coleford before a pleasant descent into Monmouth. The route had been well signed up to this point but the directional arrows seemed to disappear in the town centre, or at the very least became difficult to pick out. I was in a group of three or four at this point and none of us could pick up the signs. I followed my nose based on previous rides and we emerged successfully on to the biggest climb of the day up to Trellech.

All three routes had come back together for the rest of the route and to take in the Trellech climb, which has become a permanent fixture in almost every Wye Vally sportive. It is one of the longest climbs in the area that I am aware of. The gradients are pretty consistent at around 6-8%, so there is an opportunity to get into a consistent rhythm. Then, just when you think you have reached the top, there is another short ramp.

The reward at the top was the Trellech food station. There were all sorts on offer - pastries, Jaffa cakes, peanuts, bananas and energy drinks. Someone offered a tea and coffee but that was only for the volunteers and not the riders. There were also no toilets. When the location has previously been used as a feed station there had been portable toilets in the car park, but not on this occasion. It had been mentioned at the briefing, with a suggestion to use the public toilets in Monmouth, but that was not a great alternative as there was the issue of bike security whilst using the facilities.

Suitably refreshed, I set out on the final part of the route which was relatively flat in comparison to what had come before. After going back across the Severn Bridge there was a final short, sharp climb in Tockington. By this stage my lack of fitness was telling and it was a relief to limp across the finishing line and fortify myself with a glass of Black Rat cider. There was also a pork roll or similar vegetarian option, although no gluten-free alternative. Unlike in previous editions, there was no souvenir for finishers - perhaps the budget was blown on the app? - meaning my treasured Black Rat branded small glass tankard may soon be a collector's item. However, times were available on the spot for all finishers.

The weather had held out and the whole day was dry, although slightly colder than forecast.

I enjoy the Black Rat because it does change from year to year, so it is apparent that the organisers are open to improving and changing the event when there is the opportunity to do so. The little things like the toilet situation at HQ and the feed stations need to be covered off as well though, to continue to make it a great experience.

All in all, the Black Rat remains a local favourite with a great day's cycling whichever route you choose. Just don't forget your helmet...