Scotland is a wonderful place. I spent many holidays there when I was a child, in and around the Southern Uplands where my grandparents lived. I still have many relatives in Scotland, but few that I see these days.

Despite spending a lot of my childhood there, I never really cycled. The Leadhills around Sanquhar seemed far too steep for a pre-teen to even contemplate, and grown-up holidays were orientated towards visiting the cities. I only remember going to Loch Ness once, when my family stayed near Drumnadrochit way back when my kids were small. It seemed quite flat - well, it was basically a 25 mile lake shore, wasn't it?

Scroll on nearly 20 years and I was back for the fourth edition of the Etape Loch Ness, a 106km lap of the loch which has burgeoned into one of the most successful early season riding events in Scotland. Over 5,000 cyclists of all abilities converged on Scotland's Highland capital to take part, filling Inverness's hotels and guesthouses. 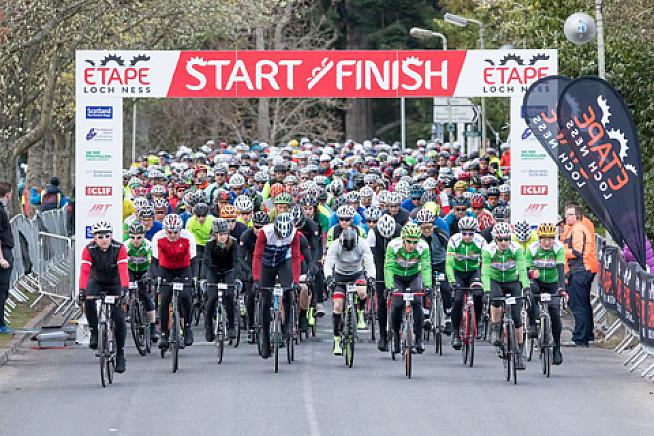 Riders line up for the start of the 2017 Etape Loch Ness.

I arrived the day before to register at the event village outside the Eden Court theatre on the banks of the the River Ness. Barely 500 metres away, past the small but perfectly magnificent Inverness Cathedral, I'd dropped off my overly large overnight bag and bike box at the splendid Strathness Guesthouse, opposite the fine red sandstone Inverness Castle. As event HQs go, you'd be hard pushed to find a more picturesque setting.

The weather was kind, too - weak spring sunshine bathed the venue as hundreds of nervous and eager participants milled around, were efficiently assigned their rider packs, collected sundry freebies, purchased last-minute essentials or event merchandise and noshed on haggis burgers or pastries. 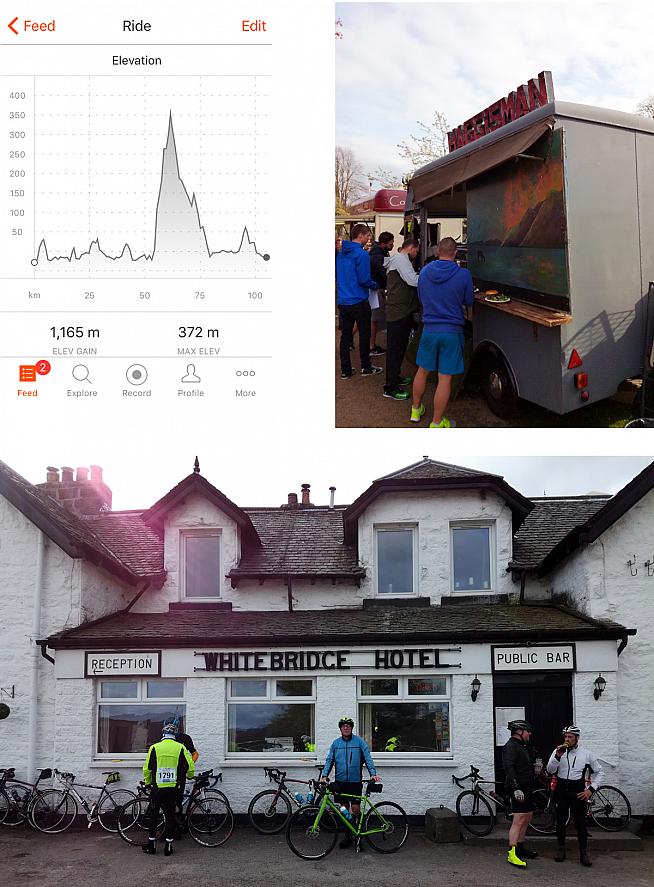 KOM section clearly visible on the route profile - a good excuse to stock up on a pre-ride haggis burger.

I was thankful for Alpine Bikes being there as I routinely forget to pack something, so I grabbed a bidon and some emergency energy drink. I also grabbed some cans of lager from the shops and 'prepared' for the next day's efforts with a Netflix binge and lights out an hour too late.

The day of the ride dawned, literally. My start time was 06:19 - how's that for ruthless efficiency - but true to form, I'm always running late. The landlady had provided me with a carry out breakfast, so fuelled mainly with instant porridge, I joined the snaking stream of cyclists flowing past the front door of the guesthouse and hopped gaps until I managed to meet up with my departure wave, hitting the course a mere 20 minutes later than planned. 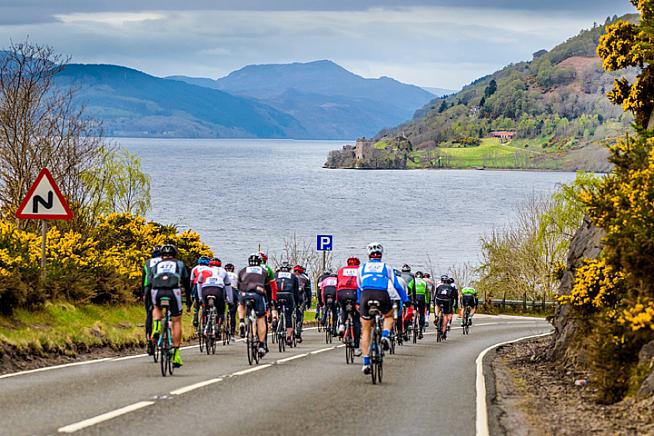 Groups of riders were whistled off by an increasing hoarse John Anderson, the veteran referee from the Gladiators TV show. I was kind of disappointed that he wasn't contractually obliged to shout 'Gladiators - Ready' every 30 seconds, but it was probably for the best as he's in his eighties now.

Despite the early start there were plenty of locals to wave and cheer us off, adding to the friendly appeal of this ride. Once out of Inverness and on to the course proper, it was easy to forget that this was a closed road event. Everyone, myself included, seemed conditioned to stay left of the centre line, so much so that my elbows nearly touched others I was overtaking. Pretty soon, though, like the sun rising over the loch, it dawned on all of us that this road was all ours, and people relaxed. 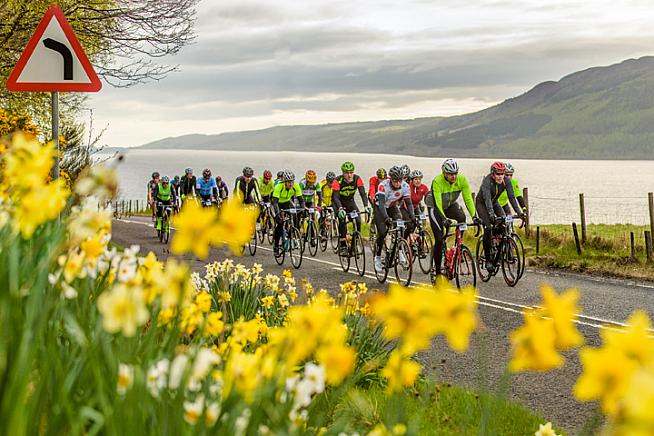 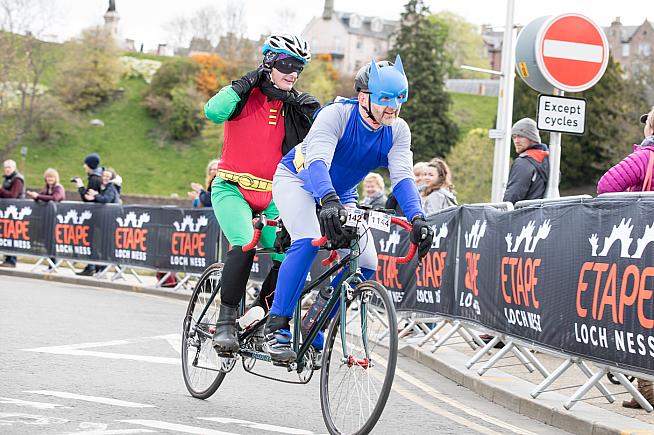 Celebrities turn out to enjoy the Scottish spring sunshine.

Most of the first hour was into the wind whistling down the valley, and only an eastward swing inland to Drumnadrochit relieved our hardship. Once more the local population was out in force to cheer us on, seemingly content that they were trapped in their town by a rolling wave of cyclists. After the town, the road climbs up to perhaps the most famous view over Loch Ness, the ruins of Urquart Castle. I stopped to take a quick photo, adjust my saddle and have a look up and down to see if Nessie was going to make an appearance.

A little while later, the water still reassuringly devoid of monsters, we came to the first of the excellent feed stations at Invermoriston. The marshalling here was second to none, with warning and advice sign in advance, and coned off portions of the road to ensure no speedier, grub-skipping participants were held up by the more mortal among us that craved bananas, flapjacks or a toilet break. 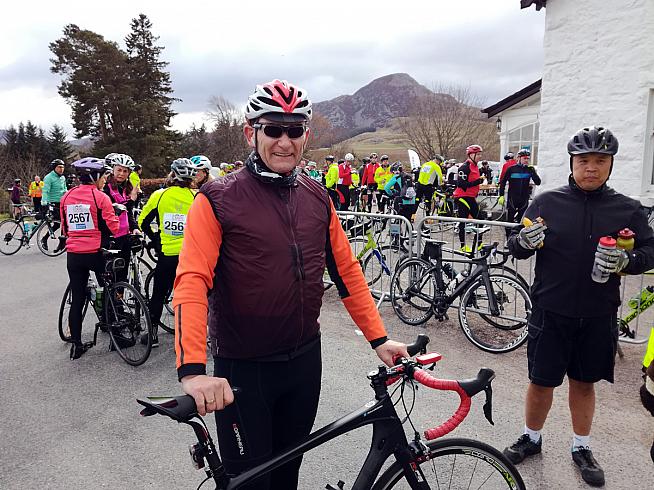 After some more loch-side miles we reached Fort Augustus and crossed the Caledonian Canal for the second half of the ride. The profile here takes on a mid-ride hiatus, and the promised King of the Mountain segment loomed into minds and reality. Some, like me, took the opportunity for a nature break at the roadside and to consume saved gels.

The climb up General Wade's Military Road came as a shock to the system; after hours of rolling up-and-down terrain, the constant gradient destroyed some already fatigued legs. At nearly 8 kilometres long it's no Alpine climb, but consigned many I passed to tackle it on Shanks's Pony. 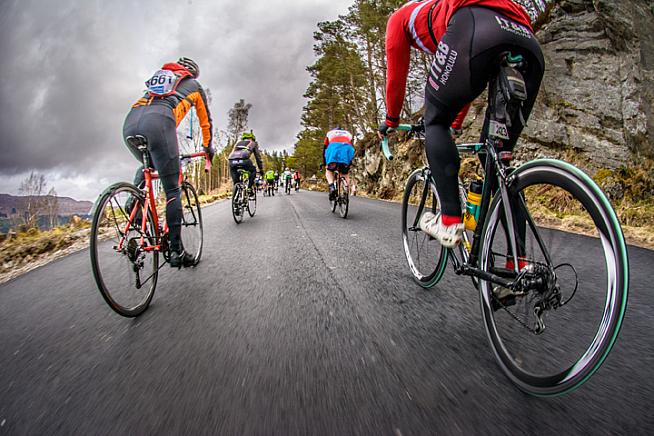 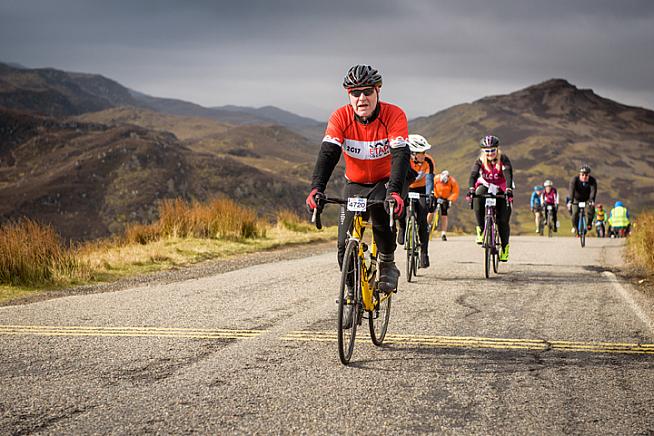 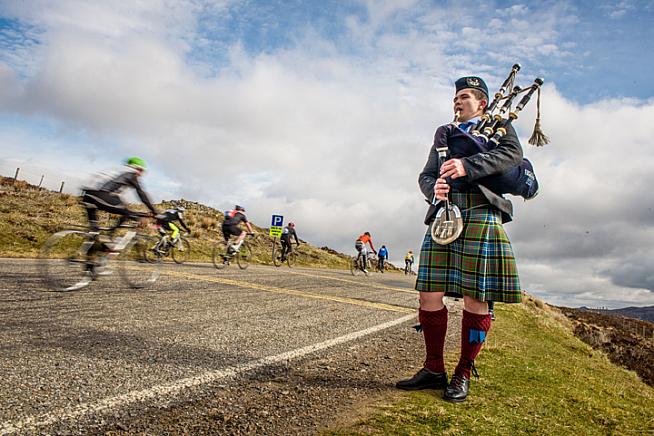 The faster you finish the KOM challenge the sooner you can escape the piper.

Possibly, the second-most-evil part of the section was the rapid descent midway through, fooling the less familiar of us (i.e. me) into thinking the misery was over, only to be presented with another few km of slog. By the time the end of the climb came into view, it was hard to tell of the screeching in my head was from the lone piper at the summit or from my quads. Still, I mananged to showboat the last 50 metres with a bit of out-of-the-saddle effort, just for the photographer.

What came next was worth all the misery - a ramrod straight section of downhill, devoid of traffic, that could have been magically summoned by some ancient Celtic witchcraft from the grinding of teeth and the sweat and swearing of the previous 40 minutes. Even the headwind had been temporarily hushed. 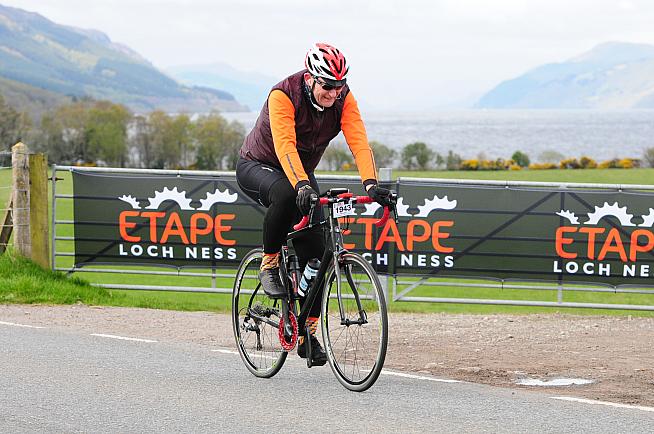 Bombing along the flat loch road.

Another well-placed feed station beckoned at Whitebridge with the sudden realisation that the ever-present Loch Ness had not been by my side for over an hour. It felt odd. But not for long - a sharp left off the main drag took us back to the banks of the Ness for the majority of the blast back to Inverness. The rolling loch-side road was a joy to ride, with mostly gentle gradients and a few short, sharp power climbs.

There was one more feed stop, a welcome breather for those heady after the descent from the KOM, who blasted past Whitebridge. 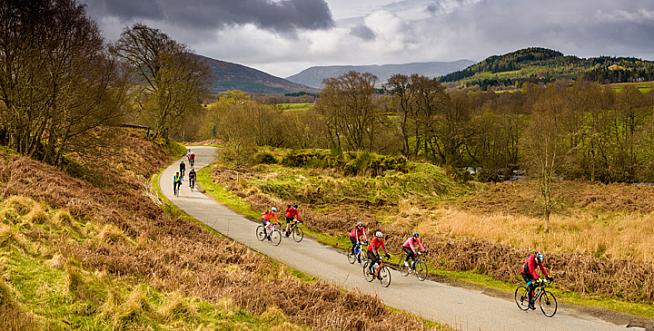 The B-road coughed us out at Ness-side for our first taste of traffic since the start, a left-lane closure in operation along the banks of the Ness and under the Castle. Here we legally jumped the first traffic light of the day and were cheered through to the finish next to Inverness Cathedral.

It was a great finish to a great day. Beautiful April weather after a crisp and cloudy start, magnificent scenery and wonderful support, both from the legions of marshals along the route and from supporters in all of the towns and villages we passed through. 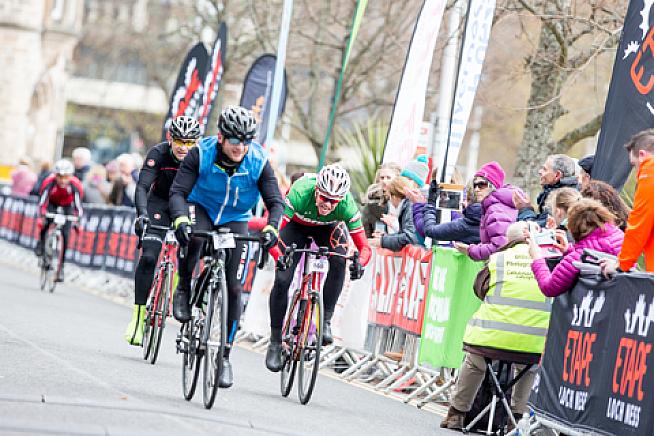 Etape Loch Ness was by far the biggest cycle event I'd taken part in, and the organisation was second to none. It clearly has the support and blessing from locals in and around the Inverness area, and I for one will be back next year - though perhaps I shan't make such a flying visit this time. It's a part of the world to savour.

The Etape Loch Ness will return in April 2018. For more information and to register your interest, visit www.etapelochness.com.