Severn Bridge Sportive: Paul gets chicked in the cargo challenge

The Severn Bridge Sportive is a bit of a Jekyll and Hyde event when it comes to the choice of routes. Last year I was still in recovery mode from the Etape du Tour (although that was several weeks earlier) and consequently I took on the 60 mile option. This year I had no major event to aim at, and I hadn't yet completed a century ride. I resolved to rectify this omission on the basis that I would have an extra day of rest afterwards due to the Bank Holiday. Needless to say, the 100 mile route was a shock to the system, and a much different day on the bike than the 60 mile.

Both routes started from Castle Combe motor racing circuit near to Chippenham, Wiltshire on Sunday 28th August. It was the fifth year of the event, organised by Andy Cook Cycling, although it was only the second time I'd taken part. We had the run of the circuit from the time that registration opened at 7am. There was plenty of parking and use of the permanent toilet facilities. I learnt from the previous year that it was preferable to get ready and then go and register as the car park was about a 5 minute walk from the start.

I arrived at the off just before 8.30am but riders had been departing from 8am. There was no queue at registration, which involved a timing chip sticker on the side of the helmet and a handlebar number with cable ties for the bike. A small group was waiting at the start and I joined them for the short but to the point briefing. We then set off around the open expanses of the circuit before diverting on to the country lanes half way round.

The course was the same for both routes over the first 30 miles. This involved a series of mainly flat country lanes and B roads out of Wiltshire and through South Gloucestershire with the ultimate aim of riding over the original Severn Bridge.

The forecast for the day was warm and dry to start with, but the forecast promised a chance of rain later on. I had my pockets crammed with gels and a waterproof jacket, which attracted a comment that I looked like a domestique going back for everyone's food in the peloton.

Although I was prepared, I was fatally undermined by my narcissistic side at an early stage. On a rare slight uphill slope I got out of the saddle to glide effortlessly past a group of female riders who went by the name of "Chainset Chicks" according to their jerseys. However, the opposite sex were underwhelmed as they just said to me "You've dropped your jacket". Tail between my legs I turned back to retrieve it from the road. It had dislodged itself from my pocket due to the surrounding pressure from the myriad of gels. I didn't see the "Chicks" again until the Bridge. 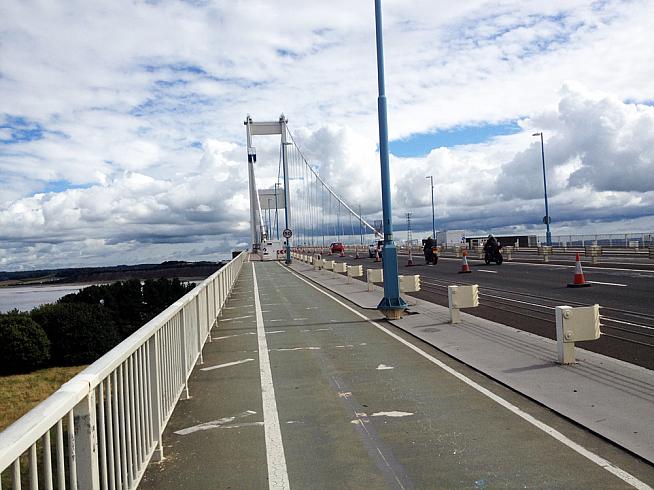 Crossing the Severn Bridge is a highlight.

The August Bank Holiday Sunday morning appears to be the time when essential maintenance work is carried out on the Bridge and so it is closed to motorised traffic. The previous year we cycled on the road across the structure whilst the Severn Bridge Half Marathon were using the road on the other side. This year, for technical reasons, both events were using the footpaths across the Bridge but on opposite sides. As we went across the runners were also going in the same direction and we both had the same ultimate goal. A change from twelve months earlier was that our feed station was on the edge of the Half Marathon site, just off a roundabout on the Welsh side of the Bridge.

The feed station was a small marquee with flapjacks, bananas, peanuts, energy drinks, hot drinks, water and a variety of old school fare such as Penguins, Frazzles crisps and jelly babies. There was much more variety than I've detailed here, along with garden tables and chairs to sit and enjoy the experience. Portaloo-style toilets were a short walk away on the Half Marathon site. 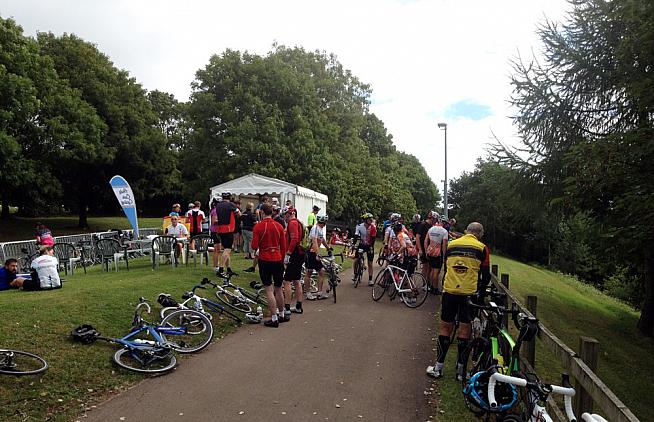 At this point the 60 mile course turned back home on a slightly different route but of similar terrain to the outward journey. However, feeling good I went for my original plan of the long course. This involved an extra 40 mile loop on the Welsh side via Chepstow, Usk and Raglan, through hilly landscape that accounted for the bulk of over 2,000 metres of climbing.

The first climb of significance was a 4km ascent of Wentwood Reservoir. It had an average of 6% but one short bit went over 18%. I don't know how many riders were on the whole event but I only encountered a few others on the longer route. I had assumed that the course would take in bits of other sportives I had cycled in the area, but I was pleasantly surprised that lots of it was on roads that I didn't recognise. There were other challenging climbs along the way but none as long as that first one.

At the 60 mile point the rain had relented and one of the signs, a white arrow on red background, pointed left off the main road. I had downloaded the course route from a link on the website and as I made the turn my computer informed me for the first time that I was "off course". I cycled back to the junction. The sign looked legit and there were no other riders around to consult. I followed the sign, which turned out to lead to an 800 metre, 9% climb billed as "Kingscoed Killer" on Strava. At the top was a T-junction with no sign which confirmed that I, and lots of others in front of me, had been had over. I returned to the main road and spun the sign around on its cable tie to point the right way.

Eventually, the climbing ended back at the same feed station as before (which we learned had missed the rain). The extra loop turned the sportive into an entirely different event from the out and back shorter route, but it was a very worthwhile challenge. The only criticism was that there was no additional feed station on the 40 mile loop - even a small refuelling point half way round would have been welcome. Most 100 mile courses break down into at least three feed stations and an extra one here would have assisted physically and mentally.

The climb to the Somerset Monument provided a final challenge.

There was a sting in the tail that we had been warned about at the briefing. Although the 30 miles back to base from the feed station was mainly flat, an 8% climb of one kilometre lay in wait up to the Somerset Monument in Hawkesbury Upton. With the needle close to empty this was a tricky denouement.

At the finish the ride ended back on the racing circuit and there was pasta awaiting, although unfortunately no gluten-free option.

This sportive is recommended and well-organised. If you want a good social out-and-back 60-mile jaunt this is for you. If you want a 100 mile challenge to test your legs and your resolve then it's also for you.

Entry fee for both courses was £29 - and, for those looking to make a family day of it, the Castle Combe Family Cycling Day promises to keep everyone entertained with cargo bike races and a cycling skills challenge. But no prizes for letting your cargo fall out of your back pocket...