Saddleback Sodbury Sportive: a spin with the Rotary Club

I've never been a member of a Rotary Club, but based on the Chipping Sodbury branch they are well organised, and know how to have a good time while raising a five figure sum for charity from their annual sportive. I believe that this was the fifth year the event had run, so there was plenty of experience to call on. The sportive was again sponsored by Saddleback, a local importer of cycling gear, and based at Chipping Sodbury Rugby Club, right on the edge of the Cotswolds.

A strong turnout of 940 riders set out on Sunday 21st August along three different routes - 100 miles, 60 miles (actually 63 miles) and 30 miles. The entry fee in advance was £29 for the two longer rides and £19 for the 30 mile route. Prices increased by £6 on the day. Registration opened from 7am with riders setting off from 8am, with the 30 milers held back until 9am.

Parking was well organised on the adjoining football and rugby pitches and there were a couple of marquees set up along with the use of the refreshment facilities and toilets in the permanent clubhouse. Numerous scaffolding poles had been put together to act as bike racks and I took full advantage whilst going to register at around 8.30am. Registration was grouped alphabetically and there was no queue at my table. I was giving a laminated number with a timing chip on the reverse and some cable ties to attach to my handlebars. 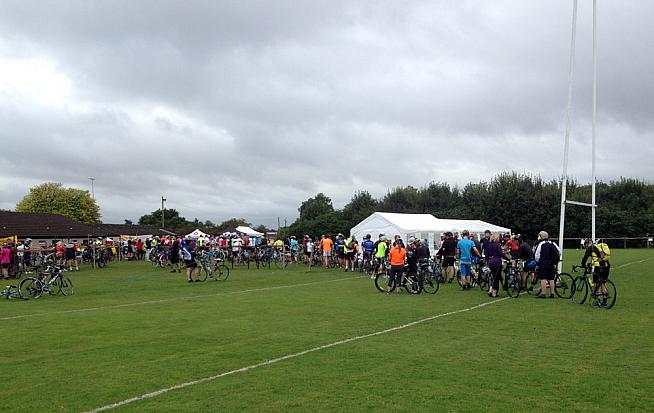 The queue for the start did initially appear to be quite long but it wasn't more than ten minutes before I found myself at the front of one of the two adjacent pens on the start line. This was a good idea because there was then one briefing for both pens before they were let go at intervals of two or three minutes. It saved the voice of the organiser and also meant that they could get people on the road quicker. There was also a thoughtful touch in the queue for those like me who are all about style over substance, as a pair of pliers was provided on a chain to trim down the cable ties. 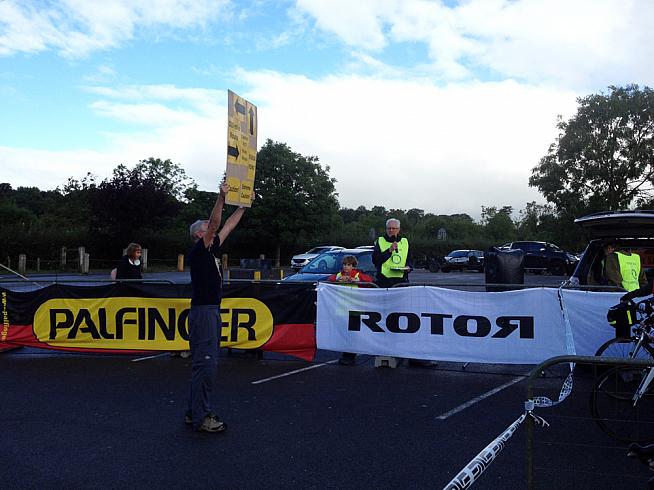 The one potential area for improvement was that I could not find a link to any GPS downloads of the route on the event website. However, it appeared that the routes had not changed over the last few years so I was able to download a course that someone had helpfully recorded on Ride with GPS.

At various points around the course the organisers had placed all kinds of different bicycles, each one sprayed yellow as seen each year at the Tour de France. It was entertaining to see them seemingly at random as I went round the course.

The major climbs all came early and in advance of the 100/60 course split at around 11 miles. There was a sign for each climb with an enthusiastic name like "Hawkesbury Howler" and "Tresham Tester". The signs also gave details of the length of the climb along with average and maximum gradient.

After an initial jaunt along Sodbury Common the climbs came in fairly quick succession but with time to recover between each one. None was more than a mile long and although some of the maximum gradients looked a bit scary (14%) they only really lasted for a few metres, and the steepest average gradient was 7%. Some of the climbs were also signed up as Strava timed sections and again the start and finish points were indicated.

The website stated that there were over 700 signs on the route (I lost count in the early 400s) and the course was well mapped out. The strong wind on an otherwise dry day did blow one or two signs around so the direction wasn't initially clear, but this was only a minor point.

The course was a loop that went up to Tetbury and then headed west before turning south at sea level to follow the line of the Severn Estuary. Although it was mainly flat the strong winds kept everyone on their toes and made sure it was no easy ride. The route then turned back east via Thornbury to Chipping Sodbury. There was over 1000 metres of climbing in total, although there was no ascent of Frocester Hill as on the 100 mile course 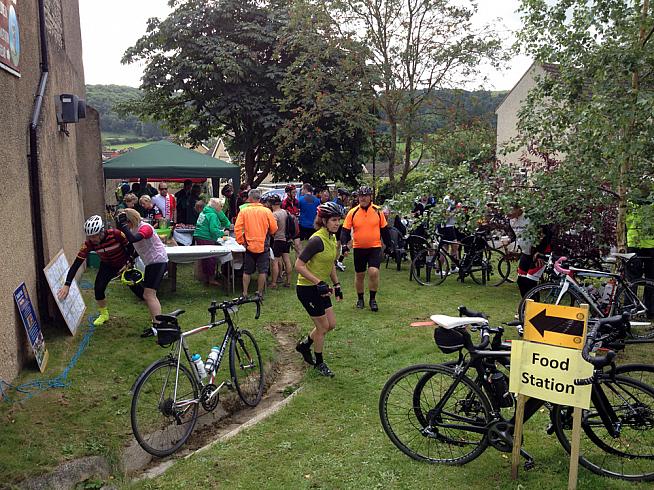 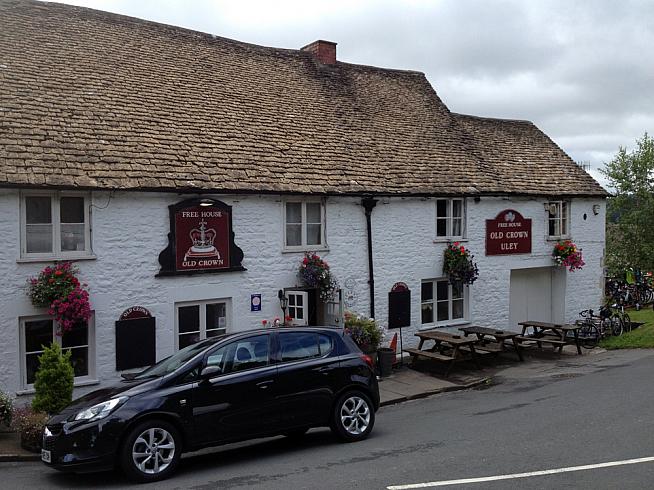 The first feed stop at the Old Crown in Uley.


The two feed stations were really good, with a cornucopia of different food including flapjacks, date cake, bananas, jelly babies in small sealable bags, energy gels, sandwiches and peanuts. There was energy drink and water along with tea and coffee. A mechanic was also on hand for any adjustments that were required.

The first feed station was after 26 miles in the grounds of the Old Crown pub at Uley with use of the pub toilets. The second watering hole was about ten miles from the finish in the car park of a school at Alveston, and again there was the same variety of food and permanent toilet facilities. 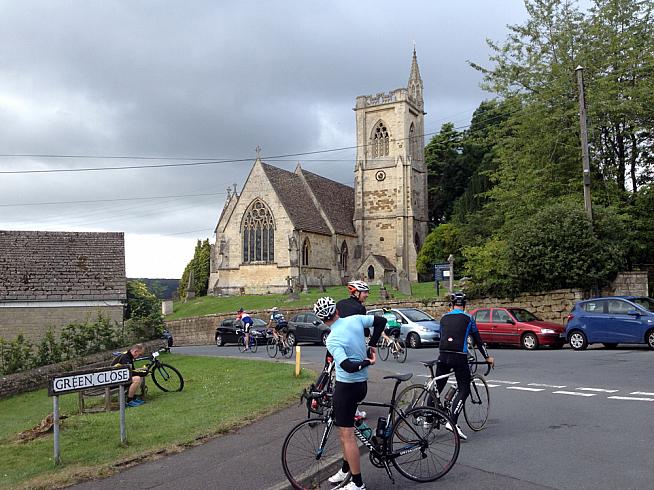 On reaching the finishing line there were plenty of supporters ringing cow bells and every rider was presented with a bike-shaped trophy, which was something different from the usual medal or T-shirt.

When I did the 100 mile route last year things were winding down when I got back to base, but as I finished earlier on the 60 miler I could see that things were in full swing. A band called For The Record were playing good quality rock covers, the bar was open and there was a free meat or cheese pasty and beans for all participants. 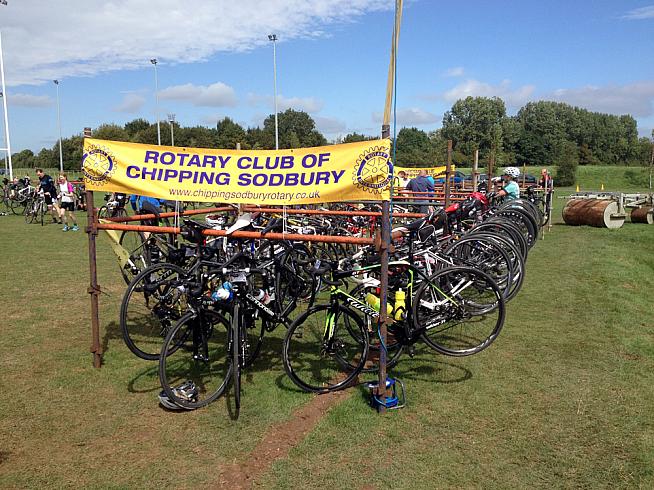 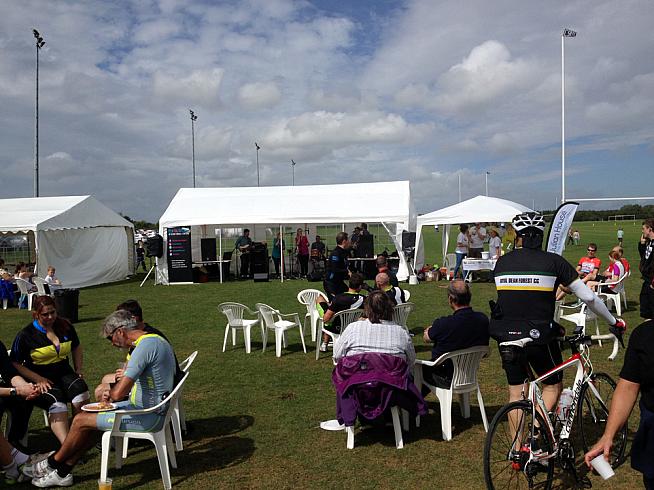 For the Record kept the crowd entertained at the after party.

In order to get the food there was a short feedback sheet to complete, where the main question was "same course or different next year?" It was a tough call for me, because the Rotary Club know exactly what they are doing with this route and they do it very well. However, freshening up the route could lead to more repeat business as riders seek out something new.

It will be interesting to see which way they decide to go: change the tune, or stick to the crowd-pleasing hits? For the record, whatever the route, I would highly recommend giving this sportive a spin next year.