I've been to hell and back recently. It turns out it's not as far as I thought.

Earlier this year I signed up for the Hell of Hexham, part of the Wiggle Super Series of sportives. It was both longer and significantly lumpier than anything I'd attempted before, but I reasoned it was ages away and I would spend the coming months toiling on the turbo, eating up the miles and turning myself into a queen of the mountains. My motivation was pretty simple: I just wanted to ride 100 miles. 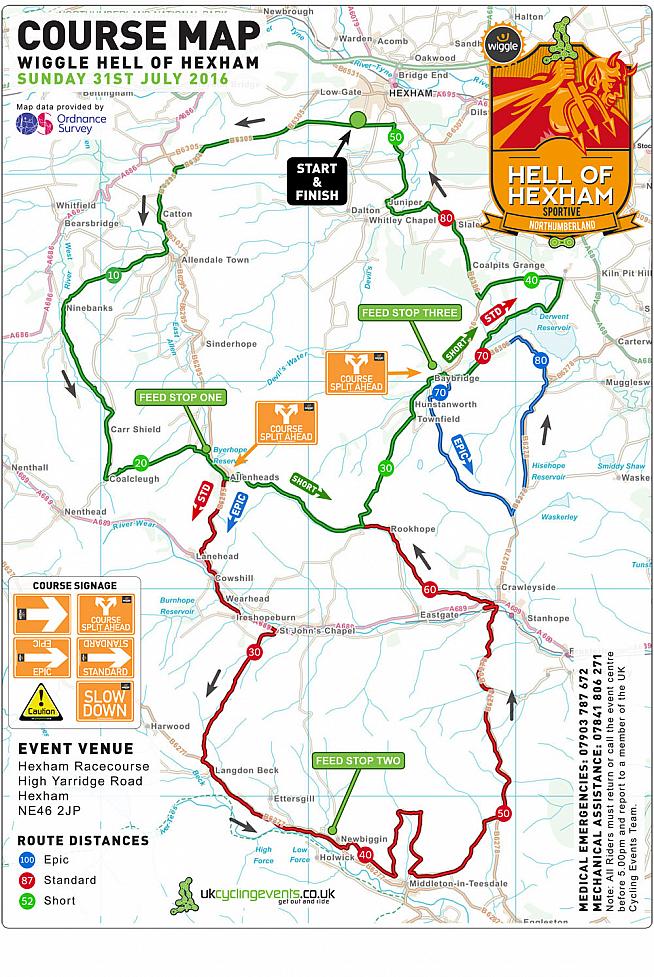 But the road to hell is paved with good intentions. I did sort of follow a training plan. I just did it selectively. Some weeks for example, I selected not to ride my bike at all. Not ideal preparation for a 100 mile ride described by the organisers as an "uphill battle" with around 3,000 metres of climbing.

Fast-forward 6 months and at 7.50am on a Sunday morning I'm sitting on the start line at Hexham Racecourse. To compensate for my suboptimal training I've focused my efforts on filling my pockets to the brim with homemade energy snacks, making myself an informative top-tube sticker and arriving early to allow as much time as possible out on the course.

I'm nervous about the cut-off time partway round, where slower riders hoping to complete the full 'epic' route are required to revert to the shorter, standard route. I don't want this to happen to me so I turn up to the start line so punctually that I find myself in pole position. 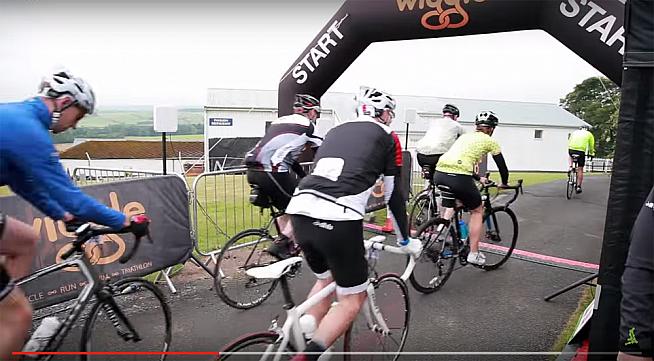 We roll away with me as reluctant lead-out. We've been told to ride in single file until we hit the B-road but I wish someone would overtake. What if I miss an arrow and lead them the wrong way at the first turn? And am I going at the right speed? I glance imploringly over my shoulder, willing someone to pass. Finally, sensing my obvious discomfort, my husband breezes by and sits in front of me. Something he will spend much of the day doing.

The route begins innocuously enough with around 10km to warm up the legs before a steep descent leading to the first hill, a relatively gentle climb just outside the village of Allendale. This is long enough for one of my fears to be realised though: a headwind is going to be our companion for much of this ride.

Before long we are onto our next climb, slightly steeper and twice the length of the first, dropping down to our first feed station in the village of Allenheads. We are now just over a fifth of the way into the ride. I grab a snack from the impeccably well-organised feed area, because I know what is ahead. On the climb out of Allenheads the gradient creeps up again and the headwind continues. I catch a few minutes of respite on the wheel of another rider but never really find a group to sit with. As sportives go, this is not a crowded one. Happily, it's also fairly traffic-free. Some nice flat sections follow and then we've reached St John's Chapel and it's time for another quick snack and a deep breath. 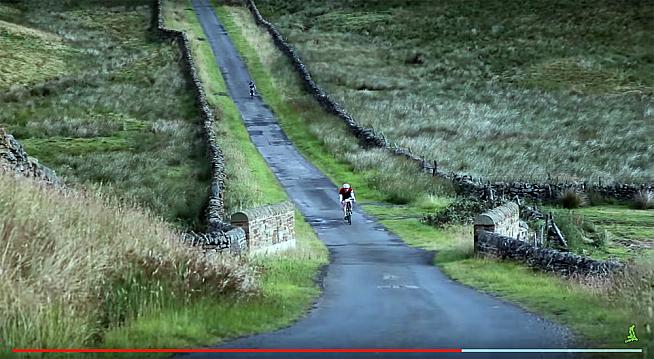 You have to admit it's pretty.

The climb over Chapel Fell makes it into Simon Warren's 100 Greatest Cycling Climbs and is rated 9/10 with 323m of height gain over 4km. It may not sound that daunting, but as we approach the highest paved pass in England we ride past a motivational road sign, which announces "Caution cyclists! This road is liable to adverse weather at all times."

They're not kidding. I rode this a few weeks earlier and the sheep were practically blowing across the road like tumbleweed. As we leave the village there's a short steep climb and then the road undulates briefly until the real work begins. 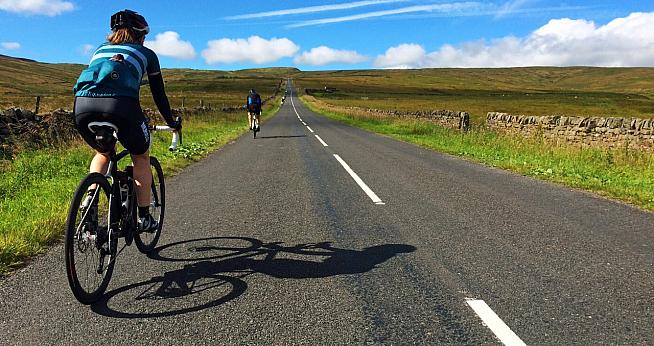 This looks flat. It was not flat. Photo: Olly Townsend

The view from here is a little daunting as I can see the top of the climb disappearing into the distance. It's one of those slow creeping death gradients that photographs don't seem to capture. And then there's the headwind, which mercifully at least, is not as strong as last time. But even now I'm slogging it out in granny gear. I pull up alongside a bloke wearing the kit of a local triathlon club. "Are you going for a run after this?" I offer by way of gallows humour. He looks like he wants to cry. It might be the effort, or perhaps he's heard that line once or twice before.

At the top, the view over the fells is a worthy reward for the pain. But even the long descent towards Teesdale is tiring in a headwind so the gentle section of road before the second feed station is a chance to catch my breath. We still have over 60 miles to go at this point and, after my recce a few weeks earlier, I'm not looking forward to the next bit. I'm still chewing my banana from the feed station when the next climb begins and this one's a pig. The bottom section is horribly steep - in parts around 19% - and then once my legs are burning, it drags on upwards for 4km before finally spitting me out, with my ears popping, onto immense and remote moorland. 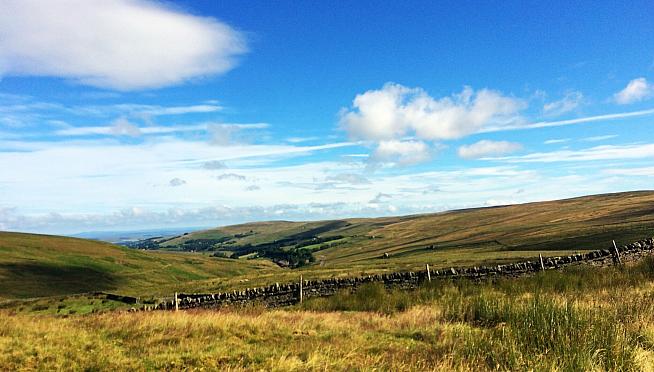 We're not even half way round at this point so I'm feeling the need to conserve energy. I spot a rider ahead and catch up to him, hoping to shamelessly sit on his wheel for a while. He puts up with this until my husband, embarrassed by my blatant wheelsucking, takes a turn on the front. Before long the other rider pulls away and we're climbing again. I pass someone doing the awkward roadside hop of a man with cramp and continue upwards, until the road finally flattens out with miles of common land in every direction. Northumberland and Durham really know how to do big sky and wide open space. 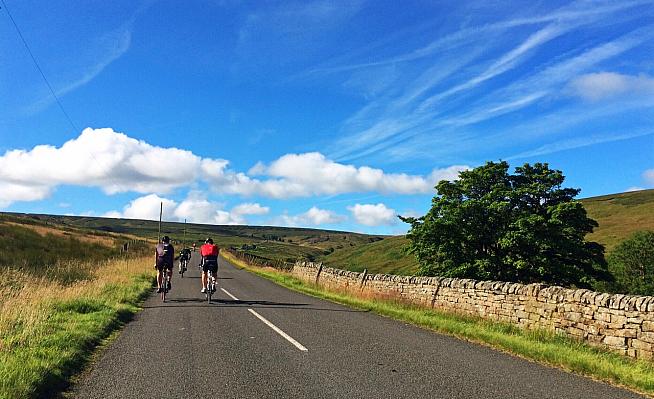 Empty roads mean you can focus properly on the pain of those hills. Photo: Olly Townsend

I'm now on the right side of the halfway mark and there is a long descent into Stanhope. I'm passed by a man who is sitting on his top tube to make himself more aero. He looks a bit silly. The final section of this descent is steep with some tight corners - a marshal attempts to shout a warning from the side of the road but the words are swallowed up by the wind. There are plenty of warning markers along the way though. In fact the signage along the whole route is faultless. They've even marked some of the worst potholes in Wiggle-orange spray paint. 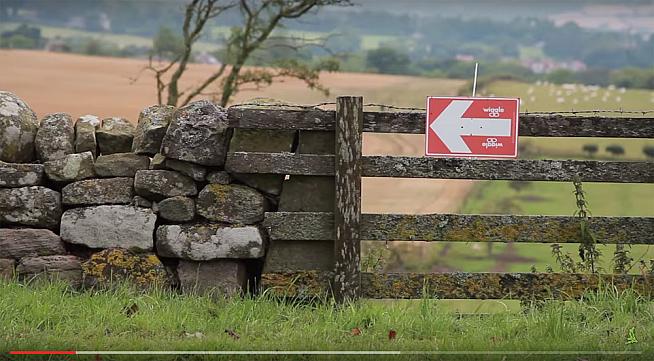 This way to hell. 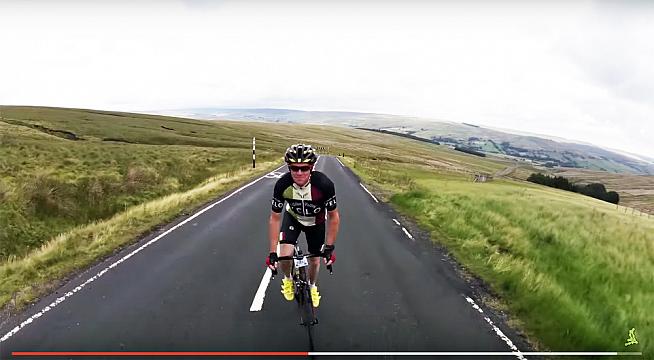 Another climb and a fast descent and we've hit 60 miles. As we arrive in Rookhope my husband and I agree on an unscheduled stop. I need to find a toilet and he needs some crisps. "I'll catch you up," he mumbles through a mouthful of salty potato snacks, when I find him standing outside the pub.

I push on and start the next climb. As I get out of the saddle and brace myself for another dose of headwind and pain I realise that I am for the first time, completely alone. It's a bit eerie. Other than a tractor and one car, it's only me (and the odd sheep) up here.

After another windy descent I reach the final feed station in Blanchland and experience a moment of unbridled joy at discovering a huge tray of cheesy crackers. I'm relieved to find I'm well ahead of the cut off time and hold an impromptu celebration (essentially, more crackers). At this point, replete with crisps, my husband rejoins me and sets about towing me for much of the final leg.

Who ate all the cheesy crackers? Photo: Olly Townsend 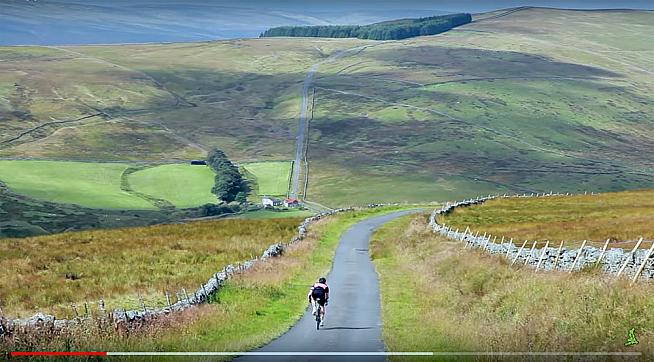 And down we go.


The climb out of Blanchland goes on for longer than I feel is strictly necessary at this point in the proceedings. As we cross the delightfully named Muggleswick Common I congratulate myself (prematurely) on completing the last real climb of the day. And I savour the moment as I realise that, momentarily, there is no headwind and I'm riding on recently laid, perfectly smooth tarmac.

The route becomes gentler from this point onwards, and as I drift alongside Derwent Reservoir I'm tiring but can feel the end is in sight. I can't tell you much about the final 10 miles as I mostly spend them staring at my front wheel. 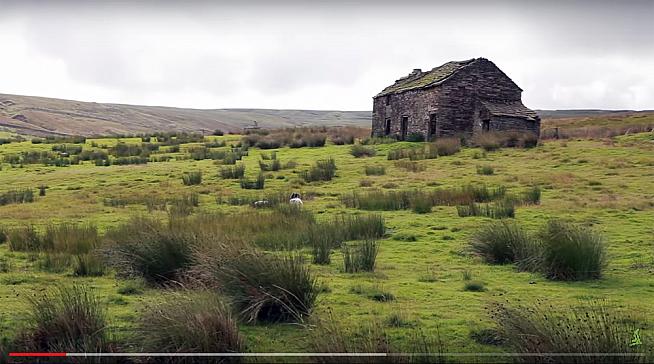 Period detached in need of modernisation...

At some point in the closing moments of the ride I remember one small but important fact: the racecourse is at the top of a hill. Well there had to be a sting in the tail. I cross the finish line 8 hours after I started. All the way to hell and back in 8 hours? It's taken me longer than that to drive to Norwich before now.

As I slump over my handlebars feeling a little bit pleased with myself, there's just one thing niggling me. My Garmin reads 159.1km. That's 98.86 miles. Not 100. But this is the Hell of Hexham, and the devil is in the detail. 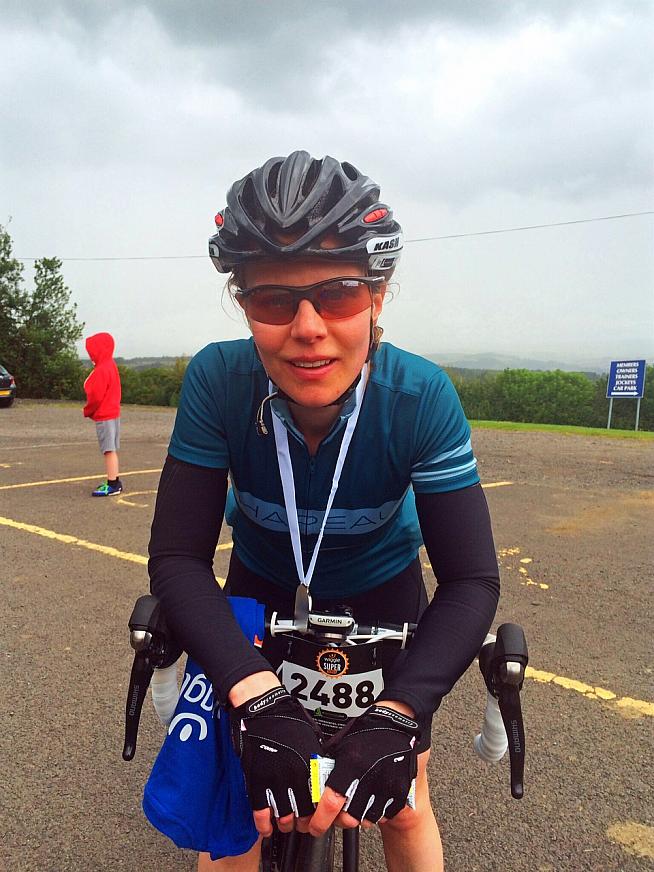 The victorious face of a woman who has just ridden 98.86 miles. Photo: Olly Townsend