The Wiggle Mendips Sportive on 2 July had the potential to turn into a multi-sport event: cyclists encountered outdoor table tennis, football and - a first for me - frog-racing along the route.

Although this is a longstanding event in the Wiggle Super Series, the base for the Mendips Sportive seems to have been moved around over the years, which keeps things fresh. If memory serves it may have started from Keynsham, between Bristol and Bath, a year or two ago. This time around the start was at Strode College, Street, deep in the heart of Somerset and probably not too far from a ley line in nearby Glastonbury. Punters from the festival had departed earlier in the week so the roads to the start line were clear. 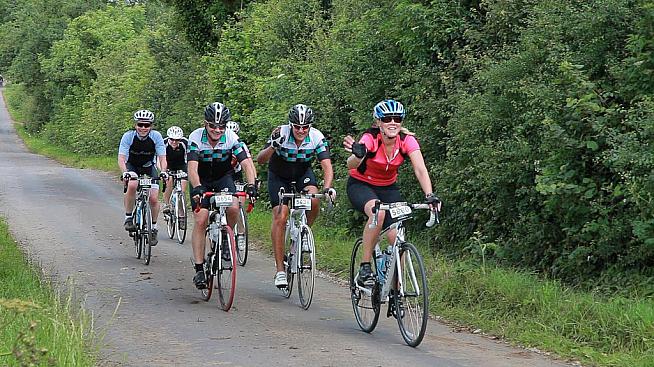 The venue opened at 7.20am, closely followed by the registration desk ten minutes later. By the time I arrived just before 8am things were in full swing for what looked to be a popular ride. The parking at the college was well stewarded, particularly as there were lots of smaller car parks in various nooks and crannies rather than one big field. The college buildings and grounds provided plenty of space for registration, the Wiggle merchandise stand and temporary caterers along with the start/finish zone. Toilet provision was good, supplemented by some temporary facilities.

Registration involved joining a queue corresponding to where your surname came in the alphabet. As usual the Law of Sod applied as my line was by far the longest. However, it didn't take long to reach the front and collect my map, handlebar number and cable ties, helmet sticker and free chain lube.

Three routes were on the menu: epic (97 miles), standard (73) and short (54). The pre-booked price was £35 for the longer two and £26 for the short, with a tardy bird tax applied for riders signing up on the day. The online briefing pack had detailed the epic start time from 7.45am, with 8.15am as a definitive cut-off. The atandard start window was 8.00-8.30am and short 8.15-8.45am. However, the briefing on the day put a slightly more relaxed spin on events. It stated that anyone on the epic had to reach the split point by 10.30am. As the split was just under the 20 mile marker, this appeared achievable for most. 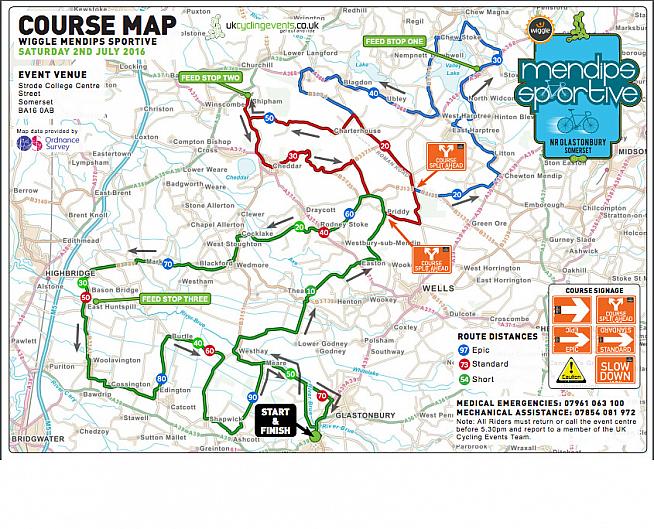 The various routes were all available as online Garmin files, complete with a difficulty rating out of ten by the organisers. The epic scored an 8/10 with 5,144 feet (1,568m) of climbing. The standard was a seven (3,536 feet/1,078m) and the short a five (1,919 feet/585m). Compared to other Super Series events this was quite a close grouping across the board.

The first dozen miles were pan flat across the Somerset Levels with the Glastonbury Tor visible not too far away. As I set off the dry morning suddenly unleashed a shower. Thankfully, this was short-lived but the predominant meteorological factor during the day turned out to be the wind.

The initial challenge came on a climb that had previously been my bête noire, rising up to Priddy from near Westbury-sub-Mendip. Previous attempts had resulted in failure for a variety of reasons. Although there are longer and steeper climbs, it is quite narrow at some of the worst sections. This is a factor as it also appears to be a popular local route for car drivers with ensuing road blocks and disruption to cycling rhythm. There were cars around as usual on this occasion, but luck in timing my arrival and having the climb so early meant I was able to conquer the climb, and my demons at last.

The short course split off soon after the top, so avoiding an ascent of Cheddar Gorge. The second split between the epic and standard came only a few miles later, so early decisions had to be made for those who were conflicted. I felt good and toyed with thoughts of epic, but common sense prevailed and I stuck to the original plan. The epic course took in a further loop around Chew Valley Lake along with an additional climb and feed station at Bishop Sutton before rejoining the standard course back on top of the Mendips. 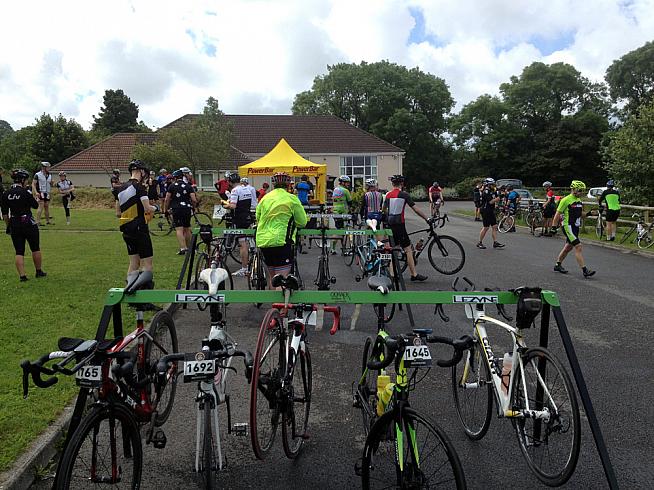 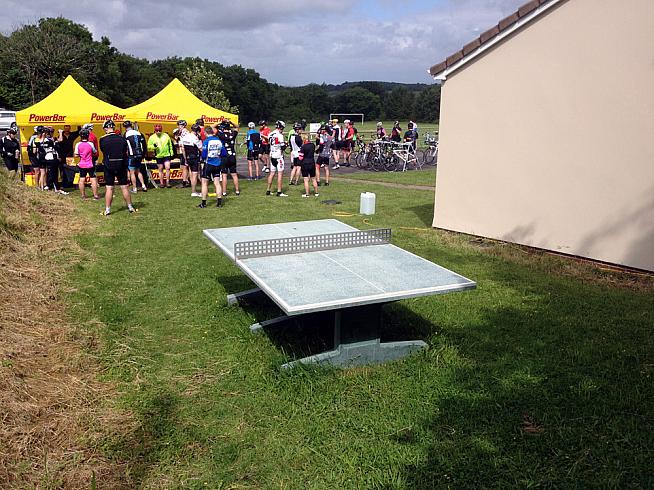 The triumph of hope over expectation.

The standard route continued along the blustery top of the hills until a short out and back section at 28 miles in order to reach the first of two feed stations. There was a descent to the feed station, which of course also featured a preview of the subsequent post-lunch ascent. The venue was Shipham football club. It was the sort of exposed ground where you could imagine the goalkeeper taking a kick and seeing the wind blow the ball back past him or her into the goal. The organisers had set up their stall as best they could after a squall set in when they arrived earlier in the morning. Home changing rooms were the ladies' toilets, with the men using the away dressing room. There was also an outdoor table tennis table, which looked to be the definition of the triumph of hope over expectation. Plentiful and varied food was on offer, as I've come to expect from this Series.

Once steps were retraced on the road there was then a short descent into Cheddar before climbing up the Gorge just after the 30 mile marker. It wasn't as hard as the first climb, more of a rhythmic slog with great scenery at the bottom. 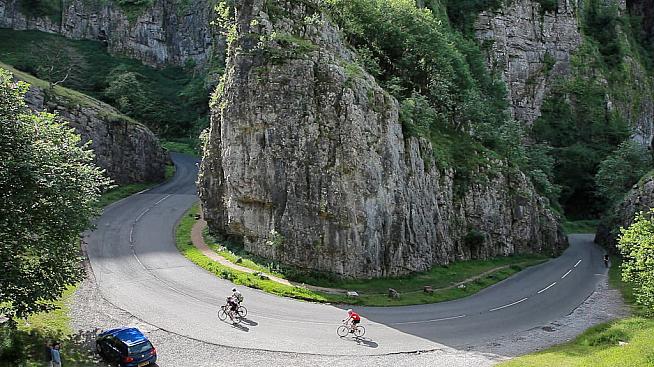 That was it for the climbing. There was a ride along the top of the hills before a long and steep descent into Rodney Stoke. The pre-event briefing had highlighted previous unspecified problems with some local residents at this point, and there were two marshals on hand, but everything went smoothly as I went through. This was probably due to the marshals as there were some tight winding roads just after a fast descent.

Back on the Levels I was anticipating less wind and a flat run in for the rest of the ride. I got the second part but the wind was a constant nagging presence, dominating the unsheltered terrain. The final feed station after 52 miles at East Huntspill village hall provided some welcome respite. 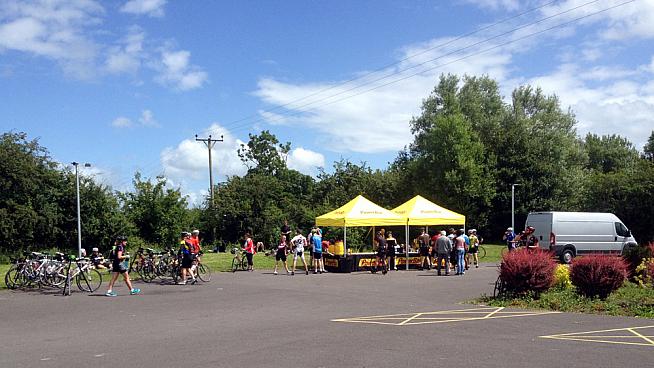 East Huntspill village hall hosted one of the feed stations.

I also have a curiosity to return at a later date, after a poster advertising frog racing caught my eye. 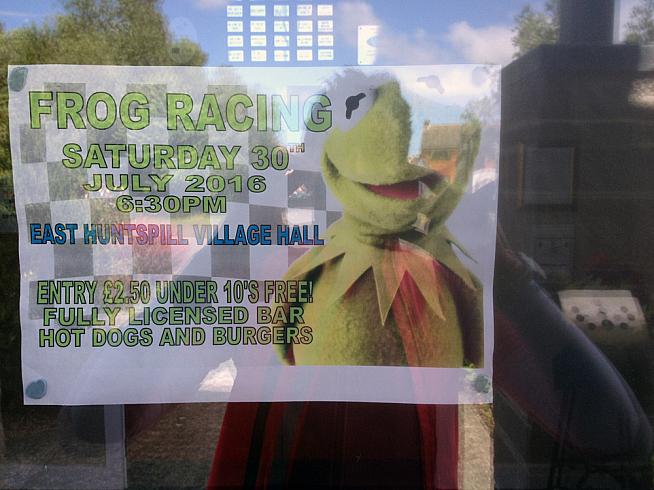 The last flat 23 miles offered no escape from the wind, and the finishers' T-shirt presented at the end of the ride seemed well earned as result. If only we'd received these at the start, they could have served as a sail.

The organisers, UK Cycling Events, are consistent in providing well organised, mass participation sportives that are easy to recommend, and the Wiggle Mendips Sportive was further evidence of this quality.