When people think of sportives abroad, the mind shoots straight to the Alps, the Pyrenees or the Dolomites. La Marmotte, the Etape and Maratona dles Dolomites are of course classic challenges, and worthy of a place on every cyclist's bucket list - but why not branch out and try something different in 2016? How about Norway?

I am of course being slightly tongue-in-cheek, because since moving to Norway the Lysebotn-Bryne sportive is more or less my "local" event. It has been running for 25 years now but remains relatively little known outside of Norway. Having reported on the Etape last year, I thought, why not write about my local sportive, and see if I can persuade some more Brits to join me next year! 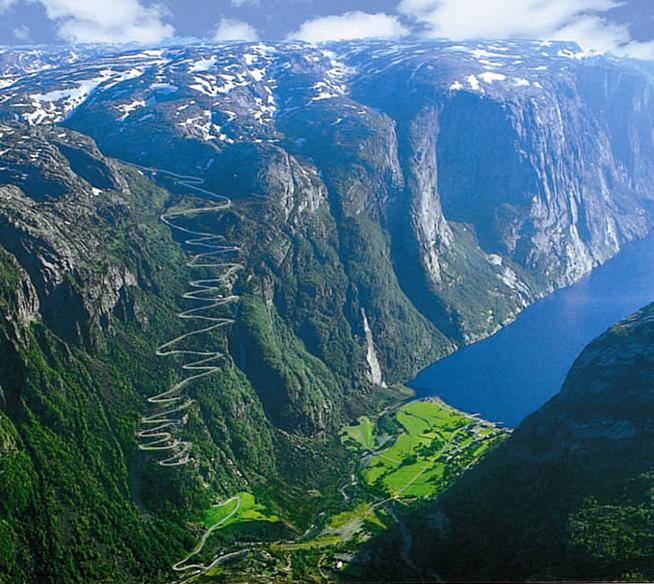 The fjord - Lysebotn - and THAT climb!

Stavanger, a small city in southwestern Norway, and the home of Alexander Kristoff, is the departure point for the rather unique mode of transportation to the start line. Two ferries have been chartered to take riders and their steeds to start the ride; one boat for bikes and another for cyclists. So, bright and early, I find myself pushing my bike onto the boat. I leave it parked alongside 400 others (nervewracking!) and jump onto the other ferry with 400 other excited cyclists, ranging from the mega keen to the pretty keen. Norwegians don't do sport for fun!

The "voyage" is around 90 minutes up the picturesque Lysefjord to the hamlet of Lysebotn, which is basically a tourist centre and a campsite. All the while I wondered where the bike boat was - and, if it sank, what a salvage job it would be! 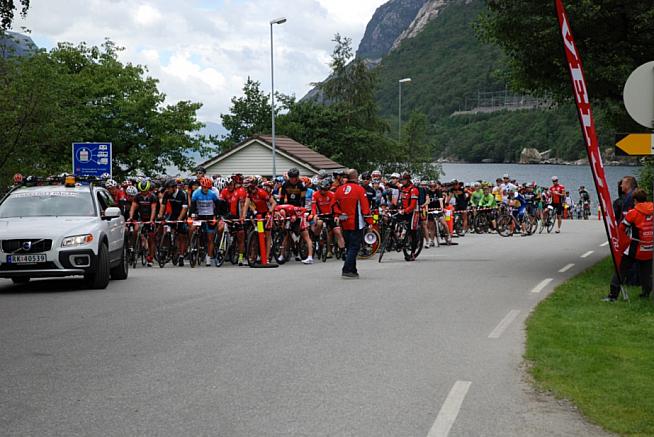 The Lysefjord is spectacular, and exactly what you have in your head when you think of Norway. Thousand metre vertical cliffs on both sides of a crystal blue stretch of water that goes on for mile upon mile. Upon reaching Lysebotn people jump off the ferry, wait for the second boat to arrive and start unloading bikes. This is the fun bit, finding your bike! Protocol is to grab any bike you can lay your hands on, wheel it off the boat, and wander round the melée until you either find your bike or the owner of the bike you are carrying finds you.

The route for the sportive is 148km in length, with a bit over 2600m climbing (according to Strava). But 900m of that elevation is in the first 9km (I will let you do the maths on the average gradient for that).

The photo of the climb speaks for itself, but it is basically a slightly steeper, longer Alpe d'Huez - with the most spectacular scenery you have ever seen. 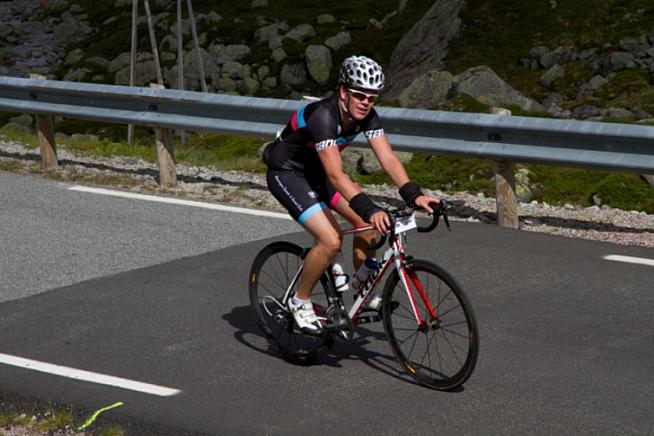 A fattie dying at the top of the climb.

The climb goes up and up, including a 1.5km long tunnel which goes straight into the rock and has a 180 degree turn back on itself. Switchback after switchback zig-zag upwards before breaking out into the mini valley where the walk to Kjerag begins (have a google). 20 odd degrees at the bottom and snow up here really puts into perspective the elevation change.

After the first top a short descent leads into a further climb onto the plateau heading away from the fjord, at 932m vertically above the start in Lysebotn. Now 135km to Bryne commences! 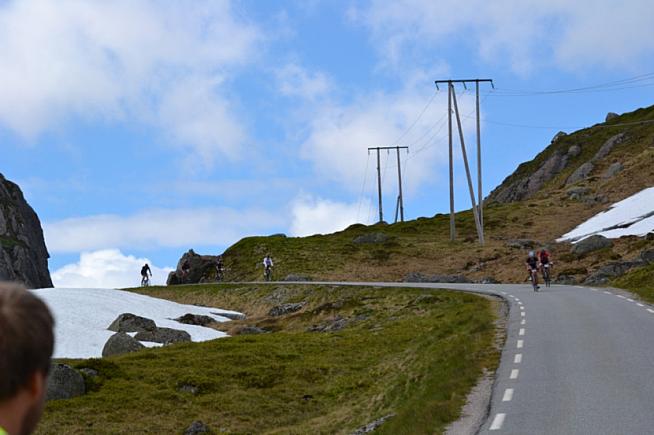 Unlike the Alps, there is no proper descent as a reward. Just an average decline over the next 80km. I was riding with some friends from Stavanger Sports & Social club and we had agreed beforehand that this climb wasn't suitable for sticking together.

At our arranged meeting place 30km in, at the cross country ski mecca that is Sinnes, we discovered that one of my riding mates Martin managed to come off at 60km/h on the very first descent due to the adrenaline in his legs. Luckily he was only grazed, club kit undamaged but was in need of new wheels - a win-win-win situation in a crash like this if you ask me!

From Sinnes you take a right towards Stavanger down Hunnedalen (dal=valley). The slight downhill gradient normally means an average speed of over 50km/h, but race day's headwind meant less, a lot less! By now we were in a small group of my riding buddies and some were happy to take shelter.

Hunnedalen is a beautiful valley and is some 40km in length, running parallel to the south of the fjord the boat travels up. Upon reaching Dirdal at the end of the valley we were back at depressing, depressing sea level, which means nothing but up again. After a brief but painful climb up Dirdalsbakken past the second foodstop I stopped for food. Mega cramp hit at this point in both legs, and the guys laughing at me didn't help. My friend Torgeir joking with the volunteers filling up my ironman bidon that I had merely bought it on the internet raised laughs all round. Except for me, lips were still being bitten! (I blame getting married in May for my 2015 physical condition.)

I soldiered on but the fit guys in my team were bored now, so left me and Eivind (and Eivind's dicky knee) in a slower group to finish. After climbing out of Oltedal the route winds through picturesque farmland in Jæren before finishing just outside Bryne. I walked over to collect my customary finishers water bottle and instead received a Norwegian cycling themed poetry book. The fact that my Norwegian reading ability is equivalent to that of an infant made this gift a bit redundant.

Finally a 4km roll to the station with my reunited group, only to discover there wasn't a train back to Stavanger for some 45 minutes. Pub?

Stavanger is serviced by flights from Manchester, Aberdeen and Heathrow, as well as low-cost airline Norwegian.com from Gatwick. Other than beautiful cycling roads there is loads of nice hiking including the aforementioned Kjerag and Preikestolen, which is one of those things I think everybody should see in their lifetime. If anybody fancies it, see you in 2016!