A motorist has been arrested by West Midlands Police after reportedly running over a marshal at yesterday's Velo Birmingham & Midlands sportive, leaving the 59-year-old man with a suspected broken hip.

Local news website B31.org.uk reports that a 72-year-old male was arrested following the incident in the village of Rubery, southwest of Birmingham.

Police have issued a witness appeal, and anyone with information is asked to contact West Midlands Police on Live Chat at www.west-midlands.police.uk (8am - midnight) or to call 101 any time. 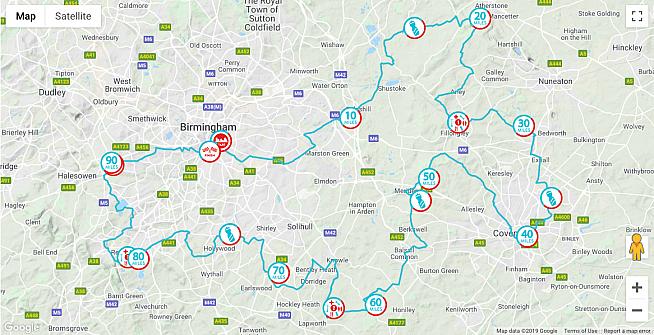 The 100 mile route for this year's Velo Birmingam & Midlands sportive.

17,000 cyclists took part in yesterday's Velo Birmingham, making it one of the largest sportive events in the UK.

Amid the many reports of a fantastic day's cycling, the day was not without incident. In addition to the 'road rage' incident above, Birmingham Live have published video footage of another motorist ignoring instructions of marshals to drive onto the course.

After seeming to argue with stewards, the driver of the black Mini steers around a traffic cone and speeds across the roundabout through a gap in the cyclists before mounting a pavement and driving down a side road.

A spokesman for Vélo Birmingham & Midlands is quoted as saying: "We are aware of an incident involving a motorist disobeying our steward's instructions and driving onto the closed roads.

"We condemn any act that compromises the safety of our riders in the strongest possible terms and have passed the footage onto the Police who will conduct a thorough investigation.

"Thankfully, no riders or event staff were harmed as a result of the driver's actions."

Hannah Mitchell, who filmed the incident on her phone, told Birmingham Live: "We were at the roundabout in Quinton which is about ten miles from the finish line and it is all blocked off on multiple exits.

"The Mini driver pulled up to the cones and then just sat there in his car for a while. He got out and moved all of the cones out of his way.

"People were shouting at him and there were even some people physically standing in front of the Mini trying to stop him driving forward.

"Someone even put down another cone right in front of his car again and instead of moving it he pulled straight out around it. Cyclists were coming down the road really fast - there were a lot of them around at this point.

"After he pulled out, the other side of the road he wanted to get to was blocked off too so he mounted the kerb where everyone was spectating and drove straight down on the footpath," she continued.

"We just didn't know what to do, we couldn't really stop him because we were the other side of the road where the cyclists were coming down so you couldn't just run over.

"My partner went and stood down the road slightly and kind of waved to the riders so that they knew something was going on - I think he caught their attention but the cyclists didn't stop - I don't think they could really see."

On a tragic note, a male rider is reported to have died yesterday morning while taking part in the sportive.

The man is believed to have fallen around 23 miles into the ride at Atherstone, according to a BBC report. He was attended to by medical staff at the scene and taken to hospital but sadly passed away.

The BBC reports the incident took place on Coleshill Road, "a rural location with a steep downhill section with tight left and right bends".

Warwickshire Police have appealed for witnesses.

Sergeant Shaun Bridle said: "We are particularly trying to identify any cyclists who may have seen anything or who may have GoPro camera footage from around the time of the incident to please get in touch."

Vélo Birmingham & Midlands said the death was "incredibly sad", adding: "The rider's family have been informed and all our thoughts are with them at this difficult time."