VO2 max test for cyclists - what does it involve and is it worth it? 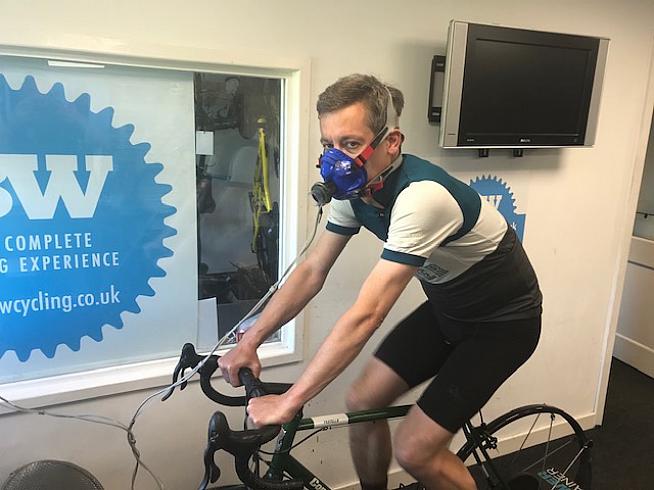 My training for major cycling events over the past five years has not exactly been scientific. I have ridden a lot of miles but I have never used a power meter or worked out what my training zones should be. I have made limited use of a heart rate monitor but only to see how close I was to expiring going up steep hills.

This summer it was going to be different. I invested in some power pedals and decided that I should have a proper fitness assessment to establish my threshold limits and to see just how limited my athletic abilities are. With a press entry in the Maratona dles Dolomites, I was very kindly offered a free VO2 max test down at BW Cycling in Bristol, carried out by Olympic medal winning cyclist Oli Beckingsale.

The idea of a VO2 max test is that it tells you the maximum volume of oxygen your body can consume during exercise. It is considered the best measure of a person's cardiorespiratory and aerobic fitness level. Once you know your V02 max level then you can set training thresholds that are suitable for your level of aerobic fitness, meaning that you don't exhaust yourself during a sportive (or any other sporting event) by going off too hard early on and leaving no energy left to complete the event (something which I have been guilty of in the past).

Once I had arrived at BW Cycling, which is just outside Bristol's city centre in the Hotwells/Brunel Lock area, Oli sat me down and ran through a health check list and made sure he had an emergency contact number in case there were any disasters during the test. For those of you who don't know his name, Oli is a well known mountain biker who has represented Great Britain three times at the Olympics (Sydney, Athens and Beijing) and seventeen times at the World Championships, albeit he is now retired from pro riding and running BW Cycling with Andy Wadsworth, the 2002 Triathlon Amateur World Champion.

I had taken my own bike to the test, although that was only because I had ridden to BW Cycling from the train station, so while I got changed into my cycling gear, Oli hooked it up to the turbo trainer and then fitted a face mask to me. This is part of the Cosmed Fitmate system, which is widely considered to be the best VO2 max measurement system on the market.

He explained that he was going to start me off at a power output of 115 watts and then keep increasing the watts output by 15 watts every minute, until the point where I felt that I could not keep going. I would be measuring both my VO2 max and also my heart rate.

We started off pedalling for about 10 minutes to warm up while Oli adjusted his equipment and made sure it was measuring my breathing correctly. We then started off on the test, with the intensity of effort gradually increasing. I have confess that I wasn't a big fan of having a mask strapped to my face and did find it made it much harder to breath. This may be because I am a mouth breather (rather than a nose breather) and also because I don't think I am very good at breathing (if that makes sense....I have always found it hard to breathe properly when swimming and I think I probably don't breathe deeply enough when I am exercising). 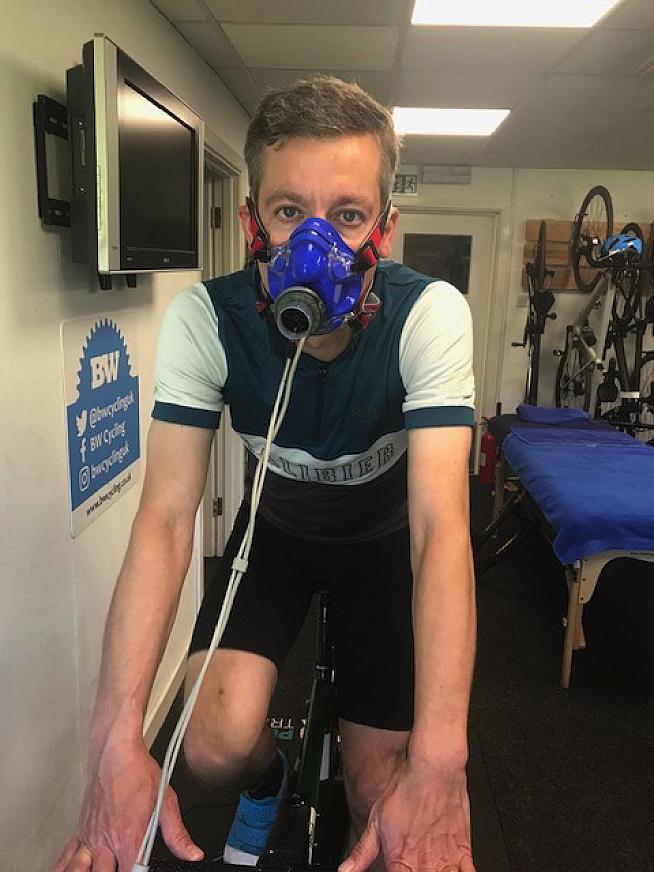 Joe finds out that his VO2 max levels are pretty average.

As each minute passed and the intensity was increased, Oli asked me whether I was happy to keep going. After what I guess was about 12 minutes of riding Oli indicated that he had enough data to work out what my thresholds should be and asked if I wanted to carry on. I was happy to do so, going for another 5 minutes and up to a 280 watt output before deciding that I had done enough. I probably could have jumped up to the 295 watts mark but there didn't seem a great deal of point, given it wouldn't add a lot to the data points and I still had an afternoon of work to do before jumping on a train back to London. 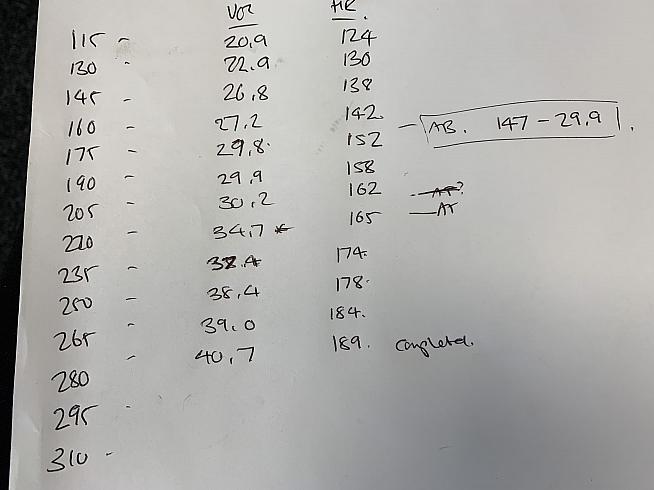 I then went off to have a shower while Oli reassembled my bike. He then promised to send me an email report about my results plus training plans to help improve my riding in the month before riding the Maratona. 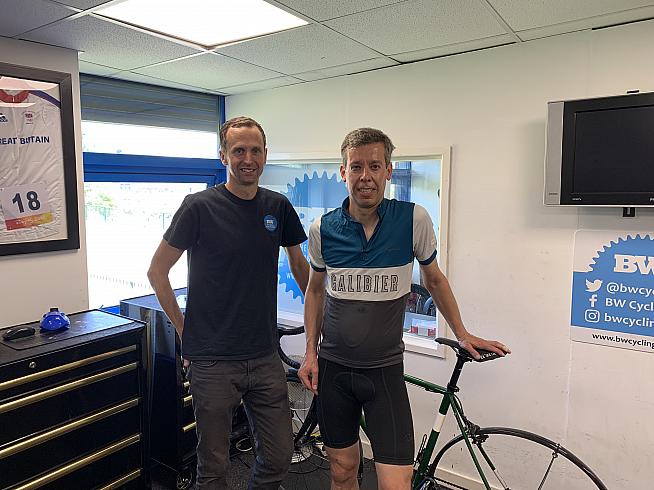 A couple of days later, the email duly arrived with the following summary: "A good test and shows that your base fitness is a at level that is good enough for long distance, at your Zone 2 you are able to ride efficiently. However the difficulty with the Maratona is the amount of climbing and this will force you to produce more power and you will need to work close to your threshold power for long climbs. If you are forced to go over this (currently 220w) then you will burning a lot of glycogen as the fuel source and likely to tire quickly.

"The key for the training in the next five weeks is to work on raising this threshold power. This can be done with 5-15min blocks of work at Z4 and some longer 15-10min efforts at high Z3/low Z4 (commonly known as sweet spot efforts, these are hard aerobic efforts)."

There was also a much more detailed breakdown of the test, which would be too long and boring (for you) to publish here. But essentially it set out zone thresholds and concluded that I have an Aerobic Base Point of 170 watts, a threshold of 220 watts and a maximum of 280 watts, which is good (but no better) for a 47 year old man weighing 69 kilos.

I now know the six zones (both in terms of watts output and also heart rate) that I should be aiming for and Oli gave me a tailored training programme to try and raise my threshold in the run up to the Marmotte. Unfortunately about 10 days after I went to Bristol for my VO2 max test I tore a hamstring when doing strength training in the gym and had to abandon my training and cancel my ride in the Dolomites.

Ultimately, when I am back fully fit and training again, the VO2 max test and the data from it will allow me to train a lot more efficiently and for me to increase my thresholds and therefore go faster. But more importantly, it should also mean that I ride within my own physical limits and that I don't 'burn too many matches' on extremely long rides and struggle during the final hours of those events.

If you are planning to do tough, long rides like an Etape, Marmotte, Maratona or Fred Whitton, I would definitely suggest having a VO2 max test to help you train better and it is well worth the money.

BW Cycling VO2 max tests cost £120 and are available from Tuesday to Saturday. 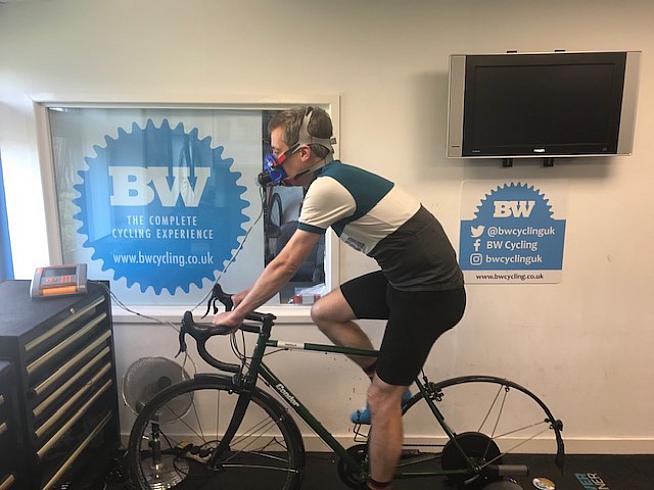 Joe finding it hard to breathe with a mask on.