The Cushion-Aid SaddleDonut is a novel attempt at solving the original 'pain-in-the-arse' problem that has plagued cyclists since the days of the penny-farthing and the bone-shaker - namely finding a comfortable position in the saddle for all day riding whilst still being able to generate power.

If you have ever suffered from saddle sore on a sportive, you'll know that you'll do just about anything to find some relief from the burning raw pain down below. You may not have resorted to Sean Yates' home-surgery technique of digging out an inflamed cyst from his backside with a bloodied penknife, but it's likely you'll have thrown money at one or many of the solutions that are on offer.

New cut-out saddle for £70? Sure, why not! Carefully contoured Italian chamois in your new bib-shorts for just £120? - I'll give them a go. A three-hour bike fit session using video analysis for a mere £200? Sign me up! Anything that promises respite from the sensation of riding with a handful of broken razor blades down your shorts has got to be worth trying.

Well, now there's a new product that claims to solve this problem. At $39.99 (approx £30) including delivery from the States, could the SaddleDonut be the most cost-effective of them all?

Invented by an ultra-endurance cyclist, who has competed in the Race Across America (RAAM), the SaddleDonut is claimed to eliminate 'micro-sliding' in the saddle whilst pedalling to provide more comfortable contact with the saddle and improved riding performance.

After experiencing significant saddle sores on the 3000 mile race, inventor Christian Echavarria had a brain-wave and came up with a swell solution. An intricately shaped pad made of soft silicon-gel that is stuck firmly to the rider's saddle, which is designed to cradle and support the odd-shaped sit bones at the base of the pelvis.

The name 'Cushion-Aid SaddleDonut' may conjure up images of the type of mail-order-only hemorrhoid-relieving products that are advertised on daytime TV by the likes of Ian Botham or June Whitfield, but all cyclists know that bum-boils are no laughing matter.

Although I only occasionally get saddle sore, I have been on the lookout for anything to help relieve me from the lower back stiffness and sciatic leg pain that has severely restricted my riding in recent years. After wrenching my neck and back in an accident in 2019, I've found that after an hour of riding my lower back often locks up and I start to get shooting pains in my right buttock and hamstring.

My physio recommended Pilates classes to help me improve my posture and strengthen my core, which has helped keep the day-to-day sciatic pain at bay. When I was offered the chance to try out the SaddleDonut, I was intrigued to find out if it could complement my Pilates exercises and help me ride pain free again by improving my riding posture and core stability on the bike. 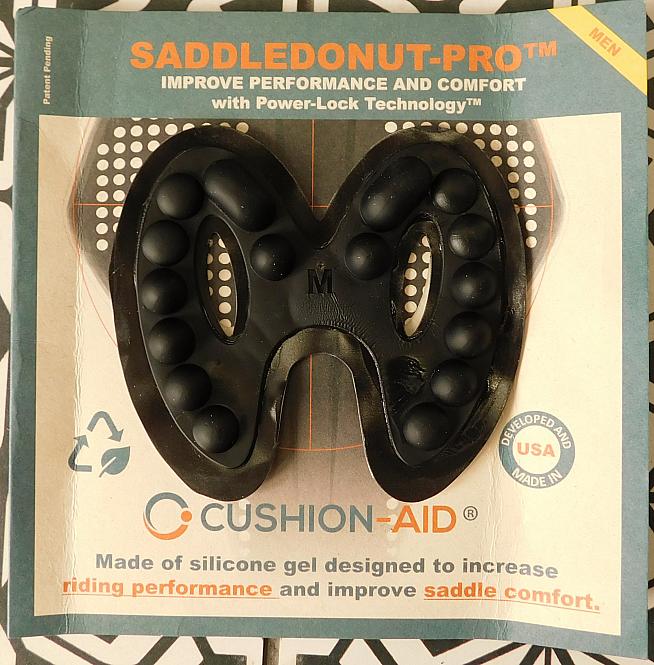 On first appearance, the SaddleDonut is certainly a bit odd looking, and not at all like any donut I'd want in my mouth. Instead, it resembles the sort of fancy face mask worn at those secretive high-society 'Masquerade' balls - albeit a squished up version that you might see an owl wearing in a Disney remake of 'Eyes Wide Shut'.

If the shape is odd however, it's only because it is designed to mirror the anatomy of the lower bones of the pelvis - namely the ischium - which are commonly referred to as the 'sit bones'. 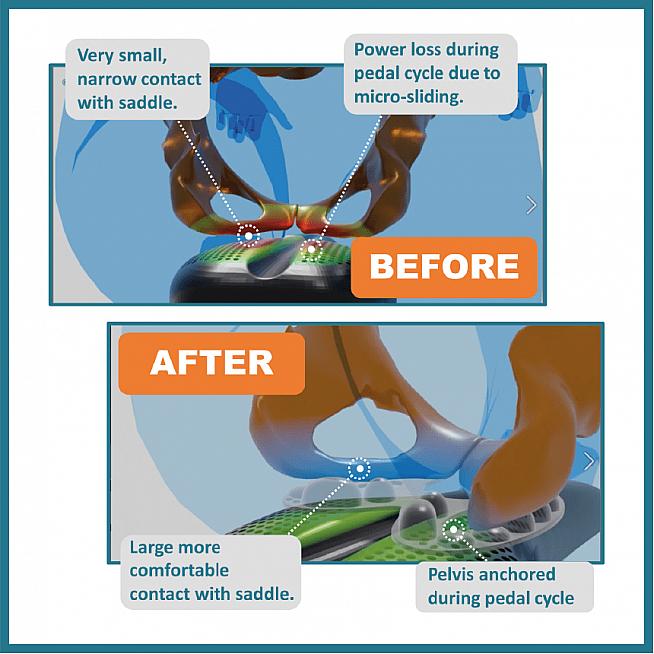 Made of a flexible silicon-gel, the SaddleDonut is designed to be cut in half, and stuck carefully into position on your saddle, so that the eight raised finger-tip bobbles of silicon on each half press firmly against the ischium bones - holding your pelvis from below like a bowling ball being gripped.

Positioning the pads in exactly the right place is therefore crucial, otherwise the silicon knobs on the SaddleDonut will end up pushing into all the wrong parts of your behind, which could lead to greater discomfort or mild euphoria.

Thankfully, comprehensive fitting instructions are provided with the product as well as a step-by-step how-to video on the Cushion-Aid website. Essentially, an accurate measurement of the 'Sitting bone width' is needed, which can be determined by sitting on a piece of corrugated paper that is supplied with the SaddleDonut. 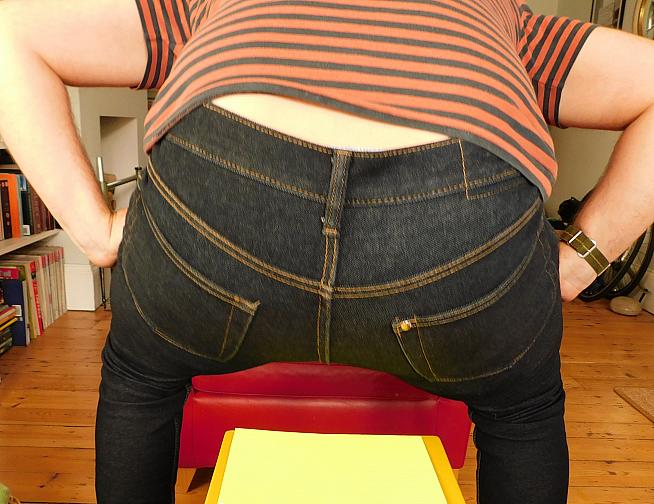 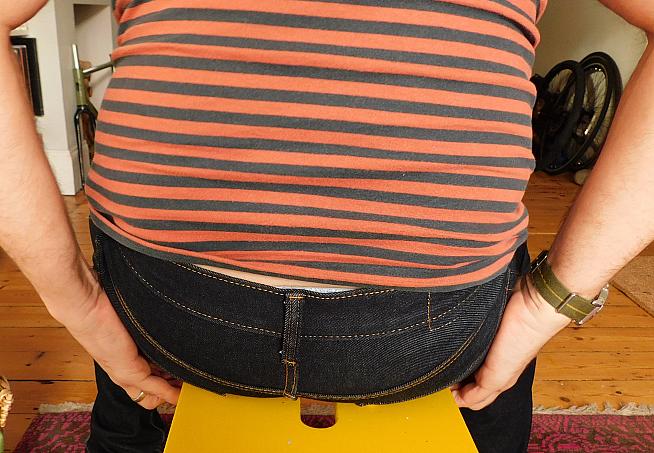 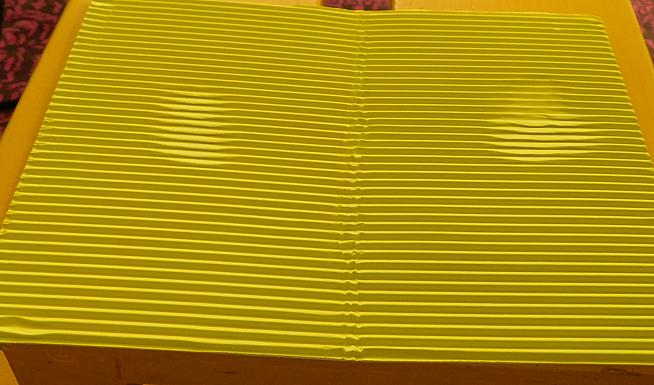 Top-Tip - Like a lap-dancer going for a job interview, you should really grind down hard with your butt to make a good impression. 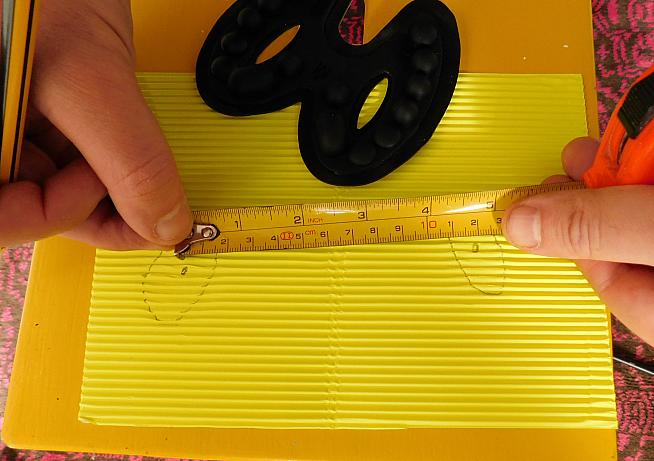 Step 3 - Measure the distance between the mid-points of the two impressions to get your sitting bone width. 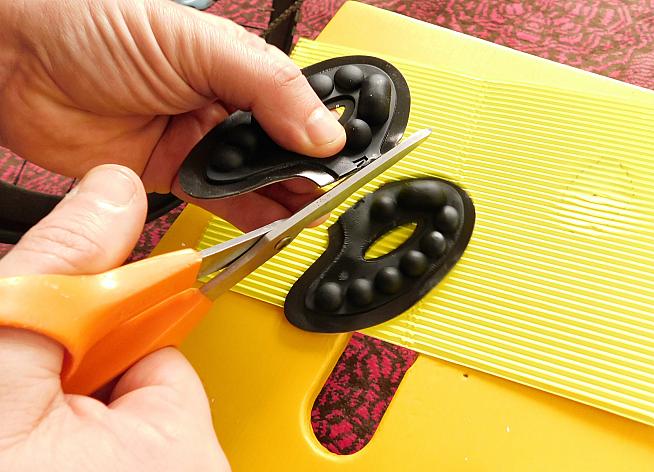 Step 4 - Cut the SaddleDonut down the centre line. 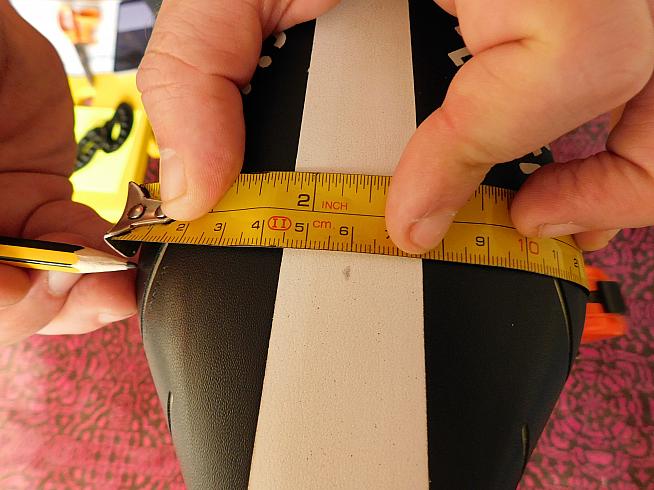 Step 5 - Mark your sitting bone width from the centre of the widest point on your saddle. 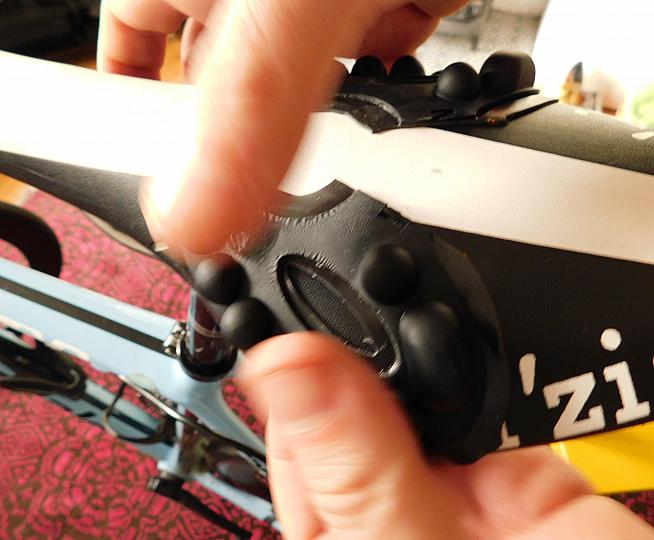 Step 6 - Peel off the protective cover from the self-adhesive backing, and carefully position the SaddleDonut so that the two rearmost round silicone cushions are either side of the sit bone marks made in step 5.

I first tested the SaddleDonut with my bike on the turbo. Although I could feel the bobble-like silicon pads pushing into my behind through the chamois of my bib-shorts, it wasn't an uncomfortable sensation at all. Before long, this awareness of 'something new down there' soon faded from my mind as the discomfort levels of the interval sessions rose.

On the turbo, I tend to slide forward on my saddle, riding harder intervals over the pedals and 'on the rivet' of the saddle. Despite the SaddlePro being there I was still able to slide forward on the saddle, but after each interval I found that the cushioned pads created a firm base against which I could reset my position by pushing back and rotating my pelvis.

Of course, real world riding is very different from riding interval sessions on the turbo. Efforts are more varied; rides are longer; the rider is getting in and out of the saddle more often, and the bike is moving around beneath your body - rocking and rolling from side to side, and feeding back all the variations of the surface and undulations in the road.

Was the SaddleDonut still a helpful aid in the real world, or a hindrance under such conditions?

Well, recently I certainly haven't been on any multi-day riding adventures of the sort that helped to inspire its design, but I can say that for rides of up to four hours the SaddlePro seems to have had a positive effect on my overall riding comfort. When getting back into the saddle, feeling the raised cushions on the SaddleDonut helps to 'guide' your backside back to the correct or optimal position, in a process that soon becomes automatic - in much the same way that your feet just 'find' the right position automatically for re-engaging the cleats in the pedals.

Although you could stick gripper tape to your saddle, like many time trialists do, to stop yourself sliding forward, the SaddlePro won't wear down your bib-shorts. Besides, the cushioned pads do more than just prevent sliding. Like the gel inserts you can add beneath your bar tape, the silicon compound also offers some degree of vibration absorption - soaking up some of the high-frequency road-buzz that the saddle feeds back to the rider on even the smoothest roads. 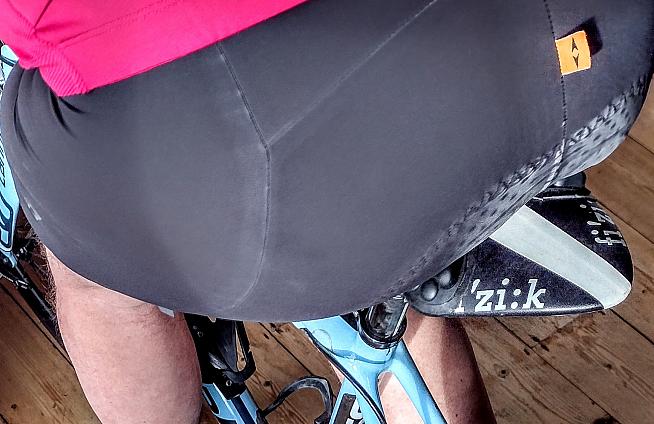 The most important feature of the SaddlePro, for me however, is how it cradles the sit bones and allows me to rotate my pelvis backwards by a few degrees in a supported position. In much the same way that leather saddles mould themselves over time to create a natural hammock for supporting the rider's weight, the SaddleDonut, when set up correctly, gently cups the sit bones, helping them to lock into position so that the rider has a firm core from which to generate power. This, I believe, has helped to take some of the strain off my lower back, which in turn has led to fewer instances of crippling sciatic pain in my buttock and leg when riding.

Of course, I can't be certain that the SaddlePro has solely been responsible for me riding more comfortably in the saddle - it could just as easily be down to the Pilates classes I also started a few months ago; a change in the weather; post Christmas weight loss, or a multitude of unknown factors. But, priced at just $39.00, I'd certainly say it's worth a punt.

The manufacturer claims that you should replace your SaddleDonut every six months. I've been using one for three months now, and although it is unpeeling a little at the edges, it is still stuck firm to the saddle despite being ridden in the rain a few times, and shows no noticeable sign of wear. I'd be surprised if I would need to replace it any more frequently than I do my bar tape, which is every 1-2 years depending on how much riding I do. 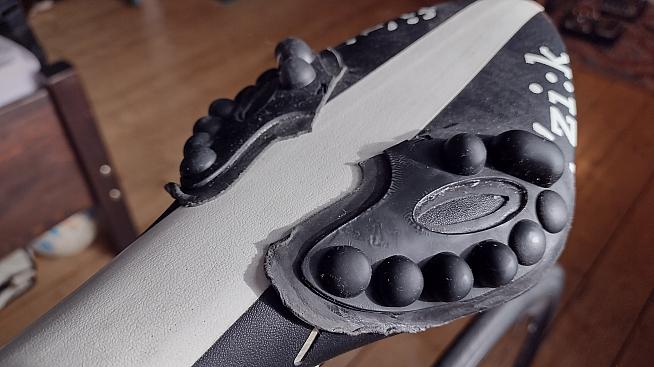 If you're a time-trial cyclist or a triathlete, looking for help locking into your TT position where the pelvis is rotated forward on the saddle, there's a specially designed version of the SaddleDonut which helps to support this position, whilst relieving pressure on the pubis bone at the front of the pelvis.

And, of course, Cushion-Aid have developed male and female versions of the Standard and Tri SaddleDonut in recognition of the very different anatomies of the male and female pelvis.

So, if you're suffering from saddle sore or a dodgy back, before you shell out money on more expensive alternatives (or desperately reach for your pocket-knife like Sean Yates) it might be worth supporting your behind with a little cushion aid by treating it to a SaddleDonut.