So, anyone else ride the Virtual L'Etape du Tour over the weekend?

As something of an historic sportive occasion - the first ever virtual Etape, running alongside the first ever staging of a Virtual Tour de France - I couldn't miss it. In fact, I smuggled my turbo trainer over to Ireland in the boot of the family car especially to take part.

Even so, amid the travel drama I almost managed to miss Stage 1, only signing up for the very last slot at midnight on Sunday.

Still, I made it to the virtual start line and sweated through 59 minutes on the hills of Watopia, along with some 800 other cyclists from around the world.

So how did the Zwift Etape du Tour compare to the real thing?

Ready for the start of the first virtual Etape du Tour.

To be fair, sitting on my turbo trainer in the spare room staring at my phone was never going to compare with the excitement of riding in the Alps with 15,000 cyclists. But, it was ok.

When the ride started at 00:01, there were a few minutes of genuine adrenaline as the hundreds of riders - mostly from the US - jostled for position.

As with a real sportive, the temptation was to go off too hot. I settled into what I hoped was a sustainable power, positioned about a quarter of the way down the field, and held on as best I could.

The course itself was familiar, and most Zwift users will have ridden it many times. A few cosmetic changes had been made to dress it up for the Tour de France, but essentially it was Watopia's Mountain Route: 30.2km with the 683m Zwift KOM climb dominating the parcours.

The climb is a bit of a grind, but nothing compared to the alpine giants you could expect to face on a real Etape du Tour. I rode the Etape "real life" in 2017, where the Col de Vars (2109m) served as an appetiser for a summit finish atop the Col d'Izoard (2360m). Total distance: 178km, and this in the heat of summer, with brake pads frazzled to a crisp before I even began the penultimate descent.

Compared to that - one of my best days on a bike, it should be said - a 20-minute slog up a virtual hill was relatively easy. Not that riding in a darkened room with only the sound of my own panting for company was exactly fun... but on the epic scale, it didn't really register.

Some positives though. As ever on Zwift, there was decent camaraderie among riders with a steady stream of bants and "Ride on" encouragement filling the right-hand side of the screen.

I also managed to set a new PB for the KOM climb, before labouring up the steeper final section.

Settled into a rhythm for the long climb.

On Zwift there's a temptation to freewheel - or hop off the bike entirely - on the descent, but I tried to maintain the effort. Having crested the climb around 250th place (out of 823), I was expecting to be overtaken all the way downhill just as I would be in real life.

But no: in this virtual reality, I was able to cling onto my ranking thanks to a strategy of attacking the few mini-climbs on the descent, and taking hairpins at a wildly unrealistic 80km/h.

After the speedy downhill section there were a few km of flat to the finish line. I used up an aero boost here to give myself a quick breather ahead of the final push for the line.

Unfortunately I then botched the sprint finish, misreading the 1km to go arch as saying 2km to go. As a result I was caught by surprise when the rest of my small bunch suddenly accelerated over the line leaving me in their wake.

Whereas the real Etape will take most riders until mid or late afternoon, the Virtual version was all done and dusted in an hour flat.

Finish line facilities left a bit to be desired - no medals or food, just a pool of sweat around the Wahoo KICKR to be mopped up before heading for a shower and bed.

I was also disappointed not to catch sight of the Didi the Devil balloon trailed in the Virtual Etape's pre event press. The sight of superfan Didii, in full satanic regalia, clutching a bottle of wine on a street corner in Briancon remains one of the abiding memories of my 2017 Etape experience. 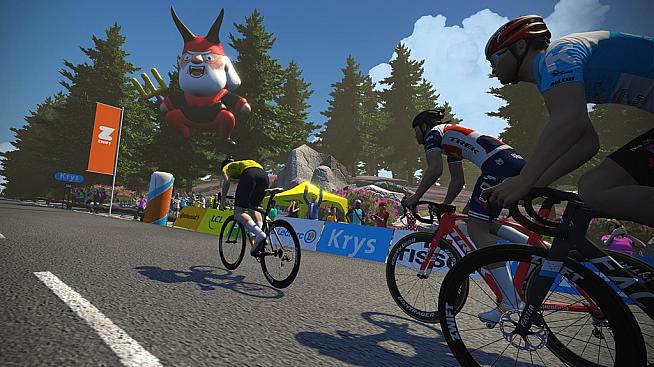 Hopefully Didi will make an appearance in Stage 2.

Not quite the glamour of the actual Etape du Tour then - but that can wait till September, when cyclists will converge on Nice for the real thing.

Still, for a midnight workout the first virtual Etape du Tour was an interesting experience. Stage 2 takes place next weekend on Zwift's new France course, and should offer a little more in the way of novelty.

All being well, I'll saddle up for another go... just maybe not at midnight this time.