What more could you want for a ride than a bit of sunshine, an interesting and challenging route, top food and great coffee?

A mate of mine suggested we ride one of his local events as he's made the effort to head south of the Big Smoke before, so when he proposed the Circuito del Caffe sportive I was intrigued. Not just the chance to ride somewhere different, but the promise of what was on offer: essentially a cycle tour of local coffee shops.

The Circuito del Caffe is brought to you by Allezsportive and the team at Little Italy Espresso Bar in conjunction with Chiltern Rail. This year's edition took place on 23 June. The theme ran along the lines of do a bit of riding, have a decent coffee and food stop, and repeat.

Whether you're cycling or travelling for pleasure or for work, you can't beat a coffee and pastry to help ease the journey. Little Italy Espresso Bar have several outlets, all cannily located at train stations, and the Circuito del Caffe visits most of them. 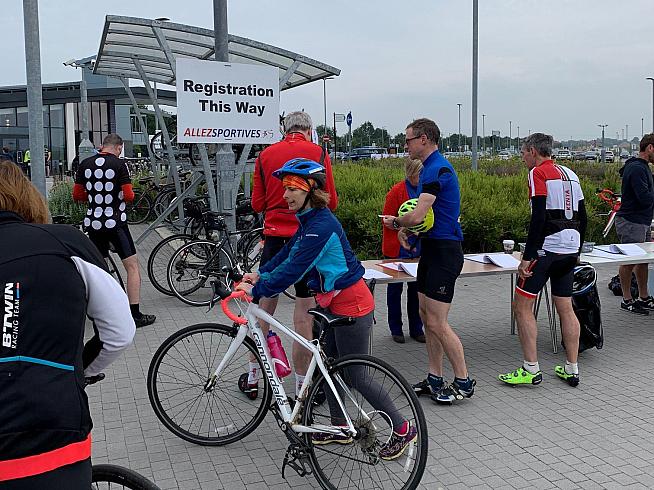 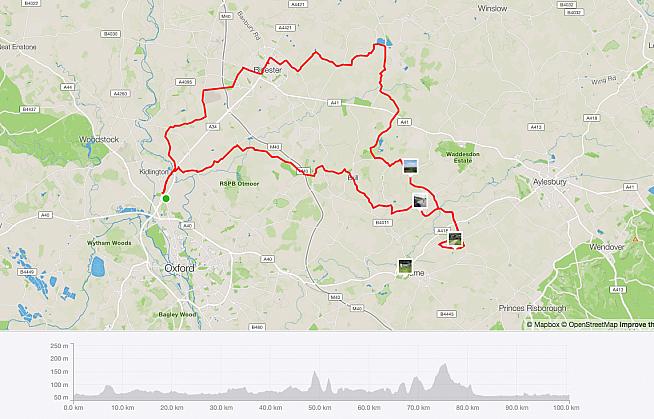 The Doppio route as captured on Strava.

Having negotiated the M25 lottery and come out a winner, no delays, I met my wingmen for the day, Paul and Tudor at the race start, Oxford Parkway.

The obvious benefit of staging the start/finish of a sportive at a large railway station was not just the coffee on this occasion but the ample parking. There was a chill in the air that did eventually lift, but it felt cool and a tad breezy at the start.

Sign-on was nice and easy and after some obligatory faffing we were ready to head out, not quite the last men standing but not far off. Not great. Part of the registration gave you a free coffee, but the question was, do you use it before or after? We plumped for the first option.

The initial sections were gentle on the legs, some scenic parts, not too busy but time to get the aforementioned legs turning. We had plumped for the 60-mile Doppio route, the middle of the three on offer. Nothing to do with my riding partners, but my preference as I had another event the week after so felt I needed to taper.

Leaving the station we headed north through Bletchingdon and Weston On The Green. We were not long into our stride when the first feed station popped up at Bicester. Never one to turn down a coffee, we pulled in. The disadvantage of a cool start is it can play havoc with the bladder so the opportunity to use the facilities at the station was much appreciated judging by the queue.

The feed itself was terrific. Potatoes with a little rosemary, don't mind if I do. If you're not careful the temptation to chat and eat can lose you several minutes so we didn't hang around for long. 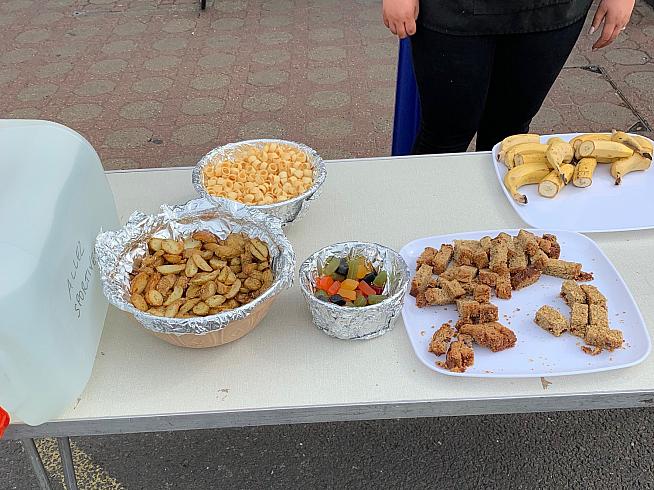 It's not just about the coffee - the food ain't bad either.

Rejoining the route took us east through to Calvert where we turned south. Until now the route had been gently undulating and it wasn't until we reached the village of Wotton Underwood that we began to take on some more substantial climbs. Having had very little climbing we suddenly faced two in quick succession as we skirted round the village of Ashendon. With the extra elevation and the benefit of a clear day, the views were stunning. To be fair to the organisers, the clue was in the name - Cannon's Hill will only mean one thing. You could see for miles, but given that we still had plenty of miles left we reluctantly continued.

We then headed south towards Haddenham, a smallish loop that would bring us back through Cuddington, but not before we visited another coffee/feed stop at Haddenham station. Where it appeared on the route, almost 60km in it was far busier than the first but perhaps even better stocked. As tempting as it was to tuck into the substantial treats on offer, we stuck to snacks; nothing worse than trying to climb with an abnormal load in your belly! 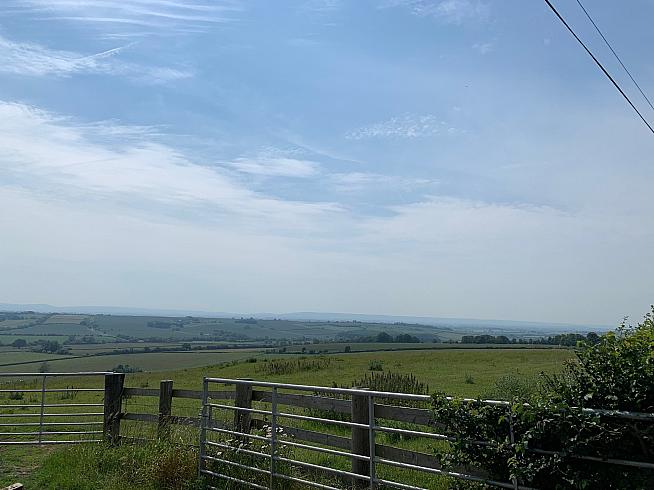 Passing round Aylesbury/Thame airport we were soon heading north back to Cuddington before turning west. The villages were quintessentially English, stone and brick-built cottages, a church and a green, and people clearly spend a lot of time looking after their gardens too, blooms everywhere.

The terrain was definitely more rolling than before, there were also more riders on the road as we began to weave our way back towards the northern part of Oxford. The day's biggest climb was on the approach to Brill. Approaching almost 180m it certainly isn't the biggest hill you will ride up, but placed cannily in the latter stages it will test how hard you've gone previously. 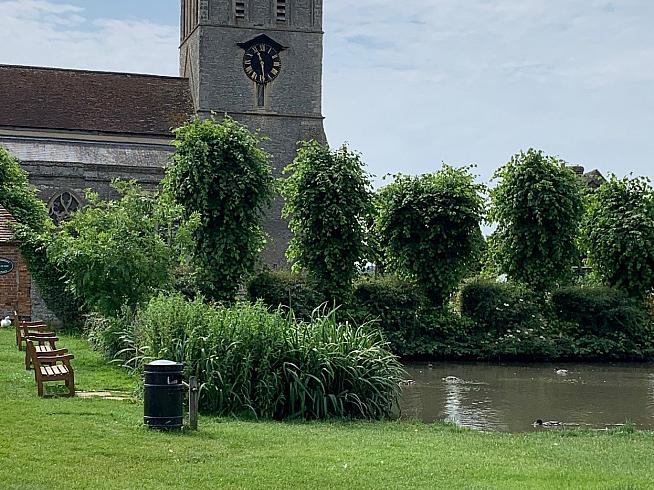 A scenic stop at Haddenham. 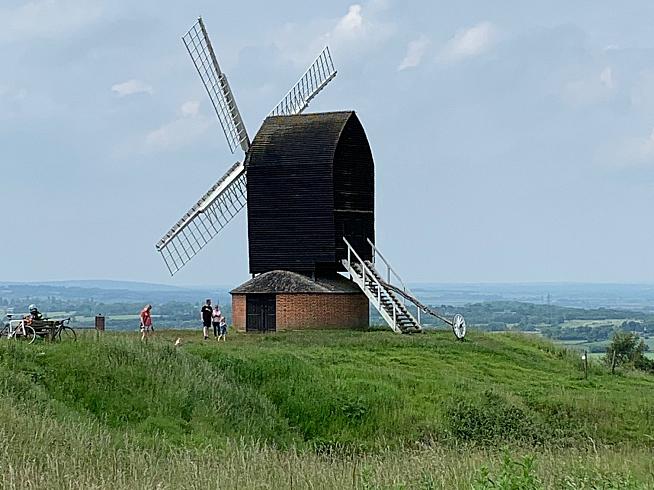 All the best hills have a windmill at the top.

On such a lovely day you almost don't mind when the views are so rewarding. There was even a windmill at the top where we stopped for the obligatory scenic shots and took some groups photos for a local Tri club, including one rider who was very keen to get his new bike in shot.

Turning east through Boarstall and Magnolia Park we crossed over the M40 to begin our approach to the outskirts of the city. The picturesque villages continued to tot up as we eventually rejoined our original route out at Garden City.

The weather always helps on a sportive, and that's down to chance - but add in a liberal dose of a well thought out route, picturesque scenery and top-notch food, and you can't fail but have a great day out.

We certainly enjoyed it, and the chance for a final coffee back at ride HQ. Well, it would be rude not to...

The next event from Allezsportives is The Howler on 22 September 2019. Choose from routes of 90km or 125km through the Chiltern Hills. For details and to enter visit www.allezsportives.co.uk. 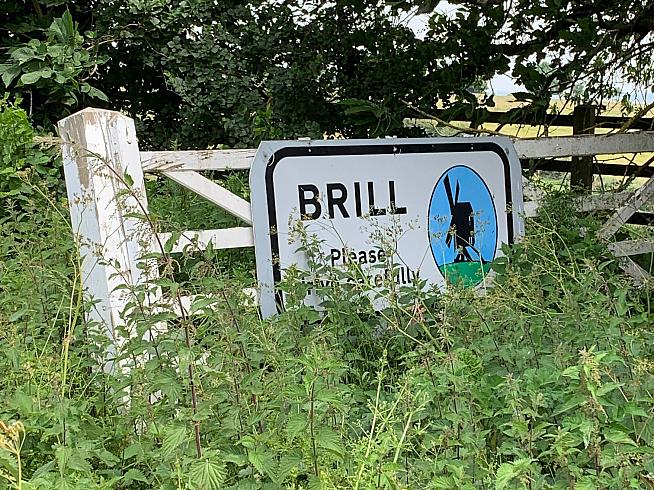