This year the Cyclone Festival of Cycling hosted the national time trial and road championships alongside the usual range of sportives, providing four days of cycling events for everyone from Mark Cavendish to my mum.

Yes, this year I persuaded my mum, aged 71, to ride her first sportive.

The night before the Cyclone challenge rides - four sportives ranging in distance from 34 to 106 miles - we signed on at the Cycle Hub on Newcastle Quayside where the Tyne 6 Bridges leisure ride was underway. When the Cyclone began back in 2007 the aim was to get as many people as possible out on their bikes. The leisure ride, which follows Sustrans routes along both banks of the Tyne, means that families and inexperienced riders who aren't keen on riding in traffic don't miss out.

Back at home later that evening we were checking the final instructions for information about event parking, when I noticed the programme contained an incorrect postcode for event HQ. I made the mistake of mentioning this to my mum.

"I thought you said it would be really well organised. Don't you get bananas or something?" she fired at me, looking sternly over the top of her glasses. "That's the only reason I came."

I scrolled hastily down the screen on my phone. "Feed stations," I read aloud, "...where free energy drinks, bars and bananas will be available." Phew. This seemed to appease her and she returned to reading the Waitrose magazine, occasionally muttering about her fruit-related expectations.

Meanwhile I was left wondering how my explanation of a 'sportive' could have been so vague that my mother had understood it to be an elaborate way of acquiring her five-a-day. 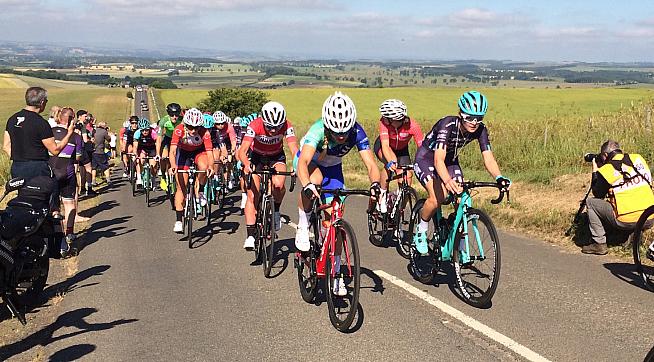 Obligatory picture of the Ryals during the nationals.

It was back in January when I suggested my mum and I ride a local sportive together, as I thought this would motivate her to ride her bike more. Not one for doing things by halves, she went out and bought a new bike and, with her 20% discount from her local bike shop, a pair of sunglasses with interchangeable lenses.

I signed us up for the 34 mile Cyclone route because that was further than she'd ridden for a number of years and there were no significant hills. All of the longer routes include the Ryals, a couple of punchy, steep climbs which anyone who watched the coverage of the national road championships the following day will be sick of hearing about. I wanted her to be able to ride the whole thing and the Ryals were probably pushing my luck.

The ride began a few miles outside the centre of Newcastle and we parked at the event 'park and cycle' a few kilometres away from the start line at the Newcastle Falcons rugby ground. Whilst the start and finish of the ride are on reasonably busy roads, you soon get out onto quieter Northumbrian lanes.

Riders are advised to carry a GPS or a copy of the route map, which was good advice because although there was signage it wasn't always that easy to spot. I think I would have missed a few turns if I hadn't had the GPS. 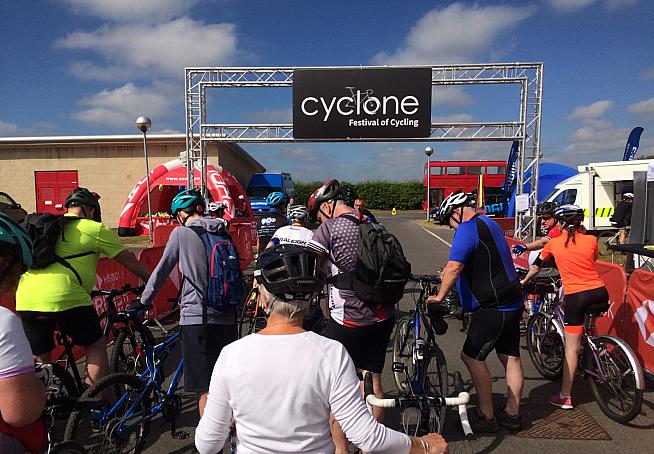 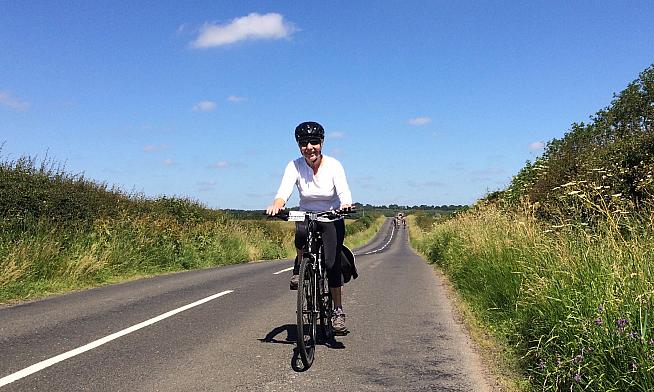 How far to the feed station?

The 34 mile route is as gentle as you would expect for an entry level sportive, with undulation and some less than perfect road surfaces, but no steep climbs. We saw plenty of families out on the course, from the parents bribing their youngsters with jelly babies, to the fathers and sons in matching club kit. My mum set a respectable pace, stopping only when she needed a drink (she can't reach her drink bottle unless she gets off).

By the time we reached the picturesque village of Whalton, where enterprising locals had set up an unofficial feed station to raise donations for the local school, my mum was ready for a snack. Obviously not wanting to dispel her idea of a sportive, the villagers had laid on half a ton of watermelon, which she gamely tucked into. The only official feed station on the 34 mile route isn't until Stamfordham, over two thirds of the way round, and a lot of riders seemed to welcome the early opportunity for a bit of cake and a water top-up.

As we rode along I reflected on how much my mum's cycling has improved since she got her new bike. A few months ago I'd given her a few tips on riding hills, today she was climbing out of the saddle. In the end the Cyclone wasn't really a challenge for her. She'd been out riding so much that the distance was quite comfortable, but having the target of the Cyclone had given her the motivation for all of those rides.

Before long the unmistakable whirr of expensive wheels and flash of well-tanned limbs announced we were approaching Stamfordham - HQ for the national championships the following day - and that plenty of riders were out recceing the route. My mum by this point was less interested in who Team Ribble were and more interested in what was on offer at the feed station. And it did not disappoint. 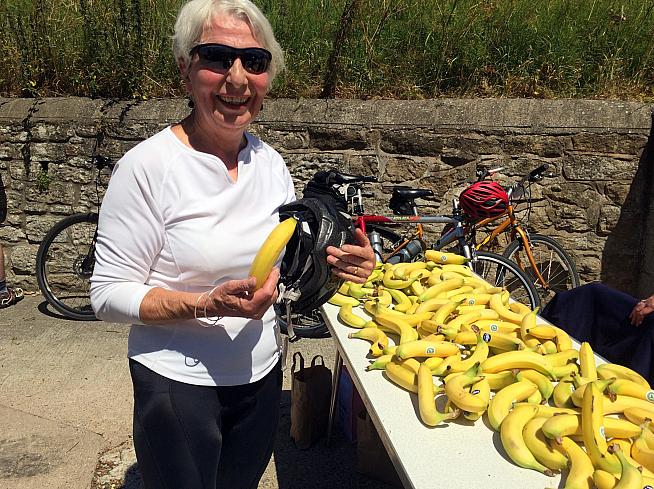 Happiness is a warm banana.

Despite being replete with banana I could tell my mum was getting a bit tired in the last 7 or 8 kilometres as she asked a few times how far it was to the finish, and also because the level of blasphemous mutterings over the state of the road surface increased greatly. I provided a kilometre by kilometre countdown, and before long we were across the finish line and queueing up to register our time. "Not bad for an old git," said my mum rummaging through her goodie bag, no doubt looking for more fruit.

All that remained was for us to retrace our route back to the event car park and this, seemingly, was where the 'challenge' part of the Cyclone challenge came in. Tired riders and temporary road signs pointing in the wrong direction do not make a successful combination and we came across a number of other riders pulling crumpled maps out of jersey pockets, squinting at their GPSs and conferring with one another by the roadside, wondering why the signs had directed them to the A1. 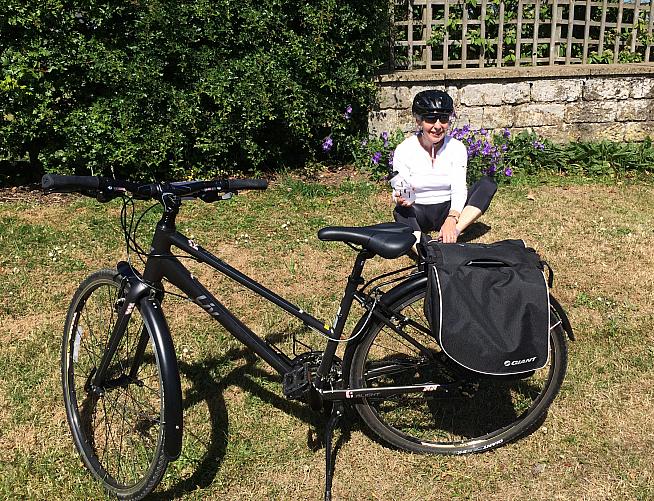 I think we can guess what's in those panniers... 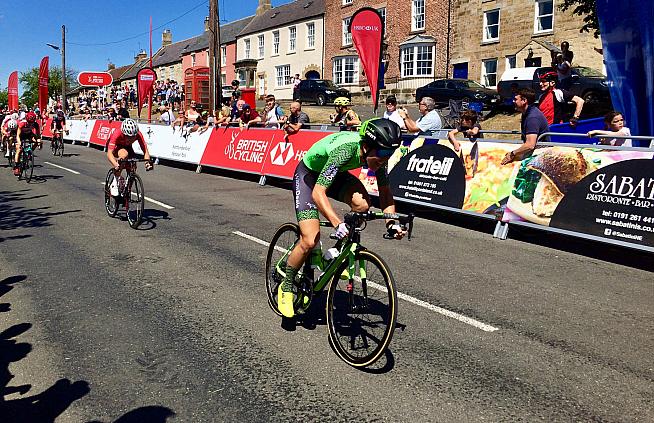 These Cyclone challenge rides cater for a wide range of riders, from families to banana-fixated pensioners to club riders in search of a lumpy 100 mile challenge, and I love the mix of non-competitive rides and elite level racing over one weekend. Better signage to the parking at the end though would have meant more riders finishing the day smiling rather than scratching their heads.

Not that my mum cared, as she chomped on an apple (that I had carefully packed in advance) when we eventually found the car.