The "death wobble" returned to haunt me on the Moor 2 Sea sportive. Not previously seen since the Exmoor Beauty around three years ago, I thought I had slayed the demon but it re-emerged to provide a hair-raising moment on the first major descent of the course. Nothing to do with the way the sportive was organised or run I may add - this one was all my own work.

I had arrived at Exeter racecourse slightly later than anticipated after missing the turnoff in my car. The benefit in being one of the last to arrive was that I was directed to a prime parking spot right by the Start line and Event HQ in one of the on-course meeting rooms. There was a mass cohort of about 40-50 riders already being briefed as I went and registered.

Devon provides a picturesque setting for the Moor 2 Sea sportive.

Luckily there was no queue and I was up and running very quickly. However, by that stage there were only two or three stragglers left to start just before the 9am cut off time and we were allowed to get going without a briefing. The lady at registration had informed me that were about 750 riders signed up for the event.

My delayed arrival, the subsequent rush around to get ready and lack of a "calming" briefing all added up to my feeling a bit discombobulated as I set off. Unusually for a sportive the first major event was an extended descent from the racecourse which only served to produce the perfect conditions for the "Death Wobble".

My technical bike handling skill and balance have never been the best. My younger sister was able to ride before me even though we learnt at the same time and I have never been a confident descender, adopting an unshakeable "safety first" strategy. For the uninitiated the "Death Wobble"is when the front wheel of the bike starts gyrating from side to side on a descent almost unstoppably and seemingly independently of the rider's wishes.

When it first happened to me on Exmoor it seemed to last forever; somehow I never fell off, but the lady riding behind me said it really shook her own confidence just watching me. I did some research after that experience and it seemed that one of the root causes is being too tense on the bike. So I adapted, changed my style, used the drops more and forced myself to relax and in the process consigned the "death wobble" to the dustbin - or so I thought. 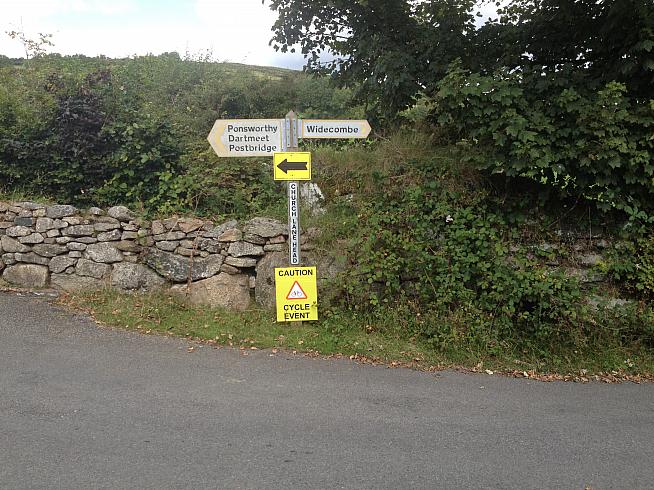 Follow the arrows and keep pedalling. And don't wobble!

Not starting the event relaxed and then also trying to avoid some of the riders on the slower route produced a growing sense of anxiety as the prolonged descent carried on until finally the wobble kicked in. I veered right across the fairly wide country lane trying to maintain my balance. Luckily there were no oncoming cars. My brain said "you are going to fall". I tried to unclip but couldn't. I tried to tell myself to "RELAX" and this might have saved me. The natural reaction is to grip the handlebars tighter but that only makes it worse, so I had eased off the tension enough to come to a halt on the wrong side of the road but still in one piece. I took a couple of minutes to pull myself together before I set off again to enjoy a great ride and also rebuild some confidence.

The sportive was organised by Just Events and I had previously their Taunton Flyer ride on a couple of occasions. This was just as well organised and the combination of coast and moor was a great concept. For the pedants it should actually be called Sea to Moor as the first part was down the coastline through Dawlish and Teignmouth, literally skirting the harbour of one village. Great scenery with the only downside being that there was still plenty of holiday traffic on the first Saturday in September. However, the weather was dry and calm and after about 20 miles the route turned inland to the first feed station a couple of miles later. 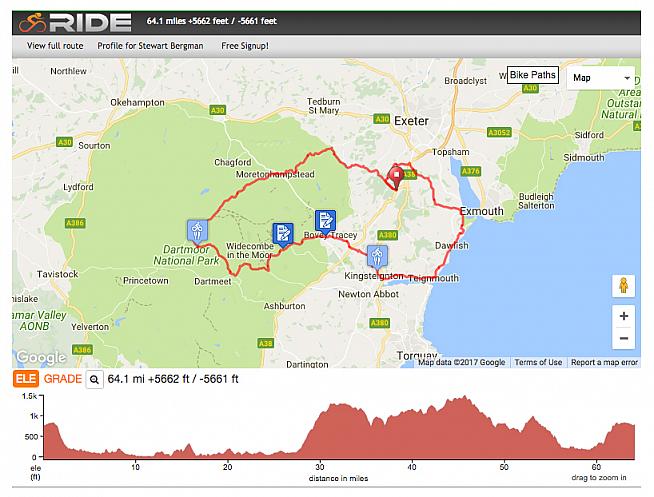 The 65-mile Challenge route skirts the coast before dipping inland for the moors.

After the feed station those on the shortest 37 mile Inspire route took a different course, skirting the bottom of Dartmoor before returning to the racecourse. I was signed up to the 65 mile Challenge course. The longest route was the 112 mile Extreme with riders starting out on that one between 7.00-8.00am. Both of these headed on to Dartmoor towards the challenge of a climb to Haytor around the 27 mile marker which had previously been used in the Tour of Britain a few years earlier

I had held back as much as I could for what was billed as the King/Queen of the Mountains Challenge. The ride manual stated it was a 3.6 mile timed ascent from Bovey Tracey to the top of Haytor. An ascent of 1200 feet at an average gradient of 6%. The organisers had examined Strava and set a time limit achieved by the top 40% of riders which was 26 minutes for men and 32 minutes for women. I assumed the 40% included all the Tour of Britain riders so I assumed I was up against it but gave it my best effort in any event. It seemed tantilisingly achievable whilst almost being a challenge. The prize for success was a KoM or QoM pin badge and entry to a random draw where 12 people received a KoM/QoM cycling jersey.

I got into a rhythm form the start, never venturing "into the red" but just going as hard as I could at my own pace. I had someone following on my wheel but I was focused on my own effort. The start of the challenge was well marked and there were also mile markers throughout and hundred yard countdown markers for the last three hundred metres. I knew when I got to the mile marker that I wasn't going to make the cut but I pushed on and ended up about five minutes the wrong side of success - one of the 60%.

I find cycling Dartmoor always seems to be harder than cycling anywhere else. I don't know if it is anything to do with the roads which can be quite grippy or the constant undulations which have a sapping effect, never allowing you to settle into a real rhythm for long. It can also be exposed and windy but not on this day. The sheep, cows and ponies were out in force around the moor with the highlight being a pony that steadfastly caused a traffic jam by adhering to a stroll down the central white line. 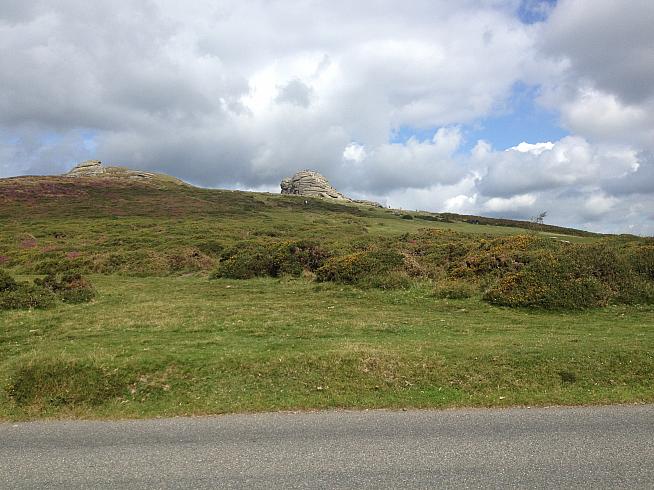 With 50 miles in the legs Dartmoor and Haytor are a bleak prospect.

There were some issues for riders I encountered on route as well. One chap was walking a couple of miles to the next feed station because he had a snapped chain. Another participant, riding his second sportive, had snapped a cleat and so had no purchase on the short but incessant climbs that kept coming.

The second feed station was at a Youth Hostel in Postbridge. For the Extreme riders their extra loop of Dartmoor meant they visited twice. It was suitably stocked with pasta dishes, sandwiches and a great variety of food. No complaints at all.

The time on Dartmoor had sapped my energy reserves. There was a descent back down which went better than my early effort but then two extended climbs back to the racecourse. The first one I ground out slowly but by the last one I was running on empty. Tiredness meant I missed the turning for the racecourse for the second time that day, although it only cost me a handful of metres. 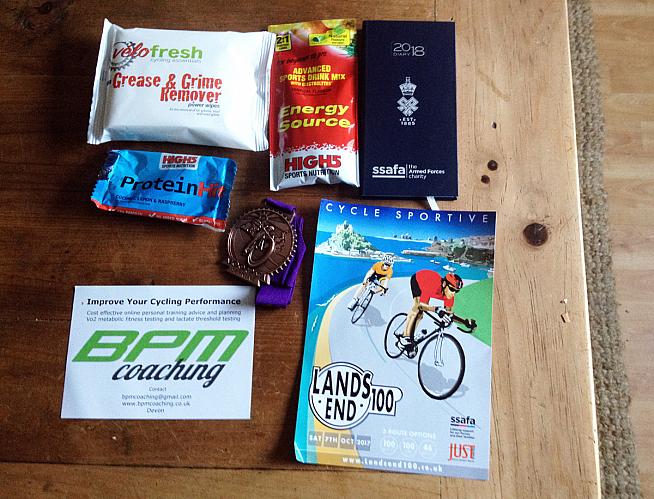 If the views aren't reward enough there's a goody bag at the finish.

When I did finish the timings were instantly available and I picked up my bronze medal and goody bag. It contained some flyers, a protein bar, grease and grime remover power wipes, a High 5 drinks mix, 2018 diary and an advert for Just Events' next sportive: the Land's End 100 on Saturday 7th October with routes of 46 miles, 100km and 100 miles.

Prices for the Moor 2 Sea were £7 for the two longer routes and £27 for the Inspire route with a £5 surcharge for on the day sign up. It was definitely a challenge, albeit an exhausting one for me - probably not helped by too much adrenaline from my early escapade...